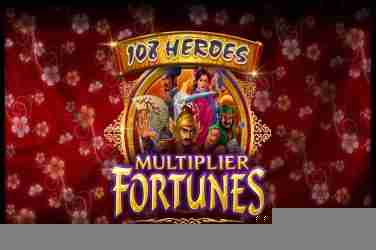 108 Heroes Multiplier Fortunes slots title is something of a mouthful yet the game itself has a simple format that can be easily grasped and is based on a Chinese Folk Tale dating back to the 14th Century.

microgaming have previously released an online game with the same Asian theme 108 Heroes Slot, which has 5 reels but this design has just 3 and looks reminiscent of a more traditional fruit machine and contains 9 different ways to win.

The 1st and 3rd reel are framed in silver while the 2nd is slightly larger and has an ornate gold edging. It is this central reel that is the key to the Bonus Feature that has been included in the game to provide an additional bit of fun during play. All 3 reels are set upon a rich red background that is littered with pretty flowers with the games title and Hero images sitting to the right of the screen.

It is possible to locate this slots game via a PC Desktop, Tablet and html5 Mobile device. This allows players the chance to join these Heroes for some fun while they search the reels for Wilds, Multipliers and the Re-Spin Feature which can give a potential win of over 2136x their stake.

Sets of 1x, 2x, and 3x Bar symbols are used in this online slots game along with some Lucky 7’s. They have all been designed in bold colors and look striking upon the screen when they land in position. These appear often and reward players with small wins when included in a structured pay line to increase on their initial stake.

Wild – all 4x of the Heroes are Wild symbols in the game and each has their own detailed design which are then circled in a frame of Oriental block lettering of different colors. Not only can these change the Basic symbols if there is the opportunity to generate a win they also come with their own Multiplier. So players can receive 2x, 3x, 4x, and even 5x the allocated amount should the relevant Wild be used in a winning combination.

Re-Spins Bonus Round– this part of the 108 Heroes Multiplier Fortunes slots game becomes activated when 2x or more Wild symbols land on the central reel. Now players will see this lock in place while the other reels are allowed to Re-Spin 1x more time. Any winnings that are rewarded are now doubled which means that players could receive up to 10x their stake if the reels land in their favor.

There are 9 different pay lines to be found in this slots game and wagers can begin at just 0.15. However for those with a larger budget they can place as much as 37.50 by using the +/- button before hitting to Spin and setting the reels into action. This means that it has proven popular with both high and low rollers since its release in September 2017.

Not much imagination has been used in this games format however and there is a significant lack of Bonus Features. So for some regulars to online casinos the fact that there are no Free Spins, Progressive Jackpot or Mini-Games to enjoy may deter them from joining the game.

Yet despite this it is still a fast paced game with the Multipliers being the real Heroes by offering up to 5x/10x the wagered amount. Meaning that they can reward players with a decent Fortune for them to claim when included in a structured pay line.

For those players who either need to be away from the screen or prefer to be less interactive with the software there is an Auto Play option. Players will find the button on the Control Panel at the bottom of the screen and it gives various settings for them to choose from. This means that the reels can be allowed to spin for a certain amount of times or the game will end once the maximum wager has been reached.

Considered to be a Low to Medium variance game this latest release from microgaming has a RTP of 96.50%. So the 108 Heroes Multiplier Fortunes slots game is still enticing players from around the globe who enjoy the Oriental theme and its entertaining music and sound effects.

108 Heroes Multiplier Fortunes is a 3 reel, 9 pay lines, video slot game from microgaming software. It has an Asian theme, and the game features, Stacked multipliers re-spins and a maximum jackpot win of 666x your wager.