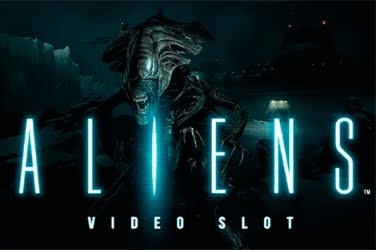 Aliens slots have been designed by Net Entertainment while working alongside 20th Century Fox. As is often found with their collection of online casino games this is one sure not to disappoint players.

The Aliens slots game is inspired by the 1986 film which starred Sigourney Weaver. Directed by James Cameron, Net Entertainment have taken elements of the movie to use in this online offering.

A dark night sky can be seen behind the 5 reels of the Aliens slots game. Designers have then used electric blue color for the frame and to highlight the control panel at the bottom of the screen. There is a dark moody feel to the game which is enhanced by the tense composition that can be heard in the background.

Aliens slots not only provides a base game, but there is also a Mini-Game which has a total of 3 levels. During this part of the game, players have a quest as a marine to kill all the aliens. So players can enjoy this unusual twist to the game and take advantage of all the Bonus Features available.

The symbols used in the Aliens slots game are all of a high 3D quality. When each Bonus Feature is triggered they will become animated on the screen. A factor which adds to the atmosphere of the game. Each symbol depicts a different scary Alien or unhatched Alien Eggs. All of these will award the player with a random cash prize to be added to the jackpot balance.

There is a Wild included in the Aliens slots game which is shown as a Weyland-Yutani symbol. When the symbol appears anywhere on the screen it is able to be included as part of a winning pay line to add to the cash figure.

It is the additional Mini-Game which adds to the fun of the Aliens slots game. Level 1 of this element of the game is called The Search. After each winning spin, the number of symbols that created the pay line will be added to a Multiplier Meter at the top of the reels. However, this will not occur if a Wild symbol has been used. When the meter is full the player is taken to the next level.

Level 2 is referred to as The Enforcer Round. At this point, each spin will result in a guaranteed win, the amount of which will depend on the symbols collected in the Multiplier Meter. Then players take on the role of the marine and the screen appears as if looking through a camera on the helmet. Creeping through dark corridors and shooting every alien that is encountered. This level of the Mini-Game will continue until all the ammunition has run out, or until the player is moved up to the 3rd level.

The Hive is at Level 3 of the Mini-Game in Aliens slots. Now the player will be shown two horizontal reels. The first is a Grenade Strength Meter, the second a Grenade Multiplier Meter. These amounts are then used as a Free Spins Bonus Round is activated.

There are 5 Free Spins awarded to the player in the Aliens slots game. At this time grenades are fired at the Alien Hive until the spins have finished. The higher the grenade meters were, the more damage that will be caused.

Once the grenades have been used the player can watch as the marine fires a gun at the Hive if it hasn’t already been destroyed. There are 4 rounds of ammo available to players but once they have gone it can be one of two things. Either the Mini-Game is over due to lack of ammo, or the level will be complete and the mission accomplished.

The coin denomination used in the Aliens slots game has been set to a varied figure. For those who only wish to make a small wager, they can place just $0.01 on each of the 15 winning paylines. However, for those who are high rollers, this can be increased to $10.00, although only one coin can be placed on each line.

While the 5 reels of the Aliens slots game spin each win will result in adding to the Multiplier Meter. This is an important element to the game’s design and helps players to reach higher levels of the quest they have been given.

Should players be lucky enough to complete their mission of killing the Alien Queen and destroying the Hive they can be awarded up to 240x their initial wagered amount. This makes this online casino game popular with players of all levels who enjoy the Aliens movie theme.

Game play of Aliens slots may prove confusing to beginners and those who prefer a more basic outline. However the gripping storyline and absorbing feel can have gamers enthralled for hours. 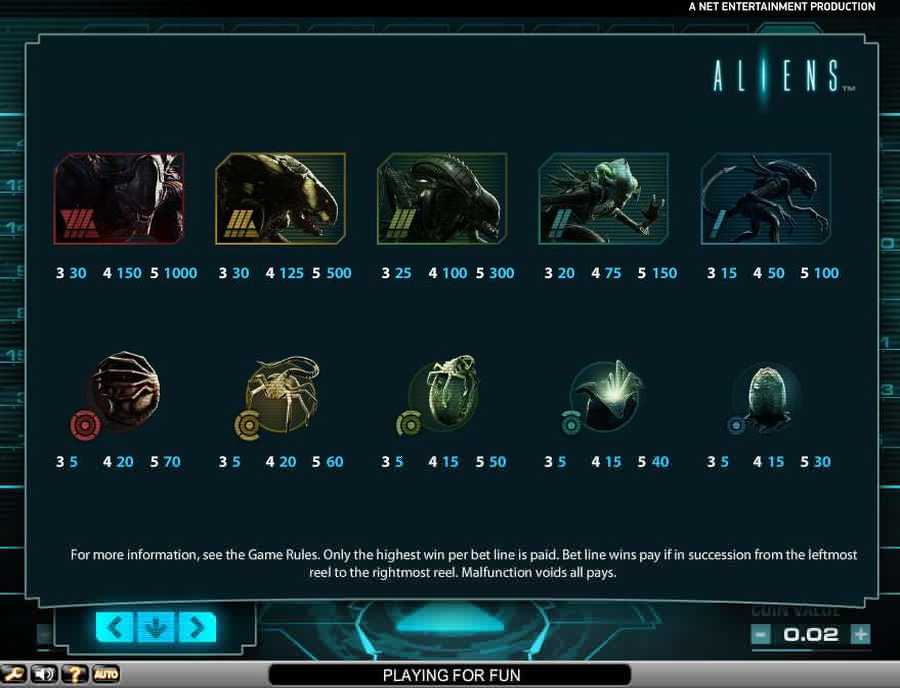 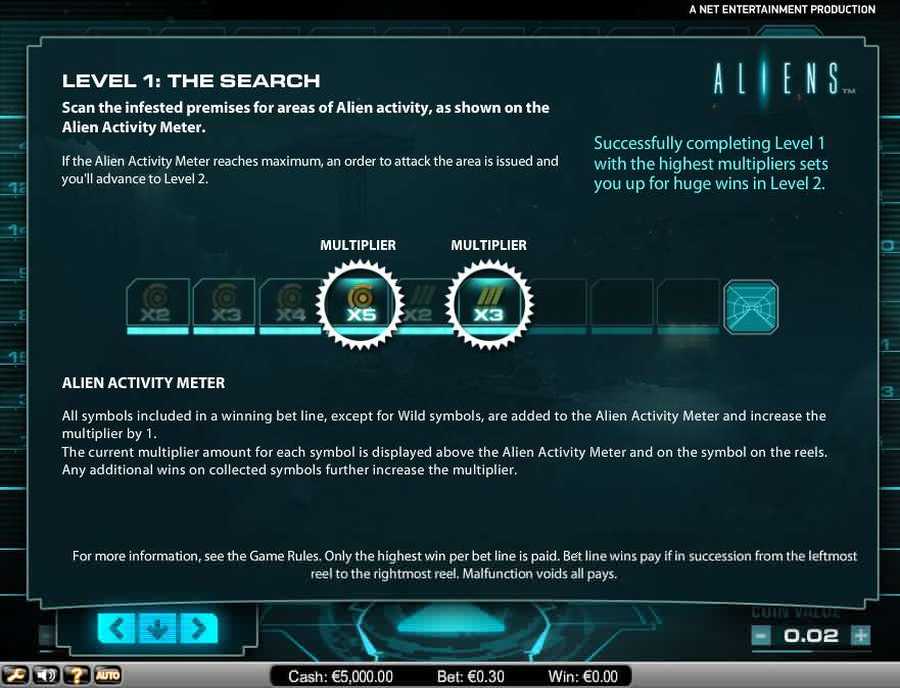 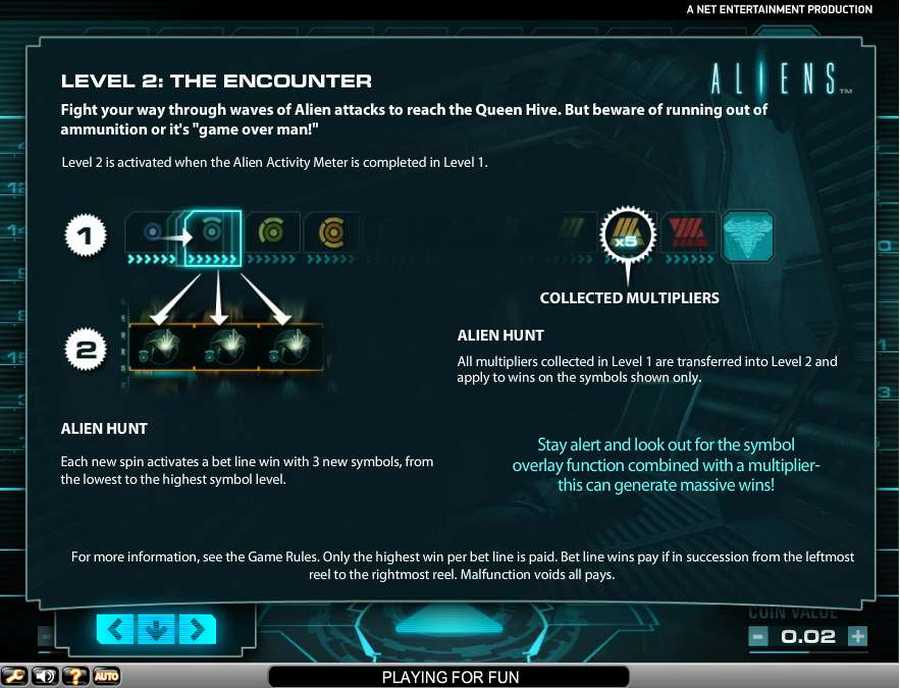 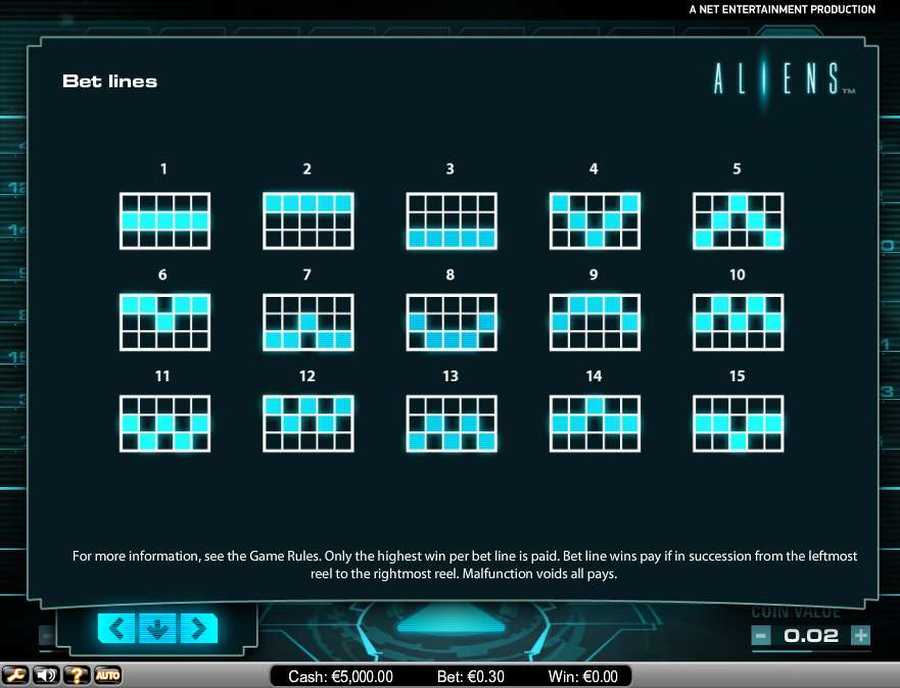 Aliens is a non-progressive 5 reel 15 paylines 3D video slots machine from net entertainment, it has a Aliens theme, and comes with a multiplier, wild symbol, free spins and has a maximum jackpot win of $10000