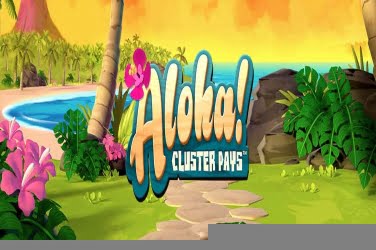 Net Entertainment has used a different approach in the design of Aloha slots. Rather than the usual 5 reels, there are actually 6. Another twist is that there are no fixed pay-lines, instead, the Aloha slots game has a Cluster Play mechanic.

This means that players need to create a “cluster” of at least 9 matching symbols across the 6 reels to receive a cash prize to be added to their winning amount.

Aloha slots take players on a journey to a tropical island in this Hawaiian themed game. The reels are central in the screen with a beautiful scene in the background. Beneath a sunset sky colored in reds and oranges, there is a sandy beach with palm trees in the distance. To the left, there is a volcano which erupts each time a player creates a winning cluster.

On the right of the screen, players can see a large grinning Tiki Mask with a Purple Gem in its crown. This is also animated and offers players with an encouraging smile during the game of Aloha slots.

As Aloha slots are playable on all devices people can enjoy the fun atmosphere which has been created in the game wherever they are.

The designers have used high-quality graphics when creating the symbols which are used in the Aloha slots game. Players will find a Pink Flower, a Pineapple, Half a Coconut, and a Shell.

However, it is the 3 different Tiki Masks which provide players with higher reward in the Aloha slots game. They are colored in Green, Red, and Blue with a coordinating gem in the crown. Each Mask is pulling a comical expression, which adds to the fun element of this online casino game.

The Red Tiki Mask is the highest paying symbol in the Aloha slots game. When players have filled the screen with 30 of this symbol a 10,000 jackpot is added to the final balance.

After each win, a Sticky Win Re-spin Feature can be randomly awarded to the player. All winning symbols will remain in place while the others will spin in the hope of adding to the cluster. This round continues until there are no more matches, or if the screen becomes filled. It is an added Bonus which can provide players with more chances to increase their winnings in the Aloha slots game.

In addition to this, there is a Substitute symbol included in the Aloha slots game. If one is found on the game’s reels it will change to match an adjacent symbol. This can either add to an existing cluster or help to create one.

There is a Free Spins Feature included in the Aloha slots game. This is activated when the “Free Spins” Scatter is located on the 6 reels. 3 symbols award 9 spins, rising up to 12 if all 6 appear.

It is also possible to add to the players Free Spins balance should they spin further symbols during this Bonus Round. 3 Scatters allow an extra spin and an additional 1 is given for each above that amount.

While players take advantage of the Free Spins they will also find a Symbol Drop Feature which is included in the Aloha slots game. Here lower paying symbols are removed to provide players with more opportunities to add to their cluster and increase their final payout figure.

When the last Free Spin is taken and it doesn’t result in a win, the Bonus Round will continue until a matching symbol is found. This is another Feature which is appealing to players of the Aloha slots game.

Designers of Aloha slots have provided players with an alternative format in this release from Net Entertainment. It shows a screen with 6 reels but rather than the usual pay-lines players are required to create “clusters” of matching symbols.

A cluster is begun when 2 matching symbols appear alongside each other either vertically or horizontally. As the symbols are stacked across the reels winning amounts can easily be increased with further spins.

Players can wager anything from $0.10 to $200 in the Aloha slots game. Payouts begin when 9 or more matching symbols are revealed. This can be added to if further symbols are found in later spins.

In addition to this players will find up to 60 Free Spins on offer, a Sticky Win Re-spin Feature and numerous other ways to add to their balance.

Providing a fun and engaging game, players of all levels can enjoy Aloha slots 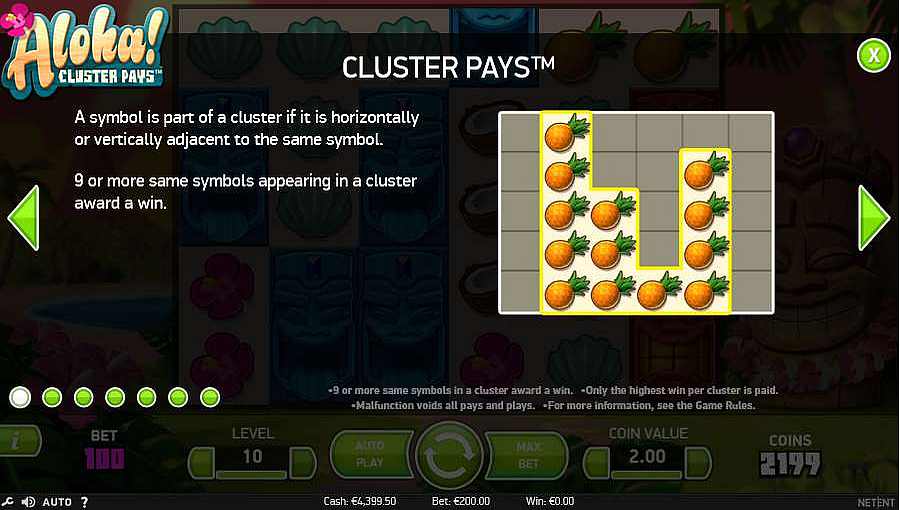 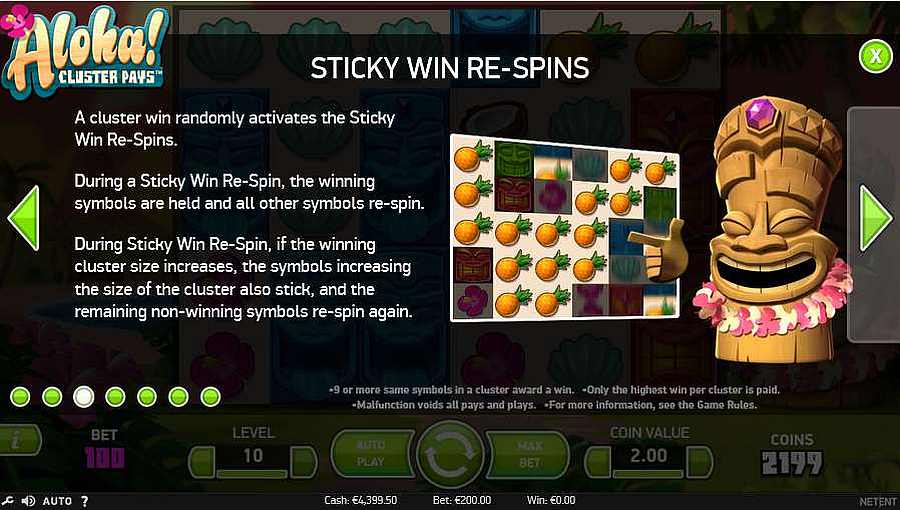 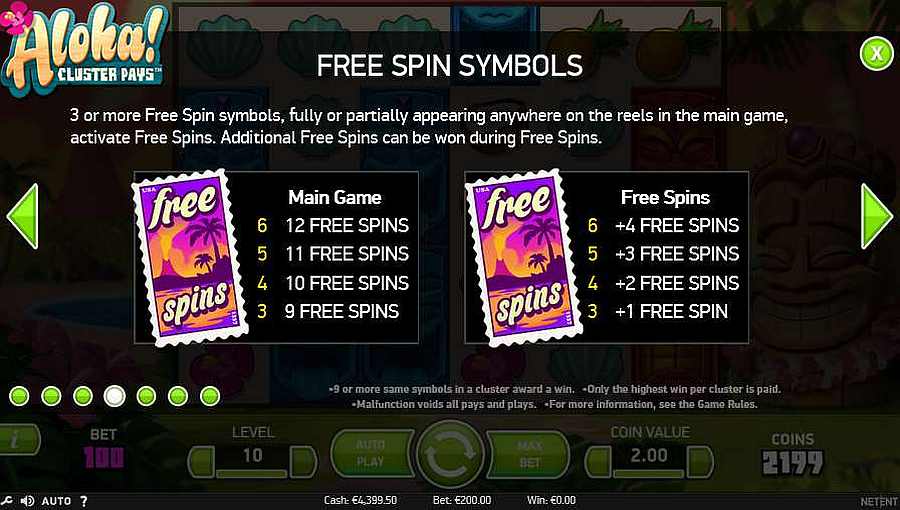 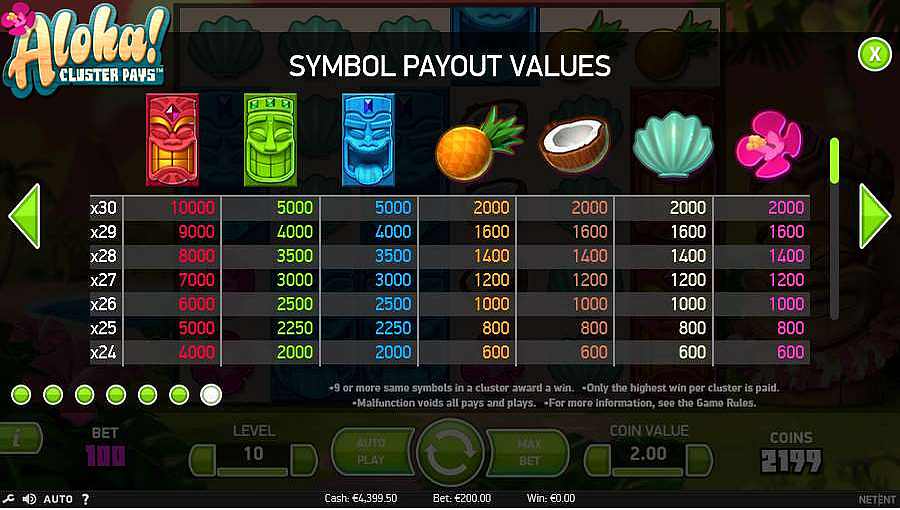 Aloha! Cluster Pays is a 6 reel 10 paylines video slots machine from net entertainment, it has a Hawaiian theme, and comes with a wild symbol, scatter symbol, free spins and has a maximum jackpot win of 100000 coins