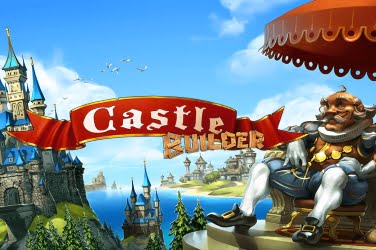 First released in January 2015, the Castle Builder slots game was developed by Rabcat. It was commissioned by the Microgaming company, to be added to their online casinos for players from around the globe to enjoy.

The Castle Builder slots game has a complex story-line, which make it an exciting game choice for enthusiasts. The player takes on the role of a castle builder, constructing various objects that the Princesses have requested. Once the castle is complete, they are moved up to a higher level within the game.

This is a 5 reel slots game, which has 15 different pay lines. This can help players to create many winning combinations to increase the final pay-out that they will receive.

Symbols that are found within the reels of the Castle Builder slots game are cartoon images with a detailed design. You can find a King, Queen, Prince, and Princess. Along with these, you will also see a sack of gold, a casket, treasure chest, and a locked door.

A Wild symbol can also be found when playing Castle Builder slots. This is shown as an Old Builder and can be useful in creating winning pay lines.

The main symbol that you need to spin while playing Castle Builder slots is the building icon. These are depicted at various levels from standard, rising to bronze, silver and then gold.

The main feature of the Castle Builder slots game is to build the castle upon each of the four levels. These levels are named Forana, Ethril, Ilrian, and Empire. Once the castle is built, you are progressed to the next level.

As winning paylines are found, the castle will receive an additional building block to aim toward its completion. This also activates an additional bonus round feature. At this time the player is required to match one of the 3 Princes to the Princess. The pay-out that is awarded will depend on the choice that is made.

To complete a castle takes a total of 11 building blocks, meaning that this bonus game can be played often. Any winnings that are generated during these games are gathered to create a higher pay-out figure for the player to claim.

There are no Scatters, Free Spins, or Multipliers to be found during gameplay of Castle Builder slots. However, there are Wilds which are stacked upon its reels. These Wilds replace any symbol, other than the building icon. The Wilds are able to help to increase the jackpot that the gamer can claim at the end of a play.

When playing the Castle Builder slots game, you are asked to use coins of values ranging from $0.01 to $1. Bets can be placed across any of the 15 pay lines on offer, with a maximum wager of $15 on each spin.

Any player is ultimately aiming to build the castle for the Princess while taking advantage of the additional bonus round feature to increase their winnings. Yet, with the different progressive levels, it can prove to be an enticing game to play.

The main set jackpot that can be won when playing the Castle Builder slots game is 20,000 coins. This will be awarded if there are either 5 Wilds or 5 Locked Doors icons shown across one of the winning play lines that are activated during the game.

If either 2, 3, 4, or 5 building symbols are spun during Castle Builder slots this will impact upon the progress of the castle build. They are shown in different increments, ranged from standard to gold. The higher the symbol shown, the further the castle moves ahead. Bringing you closer to completing the level of the game.

Although it has a non-progressive jackpot, Castle Builders slots can provide up to 15 winning paylines across its 5 reels that gamers can benefit from. Providing hefty pay-outs during the main Castle Builder game, and once the castle is completed, this online casino game is fast becoming popular among slots enthusiasts. 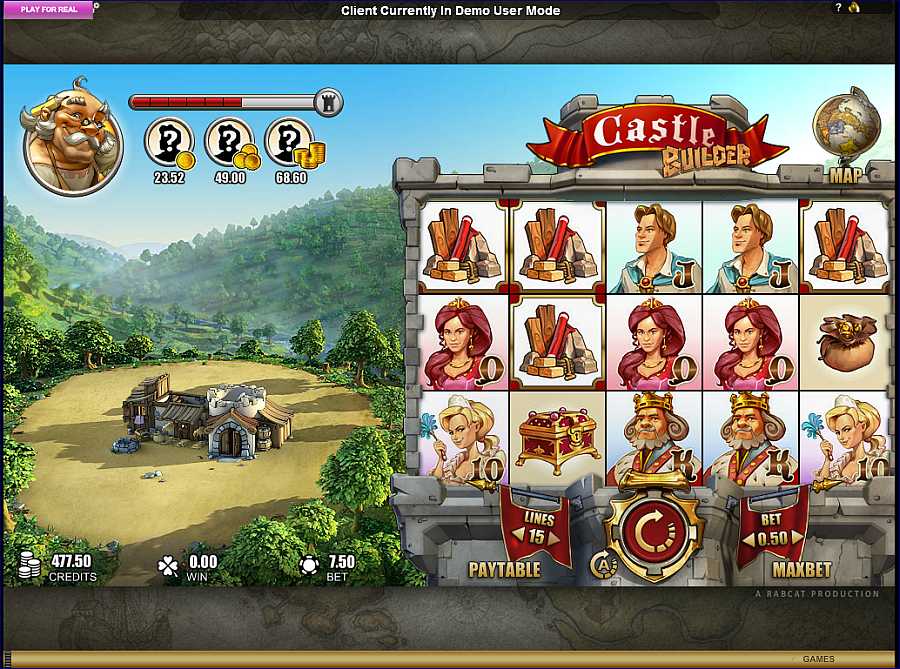 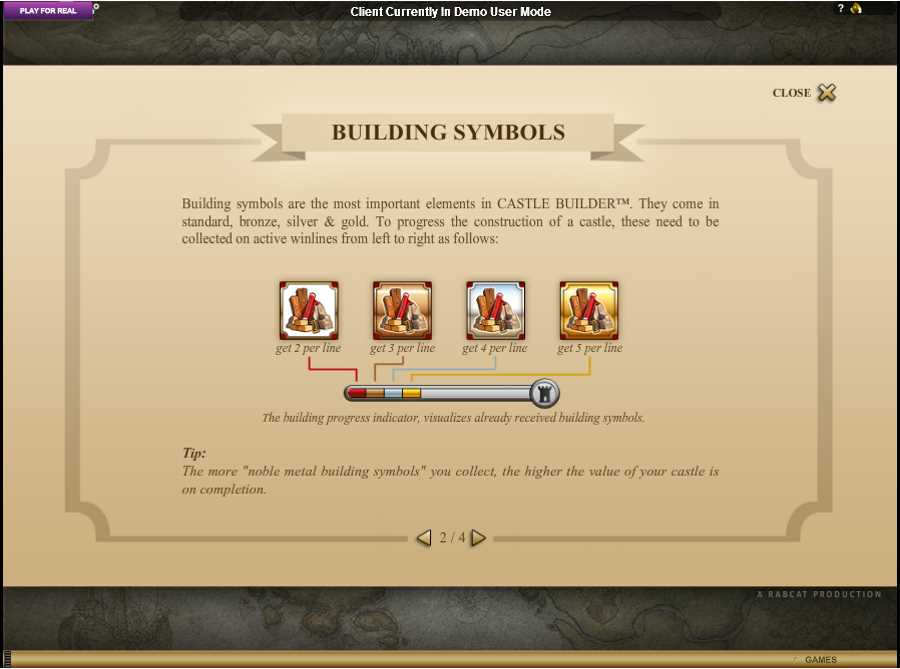 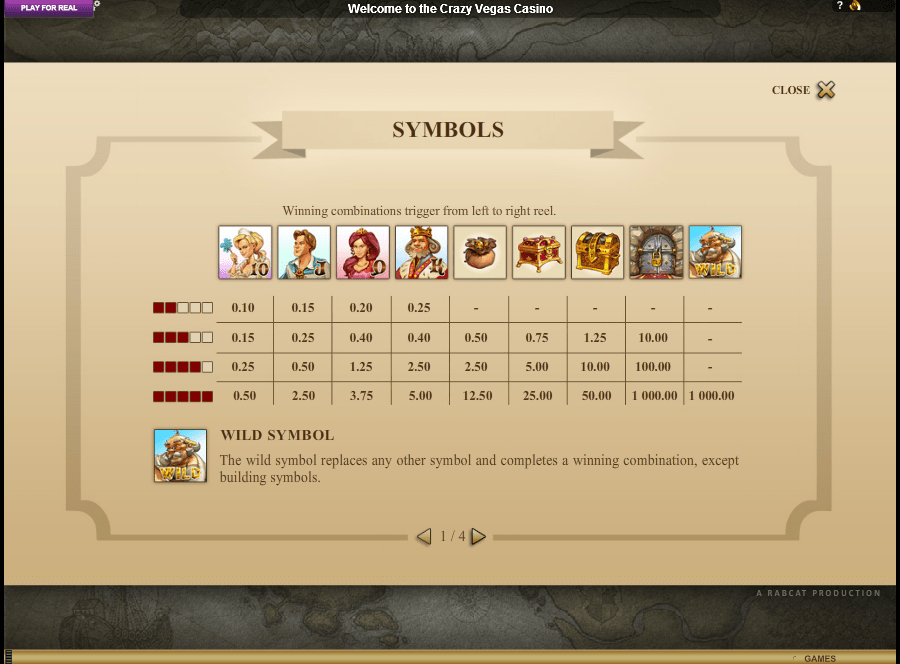 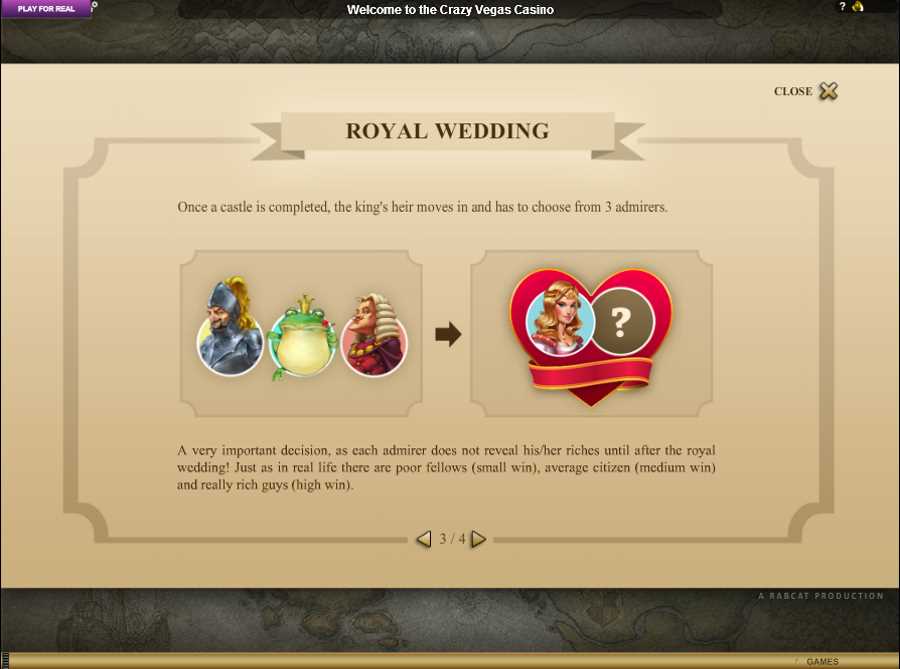 Castle Builder is a non-progressive 5 reel 15 pay line video slot machine from Rabat, it has a Medieval Fairytale Cartoon theme, and comes with a wild symbol, and has a maximum jackpot win of $121,270