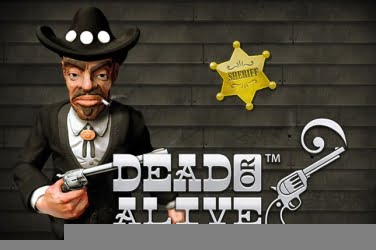 Players can travel to the Wild West in 20th Century U.S.A when they visit the Dead or Alive slots game. It is based on the outlaws of this era, such as Billy the Kid and Jessie James. Here they will find the 5 reels set within a wooden noticeboard, with various items such as spurs and bullet holes on either side.

To add to the cowboy atmosphere players can enjoy the sound of a saloon piano and random gunshots in the background throughout the game.

Dead or Alive has been released by Net Entertainment to be included in their various online casinos. There are 9 paylines to be found across its 5 reels which provides players with various opportunities to create a winning combination. All winnings are collected and players can view their jackpot balance at the bottom of the screen.

There is a 10, J, Q, K and Ace symbol included in this video slots game. Although the higher paying symbols include a 10 Gallon Hat, a Glass of Whiskey, a Sheriff’s Badge, a Cowboy Boot, and a Gun in its Holster.

A Wanted Poster is used as the Wild symbol. There are 5 different characters as part of the game including Jesse James and Billy the Kid. When they are located on the 5 reels they are able to change other symbols besides the Scatter. This can help to create more winning combinations for the player to add to their jackpot balance.

The Scatter symbol is shown as a pair of Crossed Pistols. When 3 or more of these appear the player is awarded with 12 Free Spins and any winning amount is given a 2x Multiplier.

During the Free Spins Bonus Round players can benefit from a further Feature with the Sticky Wilds. Should a Wild symbol be spun they will remain upon the reel until this Bonus Round has ended. Not only does this provide more chances to reveal a winning payline but also adds a further 5 Free Spins to the players balance to take advantage.

So if the player has a lucky streak, they are able to maximize on their initial wager substantially in this offering from Net Entertainment.

Before the Free Spins Bonus Round begins there is another addition to the Dead or Alive slots game. The cash prize that is given to the player is dependent on how many Crossed Pistol Scatter symbols were revealed during the spin.

For example if 3x Scatter symbols are spun then the player will be receive a 4x Multiplier on their initial wager. However this rises to 2500x should the 5 reels be filled which can provide players with a substantial return on their betting stake.

The coin sizes used are kept low to ensure that it appeals to both low and high rollers. They range from 0.01 to 0.50 and players can choose from 4 different betting levels. This means that the minimum amount that can be wagered is 0.09 while the maximum is 18.00 on each spin.

Though there are only 2 Bonus Symbols available, they provide players with numerous chances to increase their initial wagered amount. The 1st is a Wanted Poster showing 1 of the 5 different characters that the game has and acts as a Wild Feature.

Not only does this symbol change others in the base game but is also a Sticky Wild in the Free Spins Bonus Round and award additional spins for the player to take advantage of. So it is when the 2nd Bonus Symbol is located upon the reels that players will get the most rewards with this particular online casino release.

A symbol showing a pair of Crossed Pistols is the Scatter Bonus. When 3 or more are spun a Free Spins Bonus Round is activated. During this point in the game players can also benefit from Sticky Wilds and a 2x Multiplier.

Players can take advantage of the Auto Play Feature which Net Entertainment have included. Providing them the chance to leave the reels to spin automatically while they sit back and watch their winnings mount.

Dead or Alive slots is a high variance game. This means that although there may be 9 winning paylines they will not be located often. However when they do it can provide a high pay out amount to be included in the jackpot figure. 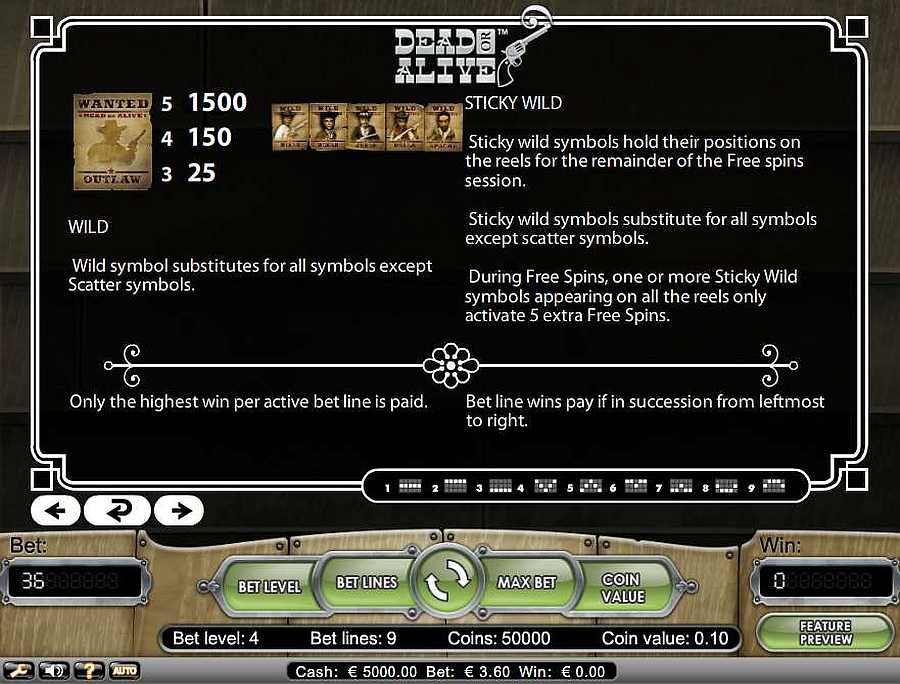 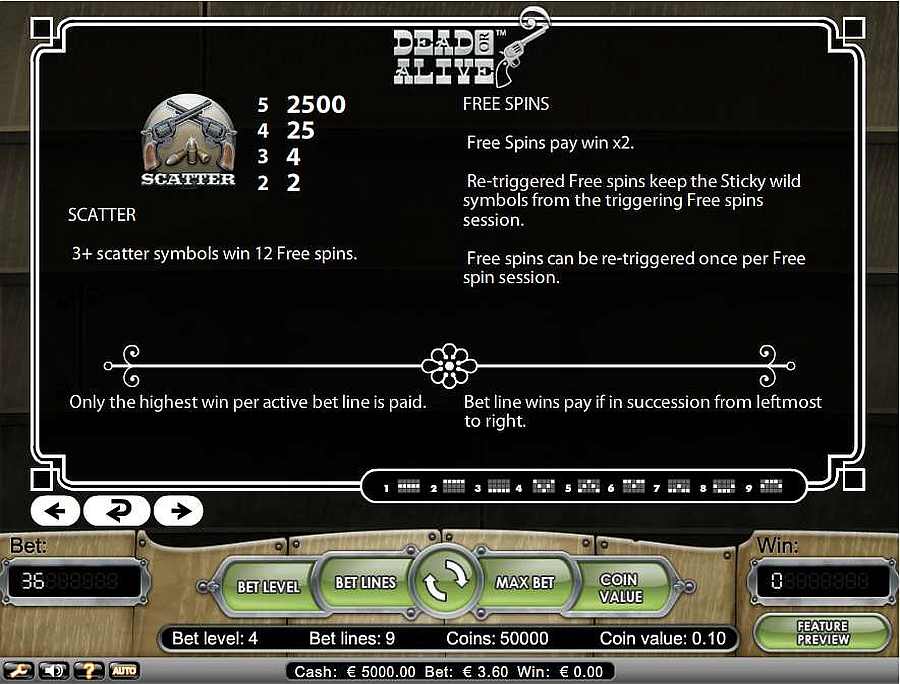 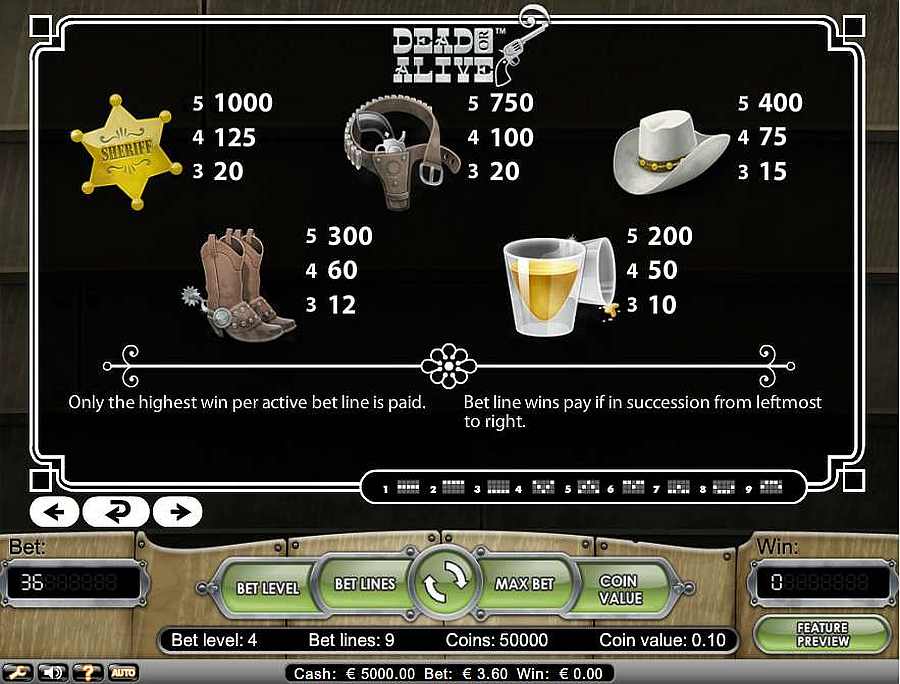 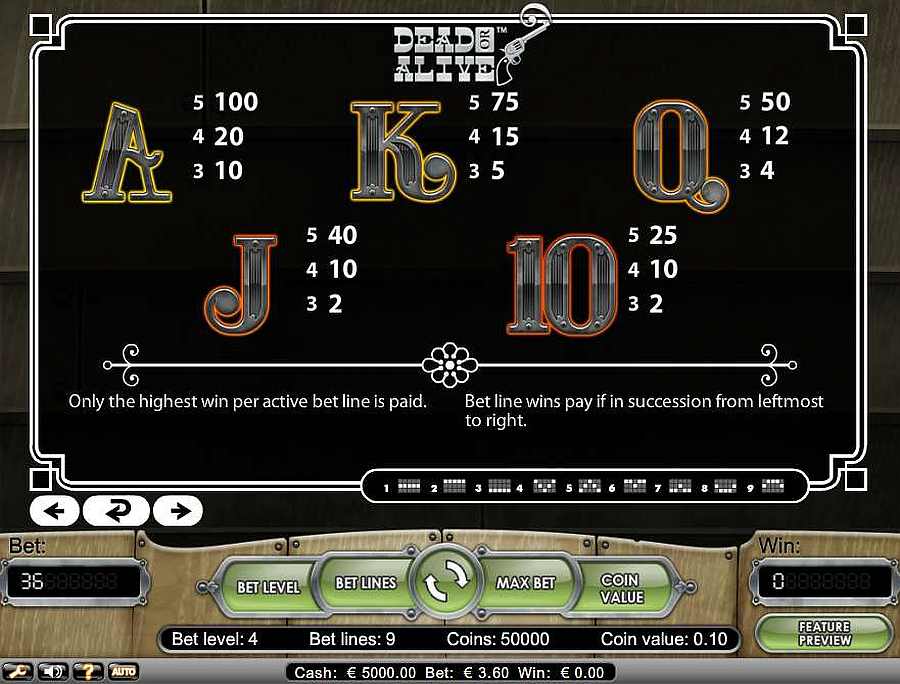 Dead or Alive is a non-progressive 5-reel, 3-row, 9-bet line multiple-coin video slot machine from net entertainment, it has a cowboy theme, and comes with a scatter symbol, wild symbol, free spins and has a maximum jackpot win of $56250