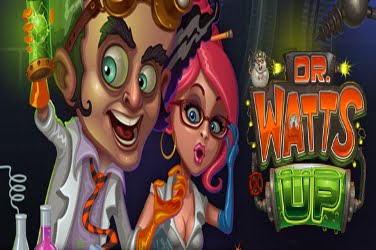 Introduced by Microgaming Giant, Dr. Watts Up Slots is an online casino play that could very well be your next favorite pass time. Whoever takes up the opportunity to play this game is said to have 243 ways of winning it! Although, it comes as no surprise, as Dr. Watts Up Slots is filled to the brim with bonuses.

Quite amusing indeed, this game is made interesting with the introduction of a wacky scientist who runs you through the different phases of the game. Once you get over the initial shock of his bizarre experimentation’s, you may find yourself falling in love with your involvement of the game. You see, the experiments are ways to ensure tens and thousands of coins for you. The scientist’s pretty-looking assistant accompanies him, as he puts his laboratory apparatus and chemicals to use.

Every individual who is looking for some fun, along with a humorous approach towards an everyday online casino play, Dr. Watts Up Slots is the right place to look into. With the countless wins and appealing graphics, this game gives you a first-hand experience of jackpot. This slot is made up of 5 reels, sporting different characters: a brain in a spaceship, the scientist himself, his assistant, a crazy-looking monkey, an orange robot, and lots more.

Dr. Watts Up Slots offer many bonuses and features, each better than the last. A few of these include:

The title logo from the game, which consists of an image of the mad scientist himself, also serves as the Wild symbol for this game. The Wild symbol in this game can be substituted for any symbol except the Scatter and Bonus symbols. Besides standing in for other symbols, scoring five of these wacky scientist symbols on the reels can win you a jackpot of 15,000 coins.

Free spins are awarded when three or more Scatters land on the reels. The number of the free spins awarded depends on the number of Scatters that you have scored, ranging between 10 and 15 free spins. During the free spins round, an entire reel turns wild for each spin increasing the opportunities to win. The free spins cannot be re triggered during this round.

Also called the Laboratory Bonus, this feature allows the player to add more cash to their existing stash. It is activated when the Bonus Scatter symbol appears simultaneously at the first, third and fifth reels. For those who are willing to give this game a trial, the Bonus Scatter symbol is depicted by a lab rat. For the Bonus Round, the gamer has to choose 2 colored test tubes, out of 12. The scientist then takes those and mixes them into his machine, giving rise to different amusing creations. Of course, these creations decide on the amount of coins you receive.

Dr. Watts Up Jackpot: Marked at 480,000 coins, this jackpot allows the chance of a larger victory for the gamer. However, the player must understand that the money conversion depends on the predetermined exchange ratio.

First and foremost, the player needs to understand that the slot has 5 reels, all consisting of several comical pictures. Like any other online slots game, Dr. Watts Up also requires to be spun to generate hundreds of coins. The reels are a delight to watch, adding to the impeccable visuals. A few of these images score higher points, like those of the scientist, his female helper, the orange robot and the monkey too. Others do not yield as many coins, such as the conical flask containing a purple chemical, the gun and the microscope.

At every spin, you must insert the minimum £0.30, collecting coins at every 3, 4 or 5 image matches. Needless to say, if 5 images match at once in a line, it harvests the highest number of coins. Naturally, 3 and 4 image matches aren’t that productive. The multiple bonuses add to the total amount of coins too. For example, if in a spin, you manage to reveal 3,4 or 5 normal or bonus Scatter symbols, you acquire the Free Spins and the Laboratory Bonus round. While the Free Spins could consist of up to 20 extra spins of the reels, the Laboratory Bonus could do well to provide you with innumerable coins, depending on your pick of the showcased chemical test tubes. On revealing 3 normal Scatter symbols, the gamer receives 3,000 coins. On exposing 4 or 5 normal Scatter symbols, the player is granted with 9,000 and 30,000 respectively.

For the coin to cash conversion rate, the player is required to decide on a coin to cash ratio beforehand. This way, there is no foul play and confusions are avoided too. As a result, the total amount of cash you win depends on your predetermined ratio. This is necessary, especially if you happen to get the chance of playing the Dr. Watts Up Jackpot. 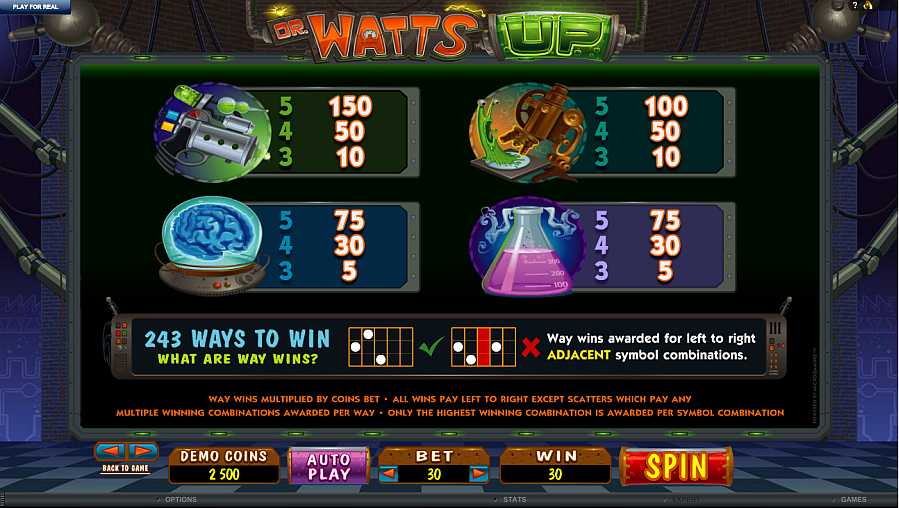 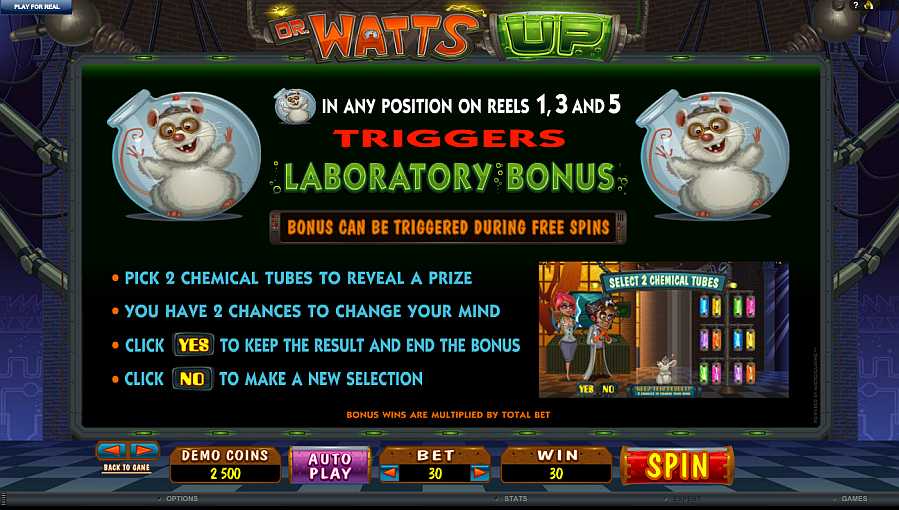 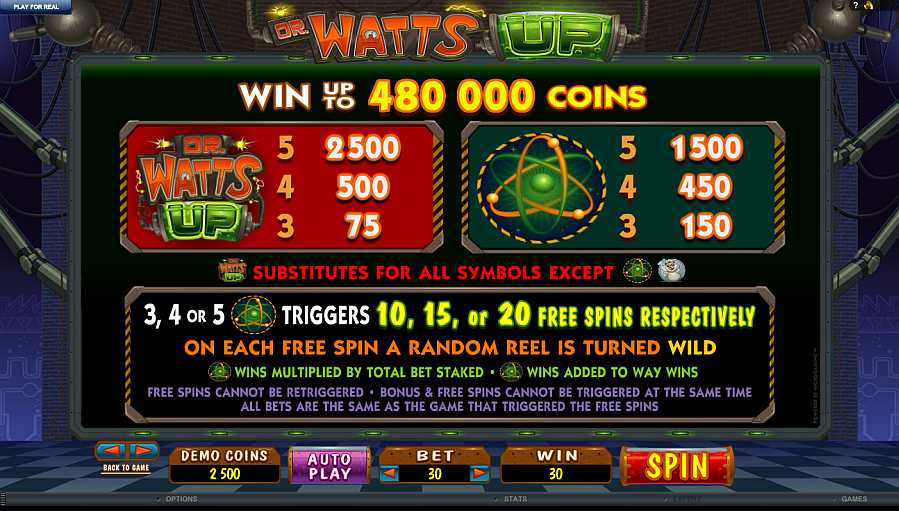 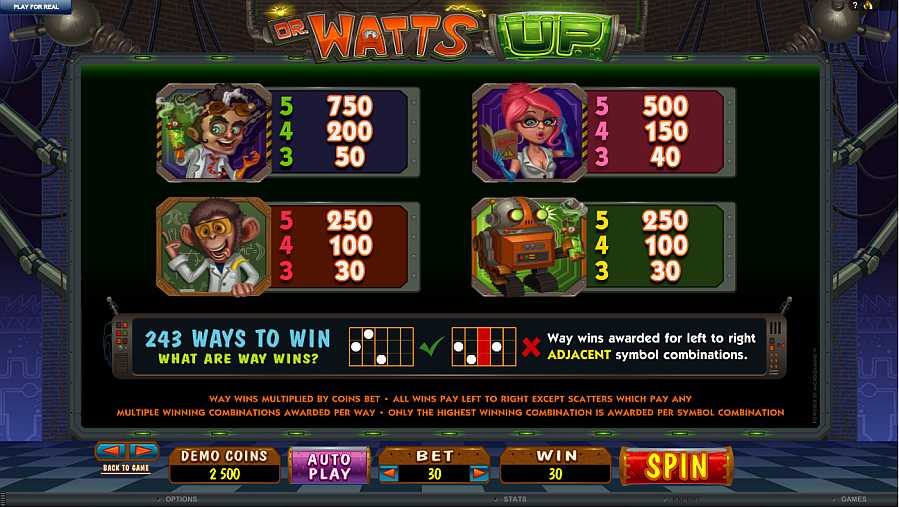 Dr Watts up is a non-progressive 5 reel 243 ways pay lines video slot game from microgaming, It has a Comical Scientist theme, and features a wild symbol, scatter symbol, multiplier, free spins and has a maximum jackpot win of $121,500