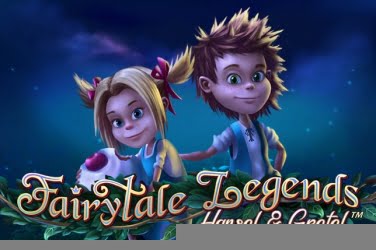 This is the second release for Net Entertainment in the Fairytale Legends series and players will not be left disappointed with this slot game. A hazy forest scene can be seen in the background of the transparent reels with a faint image of Hansel to the left with Gretel on the right. There is a bright moon at the top of the screen with the night sky lit by fireflies as players help the children find their way.

Beautiful graphics can be enjoyed whether the player is accessing this slots release via a Desktop, Tablet or Mobile device. They can find 5 reels with 10 structured pay lines but there are also 6 different Bonus Features for them to take advantage of. Meaning that the Fairytale Legends: Hansel and Gretel slots game is proving popular with numerous players from around the globe since its release in April 2017.

As the birds have eaten all the breadcrumbs Candies are used as symbols in this online casino release. Differently shaped and colored in Red, Yellow, Purple and Green they provide the lowest pay out amounts when they create a winning combination.

Both within a circular gold frame Hansel has a green background while Gretel’s is purple. These symbols have been highly detailed in their design and have a cartoony look.

Yet it is the games Logo which is the highest paying symbol and is boldly designed with ornate italics.

In an additional twist to the Fairytale Legends: Hansel and Gretel slots games format this slots provides players with 3x further Features to add to the fun. At random during the base game a cute Fairy may fly onto the screen and with her she brings more chances for players to add to their jackpot balance.

Fairy Wonder Spin Feature – here players will see from 5 up to 9 Logo symbols gather to form a cluster. They will now overlap the reels for 1x spin to generate higher pay out amounts.

Fairy Surprize Feature – following a losing spin the Fairy will wave her wand to choose a random symbol. Now starting from the lowest paying on the reels each image will morph to match this until a winning combination is created.

Fairy Wild Spin Feature – for this the Fairy will place 2x sets of stacked Wilds onto either the 1st, 2nd, 4th, or 5th reels. Then the reels will spin one more time with the additional chance of activating the Stacked Wild Re-Spin Feature.

Wild – this is an image of the Path that the children are following through the darkened forest. The symbol only appears on the 2nd and 4th reels and can change any Basic Symbol if there is the opportunity of creating a winning combination.

Stacked Wild Re-Spin Feature – should the Wild symbol land “stacked” on the reels this Feature will come into play. Now 1x “re-spin” is given to the player while more Wilds are added to the 1st and 5th reels.

Scatter – this symbol is depicted as a Treasure Chest and this needs to land on the 1st, 3rd, and 5th reels so that a Bonus Round is brought into play. First of all the player is asked to choose one of the symbols to reveal a further Feature for them to utilize to increase their winnings.

Coin Win – this simply gives players an instant cash prize which can be anything up to 15x their original stake.

Candy House – players must now choose 3x Candies to reveal a cash amount. These are either added together and an average given or a random Multiplier may be their reward.

Free Spins – now players will receive 10x Free Spins which benefit from further Features during this Bonus Round. Should 1, 2, or 3 Bonus Symbols land on the reels then an additional 2x, 4x, or 10x Free Spins are rewarded. Also the Wilds are allowed across all but the central 3rd reel to provide players with the opportunity to reach the Stacked Wilds Re-Spin Feature.

Net Entertainment have given players a wide betting range to choose from in this online slots game. Leaving them to place anything between 0.10 and 200.00 upon the 10 winning pay lines that are on offer. However this release will certainly proving appealing to high rollers as there are 6 Bonus Features to help them increase their original wagered amount.

It has a Medium variance along with a RTP of 96.71% and there is plenty to keep players entertained as they lead the children home in the Fairytale Legend: Hansel and Gretel slots game.

– Play Hansel and Gretel here with a free spin or visit NetEnt Casinos to play for real money. 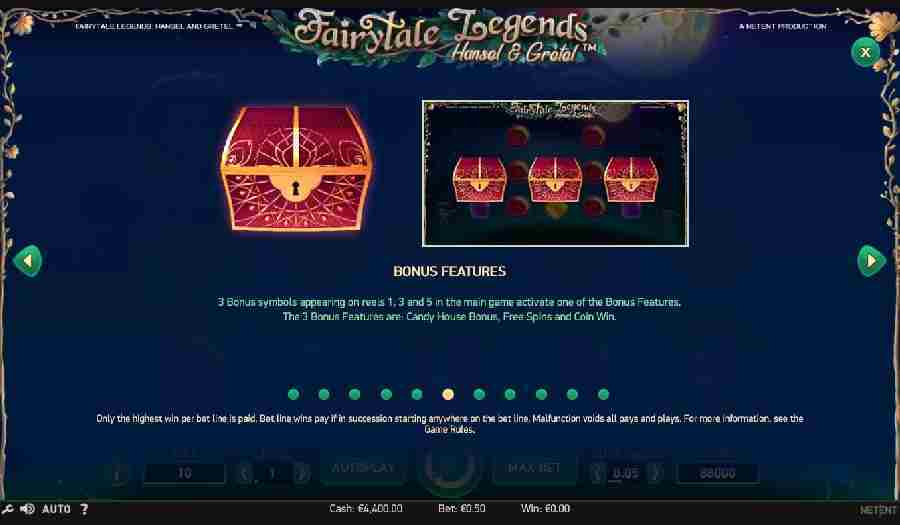 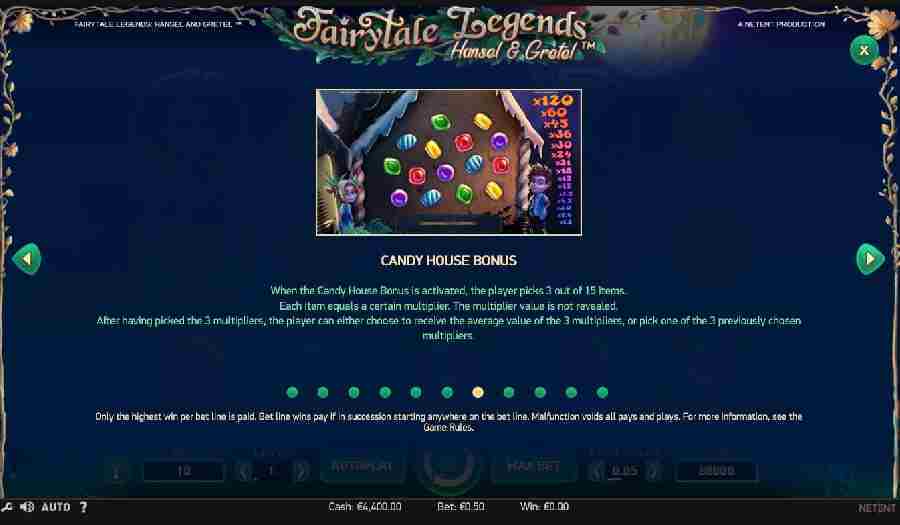 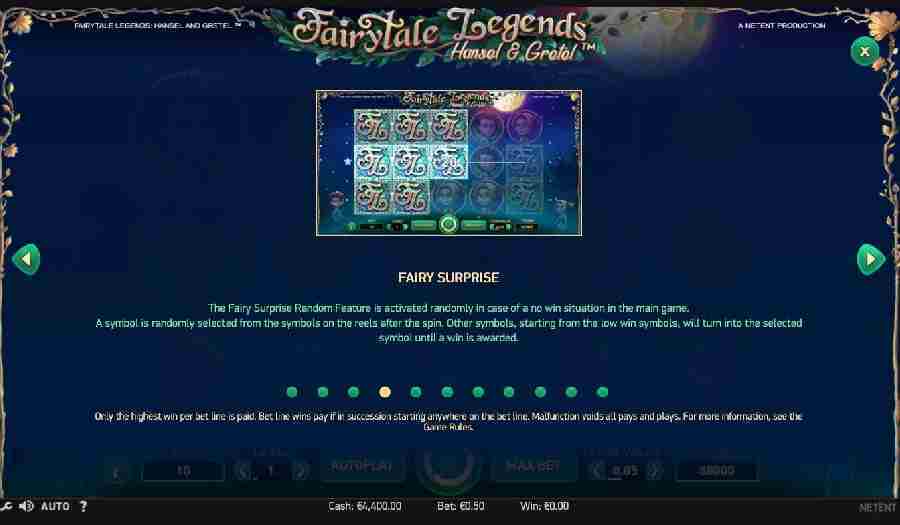 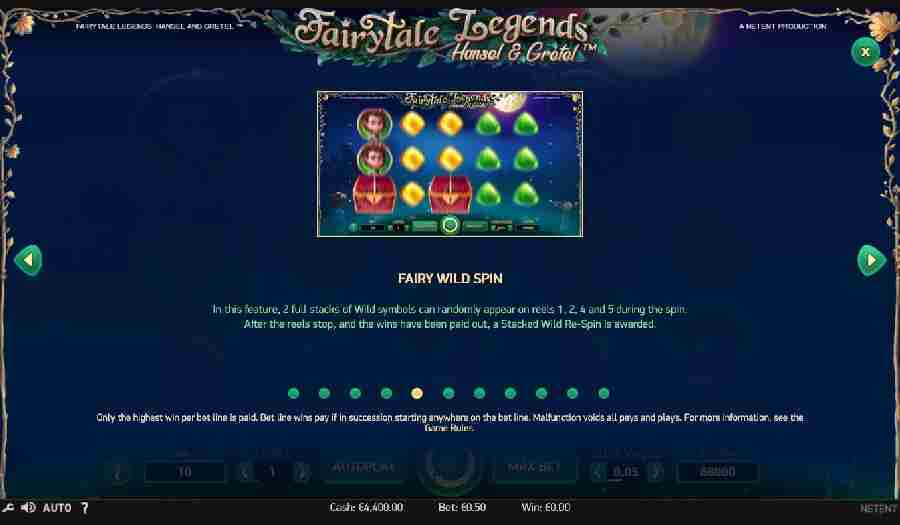 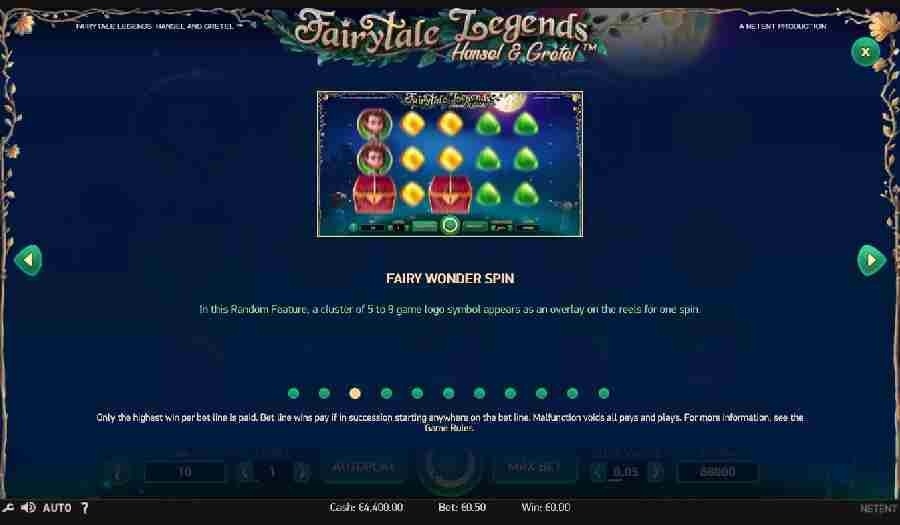 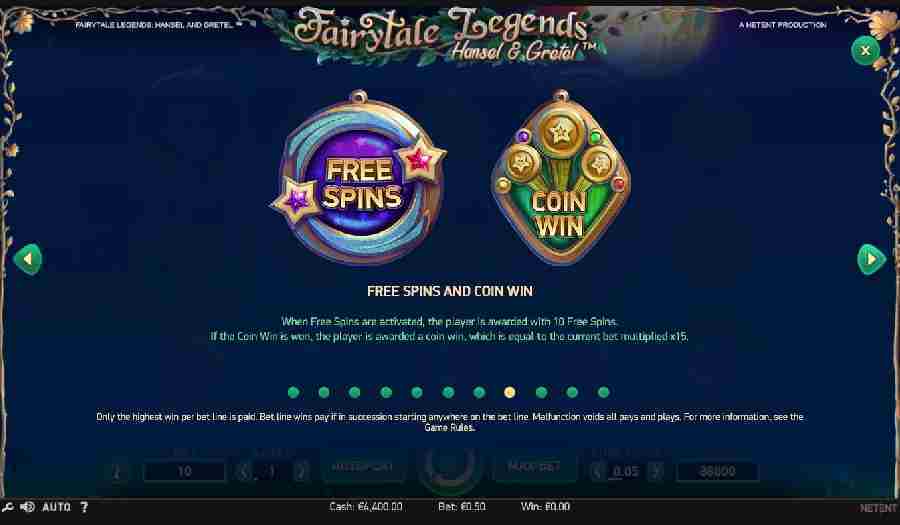 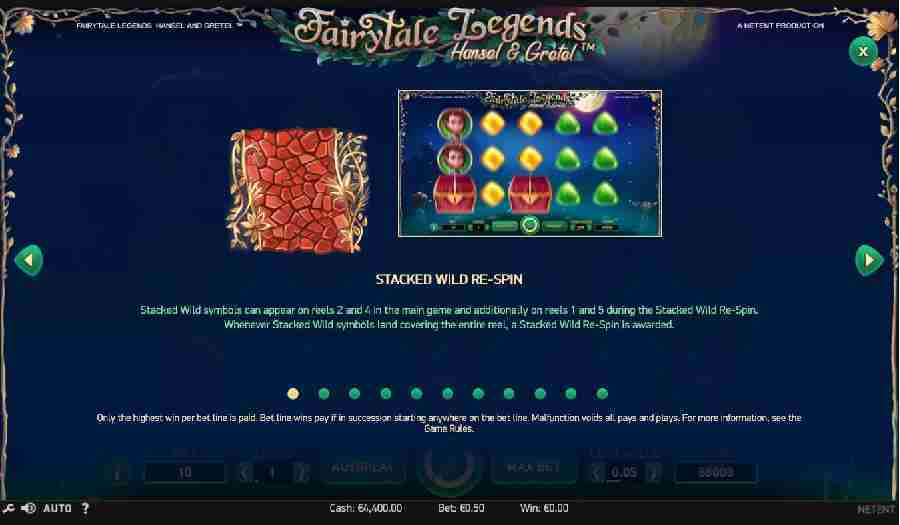 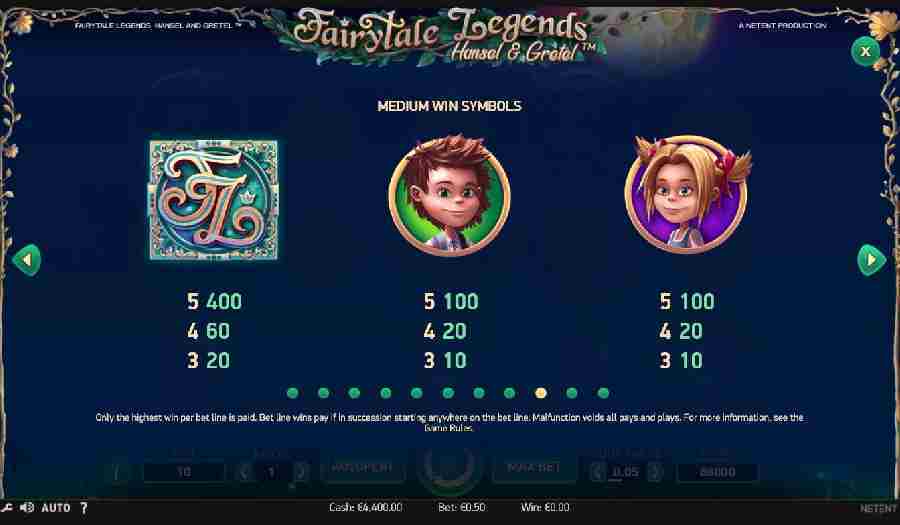