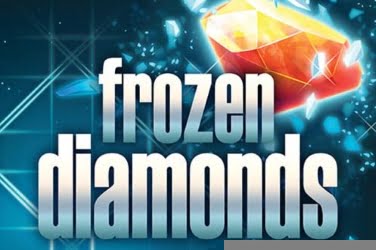 Rabcat team-up with microgaming and released this Gem themed slots game using their usual high quality graphics. Players can take a chilly trip through the Arctic, as long as they are wrapped up warm against the cold.

The 5 reels are set against an icy background, with snow-capped mountains on either side. At the top of the screen there is a star lit sky while the games Control Panel can be found at the bottom.

There is appropriate soothing music playing in the background which adds to the relaxing yet mysterious atmosphere that has been created in this online slots game. Although Rabcat have included alternative features compared to other casino offerings, there is still plenty to keep players entertained during the game.

Each symbol is shown encased within a block of ice which explodes when a winning pay-line is created. It is an animation which add to the fun element of the Frozen Diamonds slots game. With 20 fixed winning pay lines and Tumbling Reels players of any level can add to their initial wager.

Lower paying symbols used in the game are the usual 10 through to Ace icons which are found in many online casinos. However they have been designed using an ornate silver shade of color to remain in keeping with the chilly feel of the game.

Higher pay out amounts can be awarded should the player create a winning combination using the Gem symbols. There is a Green Emerald, a Red Ruby, a Purple Amethyst, and an Amber Diamond.

A multi-colored layered Star is the Wild symbol and if it appears on the games 5 reels it can change any other to create a winning payline.

The main Bonus Feature that is included in this online slots game is the Tumbling Reels. This means that any symbols that make a payline will melt away from their position to allow other to replace them. It is something that can help to increase the player’s final jackpot balance considerably.

If the player wins 3x in a row then the Free Spins Bonus Round will be activated. Here players will be awarded with either 5x or 10x Free Spins that is selected randomly. During this round on each spin 2 or 3 Wilds are shown on the 3rd reel which gives players further chances to add to their winnings.

There is the opportunity to reactivate a 2nd Tumbling Reel combination when in the Free Spins Bonus Round. At this point a further Free Spin will be added to be played at the end of the round. This spin will show the Wilds Stacked upon the 3rd reel and if a win is achieved it will benefit from a 2x Multiplier.

After each win the player also has the opportunity to double their pay out amount. The screen will show 2x highlighted cubes and the player is asked to choose which one the Diamond symbol is hidden behind. Players are able to take advantage of this feature up to 5x, however if they guess incorrectly they will lose their current balance and be returned to the base game.

This particular online slots game is proving popular with both low and high rollers who enjoy its Arctic Gem theme. It is due to the fact that players can wager from 0.20 to 40.00 on each spin and there is an impressive 96.47% RTP.

Providing players with Wilds, Free Spins, a Multiplier and a Gamble Feature. So the fact that there is no Progressive Jackpot, Scatter or Mini-Game takes nothing from the enjoyment of the game.

Although it may be hard to activate, the Free Spins Bonus Round provides players with numerous opportunities to increase their jackpot balance. This along with the Tumbling Reels Feature which it boasts enticing players who prefer its slower pace. Both elements of the game that is appealing to players of all levels.

Rabcat have also included an Auto Play Feature in this chilly release which allows players to set the reels to spin automatically. This can be for a certain amount of times or until the maximum wager placed has been reached. Something that is of benefit to those who wish to be less interactive with the software.

With its Gem theme and calming atmosphere this slots game is being enjoyed by players in various Rabcat online casinos around the globe. Including 20 winning paylines there are plenty of chances for the final jackpot amount to be increased.

Frozen Diamonds is a non-progressive 5 reel 20 fixed pay lines video slot game from microgaming, it has a frozen gems theme, and features a wild symbol, Multiplier, free spins and has a maximum jackpot win of $2,000