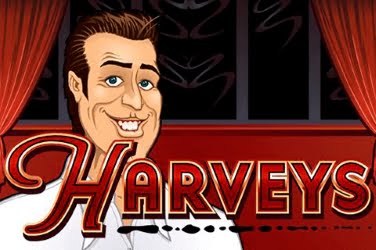 Created by Microgaming in 2006, the Harvey’s slots game has a Restaurant theme. With this in mind the designers have depicted a restaurant background, with appropriate soothing tunes. As with many online casino games, it has 5 reels and 25 winning pay-lines.

The symbols used in the Harvey’s slots game include a handsome Waiter, a Bowl of Soup, Les Escargot, some Crayfish, and a tasty Dessert. Players can also find the usual 9 to Ace card symbols upon the reels of this Microgaming online casino game.

The Harvey’s slots game has coin sizes ranging from $0.01 to $0.20. However the maximum bet amount is set quite high at $500. This makes this online casino game popular with both high and low rollers.

The Waiter also acts as the games Wild symbol. It is able to alter other symbols across the 5 reel of the Harvey’s slots game to generate more winning paylines for the player.

Unusually there are two Scatters found upon the reels of the Harvey’s slots game. One is shown by the Harvey’s Dinner Mints which are scattered across all 5 reel of this online casino game. The other is a Champagne Bottle which can only be found on the 2nd and 4th reels. Both provide options for the player to add to their final winnings.

Used as the games Wild is the Harvey’s Waiter. It can alter any symbol upon the 5 reels of this Microgaming online casino game. When this occurs more winning paylines can be generate to increase the players final pay-out amount. The Wild symbol is also animated. When it is part of a winning line the player can see the Waiter chopping ingredients to create a sumptuous meal.

The Harvey’s Dinner Mints Scatter symbol offers players the chance of earning a Multiplier when they are spun across the reels of the Harvey’s slots game. The Multiplier is determined dependent on how much the player wagered on that particular spin.

The second Scatter symbol is shown as a Champagne Bottle. These can only be found upon the 2nd and 4th reels of the Harvey’s slots game. When they both appear however a Free Spins Bonus Round is activated. The spins awarded is random and can add up to a maximum of 30. There is also a random Multiplier available at this point which can be anything up to 25x the original amount wagered.

There is also a Gamble Bonus Round in the Harvey’s slots game. Here players can either double or quadruple their final winnings if they can case the color and suit of a down-faced card correctly.

( Now available on mobile version ) The first step to be taken when playing the Harvey’s slots game is to decide upon how much to wager. A bet from $0.01 to $0.20 can be placed upon any of the games 25 winning paylines. The reels are then spun in the hope of creating as many winning combinations as possible. This amount is then added to the final pay-out that will be awarded.

Bonus Features can be found in the Harvey’s slots game. The first is depicted as the Wild Waiter which can create more winning pay-lines. There are then two Scatter symbols. One shows an image of the Harvey’s Dinner Mints, while the other is a Champagne Bottle.

It is possible to play the Harvey’s slots game in Expert Mode. Within this Mode there is an Auto-Play feature which players can utilize. This is useful if they which to experience a less hands-on form of game play. In Auto-Play the gamer can set the reels to spin automatically. Either with an amount of spins set, or the game will end when the wagered figure is reached.

Although this online casino game by Microgaming doesn’t have a progressive jackpot, there are plenty of opportunities to add to the winnings. Not only be spinning Wilds and Scatters and the Multipliers that the Harvey’s slots game has to offer. But also with the Gamble Bonus Round on offer at the end of the base game.

With detailed graphics and mouth-watering foods the Harvey’s slots game has a restaurant theme which appeals to many players from across the globe. 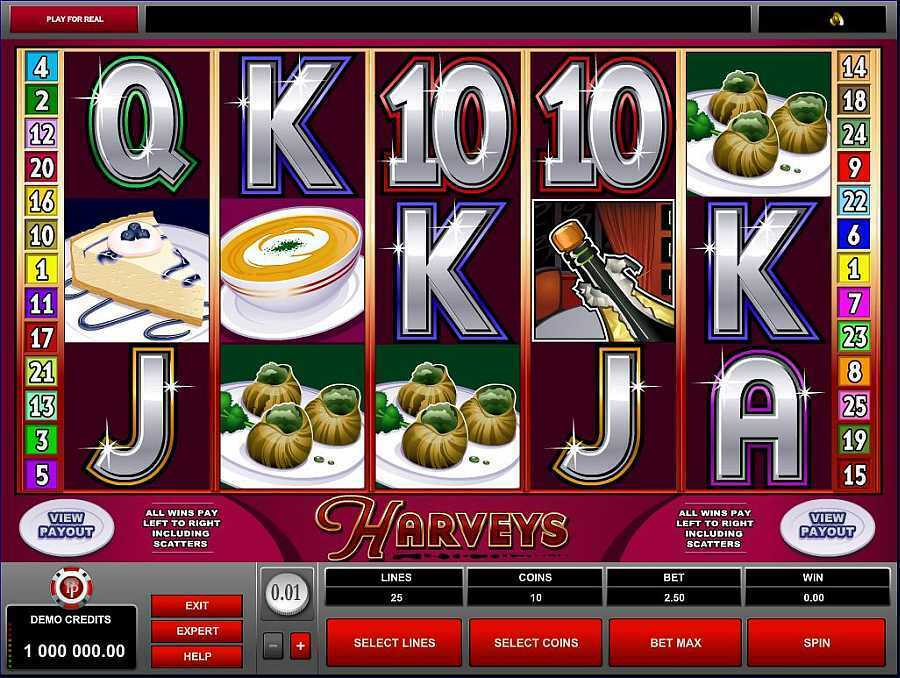 Harvey’s is a non-progressive 5 reel 25 pay-line video slot machine game from microgaming, it has a restaurant theme, and comes with a wild symbol, scatter symbol, multiplier, free spins and has a maximum jackpot win of $10 000