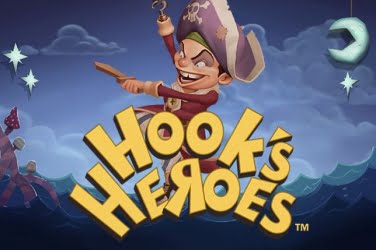 Captain Hook is the main character in this Pirate themed slots game from Net Entertainment. Inspired by the book Peter Pan the graphics, have a cartoony feel with a stage scene showing in the background.

The 5 reels of the Hook’s Heroes slots game are set within a frame in the center of the screen. Players can enjoy the moving waves of the ocean with a pirate ship on the right, sailing toward the island on the left. With a smiling sun in the top right of the screen and the clouds hung from ropes and chains the stage is set for this Pirate’s journey.

To add to the atmosphere of the Hook’s Heroes slots game there is Caribbean music playing throughout. This creates an enjoyable feel to this fun release from Net Entertainment which is found in their numerous online casinos.

It is possible to play the Hook’s Heroes slots game on a mobile version, meaning that players can join the fun wherever they may be. As the designers have used the typical 5 reel design along with 20 winning paylines there are plenty of opportunities for players to add to their cash out amount.

Lower paying symbols in the Hook’s Heroes slots game are the usual 10 through to Ace icons which are found in many online casinos. Then players can find 5 different Pirate characters which also offer pay out amounts if they create a winning combination.

Captain Hook himself is used as the Wild symbol in the Hook’s Heroes slots game. When he appears on the reels he can change other icons to provide players with more chances of winning.

The main feature which has been incorporated into the Hook’s Heroes slots game is with the Free Spins. There is a young character dressed in a Crocodile Costume who acts as the Scatter symbol and can offer players with a variety of ways to benefit from this addition to the games design.

A Feature Spins Bonus Round can be activated when 2 Scatter symbols are revealed upon the reels of the Hook’s Heroes slots game. At this point players will be awarded with 1x Free Spin and an additional bonus feature which is chosen at random.

However when 3 or more Scatter symbols appear then the player has the chance of activating 3 different options. The 1st of these is the Fairy Feature which will award players with 7x Free Spins and from 2 to 5 random Wilds placed upon the reels.

There is also a Mermaid Feature which allows players 10x Free Spins with the addition of a 2x Multiplier on each winning combination which is created. A further benefit to this option is if a Caption Hook Wild symbol helps to create a winning payline. Should this occur then players will see their pay out amount receive a 4x Multiplier.

If players opt to activate the Pirate Feature during the Hook’s Heroes slots game then they are able to enjoy 15 Free Spins. During this time all the symbols upon the reels will act as a Scatter to enable the player with more chances to create a winning combination.

Hook’s Heroes slots offer players with numerous betting amounts to take advantage of. Wagers can vary from $0.20 to $200 on each spin depending on how many paylines are put into play and the coins which are placed.

This factor does makes this offering from Net Entertainment appealing to gamers of any level. Both high and low rollers can benefit from the various offerings that the Hook’s Heroes slots game provides.

It is the Scatter symbol which provides the most Features in the Hook’s Heroes slots game. Not only can players enjoy a Feature Spins Bonus Round, but also 3 other different options which include various Multipliers along with Free Spins.

Although the Hook’s Heroes slots game doesn’t boast a Progressive Jackpot, Gamble Feature or any additional Multi Games there are still plenty of chances for players to increase their winnings.

Players can use the Captain Hook Wild to create more of the 20 winning combinations, and the Crocodile Scatter to be awarded with Free Spins and Multipliers. All of which makes the Hook’s Heroes slots game appealing to players of all levels.

The comical element which is included in the design of this Net Entertainment release provides some fun while exploring the sea’s on this Pirate journey. 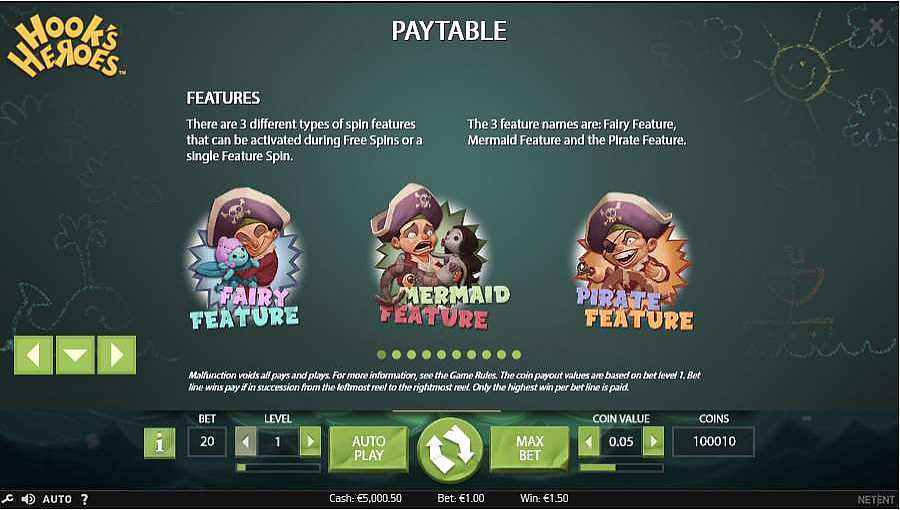 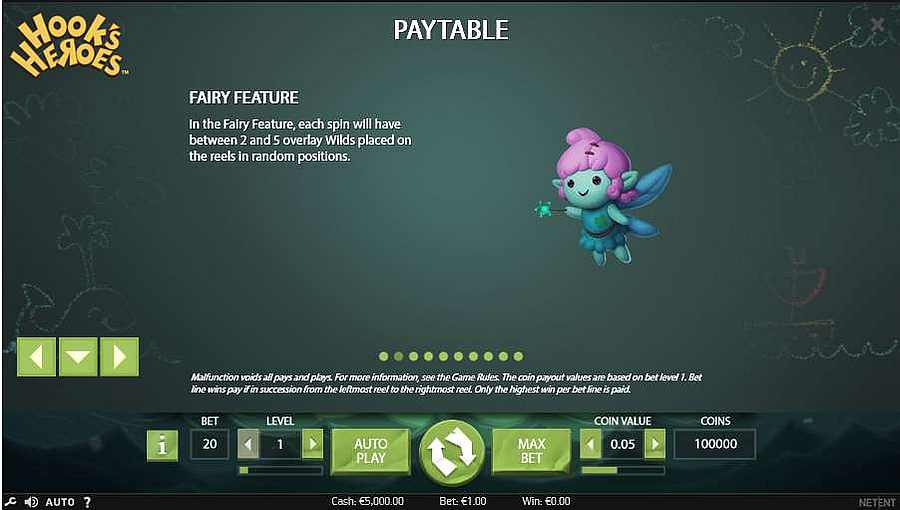 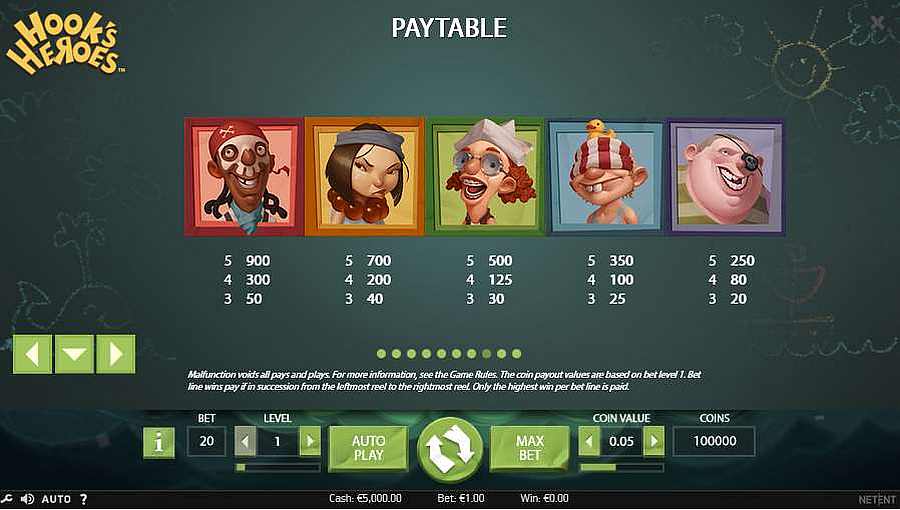 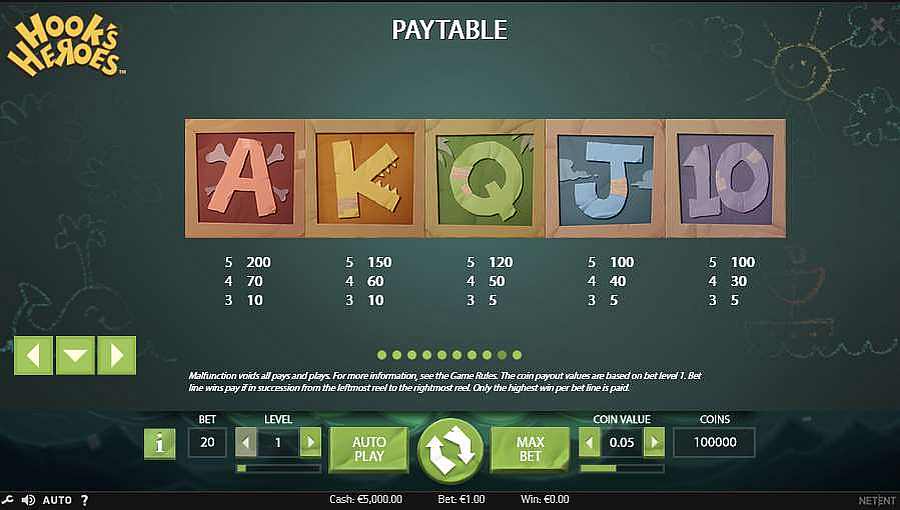 Hooks Heroes is a non-progressive 5 reel 20 paylines video slot machine game from net entertainment, it has a pirate theme, and comes with a Scatter, wild symbol, Multiplier, free spins and has a maximum jackpot win of $9000