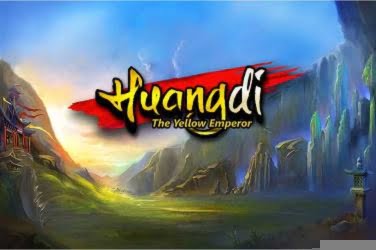 Microgaming have created this online slots game based upon the Chinese myth of this legendary Emperor who was said to have reigned 5000 years ago. It is thought that the man initiated the Chinese civilization and invented many things which are still used in numerous cultures to this day.

Players will find the games 5 reels set upon a hazy mountainous backdrop with a Chinese temple to the right. The ornate frame hangs beneath a clear blue sky and all the graphics that have been used are intricately designed.

This slots release from Microgaming can be found in their numerous online casinos and is proving popular with players of all levels. It is available on either a Desktop, a Tablet, or any Mobile devices so it is easily accessed no matter where the player may be. And nothing is taking from the smooth running of the Huangdi – The Yellow Emperor slots game even when being enjoyed via a smaller screen.

Written in a flowing Chinese calligraphy style font players will find the 10 through to Ace symbols. They have been delicately designed using gentle shades of color which enhance the exotic feel of the game.

Huangdi himself also becomes a symbol within the game along with his Sword, Treasure Chest and a Musical Instrument. All of these provide players with higher pay out amounts should they be used in a winning combination across the reels.

Wild – the Huangdi – The Yellow Emperor slots games Logo acts as the Wild symbol and besides the Scatter it can change any other on the reels if there is the chance to make a winning payline.

Scatter – a Golden Dragon is the Scatter symbol in this online slots game. No matter where this symbol lands it can add 100x the player’s initial wager to their jackpot balance. However 3 or more of these images need to appear on the reels so that the Bonus Feature can be activated.

Free Spins – when this Round is brought into play 15x Free Spins are rewarded and the 1st reel will be stacked with Wilds throughout. In addition to this the Expanding Symbols feature is made available to players to take advantage of. And as this Bonus Round can be retriggered at any point there are even more chances for players to add to their winnings.

Expanding Symbols – if any 3 of the higher paying symbols become stacked upon the 1st reel then they will expand to a random adjacent position. Any other matching symbols that are shown on the screen can also be seen to expand meaning that some large wins can be had if the player is lucky enough.

There are 25 structured paylines in this 5 reel slots game from Microgaming. It is a game that has proven appealing to both high and low rollers due to the range of wagers that can be placed. These can from as little as 0.25 but rise to 125.00 with each spin that the player chooses to make.

The designers of the game have been very creative in its format, providing players with various entertaining Bonus Features for them to enjoy. Players can find a Logo Wild and a Golden Dragon Scatter symbol upon the games reels. Not only do these help to generate more wins there is also a Free Spins Bonus Round and an Expanding Symbols Feature to take advantage of.

For those players who need to be less interactive with the games software there is the opportunity to utilize the Auto-Play Feature that the designers have included. This means that the reels can be set to spin automatically, either for a certain amount of times or until the maximum wager is reached. This with the chance to alter the speed of the reels and the volume of the soundtrack enables players to set the game to their own personal preferences.

With a beautiful design and a smooth game play this is a Medium various slots offering which is enticing players with its RTP of 95.48%. Players are transported back to Ancient Eastern times and with this legendary Emperor found among the games symbols there is plenty for players to enjoy in Huangdi – The Yellow Emperor slots.

Huangdi – The Yellow Emperor is a 5 reel, 3 row, 25 bet line video slot game from microgaming. It has a Chinese warrior theme, the game features Scatter symbol, Wild symbol, and free Spins. and has a maximum jackpot win of $6,250