Jack and the Beanstalk Slots Review 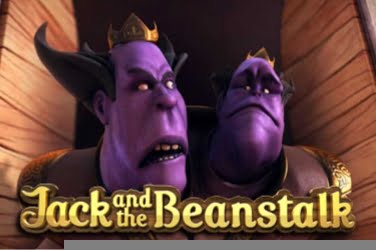 This is a 5 reel 20 pay line online casino game which was released in 2011 by Net Entertainment. Jack and the Beanstalk slots are now available in mobile versions which have increased its already dedicated following.

As expected from the title, the game is based on the Fairy Tale of the same name. Telling the tale of young Jack when he is sent to market to sell a cow, only to return with some magic beans. His mother throws them out of the window but by morning a huge Beanstalk as grown.

After climbing to the top Jack decides to steal treasures from the Giant and his wife who live there. He is then pursued, and only able to kill the Giant by chopping down the Beanstalk.

Players can find the 5 reels encased in a simple frame with the typical scene shown in the background. Jack’s family home is shown at the left, with the infamous Beanstalk on the right.

Quality 3D graphics have been used, with a cartoony feel to the symbols design which provides additional appeal. The appropriate music and sound effects only enhancing gameplay further.

Jack and the Beanstalk Slot Features

Symbols showing 10 through Ace are shown as twisting vines and branches. These are the lowest paying symbols in this online casino game. Higher paying symbols are all in keeping with the Fairy Tale theme and include a Watering Can, an Axe, a Cow, the Giant, and his Wife, and Jack himself.

The designers use its games Logo as the Wild symbol. And it provides a certain twist to this particular online casino game. The Logo Wild can appear at any time during the game and will provide a Walking Wild Feature.

At this point in the game, the player will be awarded a single Free Spin, which will then move the Wild symbol one place to the left. However, it will remain on the screen until reaching the final of the 5 reels. This enables the player with numerous chances of completing any of the 20 winning paylines which are available.

For every win that is created, players are awarded an additional Free Spin, and all payouts benefit from a 3x Multiplier. Which is a Feature that any regular gamer will appreciate when enjoying the fun of play?

There is a Treasure Chest used as the Scatter symbol in this 5 reel game. When 3 or more of these appear across the 5 reels of the game then players will be awarded 10x Free Spins.

Should this Bonus Round be re-triggered during this point in the game than an additional 5 Free Spins will be given to the player.

During the Free Spins, Bonus Round players may witness a Key symbol appear on any of the 5 reels. These can be collected and will award players with higher payouts.

3x Key symbols will change the next Wild into 2x Stacked Money Bags. 6x awards the 3x Golden Hens payout amount when a Wild is next revealed. Yet should a player manage to collect 9x Key symbols then they can take advantage of the next Wild Expanding across the reels to allow the Golden Harp payout. All of these additional features add to the player’s enjoyment of the Jack in the Beanstalk slots game.

Jack and the Beanstalk Game Play

The Jack in the Beanstalk slots game can appeal to players of all levels who enjoy the Fantasy theme. Players can place a wager as low as $0.20 on each spin should they choose. However when betting the maximum balance allowed this can raise up to $100.00 which proves popular with high rollers.

Players can take advantage of the Fairy Tale atmosphere as they hunt for the 20 winning paylines which can be found across the 5 reels of this slots game. Using the Wild and Scatter Bonus symbols to benefit from the higher payouts that they provide.

AutoPlay is also an additional feature which players can utilize. This provides various options to set the game to play in the individual’s preferred mode. Whether simply adjusting sounds and speed settings, to allow the reels to spin automatically.

Jack and the Beanstalk slots is a Medium Variance game which can provide players with numerous winning opportunities. With 20 winning play lines and additional Bonus Features, there is much to enjoy from this Net Entertainment online casino release. 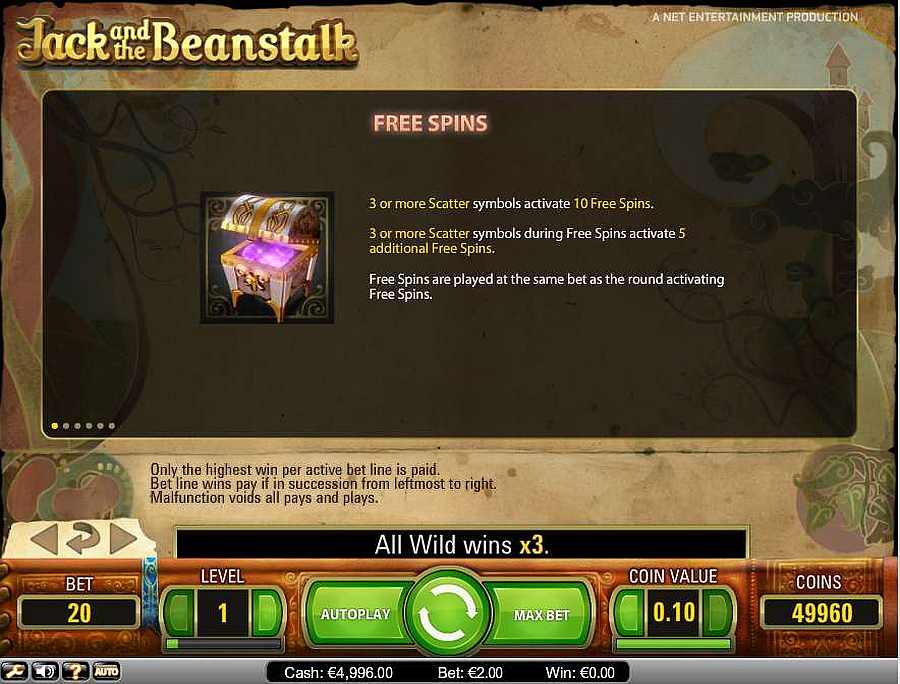 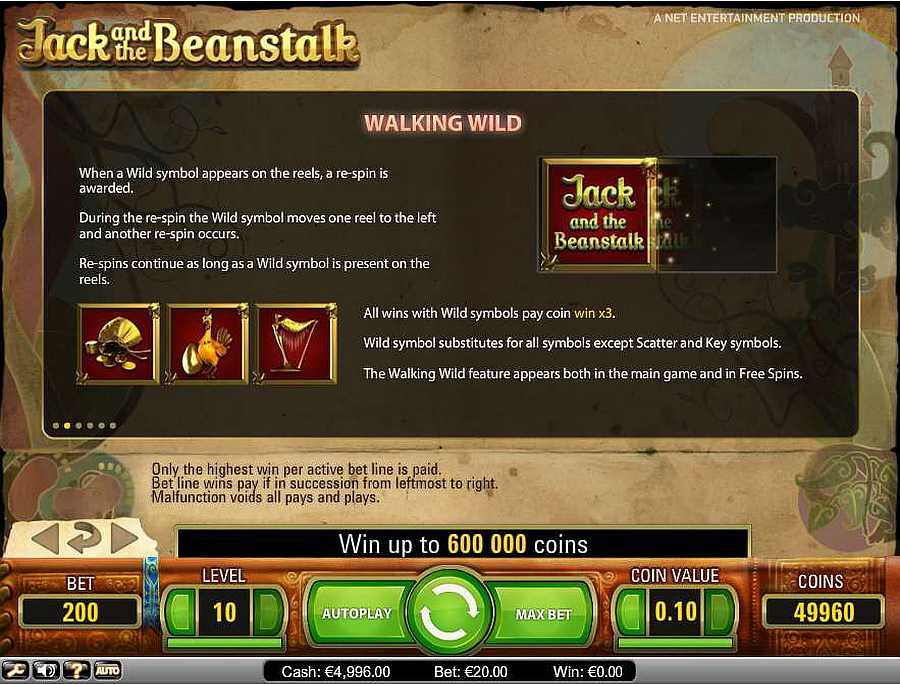 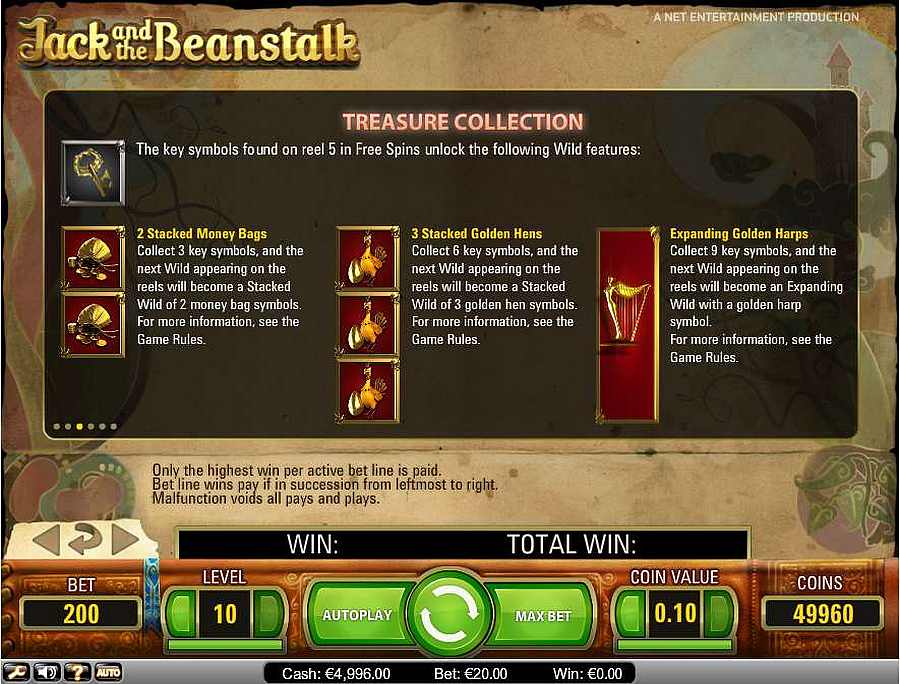 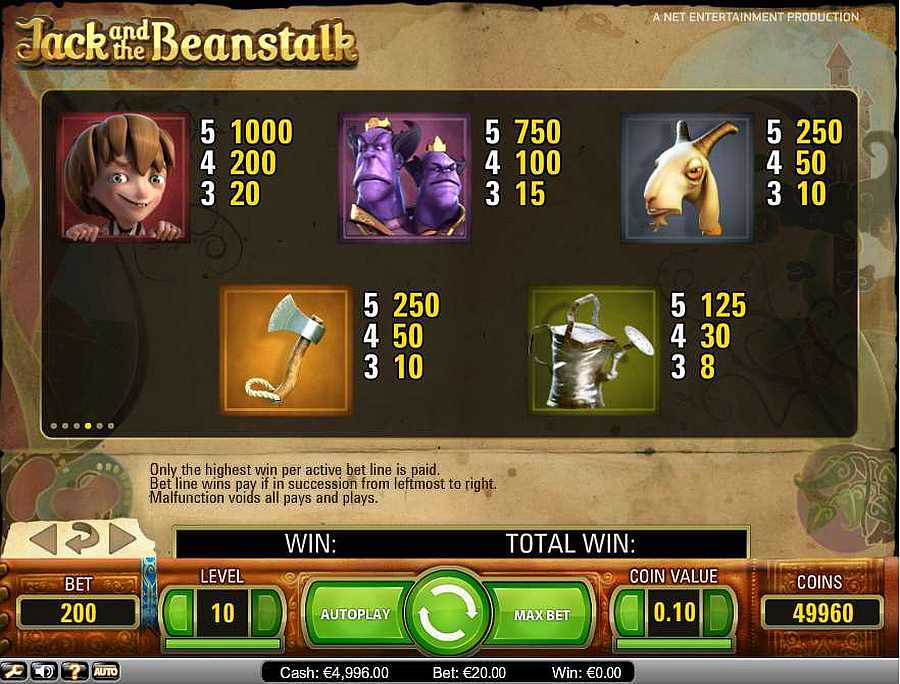 Jack and the Beanstalk Casinos & Bonuses

Review Breakdown Jack and the Beanstalk

Jack and the Beanstalk is a non-progressive 5 reel 20 paylines video slot machine game from net entertainment, it has a Fairy Tale theme, and comes with a multiplier, scatter symbol, wild symbol, free spins and has a maximum jackpot win of 30000 coins.