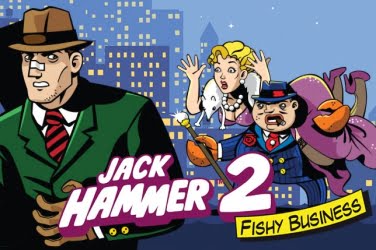 Following the success of their first release, Net Entertainment have taken the same Comic Book theme to create this latest addition to their online casinos. Players can re-join the Hero Jack Hammer as he tries to save the damsel in distress Pearl. She has been kidnapped by Don Crabby and his Goons, and now Jack has to hunt them down at the city’s dockside.

The 5 reels are set as if upon a Comic Book page within a striking white frame. In the background is the city skyline lit at night, with a bridge to the right. Players can enjoy a short introduction sequence before the Jack Hammer 2 slots game begins.

All the music and graphics are of the highest quality and help to add to the adventure of this online slots game. The colors used are bright and vibrant, creating an old-style look that can transport players back to their childhood.

This Crime Fighting offering from Net Entertainment can be enjoyed on any mobile device. Due to the software used in its design players will not be left disappointed even if they are using a smaller screen.

Even though these are lower paying symbols, they are all in keeping with the theme of this slots game. Players can find a Microphone, a Gun case, Barrels of Fish, a Speedboat, and the Dock itself.

Higher paying symbols include Jack Hammer himself, Don Crabby, his Goons, and of course Pearl.

The Net Entertainment creators have used a classic bold 3D design for all the symbols found on the reels of the game, adding to the Comic Book theme.

There is a “Wild” sprayed with bullet holes that can be found upon the 5 reels. When this symbol appears it will change random other symbols, apart from the Scatter. This can help to create more winning combinations for the player to take advantage of.

An Electric Eel is the Scatter symbol but it takes 5 of these to be found before the Free Spin Bonus Round is activated. The amount of spins given depends on the amount of Electric Eel Scatters that were revealed.

For 5 Scatters players are given 10x Free Spins, this increases to 13x for 6 symbols. This figure increases again should 7 Scatter symbols be found when 16x spins are awarded. And the maximum of 20x Free Spins will be allowed if 8 Electric Eels are spun.

During the Free Spin Bonus Round players will also find that all winnings during this stage of the game receive a 2x Multiplier. Another chance to increase the final jackpot amount for the player to collect.

Yet it is the Sticky Wins Bonus Feature which provides the most opportunity to create 1 of the 99 winning combinations. After each winning spin all the symbols which created it will freeze in place for a 1x Free Spin. Should the player land a symbol which can be included in the win then that will also freeze and a further 1x Free Spin is given. This particular Bonus Feature will continue until no more symbols can be added and the player is returned to the base game.

As there are a possible 99 winning combinations included in the Jack Hammer 2 slots game Net Entertainment have kept the coin denomination low. They range from 0.01 to just 0.50, a fact which makes the game appealing to beginners and those who prefer not to make a large wager. However even though the minimum bet is just $0.50, this does rise to a substantial figure of $250. This is why this online slots game is also proving popular with high rollers.

Although the Electric Eel Scatter is on each of the 5 reels it is rare for players to have the chance to activate the Free Spins Bonus. However, if they should, they are sure to get a decent return on their initial wager.

This is something which some players may find disappointing, but the Wild symbol and Sticky Wins Bonus Feature more than compensates for this. With these players are provided with various opportunities to increase their winnings and can receive a high pay out figure once the game is over.

Not only available to play on any Mobile platform, this online slots game also has an Auto Play Feature. This allows players to be less interactive with the Net Entertainment software should they be busy with other things.

The Jack Hammer 2 (Fishy Business) slots game is highly entertaining for all. And any player can enjoy the Comic Book Crime Fighting theme as they watch their jackpot balance mount. 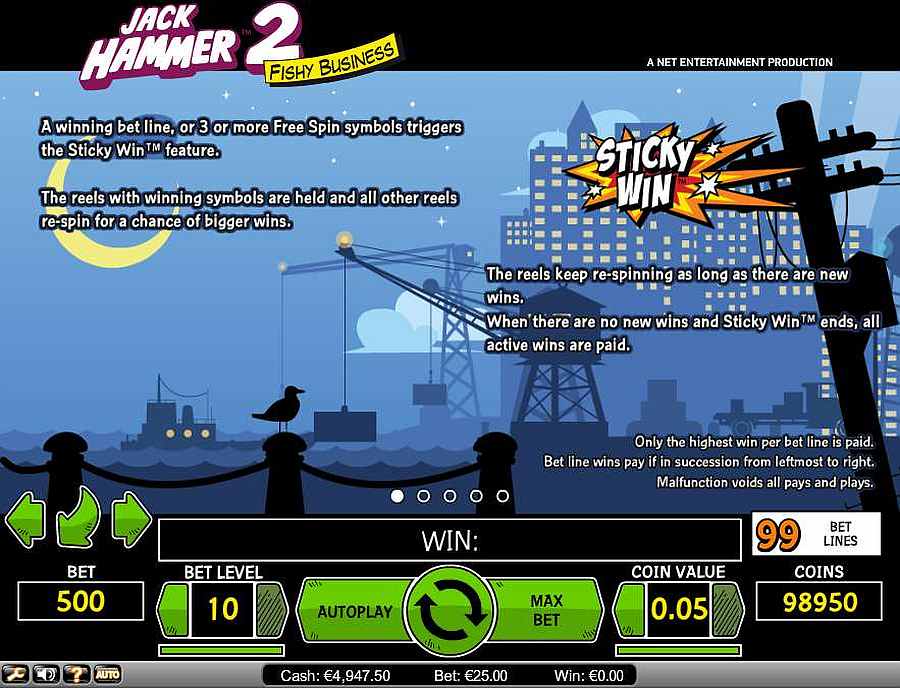 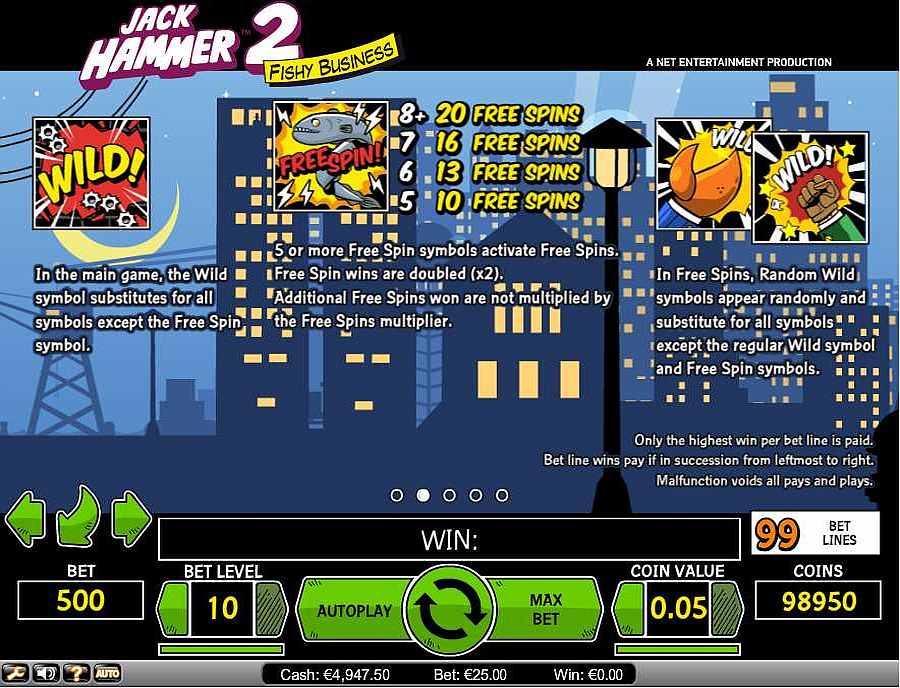 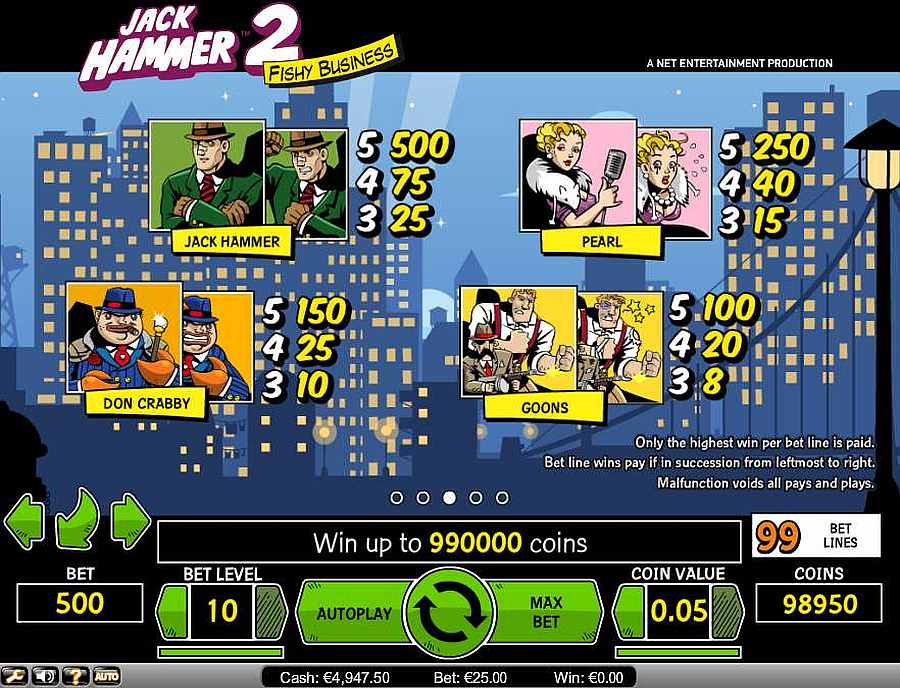 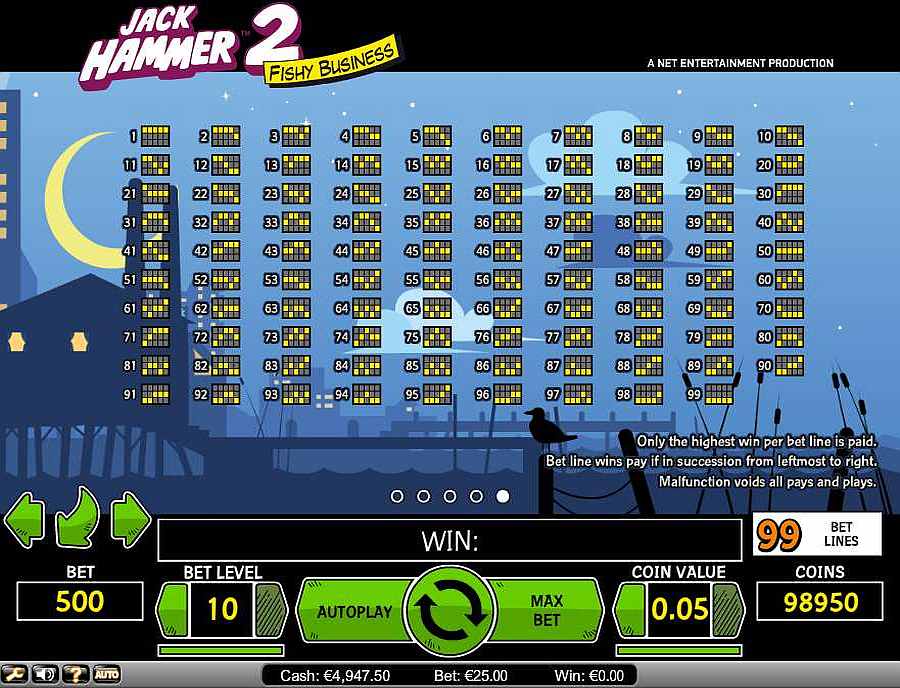 Jack Hammer 2 (Fishy Business) is a non-progressive 5 reel 99 paylines video slot machine game from Net entertainment, it has a Crime Fighting theme, and comes with a wild symbol, multiplayer, Scatter symbol and free spins and has a max jackpot win of $2,500