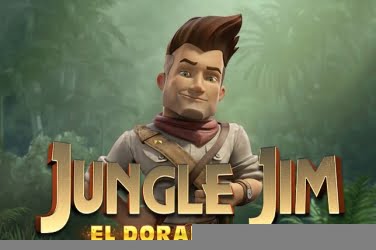 There are numerous slot games that have taken this Treasure Hunt theme as their inspiration and this microgaming release has that same format. Players can join Jim on his quest through the jungles of South America in search of his fortune. They will find the 5 transparent reels set as if upon a broken stone wall with leafy trees to the side. Jim stands to the left of the screen and his character is animated so players will see him either leaning upon his spade or taking a refreshing drink after digging.

As to be expected from this games designer’s high quality detailed graphics have been used throughout its format. So players are able to travel across the reels in crisp clear colors whether they are using a Desktop, Tablet or even a Mobile device. Ensuring that all the fun of the game can be enjoyed no matter where the player may be and the music that is heard throughout adds to the atmosphere.

There are 4 different shaped Gems that will reward players with the lowest pay outs in this online slots game. They are colored in Red, Orange, Blue and Green and land regularly to create winning combinations for players to claim.

All the other symbols are in keeping with the adventurous theme and include an Aztec Mask, a Totem Pole, a Blue Serpent and a Treasure Chest. All of them looking striking as they fill each position upon which they land while the games 5 reels spin.

Wild – the games Logo appears in bright bold colors and acts as the Wild symbol during this slots release from microgaming. When it falls onto the reels players will now see it change other icons if there is the opportunity to generate a winning pay line and any coins are then added to their jackpot balance.

Scatter – a Silver Circular symbol with Aztec lettering is used as the Scatter and is the key to activating a Bonus Round for players to take advantage of.

Rolling Reels – each time a winning combination is found across the reels all the symbols involved in its creation will fall from the screen. They are then replaced by others to provide players with more chances to add to their initial wagered amount.

Increasing Multipliers – an additional Feature is included with the Multiplier meter that is shown at the top of the screen. As soon as the reels reveal a win the pay-out receives a 2x Multiplier and as long as more pay lines are created players will see this gradually increase. So if the symbols land in the player’s favor they can receive up to 5x their stake which can mean quite a large return if they are betting the maximum figure allowed.

Free Spins – this Bonus Round is activated when 3x or more Scatter symbols are located across the 5 reels. Now players will be rewarded with 10x Free Spins with the opportunity to re-trigger the Feature if the Scatters land again.

The Rolling Reels Feature is also in play during this point of the game and the Multipliers are increased even further. Which means that players could claim an impressive 15x Multiplier if they continue to generate winning combinations.

microgaming have ensured that their recent release can be enjoyed by players of any level. And with a coin denomination ranging between 0.25 and 25.00 there are plenty of betting options in this online casino game. There are 25 winning pay lines to be found across the games 5 reels and various Features for players to enjoy.

Not only is there a Wild symbol to create more wins but also a Scatter which leads to a Free Spins Bonus Round. In addition there are Rolling Reels and an Increasing Multiplier which are all elements of this slots that has been enticing players since its release in September 2016.

If players need to be away from the screen or simply prefer to be less interactive with the gaming software there is an Auto Play option that they can utilize. All they need to do is go to the settings and then leave the reels to spin automatically.

Although this isn’t a very imaginative game the Jungle Jim: El Dorado slots does offer a RTP of 97%. Its fast pace heightened by the beautiful graphics and fun storyline that any player from around the globe can enjoy.