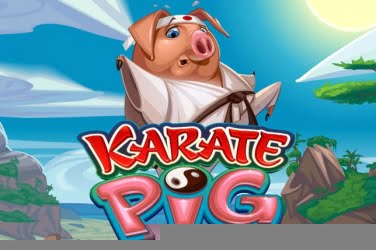 Microgaming casinos have given this online slots game an Oriental theme, and as the title suggests it is all based around the Martial Art of Karate. Released in March 2012 it is a 5 reel game with up to 40 winning combinations for players to take advantage of.

There is a humorous and cartoony feel to the game and all the symbols are bright and colorful. It has a funky soundtrack in keeping with the theme and at various points throughout Karate sounds can be heard.

Due to its early addition to the Microgaming online casinos this is a slots game that is only available to be played on Desktop devices. Even so there are still players from around the globe who it is proving to be popular with.

All the symbols within the game have an Oriental touch and include some cute characters. There is a Maneki Neko Waving Cat, a Plump Geisha Lady playing a stringed instrument, a Muscle Bound Samurai Warrior, a cute small Bear, and a Bearded Sensei figure to provide the Karate Pig with his words of wisdom.

Players can also find other symbols which are shown as a Bonsai Tree, a Shushi Bar, and a Gold Buddha. These are all able to provide players with more winning chances to create 1 of the 40 paylines that are on offer.

There is a Karate Pig Wild included in the game which is stacked across all 5 reels. They can be found easily and players will see that they can fill the reels to change other symbols to create more winning combinations.

The Hero Pig is also a Scatter symbol within the game and when 3 or more of these are located a Karate Bonus Game will be activated. This is where the player is required to complete certain rounds to be awarded with several different colored Karate Belts from White to Black. Their current levelled belt is shown at the top left hand of the screen so that the player can keep track of their progress throughout this stage of the game.

There are 2 elements of the Karate Bonus Game which must be played and the Black Belt level reached before the Final Showdown can be reached. Firstly there is the Pork Chop Bonus. Here players must choose 3 barrels from those that hang above the Pig’s head. He will then pull them down and Karate Chop them to reveal a prize to be included in the players winnings.

A Hammer Bonus is the 2nd Bonus Mini-Game that players can enjoy in this slots offering. Taro images will appear and players are asked which they wish to head-butt to reveal a random prize. The round continues until the player chooses a symbol which “stuns” the Pig and then they are returned to the base game.

Once the Final Showdown is reached players will embark upon a Karate fight which has 3x rounds. Though after each the player will automatically be moved forward should they win then they will receive a Bonus Prize. However when this Bonus Feature concludes then the players belt will be returned to White and they will be required to begin again.

In addition to this there is a 2nd Scatter symbol included in the game which is shown as a Gold Coin. This icon will only appear on the 1st and 5th reel but when they are revealed at the same time then a Free Spin Bonus Round will be activated. Not only can this be re-triggered at any point but will also award players with 15x Free Spins and all winnings given a 2x Multiplier

Coin denominations are very low in this Microgaming release ranging from 0.01 to just 0.10. And with only 40 winning combinations only low pay-outs can be expected in this online casino slots game. Despite this fact there are still players who enjoy its fast pace and entertaining Bonus Features.

Providing players with Stacked Wilds, Free Spins, 2x Scatter symbols and a 2x Multiplier there are plenty of chances for players to add to their initial wager. Along with this there is the Karate Bonus Round where players can enjoy 2x different Mini-Games to progress through the Belts until they reach the Final Showdown.

The Karate Pig slots is a high quality game and has a well thought out theme. So yet again Microgaming have created an online casino game that can be enjoyed by players of any level. 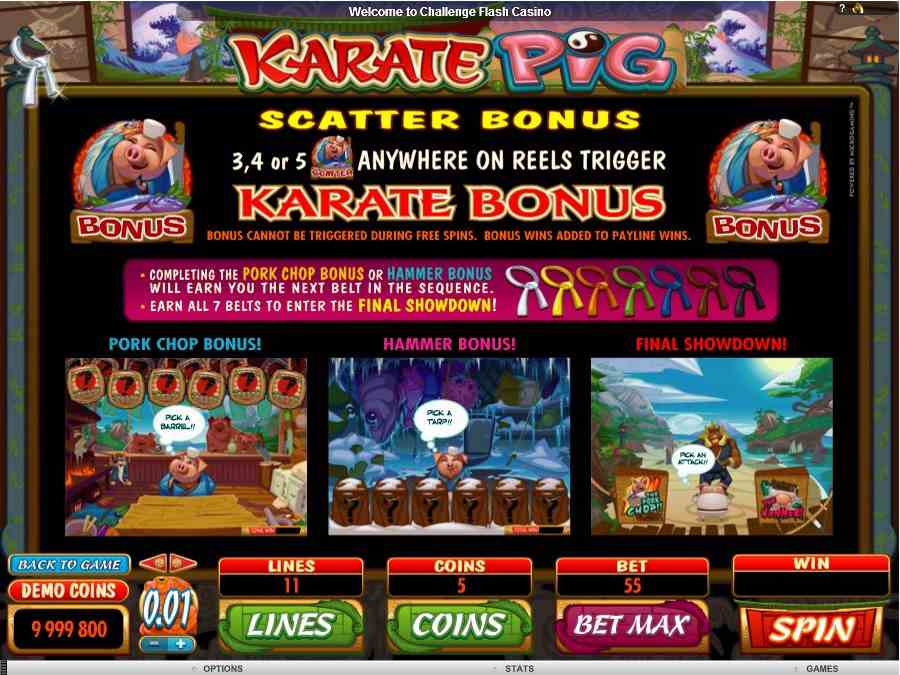 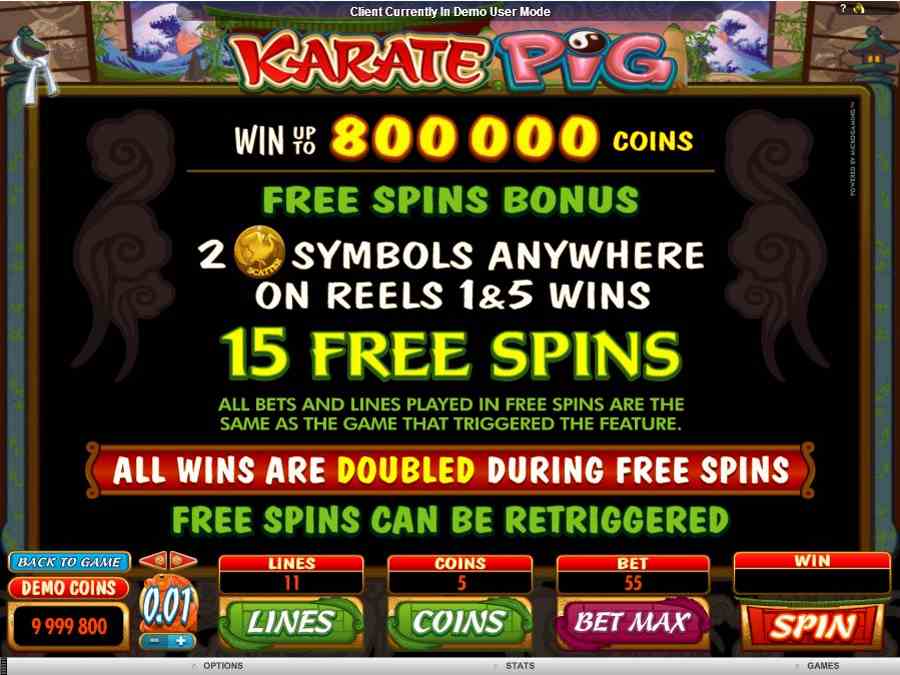 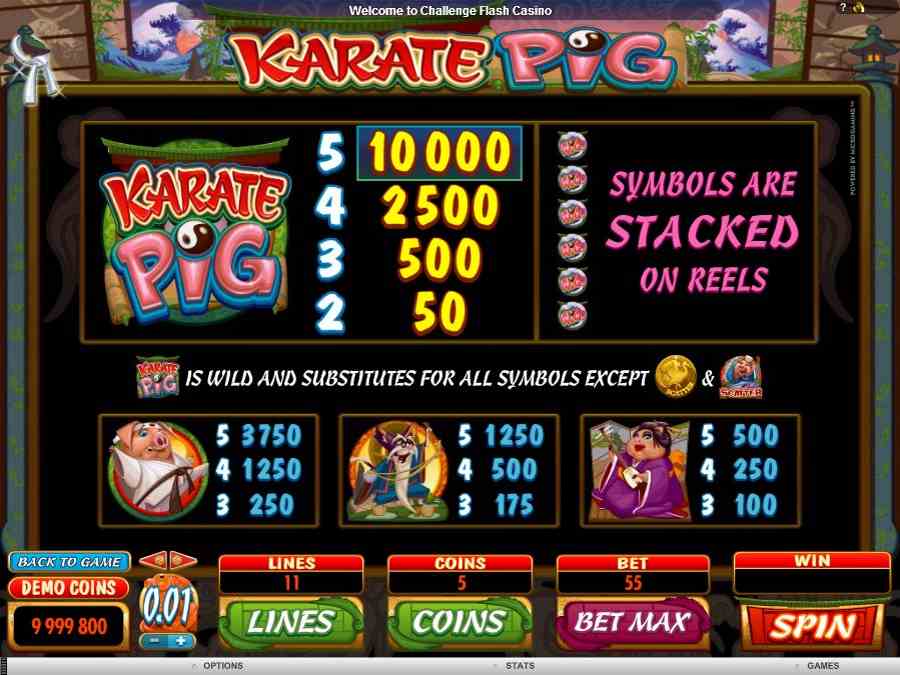 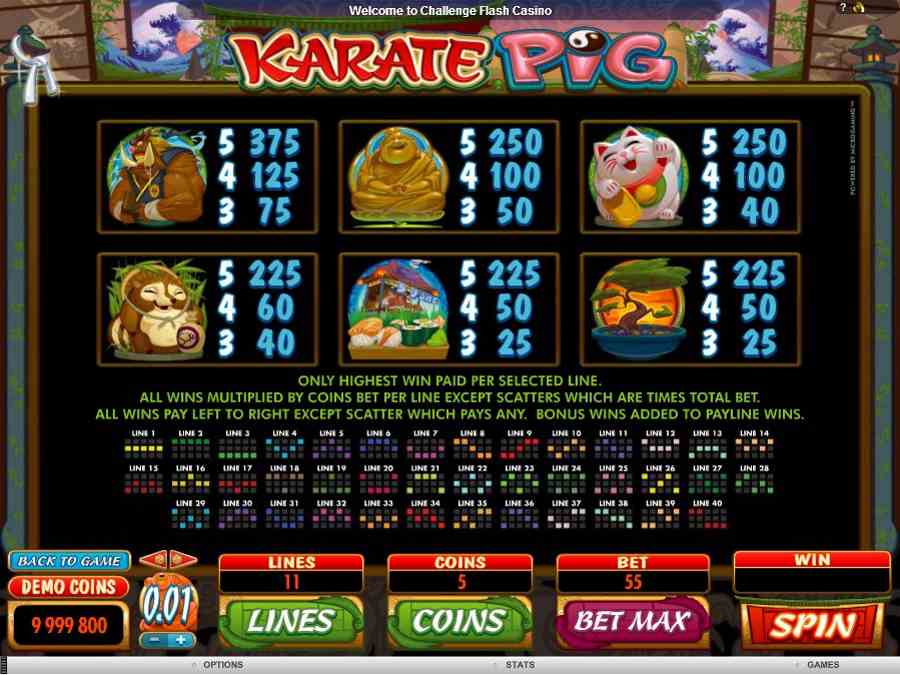 Karate Pig is a non-progressive 5 reel 40 pay-line video slot game from microgaming, it has a Karate theme, and comes with a wild symbol, scatter symbol, Multiplier, free spins and has a maximum jackpot win of $5,000