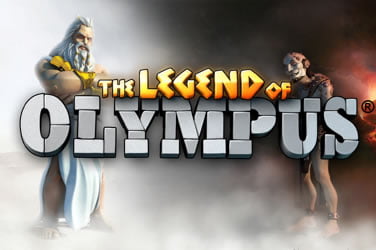 Microgaming have teamed up with Rabcat to create this latest addition to their online casino slots games. Legend of Olympus is set atop the infamous Mount Olympus where the Greek Gods were said to have gathered. Players can find the games 5 reels set within two towering columns, with ruins of a Greek Temple is depicted in the background. Zeus stands regally to the left of the screen, with the menacing Hades in his Underworld setting to the right.

The graphics used in the Legend of Olympus slots game are highly detailed, with clever animations which are in keeping with the theme of the game. Players can find symbols such as a Greek Soldier, a Chalice, a Spear, a Blonde Female, a Barbarian Warrior, a Shield, a Greek Helm, and the character Poseidon.

Zeus is the Legend of Olympus Scatter symbol and can be seen firing lightning bolts at Hades when he appears upon the games reels. Zeus is also the character required to activate the games two additional bonus Features.

Hades acts as the Wild in the game of Legend of Olympus. He wields the power to change other symbols to create more winning pay lines for the player. As the game as 20 pay lines which can be wagered upon, there are plenty of opportunities for players to add to their final pay-out amount.

Coin sizes in the Legend of Olympus slots game range from $0.01 to $2.00. This makes this Microgaming game popular with players of all levels from around the globe who enjoy online casinos.

Although as the games Wild symbol, Hades doesn’t offer a Multiplier when they are used in a winning combination. However he does have the ability to alter other icons across the 5 reels of the Legend of Olympus slots game. This can all help to generate further amounts to be added to the final jackpot figure.

The main character in the Legend of Olympus slots game is Zeus, who also acts as the Scatter symbol. When 3 more appear on the reels of the game lightning bolts are fired across the screen in his war against Hades. It is at this point that a Free Spin Bonus Round is activated. This particular round can also be re-triggered, meaning that players can take full advantage of the winnings on offer in this Microgaming online casino game.

There is a Bonus Gold Coin within the game of Legend of Olympus. When 3 or more appear upon the reels of the game the player is required to click on the symbol with the chance of revealing 2 further coins. Then the player can gain access to further chances of winning combinations to be found.

The Legend of Olympus slots game has been created with an additional Gamble Round. Players are able to take as long as they choose guessing the color of a down-faced card which appears on a second screen. If they are correct then a Multiplier is added to initial wagered amount.

Coin sizes begin at just $0.01 in the Legend of Olympus slots game. There are 20 pay lines to choose from across the 5 reels of the game and the highest bet range is set at $40.00. Meaning that this Microgaming creation can prove appealing to beginners to the world of online casinos. However with its additional Bonus Features, and the games Wilds and Scatters there are plenty of chances to add to the final pay-out amount.

The Legend of Olympus slots game is also available to be played in Expert Mode. This means that players can set the reels to spin either five or ten times automatically while they are busy with other things. Alternatively this Microgaming online casino game can be set to spin the reels until the wagered amount is met.

With its stunning graphics and Greek Mythological theme, the Legend of Olympus is enjoyed by players from around the globe. Popular with players of all levels, there are many opportunities to increase the final pay-out amount that can be awarded. Players can explore the realms of Mount Olympus, and the depths of the Underworld as they spin the reels of this Microgaming online casino game. 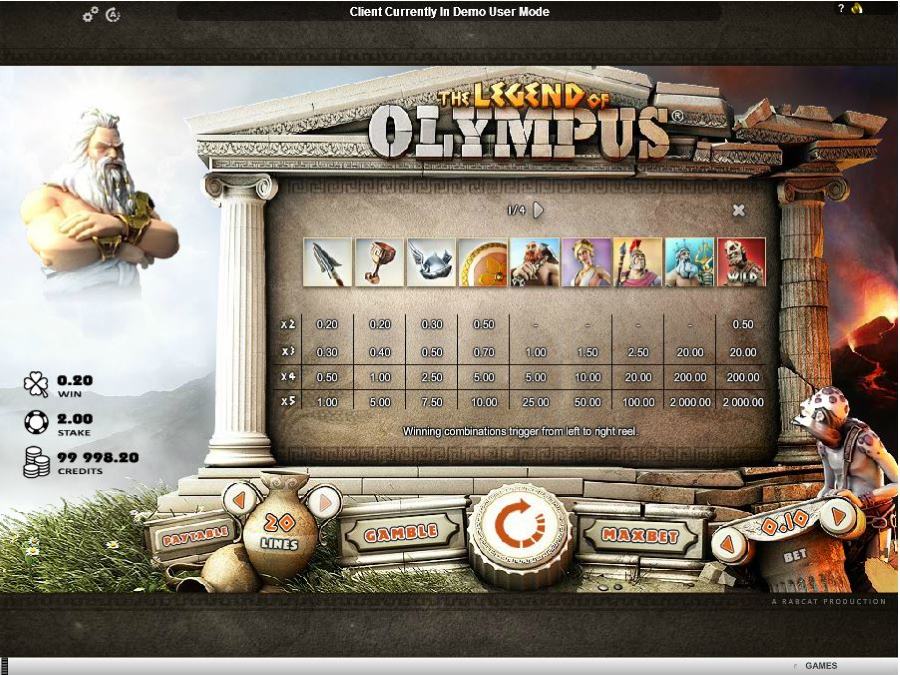 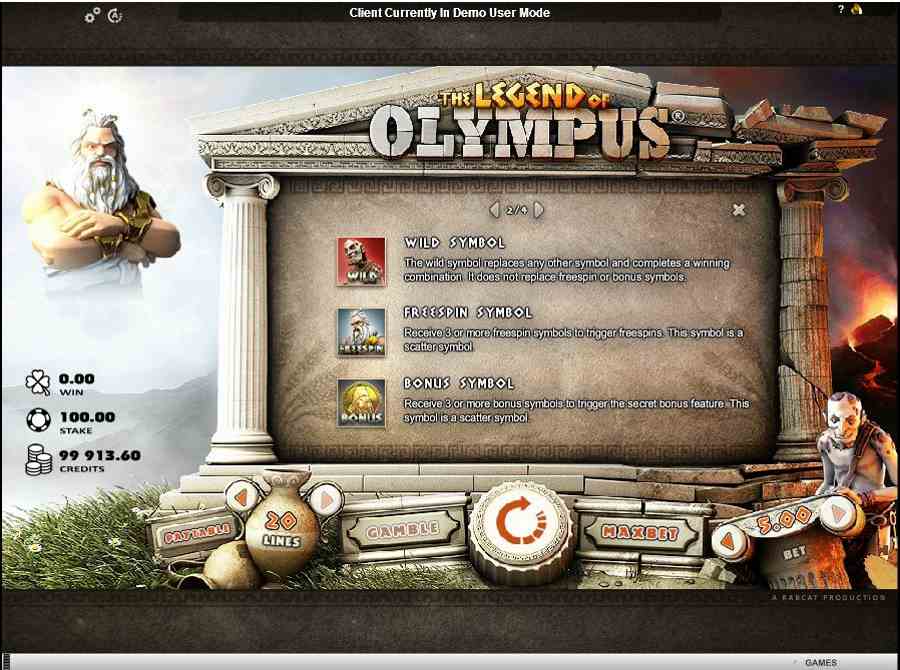 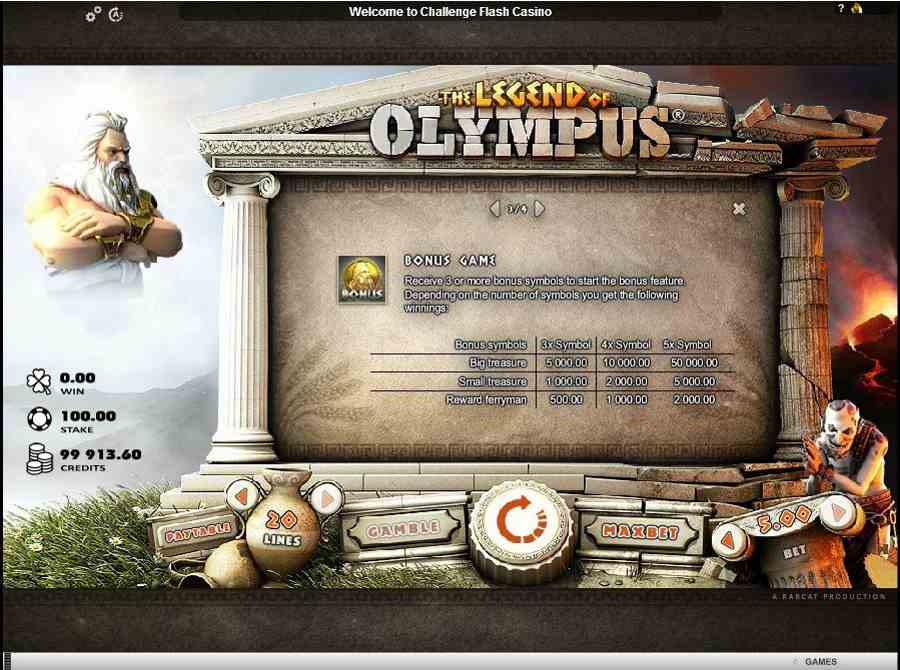 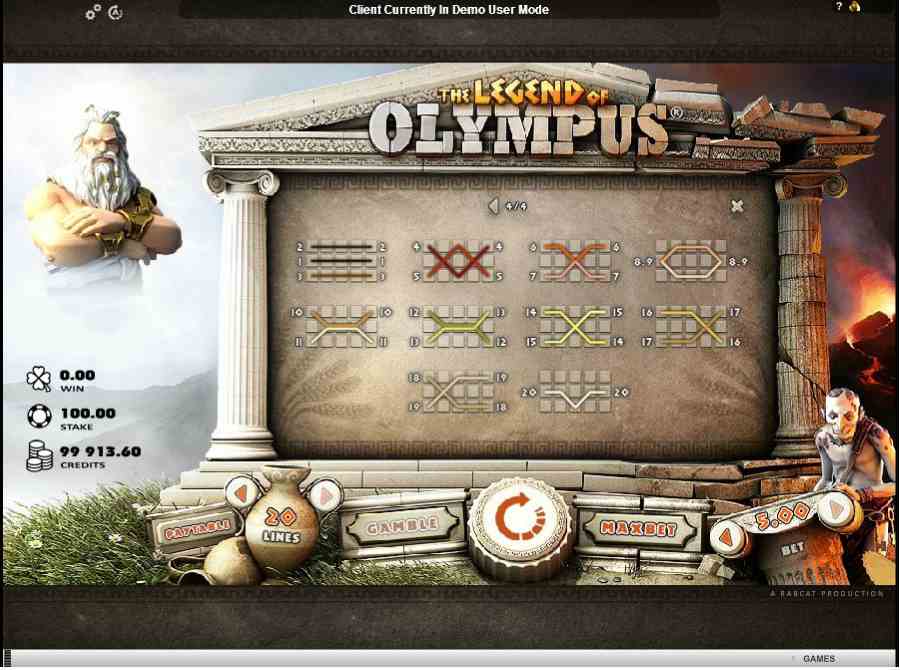 Casinos & Bonuses For Legend Of Olympus

Legend Of Olympus is a non-progressive 5 reel 20 pay-line video slot machine from game Rabcat, it has a Ancient Greece, Mythology theme, and comes with a wild symbol, scatter symbol, multiplier, free spins and has a maximum jackpot win of $40,000