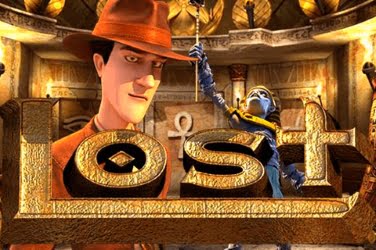 The Lost slots game has 5 reels and 30 winning paylines. It was created by Betsoft to be included in their online casinos. Players will immediately note its familiarity with the Indiana Jones films as they journey with the geologist and explorer Dakota Bones.

Set within the ruins of an Egyptian temple, Lost slots has detailed 3D graphics which enhance the atmosphere of the game. Dakota can be seen on the left of the screen, while various treasures are used as the game’s buttons.

Dakota is one of the main symbols in the Lost slots game. Players can also find an icon of his sidekick Faroog and his companion Monkey. There is also a symbol showing a Mummy of the Pharaoh King Ah-Amdad who’s Tomb the player will explore.

An Egyptian Staff is used as the Scatter in the Lost slots game and there is a Relic symbol which activates a Bonus Mini-Game.

Unusually for the majority of online casino games from Betsoft, Lost doesn’t have a Wild symbol. There are also no Free Spins on offer as a Bonus Round. However, this is compensated for by the additional bonus that is included in the game which provides a 3rd reel re-spin after each win.

The main feature to the Lost slots game is awarded to the player when activated by the Scatter symbol. This is depicted by an Egyptian Staff, but it will only appear upon the 3rd reel of the game. When this occurs the symbol will expand to fill the reel and any winnings that are collected will be given a 2x Multiplier.

Another way that players can increase their jackpot amount is with the Monkey symbol which appears in the Lost slots game. When 3 or more of the Monkey is spun upon the 5 reels then a Click Em Bonus Round will be activated.

At this point in the Lost slots games the player can select from various icons on the screen, all of which will reveal a random cash prize. Only when the “Collect” symbol is found will the player be returned back to the base game.

There is a further Mini-Game available in the Lost slots game. This is the Find the Treasure in the Mummy’s Tomb game. Players are only given access to this feature if they have been lucky enough to locate 3x Relic symbols upon the 5 reels.

Players are now asked to guide Dakota Bones through the doors in the Pharaoh’s tomb. During their journey players are able to collect various “treasures” before the round ends. All prizes are then added to the player’s jackpot balance.

Although there are no Free Spins Bonus Round in the Lost slots game, Betsoft has compensated for this with another Bonus Feature. After each winning spin players can watch as the 3rd reel spins once more. This can help to create additional winning combinations for players to include in their payout amount.

Alongside this, there is an increasing Multiplier awarded to the player after each winning spin. This begins at 1x the initial wager but increases one at a time until it reaches 5x. So the more a player wins, the more their winnings can be added to.

The first thing that gamers need to decide is how much they wish to wager on the 30 winning paylines that Lost slots has to offer. The coin sizes used in the game range from $0.02 to just $1.00 with a maximum of 5 on each line.

This means that the Lost slots game can be appealing to both low and high rollers. Bets can be kept low, while there are plenty of chances to create a winning combination. With the additional Bonus Features that this offering from Betsoft online casinos provides there are even further opportunities for players to maximize on their initial wager.

However, for players who are following the story of Dakota Bones and his Egyptian adventure then they will be watching the screen to see what Bonus Features they may have activated.

Players can take advantage of an Expanding Staff Scatter with a 2x Multiplier. There is the Monkey Click Em Bonus Round for more cash prizes. A Relic Mini-Game, and a 3rd Reel Re-Spin with increasing Multiplier after each win.

All the features and the pleasure of the Lost slots game is why this offering from Betsoft is popular with players from across the globe. 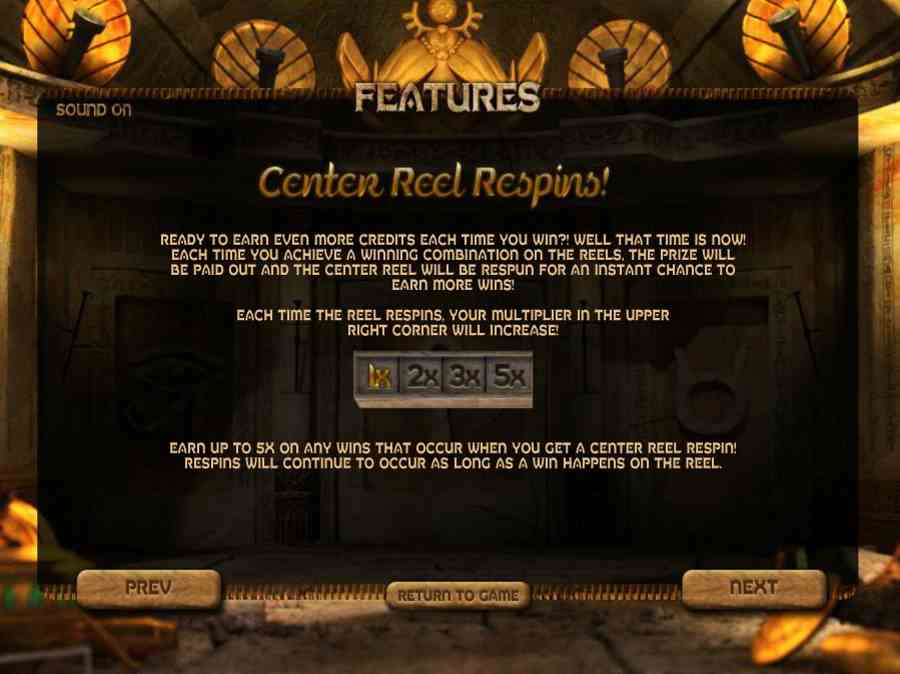 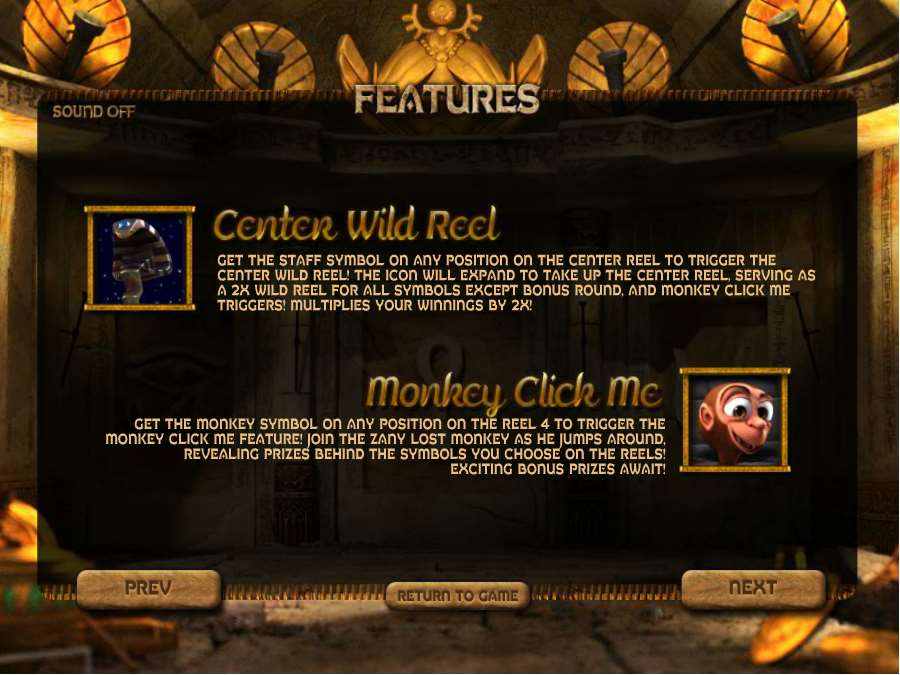 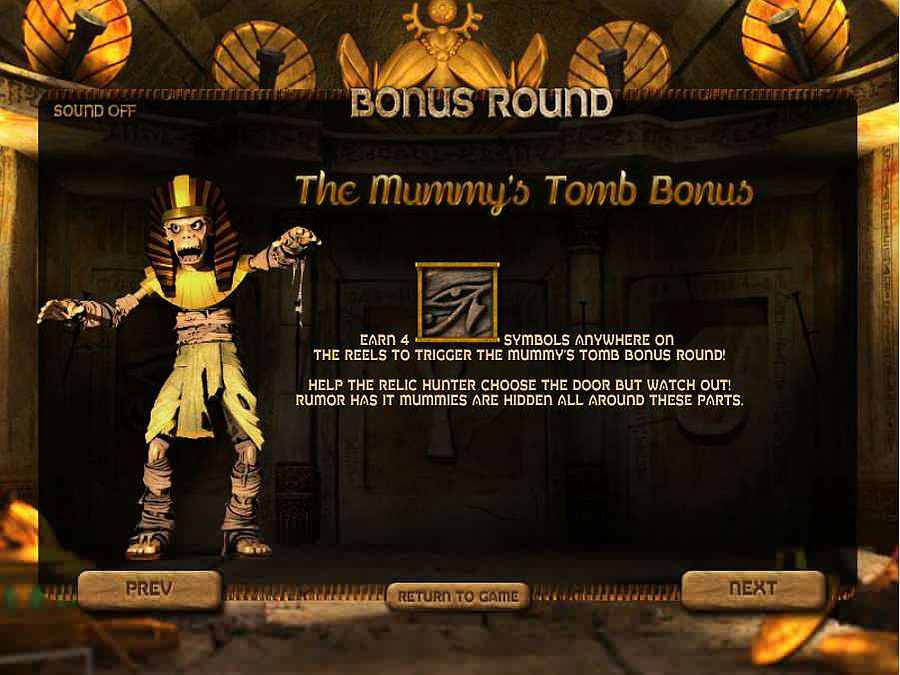 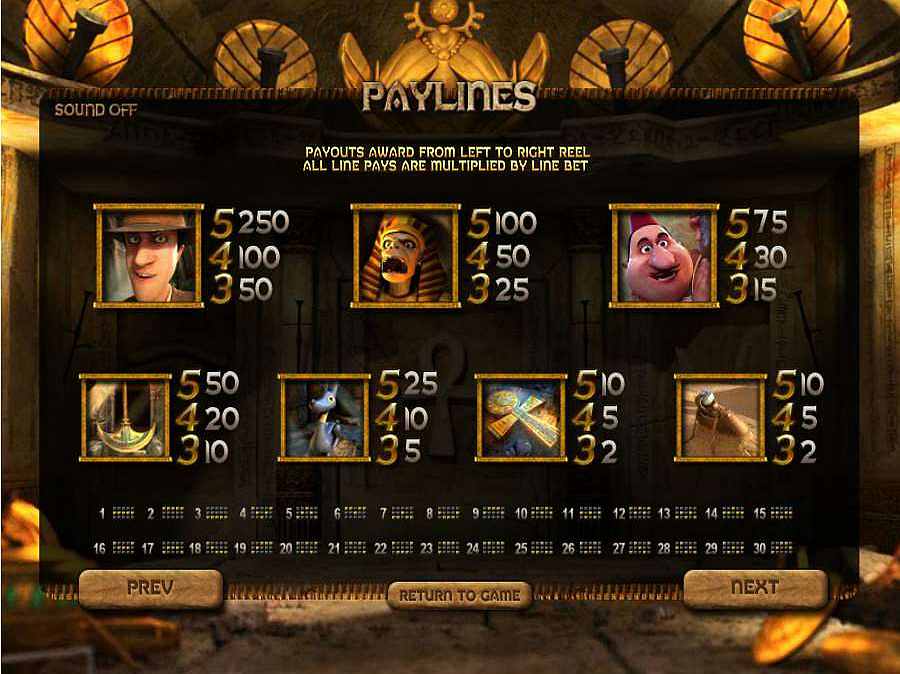 Lost is a non-progressive 5 reel 30 pay-line 3D video slot machine game from betsoft, it has an Egyptian theme, and comes with a, scatters symbol, Multiplier, free spins and has a maximum jackpot win of $7500