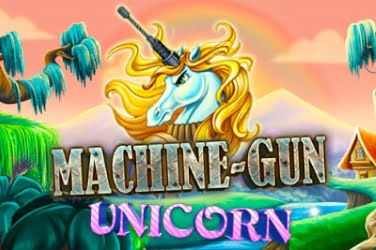 At the 2015 ICE convention this online slots was a finalist to receive the “Game to Watch” award. Released in July of the same year by Genesis Gaming it has a unique theme which is intriguing players from around the globe.

Players may at first think they are joining some cute little Unicorns when the game begins, until they realize that they are armed with weapons. These are needed to defend themselves against the Zombies who are trying to make the Unicorns extinct.

The story line plays out as the 5 reels spin showing numerous animations as the Unicorns battle and the Zombie heads explode. A character by the name of Machine Gun Unicorn acting as the hero of the tale as he defeats the attackers.

All the graphics have been beautifully designed using gentle shades of color. The 3D images and upbeat soundtrack both adding to the action packed atmosphere of the game. Transparent reels reveal the image of the Unicorn village with thatched cottages and grassy hills in the background and weeping willows on either side of the reels. Setting the scene for players to beginning this online casino game from Genesis Gaming.

Since its release players have been able to access the game on Desktop, Tablet and Mobile devices. So it is easy for players to enjoy all the fun that has been created in the Machine Gun Unicorn slots game wherever they may be.

All the symbols used in this game are in relation to the theme and so players can find 3x Glass Jars colored in Red, Green, and Blue each of which contains a different Zombie Head. There are also 3x armed Unicorns which are Purple, Pink and Yellow. And finally players can find a Green fire breathing Dragon who helps his friends in their quest.

The Machine Gun Unicorn character acts as the Wild symbol in the game but it can only be found on the 3rd reel. However when it does appear it is able to change any other symbol that has been located with the chance of creating a winning payline. In addition to this it will also activate the Symbol Bombs Feature that Genesis Gaming have included for players to take advantage of.

Now players will see the games hero fire at any Zombie Head symbols which are shown on the screen. As they explode a random cash prize will be awarded to the player, all amounts being added to their final jackpot balance.

If there aren’t any Zombie Head symbols on the reels at this point in the game players are simply given a consolation prize so it is still worth aiming for the only Feature that this online slots offers.

From 0.01 to 25.00 can be placed on any of the 10 winning paylines that this slots game has provided for players. This means that wagers can range from 10.00 to 250.00 on each spin so this is a casino game that is proving appealing to players of all levels. However as paylines can be created both from right to left and from left to right players have double the chances of adding to their initial stake.

The Machine Gun Unicorn Wild is the only Bonus Feature of the game and will allow the player to receive various cash rewards when it appears. With this being the only entertainment provided in this slots offering it may leave some players feeling disappointed.

Regulars to Genesis Gaming online casinos won’t find a Progressive Jackpot, Gamble Feature, Free Spins, Multipliers, or a Mini Game to enjoy in this slots game. Meaning that it could prove rather dull and repetitive for some although it could be appealing to beginners who can embrace its quirky theme.

Auto Play is an option for players who wish to be less interactive with the game should they choose. They are able to set the reels to spin automatically for a certain amount of times, or until the wager has been reached.

This slots game offers a RTP of 97.19% which is a popular element of the game that entices many players. However its dull format and lack of Bonus Features is something which may deter many from sampling this Genesis Gaming release. But with its smooth animations and ease of play there are numerous casino visitors who still search for the Machine Gun Unicorn slots game. 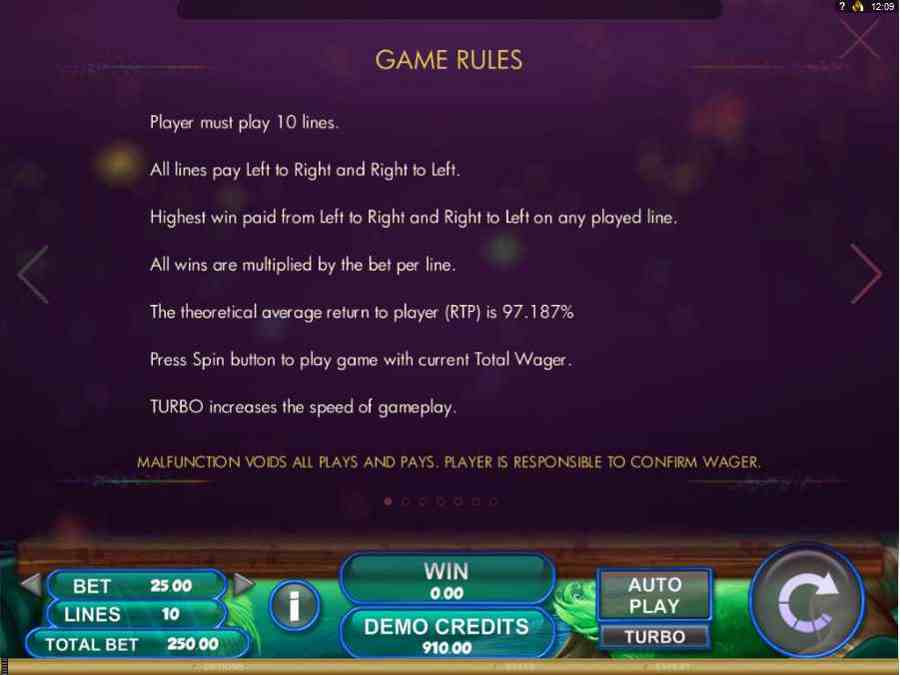 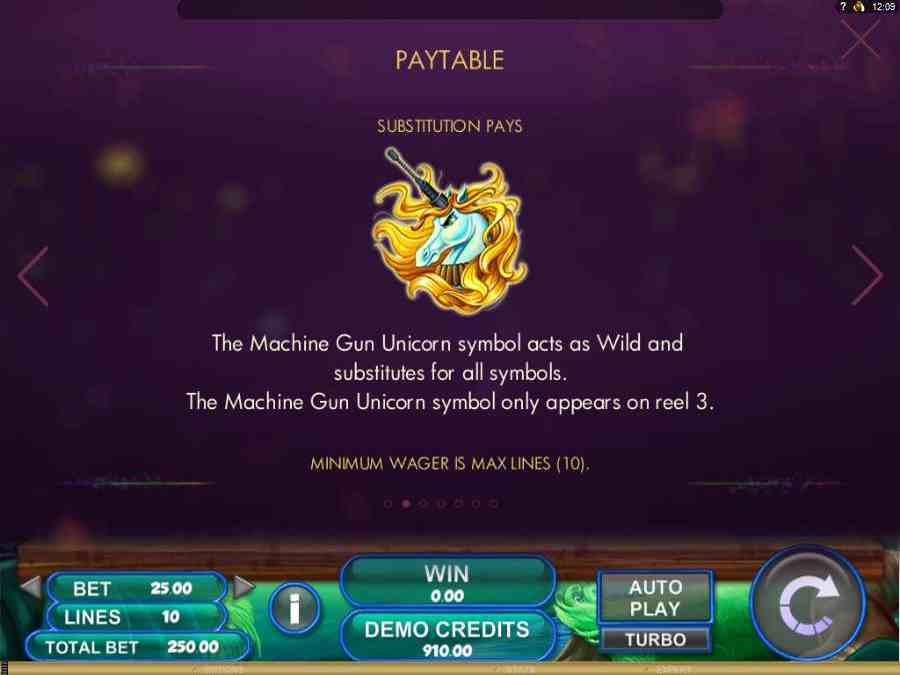 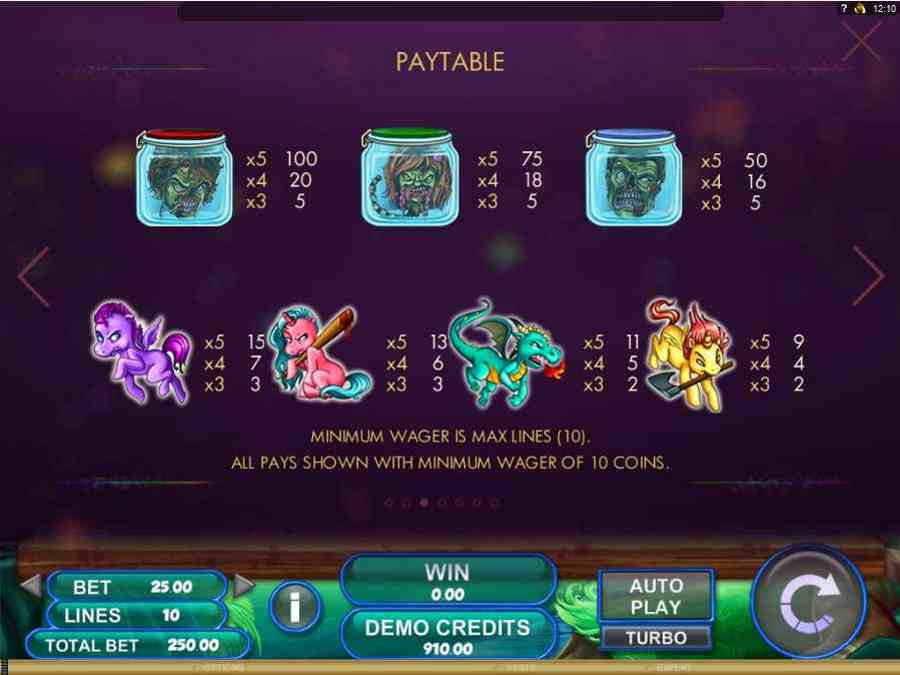 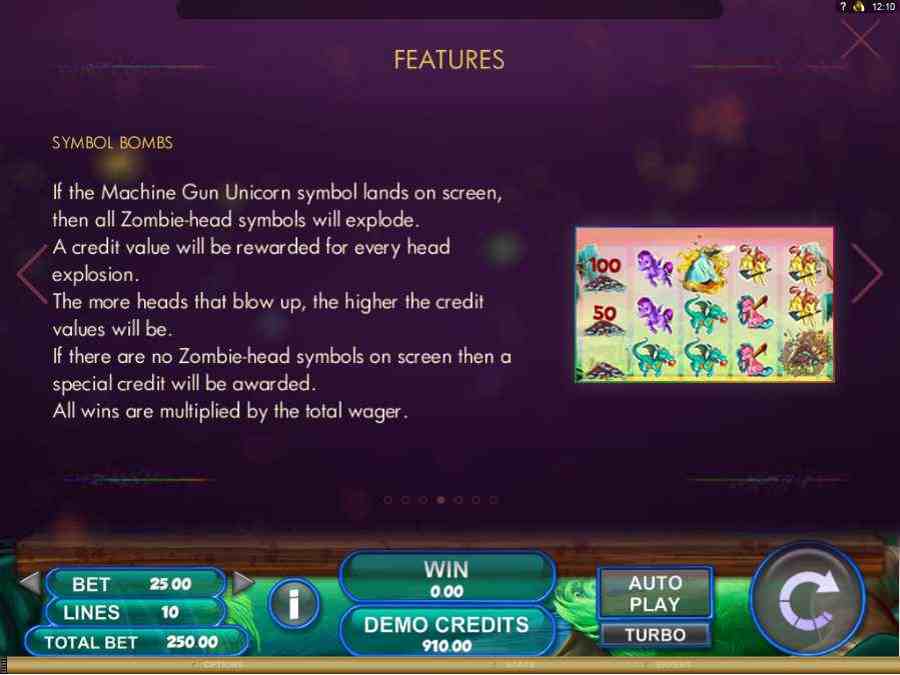 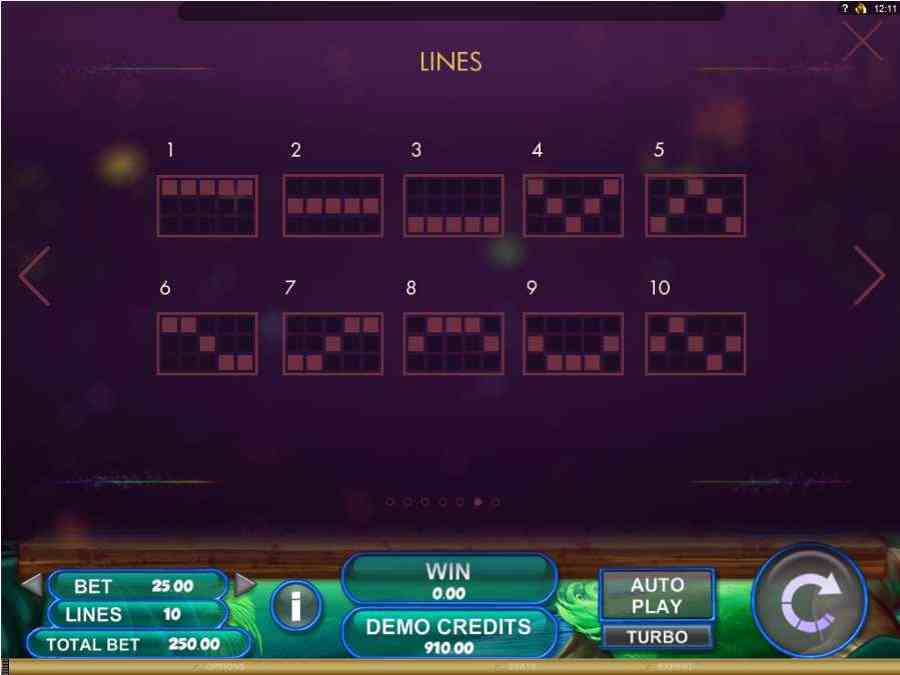 Machine Gun Unicorn is a non-progressive 5 reel 10 paylines video slot machine game from Microgaming, it has a Fantasy theme, and comes with a scatter symbol, and has a maximum jackpot win of $25,000.