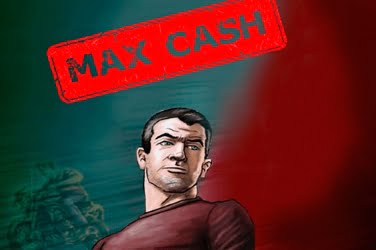 There are many slots games that have a Secret Agent theme and it is Max himself who is the man in question here. He is on the hunt for Ivan Draganov, an evil villain who is determined to take over the city. Jane Wild also features in this action packed story line as Max’s love interest and all 3 of these characters are used as high paying symbols in the game.

Released by Saucify in August 2012 the graphics that have been used may remind some players of an old comic book. The reels are set upon a divided background, one side colored green with an image of an agent riding a motorbike. In contrast there is a red side where players can see someone parachuting through the skies.

50 winning paylines can be created in this online casino game and each time this occurs the symbols become animated. It is a feature of the game which enhances the action packed atmosphere that is included in throughout. To add to this the engaging soundtrack is also in keeping with the Max Cash slots games theme.

Max is shown as a dark haired man with steely blue eyes and a rugged jawline. His is the highest paying symbol, quickly followed by Jane Wild and Ivan Dragavon.

Players will also find an agent riding a Motorbike, a man wearing Night Vision Equipment, a hand held Computer Device, a Bomb, and a Gun during the game.

Lower paying symbols are the Jack through to Ace icons which are often found in online casino games.

The Max Cash slots games Logo is used as the Wild symbol. Besides the Bonus Symbols this can change others upon the reels at random. This can provide players with more opportunities to create a winning payline and all amounts are also given a 2x Multiplier.

There are 2 Scatters included in this slots offering from Saucify and the first of these is Jane Wild. Here players will be rewarded with a Free Spins Bonus Round, the amount of which is determined by how many of them were revealed.

Players can activate this Bonus Round when at least 3 of the Jane Wild symbol appears on the screen and then take advantage of 9x Free Spins. This amount is increased to 12x and 15x if 4 or 5 Jane Wild images are revealed.

Ivan Draganov is used as the 2nd Scatter in the game and offers players varying Multipliers. 3 of these will reward a 10x Multiplier, which becomes 40x and even 200x when the reels are filled. It is a Bonus Feature that high rollers will find appealing as when the maximum amount has been wagered they could benefit from anything up to 50,000 additional coins being added to their jackpot balance.

Coin denominations begin at 0.01 in this online slots game, however this only rises to just 0.10. A maximum of 5 coins are allowed on each of the 50 winning paylines so this means that wagers can vary from 0.01 to 25.00. But even though the initial stake is rather low in comparison to other casino slots there are still various ways for players to add to their final pay out amount.

A Wild and 2x Scatter symbols are included in the game. When these are located upon the 5 reels players can be rewarded with Multipliers, Free Spins along with the chance to create more winning paylines.

The fact that all winnings are also given a 2x Multiplier means that this game is proving popular with both high and low rollers who enjoy the Secret Agent theme.

However there are many Bonus Features which have not been added to the games design. This means that players won’t find a Progressive Jackpot, a Gamble Feature or any Mini-Games to add to the thrill of the game. Even so there are players from around the globe who are engaging in this Saucify casino game.

Players who prefer to be less interactive with the software can activate the Auto Play mode that is available. Meaning that the reels can be left to spin automatically while the player is away from the screen. This can be for a certain amount of times or until the wagered amount is reached.

With an exciting and engaging storyline there are many players of all levels who are taking advantage of all there is to offer in the Max Cash slots casino game. 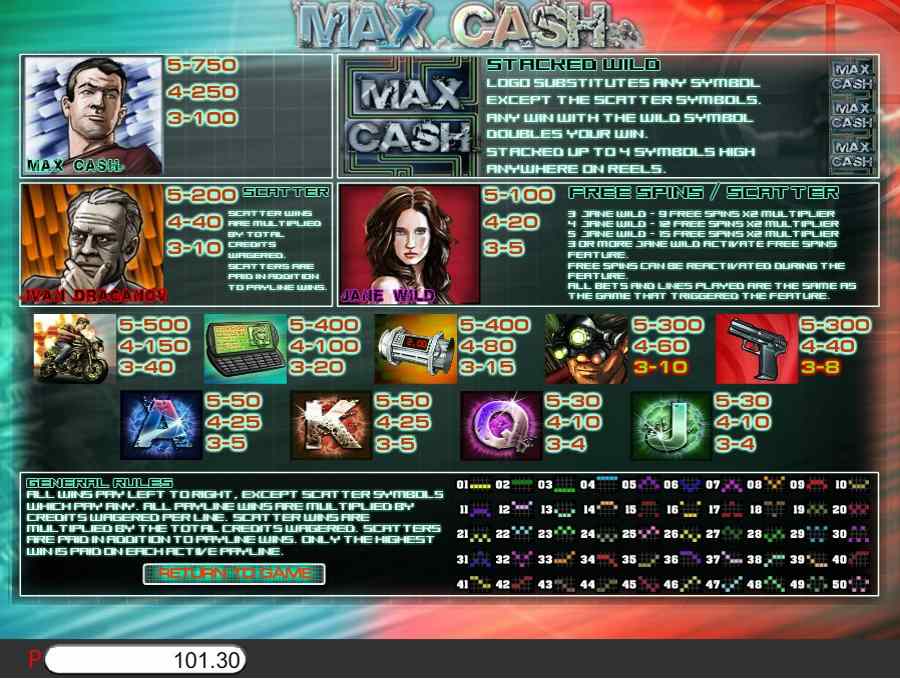 Max Cash is a non-progressive 5 reel 50 pay-line video slot machine from Saucify, it has a crime theme, and comes with a wild symbol, scatter symbol, Multiplier, free spins and has a maximum jackpot win of $7500