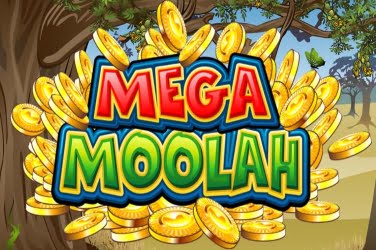 This online slots game was released by Microgaming in 2006 to appear in their many casinos. Mega Moolah has an African Safari theme, and the background design makes players feel as if they are under a scorching sun. Along with the fun tunes and graphics, the Mega Moolah slots game is popular among players from across the globe.

The Mega Moolah slots game is slightly different to Microgaming’s usual format. Although it has the standard 5 reels, Wilds, Scatters and other Bonus Features it also has an amazing 4 Progressive Jackpots. This attracts many high rollers who enjoy online casino games.

Symbols are in keeping with the Safari theme. Upon the games reels there are Lions, Monkeys, Giraffes, and Elephants to name just some of the animals that can be found. There are also the usual 10 to Ace symbols to spin for further wins throughout the game. All are brightly colored to enhance the gamers playtime.

Beginning at just 0.01, the coin size rises to 0.05 in the Mega Moolah slots game. Players can place up to a maximum of 125 coins upon the 25 winning paylines for each spin of the reels.

The Monkey symbol is used as the Scatter in the Mega Moolah slots game. They are stacked across all 5 of the games reels, and when 3 or more are spun the Free Spins Bonus Round is activated.

During this round the player is awarded 15 Free Spins, which can also be re-triggered at this time. This Bonus Round also provides a 3x Multiplier on any of the players winnings.

Wilds can also be found while playing the Mega Moolah slots game, and are depicted as the Lion. The coin pay-out that the player will receive depends on the amount of Wilds that are spun. If just 2 are found, the player is given 15 coins. 3 Wilds gives 125 coins. This rises again when 4 Wilds are spun, up to 1500. However, the highest amount of 15000 coins are won if 5 Wild symbols appear across the reels of the game. Whatever the winnings are at this point, they are doubled with the Wilds that are in the Mega Moolah slots game.

Although there is no Gamble Bonus Game included in the Mega Moolah slots game, there is a random Bonus Round. When this is activated, a Spinning Wheel appears. The Wheel is split into 7 colored sections, and the amount awarded with depend on the color on which the needle lands. These amounts are in relation to the progressive jackpots that this slots game provides, and the wager amount that has been played.

A total of 125 coins can be wagered upon the 25 winning paylines that the Mega Moolah slots game has. Along with the 4 progressive jackpots that it also boasts, there are plenty of opportunities for players of the game to win big.

Monkey Scatter symbols move the gamer to the Free Spins Bonus Round. Along with the 15 Free Spins, winnings are tripled and the round can be re-triggered. This can help to increase the player’s final pay-out amount considerably.

The games Lion Wilds also offer more ways to win in the Mega Moolah slots game. Not only are all winnings doubled, there are many base game jackpots that can be won here.

As well as these, there is also the Wheel Spinning Bonus Round and the 4 progressive jackpots during play of the Mega Moolah slots game. The jackpots are referred to as Mega, Major, Minor and Mini. How much the player wages will reflect the jackpot amount that they can achieve.

Though players of all levels can enjoy the Mega Moolah slots game, it is more for those who are prepared to bet high to get the maximum pay-outs. With so many ways to win and higher winning amounts than some other online casino games, it is definitely worth a try. 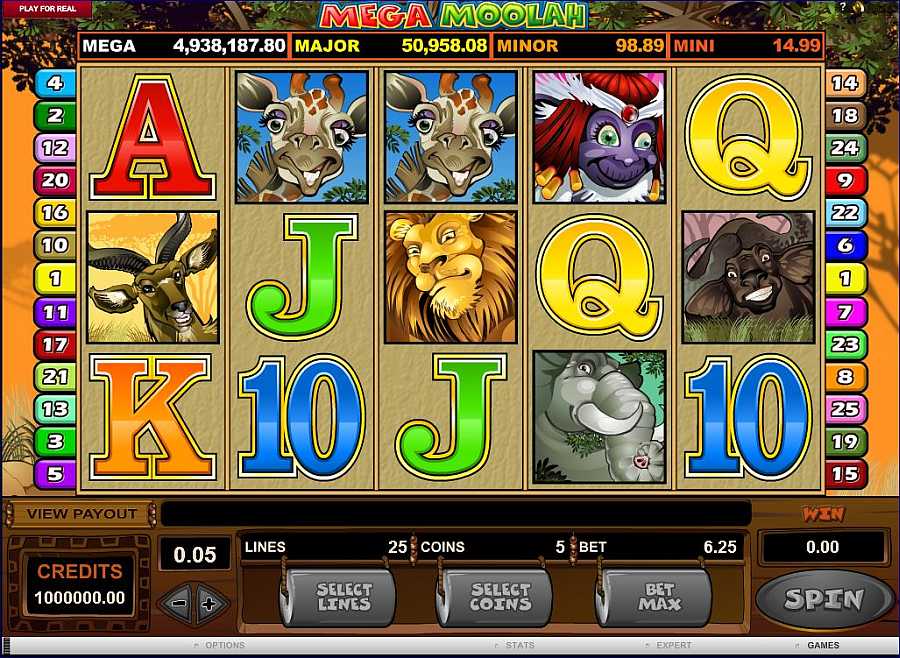 Mega Moolah is a progressive 5 reel 25 pay-line video slot machine game from microgaming, it has a African Safari theme, and comes with a wild symbol, scatter symbol, multiplier, free spins and has a avg jackpot win of $31,000