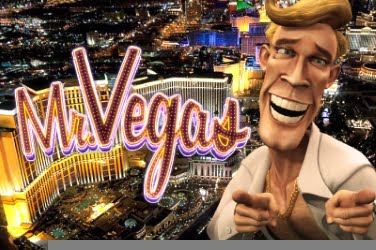 With a Vegas Casino theme, the Mr Vegas slots game provides lots of fun for its players. It has been released by Betsoft and has a more glamorous feel to its design compared to others that can be found in online casinos.

The 5 reels of the game are encased in gold and the “Mr Vegas” sign can be seen at the top of the screen. Players can absorb the Las Vegas element of this slots game with its 3D graphics and soundtrack playing in the background.

All the symbols that are found in the Mr Vegas slots game have a cartoony look to them. Their animations when a winning combination is found adding to the fun of the game.

Mr Vegas himself is the main character in this slots game and his symbol is located on its reels. There are also two females who accompany him when he visits this Betsoft online casino which are further icons that are found.

The Mr Vegas slots game uses various other symbols during play. These include a Waiter, a Croupier, and a female Exotic Dancer. Players will also find some Champagne, Betting Chips, and a Roulette Wheel.

There are also Bonus symbols included in the Mr Vegas slots game. Shown as Slot Machines, a Pair of Die, and a Money Wheel these provide players with further opportunities to add to their final winning amount.

Although there is no Wild symbol used in the Mr Vegas slots game, there are still plenty of additional Bonus Features on offer for players to take advantage of. For example there are two different ways that a Free Spin Bonus Round can be activated during the main base game.

During this Free Spins Bonus Round all winnings will be given a 2x Multiplier which can also aid in adding to the players final pay out figure. And there is also the chance to re-trigger the round if the Pair of Die symbol appears again across the 5 reels of the Mr Vegas slots game.

A further Free Spins Mini-Game can be found in Mr Vegas slots. This is activated on a 2nd screen when 3 or more Slot Machine symbols are located. The player will then be able to play the Mini-Game in the hope of creating more chances of winning combinations.

Mr Vegas himself can award the player with further cash prizes. This is available when 3 or more of the symbols are spun to then be taken to a Roulette Mini-Game. Here the player can wager against Mr Vegas in the hope of winning additional cash amounts.

Another feature which can be found in the Mr Vegas slots game is the Progressive Jackpot that is available. However, players must be wagering the maximum amount to have the chance of collecting these winnings. The only way to claim this figure is through the Money Wheel Bonus Feature.

Certain symbols in the Mr Vegas slots game have a Money Wheel icon shown in the corner. When 5 appear at any point over the reels then a Mini-Game is activated. A Money Wheel will show to the player, and once spun will reveal a random prize. This could be Free Spins, a cash amount, or the Progressive Jackpot balance at that point in the game.

Players of any level can enjoy the fun which the Mr Vegas slots game has to offer. As the coin sizes are kept between $0.02 to $1.00 it is appealing to low rollers. Yet with its various Bonus Features and the chance to win the Progressive Jackpot it is also proving popular with high rollers as well.

With 30 winning paylines, players can wager as much or as little as they please across the Mr Vegas slots game 5 reels. Then they can set the reels to spin in the hope of adding to their jackpot figure.

There are plenty of opportunities to increase their final pay out amount. This can be done with the Free Spins, Multipliers and Mini-Games that Mr Vegas slots provides. The highly detailed graphics and fun soundtrack all adding to the atmosphere that this Betsoft online casino game offers. 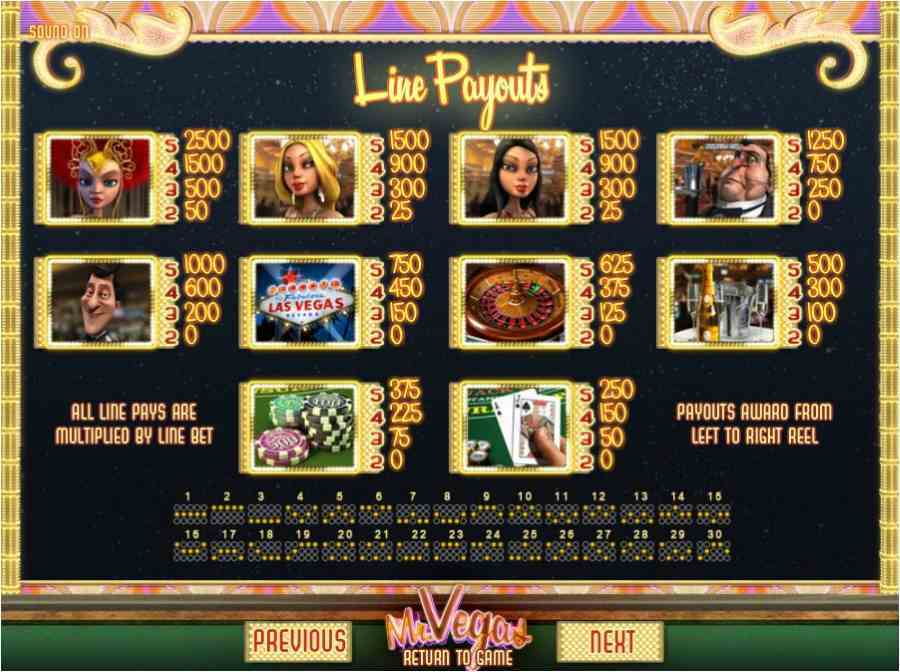 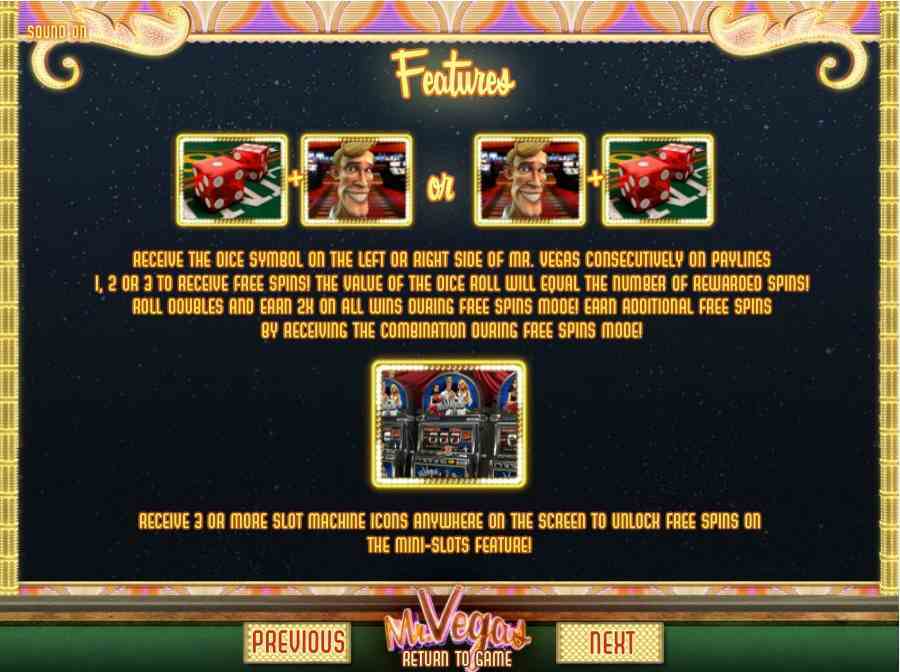 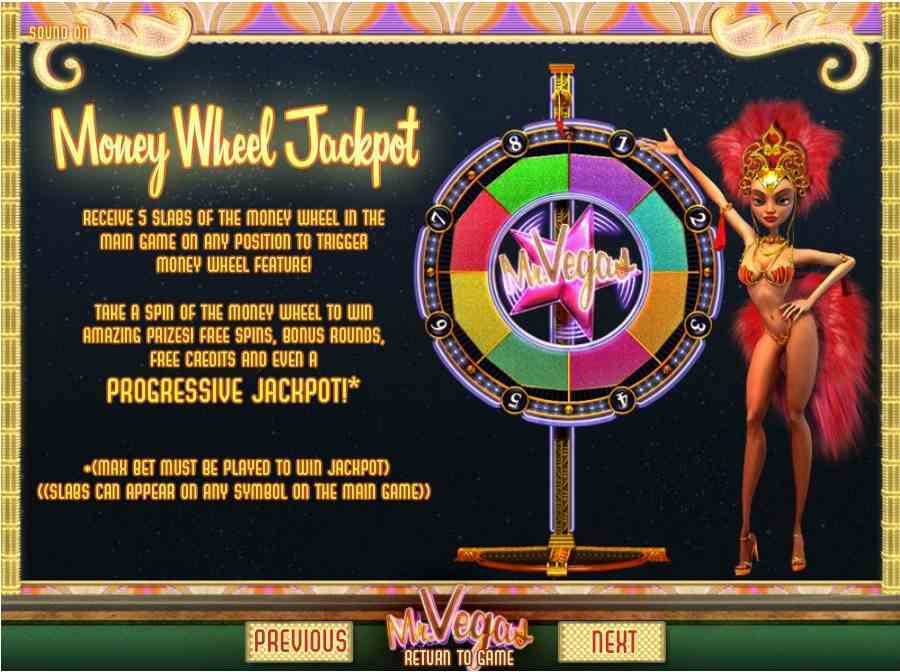 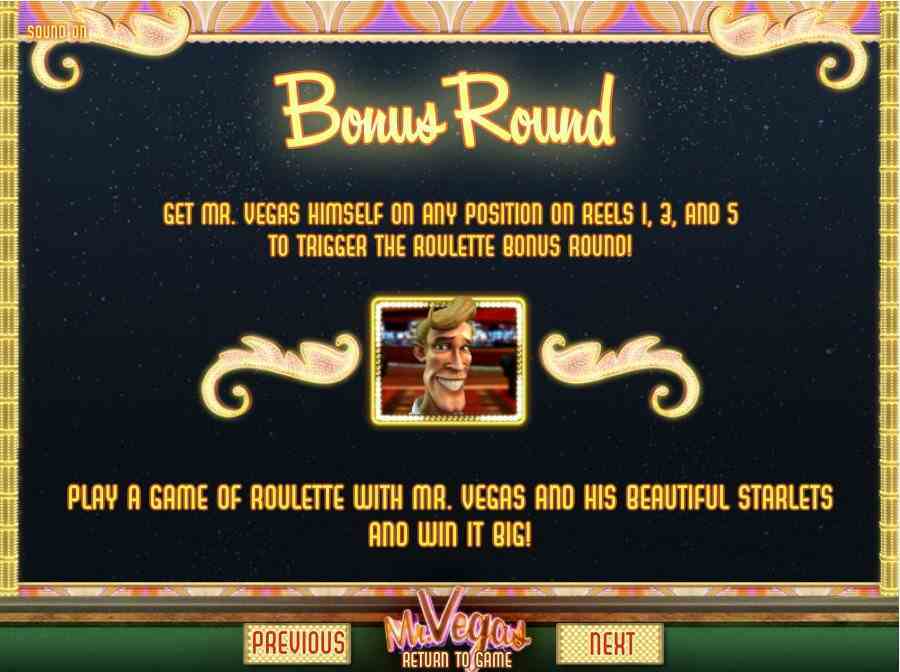 Mr Vegas is a non-progressive 5 reel 30 pay-line 3D video slot game from betsoft Gaming, it has a Las Vegas theme, and features free spins and has a maximum jackpot win of $7,500