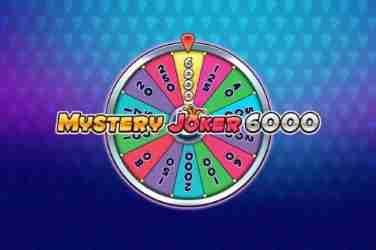 Mystery Joker 6000 slots is a December 2017 release from Play N Go that is a definite upgrade from the original version. Here players will find a deep blue background upon which sits 3 reels with 3 rows. The symbols appear as if floating upon the shiny silver reels along with the bright vivid colors that have been used in its design.

The game has an old-style look reminiscent of the classic Fruit Machines often found in bars and there is an upbeat soundtrack for players to enjoy while they watch the reels spin. Even the digital figures to show the remaining balance and any jackpot amounts have been given a retro appearance. All players need do now is to locate matching symbols so that they can create any of the 5 structured pay lines that are on offer in this online slots.

It is possible to access this online casino slots via Desktops, Tablets and even Mobile devices, should players be away from home and still want to play this game. Although there is no Wild symbol there are 2 Bonus Features to keep players entertained throughout the game.

All these icons are in keeping with the games Classic theme and include the typical fruits of Cherries, Watermelon, Lemon and a bunch of Grapes. Along with these there is also a Gold Star, and Gold Bell which offer slightly higher winnings. But for players to be able to claim the game’s biggest jackpot they need to spin all 3 Red 7’s to receive 20x their bet.

Wild – there is no Wild symbol used in this online slots game.

Joker Bonus Symbol – a Joker’s Hat can be found on all 3 of the reels and they are needed for players to activate the games Feature.

Mystery Wheel – during the base game if only 2 Joker symbols land on the screen then 1x Re-Spin is given to the player with the chance of them rolling a 3rd. Should this happen or if the full 3 originally appeared then 1x Free Spin is rewarded to allow players an additional chance of locating a winning pay line and can offer prizes of up to 6000x coins.

Super Meter – in an unusual twist there are 2 different modes of play in the Mystery Joker 6000 slots game. But before the 2nd mode can be selected players must first generate a winning combination.

Now they can opt to press the Green Upward Arrow button on the Control Panel at the bottom of the screen. If they choose to do this players will see their winnings being added to the Super Meter. And although any further wagers will be doubled so are the pay outs that are given.

Also during this part of the game the Mystery Wheel Feature becomes enhanced which is a further element to this online slots that players can take advantage of. Just 2x symbols that show the Joker’s Hat are needed for players to receive the usual 1x Free Spin that this online slots offers.

But should all 3x fall into position then the maximum 3x extra spins are allocated to the player along with an additional 6000x coins. This can result in some decent returns on whatever initial wager was staked on any of the 5 winning pay lines being added to the players final jackpot balance.

Before the Base Game can begin players must first decide on how much they would like to bet on the 5 structured pay outs that this game boasts. For those on a limited budget this could be as little as 0.10 but for others who are more daring the maximum wager can rise to 100.00. And with a wide range of coin denominations the +/- button is a useful tool so that players can select their desired amount.

Although there is an Auto Play Feature included in the games format it must be pointed out that the Super Meter element of the game can’t be accessed. So although this form of play may be convenient for some they may miss out on some bigger wins while using it.

Should players remain in the Base Game Mode they can expect a RTP of 92.22% but if the Super Meter is used this will rise to an extraordinary 100.96%. A combination of the 2 different modes results in an average RTP of 94.96% which is still impressive compared to other online slots available.

It should be noted that this is a High Variance online game so players will need to keep any eye on their balance. They also need to be prepared to wager all their winnings if they want to cash out with a substantial amount, but only if luck is on their side in the Mystery Joker 6000 slots. 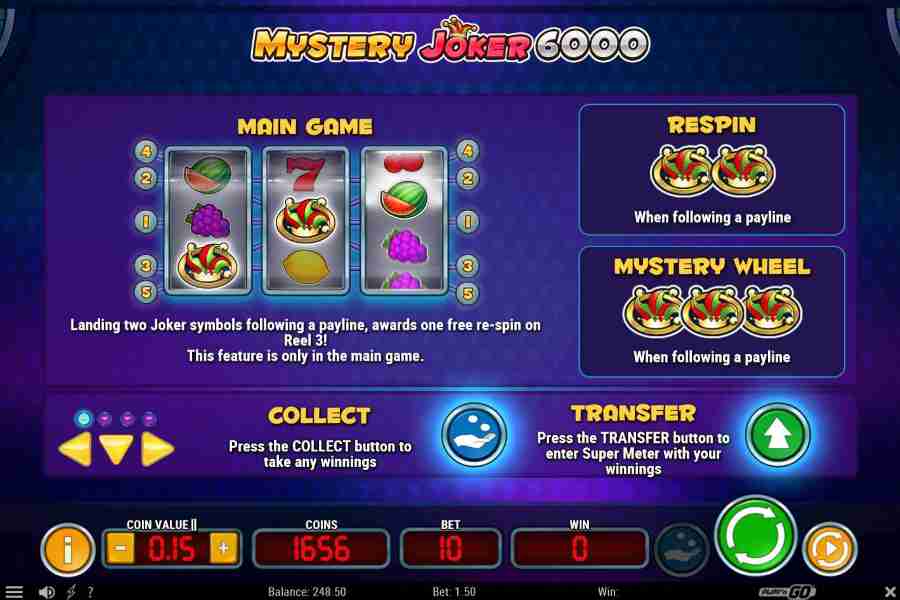 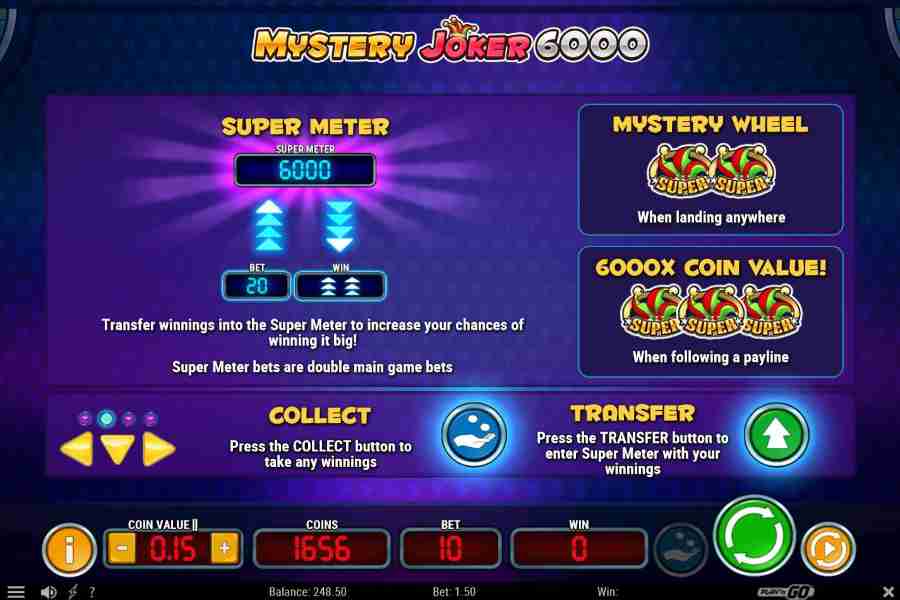 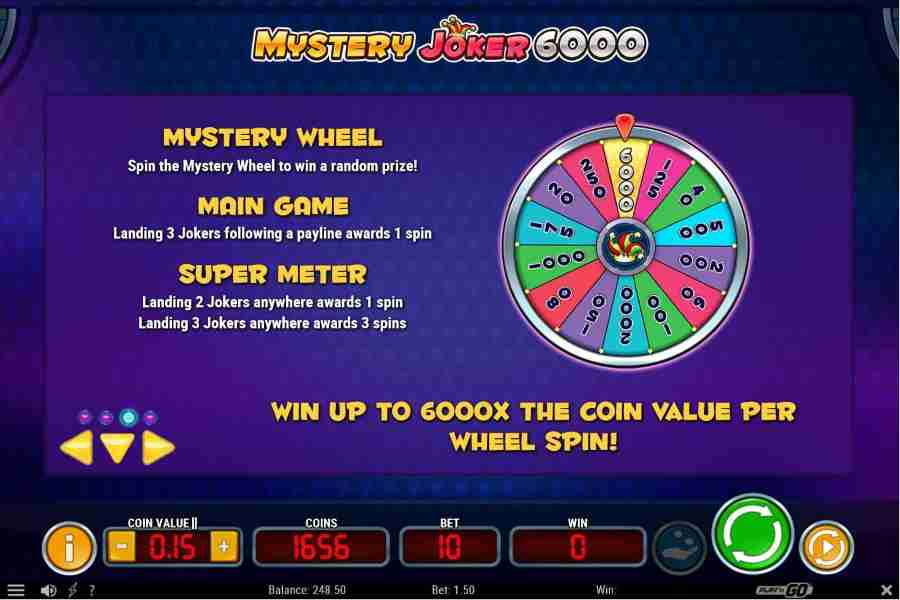 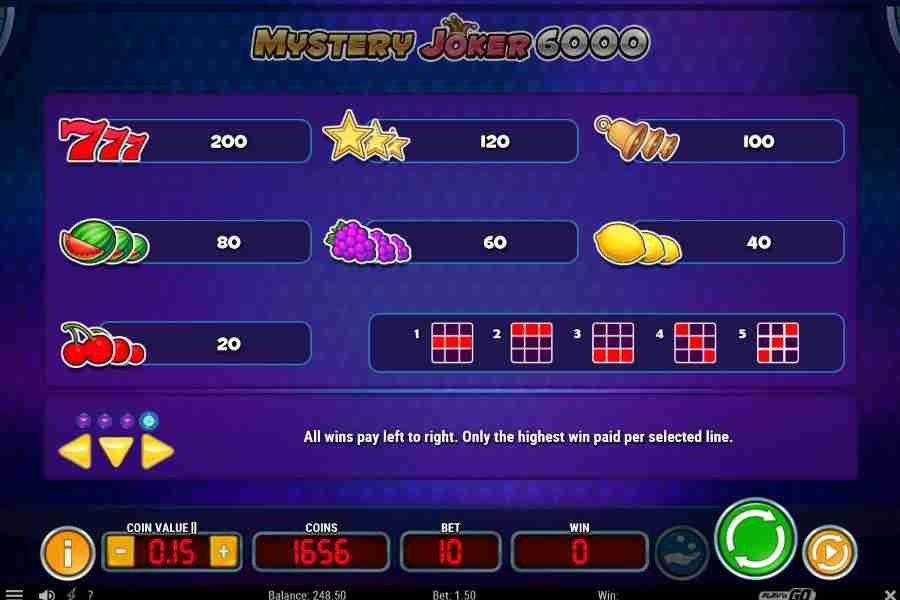