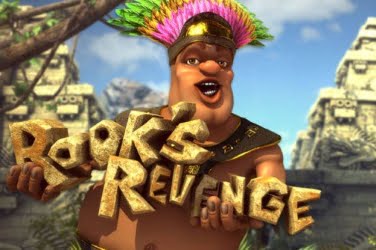 There is a Mayan theme to the Rook’s Revenge slots game. Its 5 reels are set within a South American jungle showing a Chieftain to the right and a temple in the background beneath a vivid blue sky. Designers have placed the reels among a bamboo frame with tendrils of undergrowth twisted around the edge.

All the graphics used in the Rook’s Revenge slots game are in 3D and are full of bright vibrant colors. In addition to this there are appropriate tunes to be heard during game play which adds to the fun atmosphere.

Each symbol in the Rook’s Revenge slots game is of a Mayan God, its image set in stone and defined by their different colors.

A large golden Question Mark which is encrusted with gems is used as the Wild symbol in the Rook’s Revenge slots game. There is also a Golden Mask Scatter, which can provide players with further chances to increase their winnings.

Alongside the main base game, players can take advantage of Free Spins and Multipliers in Rook’s Revenge slots. Something which regulars and beginners to the world of Betsoft online casino games will find appealing.

One of the main Bonus’s which players of the Rook’s Revenge slots game can take advantage of is the Exploding Symbols Feature. This is whereby any symbols which are part of a winning combination will explode and fall from the games reels to allow others to fill the space. Meaning that there are even more chances of winning in this Betsoft online casino game.

With each winning spin a Progressive Multiplier is also awarded to the player. This will begin at 1x the wager and increase to up to 5x the initial amount placed upon each payline. All monies are then added to the final jackpot amount.

When the Question Mark Wild symbol appears on the reels of the Rook’s Revenge slots game it is able to change other icons to create more winning combinations. Any amounts are then added to the final pay out figure which the player can then claim at the end of the game.

There is a Golden Mask symbol which acts as the Scatter in the Rook’s Revenge slots game. It can only be found on the 1st, 2nd, and 3rd reels, but if even two are spun the player will receive a cash prize.

However if 3 or more Scatters are revealed in the game of Rook’s Revenge slots then the Bonus Round is activated. At this point of the game players are awarded with 25 Free Spins and the chance to receive a higher Multiplier if a winning combination is spun during the round. These Multipliers will increase from 3x, to 6x, 9x and then 15x the player’s original wager.

Players have up to 25 winning paylines to choose from in the Rook’s Revenge slots game. Before spinning the 5 reels they can place coin on any of these using coin denominations from $0.02 to $1.00. As players can wager up to $125 with each spin the game is popular with both high and low rollers.

The various Bonus Features which are also available in this release from Betsoft are another reason why the Rook’s Revenge slots game is appealing to players. They can take advantage of numerous Multipliers which can increase up to 15x the bet amount. There are also 25 Free Spins awarded to the player should the reveal 3 or more Golden Mask Scatter symbols.

In addition there is an Exploding Symbols Bonus Feature, and a Question Mark Wild. Both of these can help to create more winning combinations, and therefore add to the final jackpot figure even further.

There are players of all levels from around the globe enjoying the game of Rook’s Revenge slots. Taking a journey through the South American jungle while collecting winnings along the way. The Mayan themes and the music used only adding to the atmosphere of the game.

Surprisingly for most BetSoft online casino games it is not possible to play Rook’s Revenge in Auto-Play. Although the volume can be adjusted, players need to remain fully interactive with the reels of the game. But with all the Bonus Features that are available this is not something likely to deter many players who enjoy the thrill of online slots.

Rook’s Revenge is a non-progressive 5 reel 25 pay line video slot machine game from betsoft, it has a South American jungle theme, and comes with a wild symbol, scatter symbol, multiplier, free spins and has a maximum jackpot win of $6250