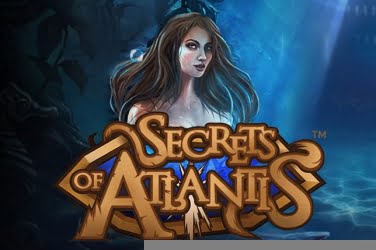 Clearly this slots is inspired by the legendary tale about the Lost City of Atlantis and its ruins are depicted in the games background. Players are taken underwater while the sun’s rays light up the 5 transparent reels. The Control Panel is set upon the sea bed as soothing music helps to create an ambient atmosphere for players to enjoy during the game.

The fact that there are 4 rows in this online slots adds a different element that isn’t found in many casino games. However this does allow for there being more winning combinations to be spun and there are 40x on offer here.

If players can get online whether via a Desktop, Tablet or perhaps by using their Mobile device they can access an entertaining deep sea game with this nautical release from Net Entertainment. And as always they have used the highest quality graphics in its design while ensuring a smooth game play can be enjoyed throughout.

A Crab, a Sea Turtle and a Jellyfish symbol can bob onto the reels in their air bubbles to reward players with the lowest pay outs when used to create a win. For a higher return players need to search the reels for the Gem symbols that can be found. They are colored in Red, Blue, and Green and all set in different shaped ornate frames.

The real treasure can be claimed however if the player is lucky enough to spin 5x Oyster and Pearl symbols. Now they will see an impressive 400x their stake being added to their jackpot balance. And for those wagering the maximum amount this could mean some big wins can be had in this online slots.

Wild – a stunning Mermaid with flowing dark hair is the symbol here and she can change any other symbol that is used in the game. In addition to this she also hides 2 Bonus Features to entice players to dive deeper into the game.

The 1st of these is brought into play if the Mermaid Wild swims onto the screen to land Stacked to fill the entire reel. This provides further chances for the player to create more winning combinations to see their jackpot balance increase.

However if only 1x of the symbol appears on any of the 5 reels it will become a Nudge Wild which is the 2nd Feature that players can take advantage of. It is at this point in the game where the symbol will Nudge either up or down in its position if a pay line can be located.

Highlight Feature – players will notice that the symbols on the central 3 reels can randomly be lit brighter than the others during the game. If 3 matching images are “highlighted” during any spin then they will merge to create a 3×4 Colossal Symbol.

Now players will receive 1x Re-Spin which could result in another win or the possibility of re-triggering the Bonus Round if more Colossal Symbols land on the reels.

As with the Mermaid Wild this symbol can also become a Nudge Wild so that it can move its position with the chance of filling the entire reel.

The first thing players need to do is decide on their bank balance before setting their initial wager. There are 40x structured pay lines in the game but wins can be formed from both left to right and right to left so this is something to consider. However the coin denomination ranges from 0.20 to 200.00 with each spin so anyone can enjoy this slots no matter what their budget may be.

Despite the fact that there are no Free Spins or Multipliers included in the games format the Bonus Features that are available more than compensate for this. The games designers have provided a Mermaid Wild who not only Expands, but can also be a Nudge symbol to generate more wins.

A Colossal symbols Re-Spin Round is the main attraction to this watery themed slots game. Here players can hit some big wins while regular smaller pay outs make this a Medium variance release that is proving popular with players of all levels.

For those who need to be away from the screen Auto Play is an option. But the relaxing atmosphere and steady pace of the Secrets of Atlantis slots game is keeping players from around the globe entertained while they watch their jackpot grow.

– Try Secrets of Atlantis here for a free spin or visit NetEnt Casinos to play for real money. 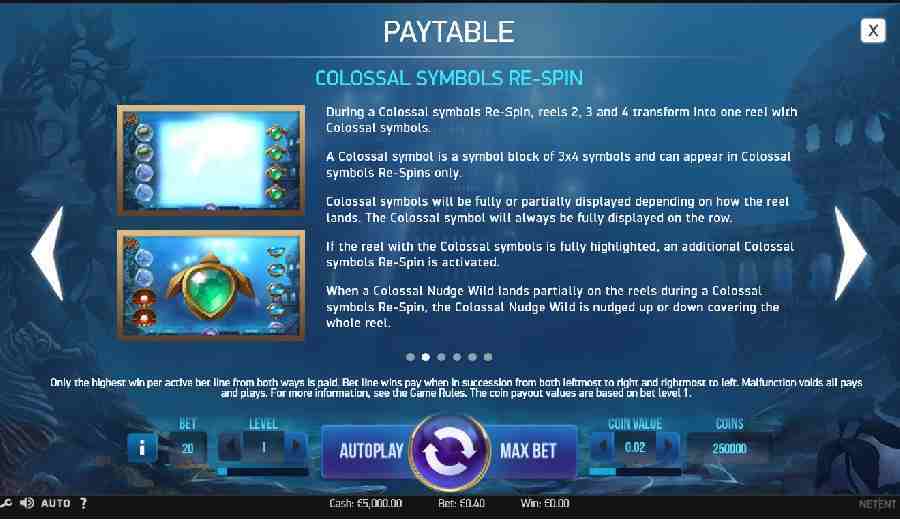 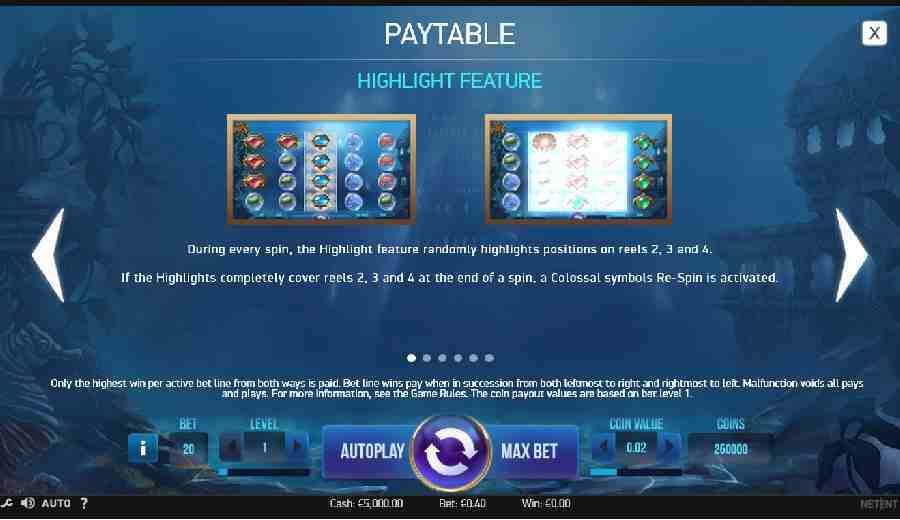 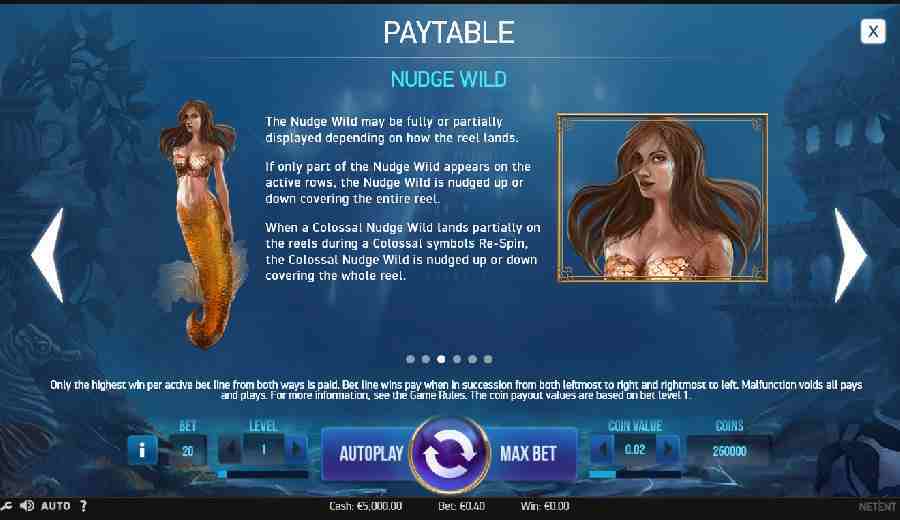 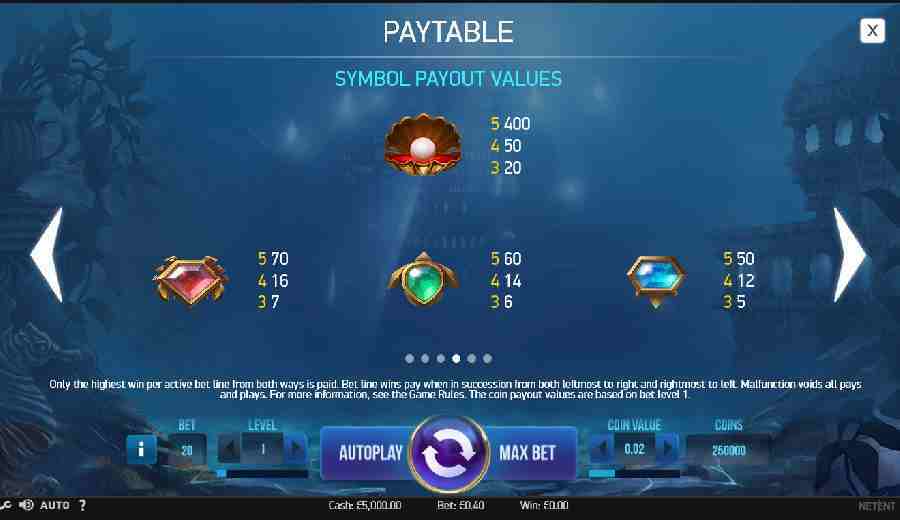 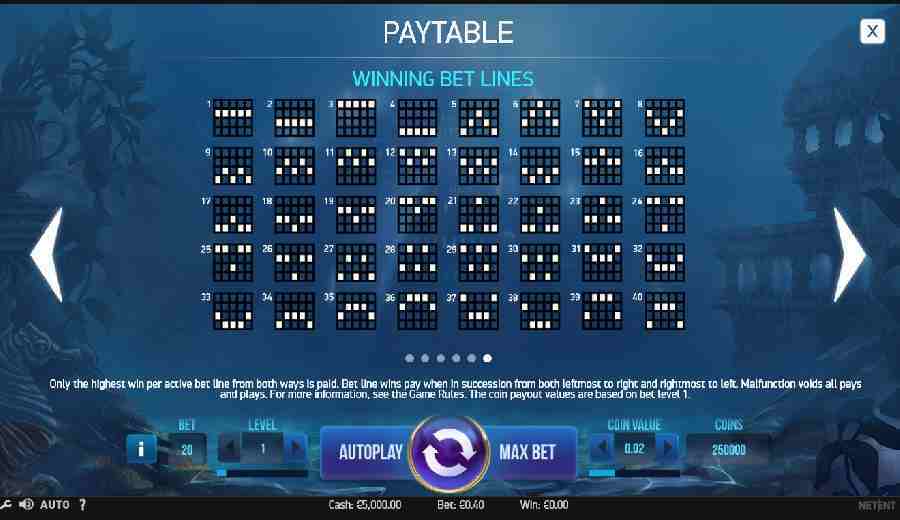