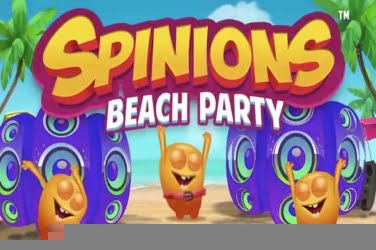 Players may be reminded of the Minions from the Despicable Me movies that are now known worldwide when they travel to the Beach in this online slots game. Set on a Tropical Island the 5 transparent reels show large bold symbols that can create any of the 25 winning pay lines that are on offer here.

With the sea in the background and a warm deep blue sky at the top of the screen, players can take in the party atmosphere as the Spinions dance under the palm trees that can be seen on either side of the reels.

The Spinions Beach Party slots game is full of fun animations and when a winning combination is located on the reels the little orange characters will cheer happily. It is a cheerful game that can be enjoyed on any device. So whether using a Desktop, Tablet or Mobile players can join the Spinions at any time no matter where they may be.

As in many online slots, Quickspin has used the card symbols 10 through to Ace as the lowest paying symbols in the game. They have been given a chunky design and their colors are bright and bold.

Players will also find various cocktail drinks on the reels which have been made using the type of fruits you would expect to find in this warm climate. They are made using a Pineapple, a Coconut, a Watermelon, and an Orange.

However, it is the Magnum of Champagne symbol that awards players with the highest win. When 5 of these appear across the screen players can expect to see 200x coins being added to the final jackpot balance which is a great bonus to this slots game.

Wild – a Spinion is used as the Wild symbol in the game. If just 1 of these is located during any spin it is able to change any other besides the Scatter. This gives the player more opportunities to create a winning pay line.

To add another fun element to this latest release Quickspin have also included the Spinion Wild symbol in both Bonus Rounds that the game boasts.

Scatter – players can find a brightly colored “Bonus” symbol within a blue circular frame on the 1st, 3rd, ad 5th reel during the game. When all 3 reels are filled then players will activate the Free Spins Round which offers further chances for their initial wager to be increased.

Spinions Sticky Wild Re-Spin – if 2 or more Spinion Wild symbols are revealed then players will find that they become “sticky” to remain in play while the reels are spun again. This Bonus Round will continue until no more Wilds are found but plenty of decent wins can be claimed during this point in the game.

Beach Club Free Spins – all 3 “Bonus” Scatter symbols need to be on the reels for players to receive 10x Free Spins. Although this feature can’t be retriggered any Wilds will become “sticky” so there are numerous chances for players to add to their winnings.

The first thing that players need to do before setting the reels to spin is to decide how much they would like to wager. Quickspin has given a wide coin denomination range so players can place anything from 0.25 to 100.00 with each spin. However, as this is considered to be a High variance game it does mean that some players may need to keep an eye on their budget despite the 96.05% RTP.

By providing 25 structured paylines this slots game is proving popular with players of all levels. And with a Spinion Wild, a “Bonus” Scatter and 2 Bonus Rounds to take advantage of there is plenty to keep players entertained.

Quickspin has included an AutoPlay feature within this slots release. This means that it is a convenient element to the game that could prove useful to those who need to be away from the screen for a while. So players can set the reels to spin automatically for a certain amount of times, or alternatively until the maximum wager is reached.

Although there isn’t a Progressive Jackpot to aim for, or a Gamble Feature to try after a winning spin, players won’t be left disappointed with this Tropical Beach themed game. It has a cheerful feel and the vibrant atmosphere is added too by the funky soundtrack and sound effects. So players with any budget can join these happy little characters and enjoy the celebrations in the Spinions Beach Party slots game. 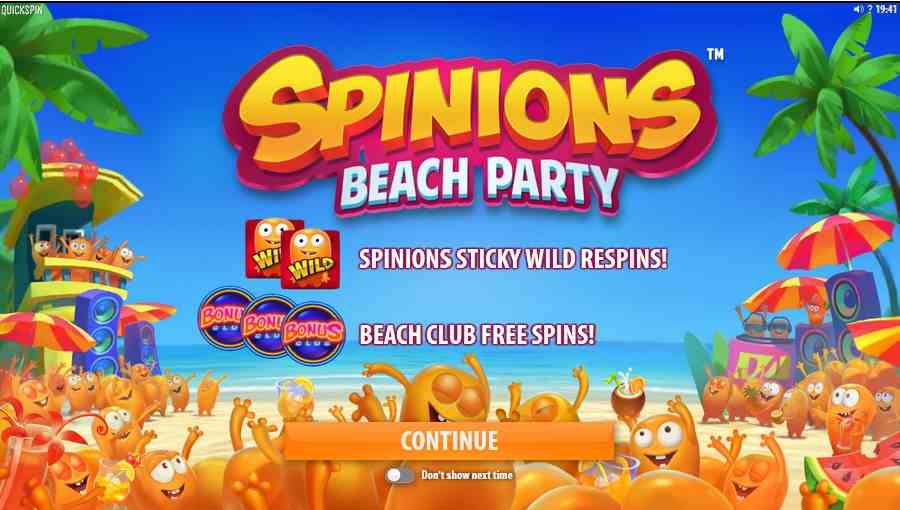 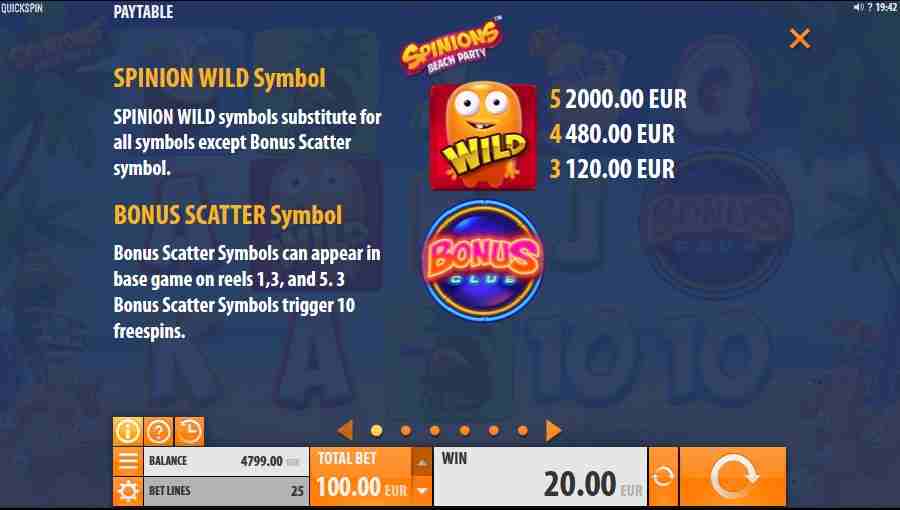 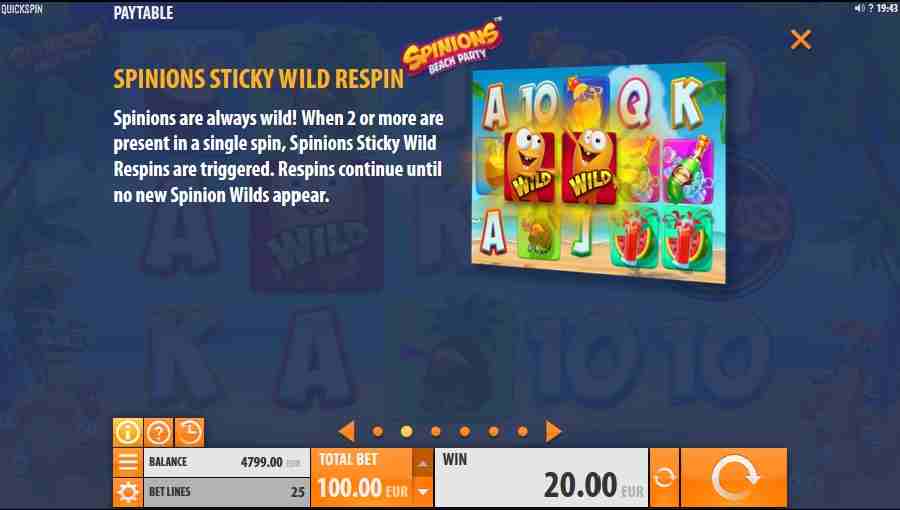 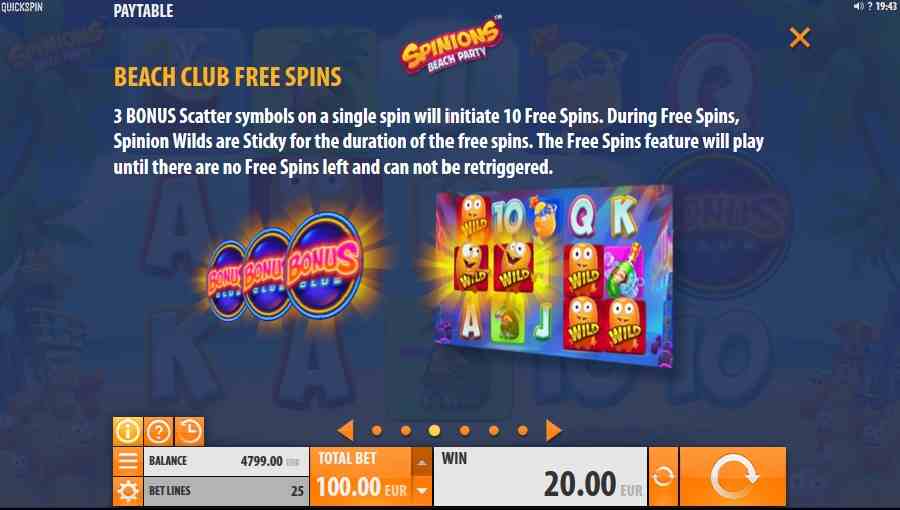 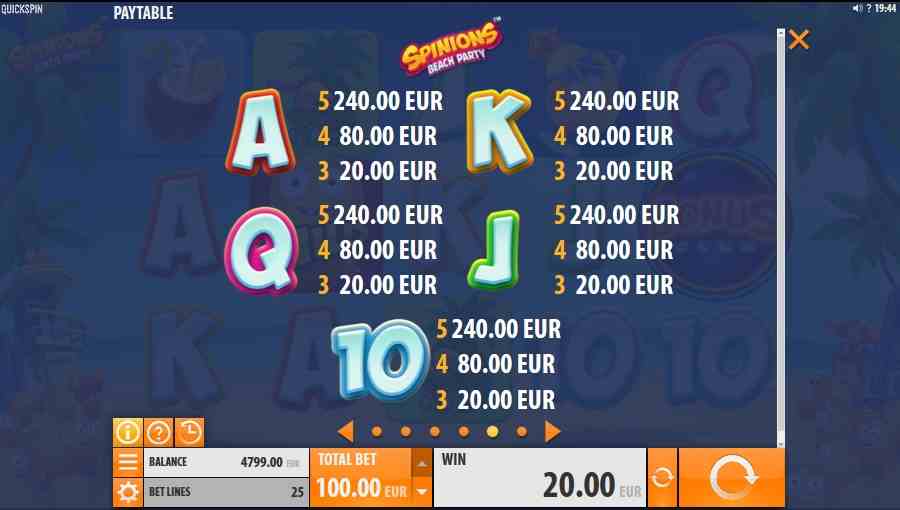 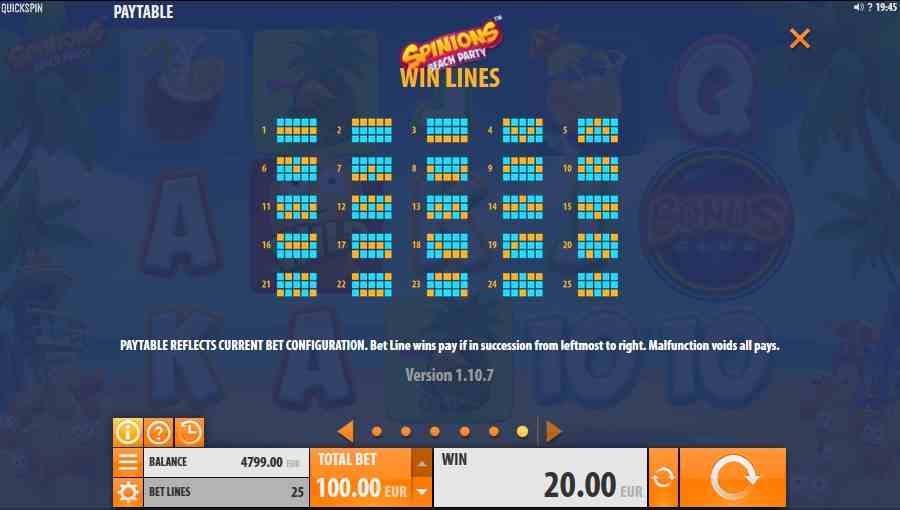 Spinions Beach Party is a non-progressive 5 reel, 3 row, 25 paylines video slot game from Quickspin, it has a Adventure theme, The game features Spinions Sticky Wild Respin feature and Beach Club Free Spins!, and has a maximum jackpot win of $2500