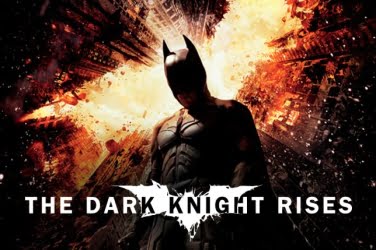 The Dark Knight Rises is a slot game based on the movie of the same name, which is the third movie of the Batman franchise. In this movie, Batman saves Gotham from Bane, a dangerous villain, who is trying to seize control of the city. The game follows the story of the movie and invites the player to tag along with Batman as he fights evil and saves the city.

The dark theme is perfect for this game, as it goes with both the name and the atmosphere of the movie. The awesome soundtrack and no holds barred graphics combined with the use of footage from the movie provides the player with an immersive gaming experience. Symbols such as Commissioner Gordon, the policeman Robin, Cat Woman, Bane, and Batman himself feature in this video slot game. Along with this, the game also uses the J, Q, and K card symbols.

The Wild symbol is truly one of the most exciting features of the Dark Knight Rises slot game. In the base game, the player has an option to choose a symbol as a Wild. Apart from that, the Wild feature in this game works in no less than four different ways: Heat Seeking Wilds, Super Stacked Wilds, Extra Wilds, and Split Wilds. When Wild symbols land on reels two, three, and four, the Heat Seeking Wild becomes active. Expanding Wilds can fill the whole reel, greatly improving the chances of a win. The Split Wilds feature can split one Wild symbol into two. This can result in netting a six of a kind, which awards a payout that is double that of the five of a kind.

The Dark Knight Rises logo is the Scatter symbol. Landing three or more of these symbols anywhere on the reels triggers the option to choose from the Bane Free Spins round or the Batman Free Spins round.

The Free Spins are triggered anytime a player lands three or more Scatter symbols on the reels. The player then has an option to play as either Bane or Batman. Each of these options comes with its own unique features. Choosing the Bane Free Spins round could get you a stacked Wild feature or the Rolling Reels feature along with 22 free spins and a double multiplier. Those choosing the Batman free spins round can enjoy a 4x multiplier along with Heat Seeking Wilds and also, the option to choose an extra wild symbol for the duration of the round. Free spins can also be awarded during the Random Prize Generator, which can be triggered during any of the losing spins.

The Dark Knight Rises Slots has two awesome random features. The Symbol Scramble randomly scrambles the symbols on your screen to create the most profitable winning combination. The Random Prize Generator is triggered during any of the losing spins. It features an animation of Batman fighting Bane and awards free spins as well as multipliers.

There is no Special Bonus round in this game. However, there are loads of interesting features and options to keep the game play engaging and exciting

( Now available on mobile version ) This is a 243 ways to win game from Microgaming. It is perfect for the mid and high rollers. Even though this is a non-progressive slot, there are enough features and rewards to make this an incredibly exciting game.

It looks like Microgaming has pulled out all stops to create an exciting and immersive game to match the amazing success of the movie that it is based on. For slot game fans and for Batman fans, this is certainly a game you do not want to miss! 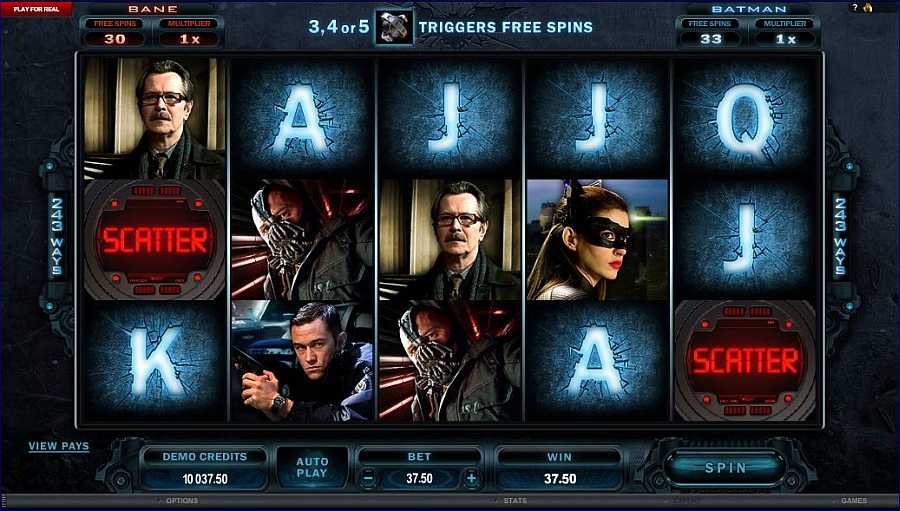 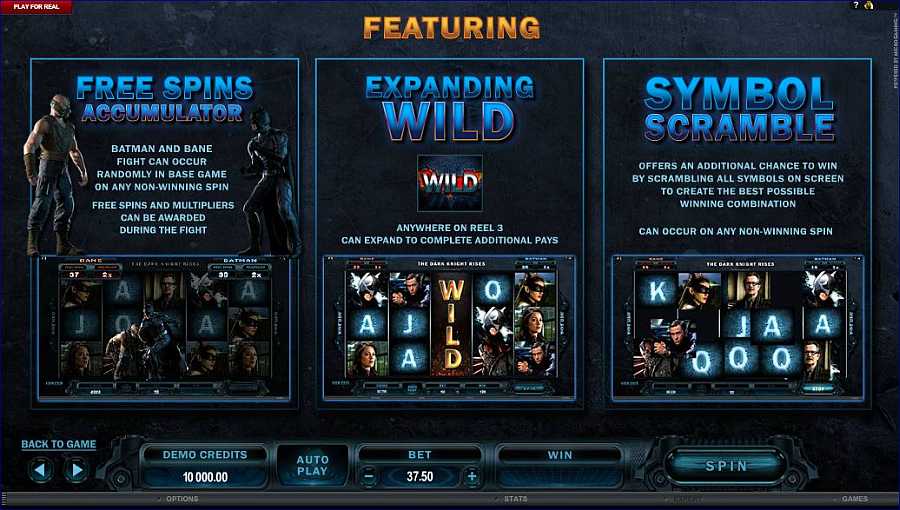 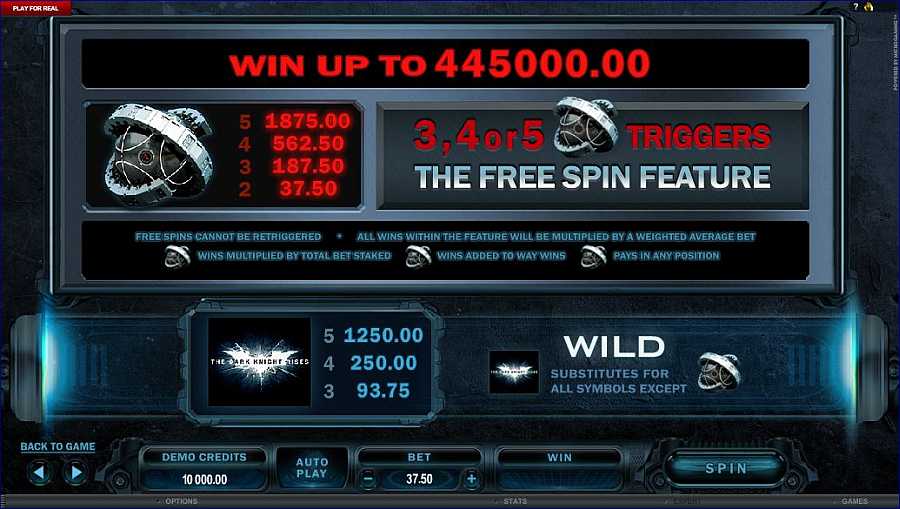 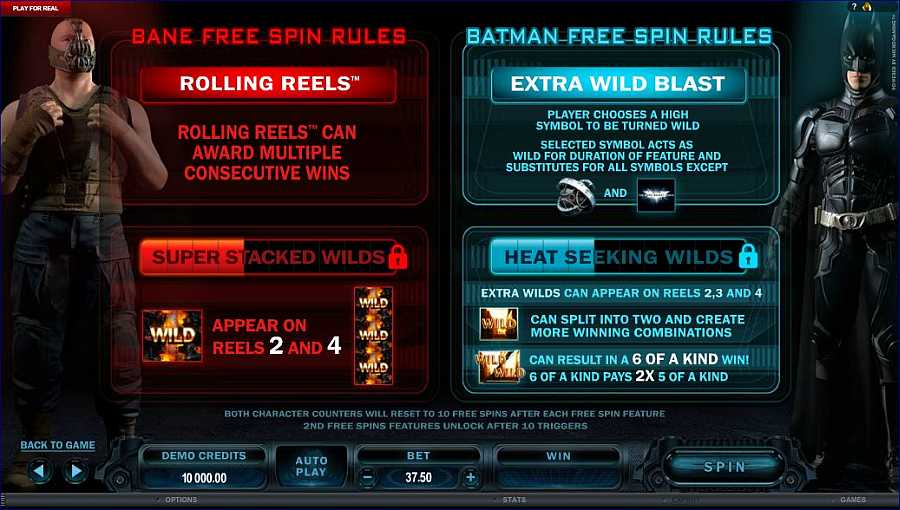 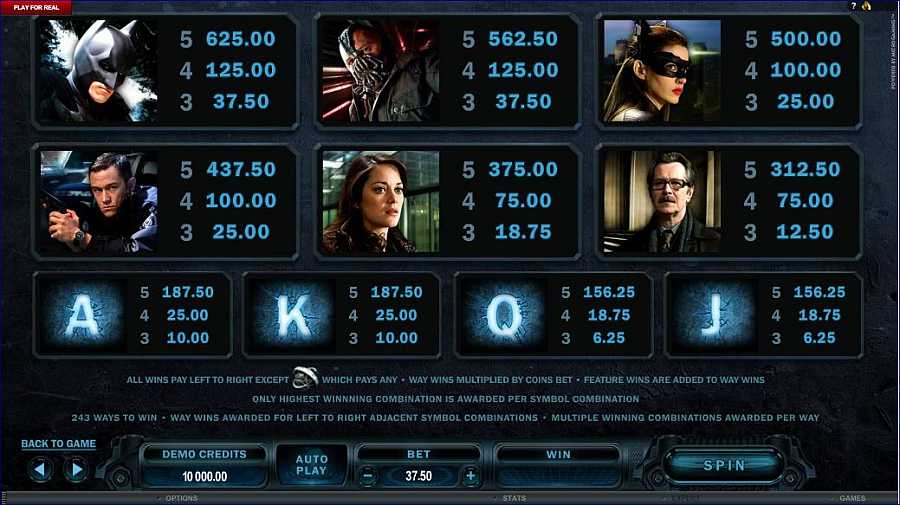 The Dark Knight Rises is a non-progressive 5 reel 243 ways pay-line video slot machine game from microgaming, it has a Batman theme, and comes with a wild symbol, scatter symbol, multiplier, free spins and has a maximum jackpot win of $250

We use cookies to ensure that we give you the best experience on our website. If you continue to use this site we will assume that you are happy with it.OkRead more