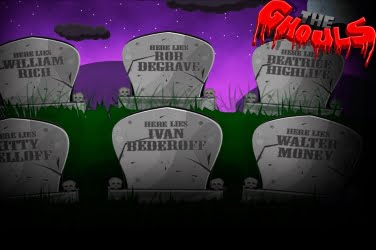 This Betsoft creation has a seasonal Halloween theme, although it can be enjoyed by players at any time of the year. It is an online slots game which has 5 reels and 20 winning paylines that provides plenty of opportunities to increase the final pay out amount to can be awarded.

The 5 reels of the game are set within the porch of an abandoned House, an image which is also used as one of the Bonus Symbols. In the background players can view a dark night sky, with a watchful owl overseeing proceedings. There is a full moon to the top left of the screen, while several skulls are used in the games design.

Though many would expect a creepy feel to The Ghouls slots game, it actually has more of a fun atmosphere. The graphics are of a high quality and there is appropriate music played throughout.

The elements of the Control Panel are shown as signs which are enclosed within skull and bone frames. With the Progressive Jackpot amount at the top of the screen, players can clearly follow their potential pay out figure throughout this online slots game.

Although this online slots game from Betsoft doesn’t have an Auto Play Feature, it is available in a Mobile version. This means that players can enjoy the game even when away from home.

Play the Ghouls on your Windows, Linux computer or Mac. No download required to play this web-based slot game

Halloween themed symbols can be found on the reels of the game. They include a Mummy, Frankenstein’s Monster, a Spider, a large Green Eye, and a Wolf howling at the moon including others.

There is a Pumpkin Wild symbol to be found across the games reels. When it appears it is able to change other symbols, unless that icon is able to activate a Bonus Feature. And although there is no Multiplier awarded at this point the Pumpkin Wild can still provide players with more chances to create a winning payline.

A Vampire acts as a Scatter symbol and activates a Free Spin Bonus Round should 3 or more be spun. 3 symbols will allow 5x Free Spins, while 4 or 5 awards 10x or 20x respectively. Once this round has been completed players will then be returned to the main game with the possibility of the symbols appearing again.

The Gravestone symbol is an additional Scatter included in this online slots game. If 3 or more of these are found then a second screen will appear. Here 6x Gravestones are shown which players can select to receive a random cash prize until the “Collect” icon appears. Players will find that the more Gravestone symbols that have been revealed will result in a higher reward.

It is the abandoned House which provides the highest jackpot in the base game of The Ghoul slots. If all 5 reels are filled with this symbol then the player will receive the Progressive Jackpot the balance of which is at top of the screen. This can provide a lucrative return on any wager that has been placed.

Coin sizes range from $0.02 to $0.50 in this online slots game from Betsoft. Players can place anything from 1 to a maximum of 5 coins on any of the 20 winning paylines. This means that players of all levels can enjoy the flexibility that the designers have incorporated and are able to wager as much or as little as they please.

To provide more opportunities for players to add to their winnings Betsoft have included a Pumpkin Wild, a Vampire Scatter, Free Spins and a “Pick Em” Bonus Mini-Game. These are all easily activated during the game and allow further enjoyment for players as they watch their pay out balance increase.

All winning paylines are made from the left to the right of the screen and as the 5 reels spin players can enjoy this Halloween themed game from Betsoft. Its 3D animated graphics adding to the creepy yet fun atmosphere that the designers have created.

Some players may be disappointed to find that there is no Auto Play feature available. Yet once the game has begun all the elements it provides ensure in keeping players entertained.

Players can find the Haunted House across the games 5 reels, with various Halloween characters inside. But there is no need to fear as with various Bonus Features there is plenty on offer in The Ghoul slots game. 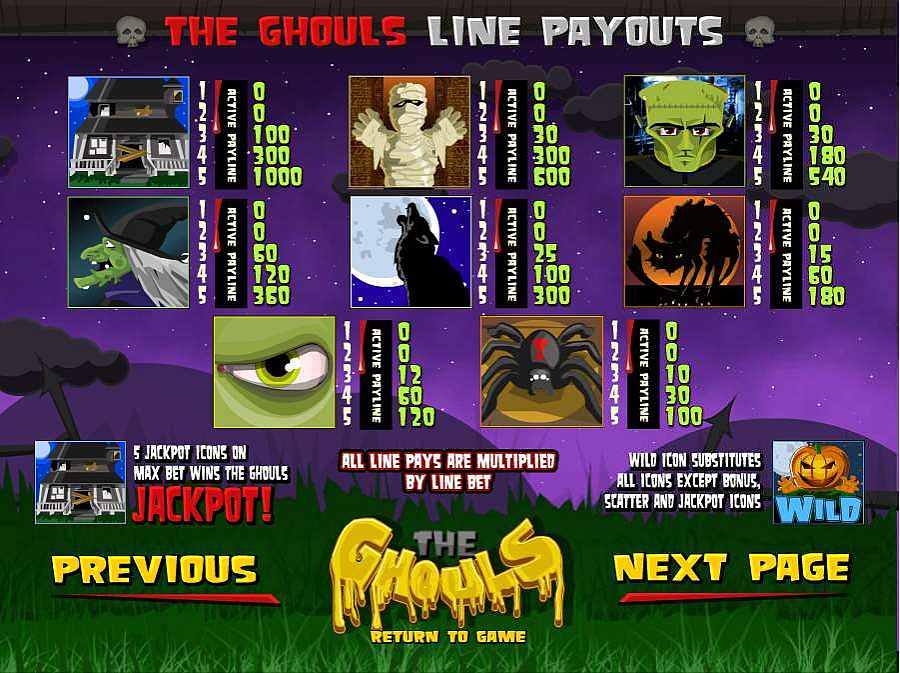 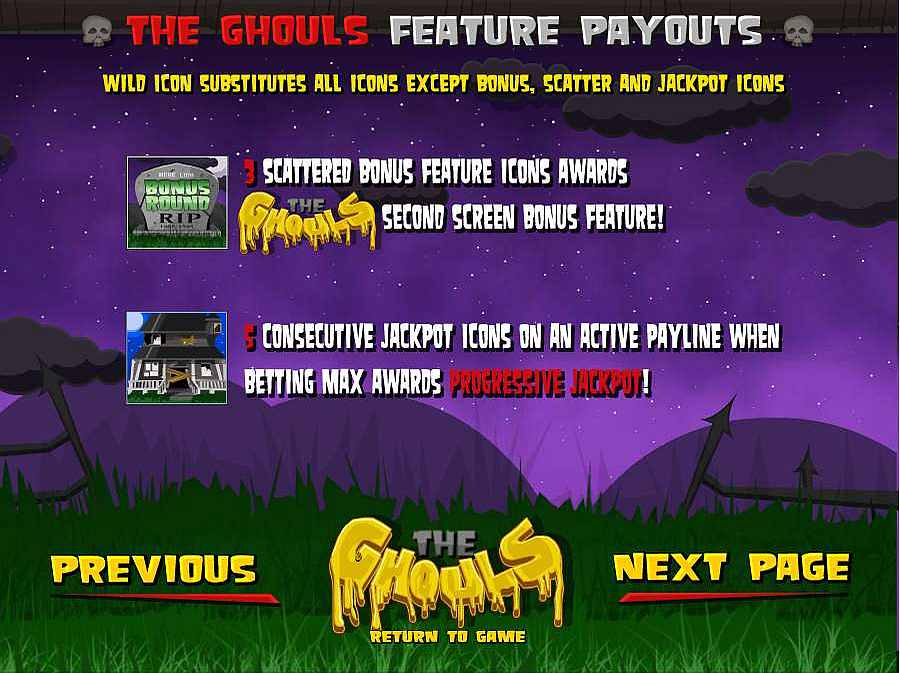 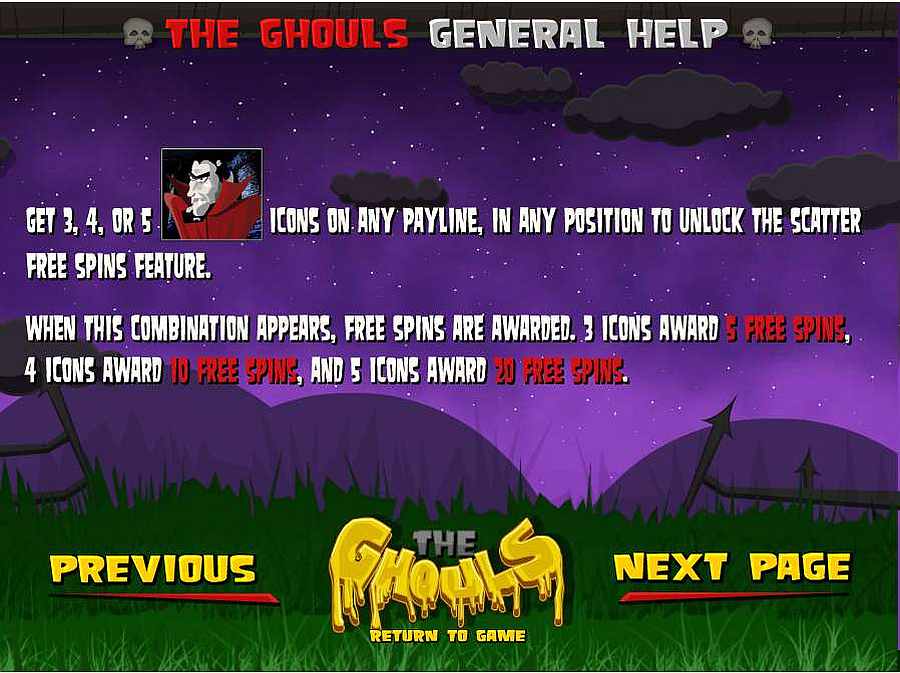 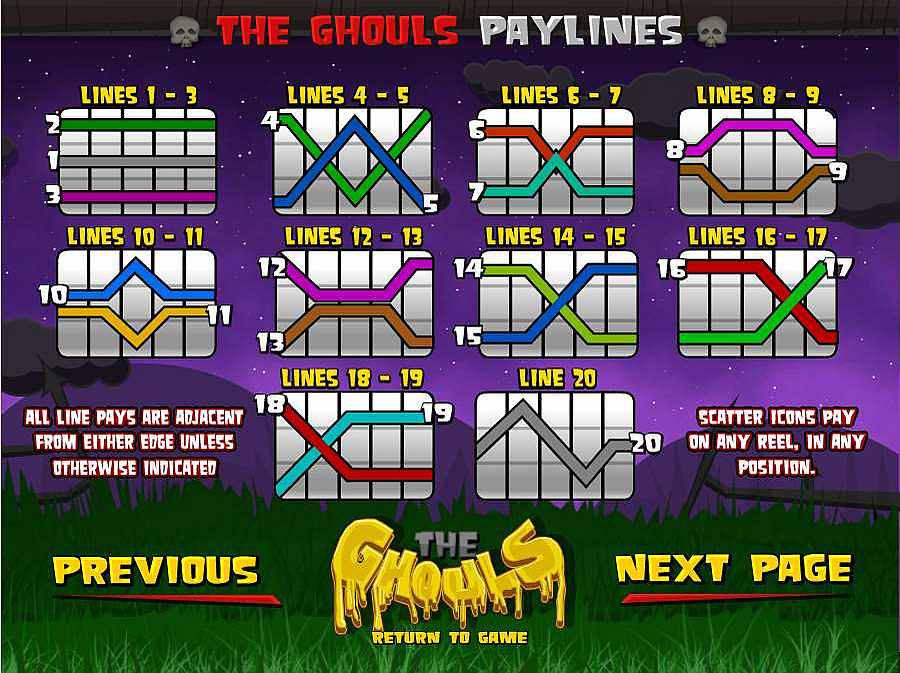 The Ghouls is a progressive 5 reel 20 pay-line 3D video slot machine game from betSoft, it has a Halloween theme, and comes with a wild symbol, scatter symbol, free spins and has a maximum jackpot win of $5000