The Heat Is On Slots Review 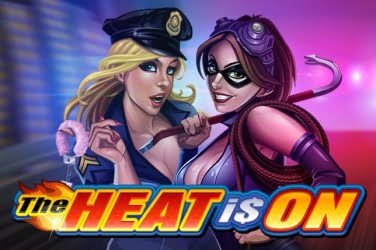 It’s naughty vs nice in this action-packed adventure, where being bad has never looked so good! Jean is the blonde Special Task Force Officer who is determined to catch the infamous dark haired Cat Burglar Selina. This is the theme for a Microgaming release that has the buxom beautiful characters try to stay two steps ahead of each other as they chase through the City streets.

In the forefront of this scene players can find various large symbols hidden among the games 5 reels. It offers 45 winning combinations so there are numerous chances for the jackpot balance to be added too. And with 2 Wilds and up to 160 Free Spins on offer this is an action packed slots game with plenty to keep players entertained.

Although there is a rather old-fashioned style to the graphics that have been used in this slots the colors are still bold and vibrant upon the screen. It is an online slots that can be accessed whether on a Desktop, Tablet, or any Mobile device and The Heat is On slots game is already proving appealing to players from around the globe.

The Heat is On Slot Features

Given a large chunky appearance there are 10 through to Ace symbols to be found upon the reels of the game. Despite the fact that they can only provide a low cash prize when included in a winning combination they do appear often so players can benefit from regular pay outs.

The rest of the symbols are in keeping with the Police theme of the game and include a Bomb, a Motorcycle, a Police Car and a Helicopter.

However it is the Suitcase of Gold Bars that will reward players with the highest jackpot in the base game in this online slots. If players are lucky enough to fill all 5 reels with this symbol they will see 45x their initial wager being added to their final balance.

Wild – both Jean and Selina act as Wild symbols in this slots game and their smiling faces can be found set within a frame shaped like a Police Badge. They can both change all Bonus symbols but not each other or the Scatter. However this Feature has 2 other surprise elements to provide an extra thrill with a unique twist.

Should all 5 reels become filled with either the Jean or Selina Wild symbols then players will receive 200x their stake, or alternatively 100x if it is a combination of the 2 characters. This addition to the games format is something that players of any level can enjoy if the symbols land in their favor.

Scatter – this symbol is the image of the City Bank and is consider to be the main focus of the game due to the Bonus Features that will be activated when they appear on the reels. In addition to this if 5 Bank Scatters are found the player will receive 30x their initial wager.

Free Spins – the Bank Scatter needs to land on the 1st reel and for at least two further matching symbols to appear adjacently for this Bonus Round to come into play. How many Free Spins which will be rewarded is dependent on how many were on the screen during that point of the game but is either 5x, 10x, or 20x respectively.

Again Microgaming have included an added entertaining element to the game by given further chances for players to be able to take advantage of even more Free Spins. When the Bonus Feature was activated if there were 2 Scatter symbols on either the 2nd or 3rd reel the amount of Free Spins is doubled to 40x. But if they were on both reels this is quadrupled so up to 80x Free Spins can be claimed.

The thrills don’t stop there though because there is also the opportunity to re trigger this Round which raises that to 160x Free chances for players to increase their winning amount in The Heat is On slots game.

The Heat is On Game Play

There is a wide range of betting options in this online slots game with the lowest wager set at 0.50 and the highest being just 100.00, players of varied budgets can enjoy this fast paced game.

This is considered to be a Medium variance game so some players may need to keep any eye on their bankroll. However it does provide a RTP of 96.45% so they can be assured of being able to maximize on whatever amount they initially wagered.

Microgaming have not only created an action packed game with an upbeat backing track and realistic sound effects they have also provided various Bonus Features to appeal to players who want to hunt for their treasures across the 5 reels of The Heat is On slots.

– Try The Heat is On here with a free spin or visit microgaming Casinos to play for real money. 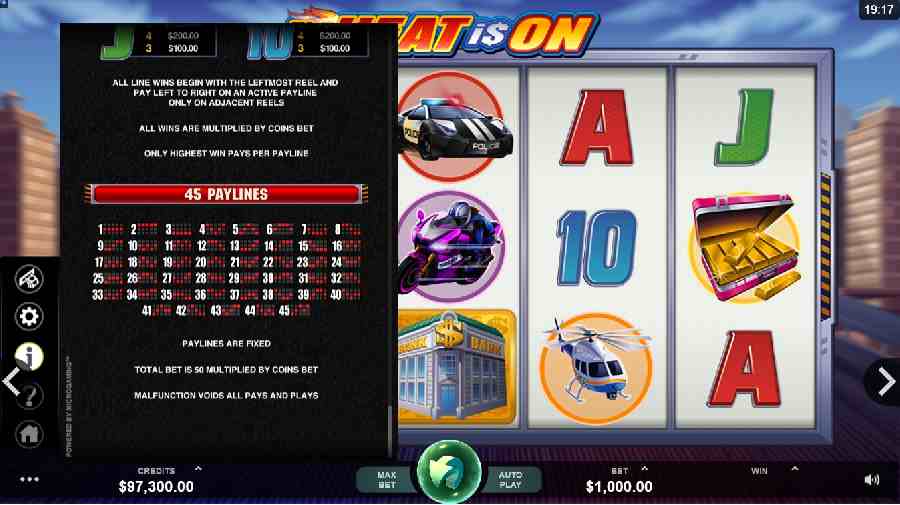 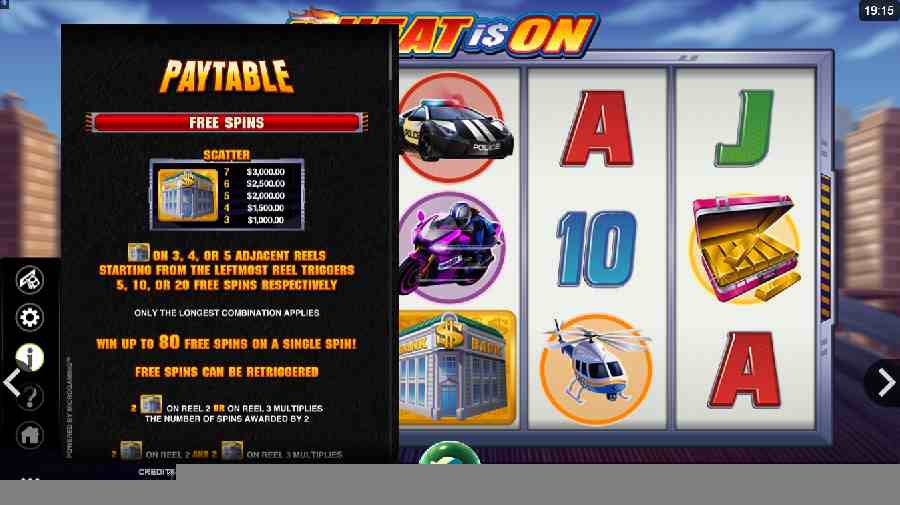 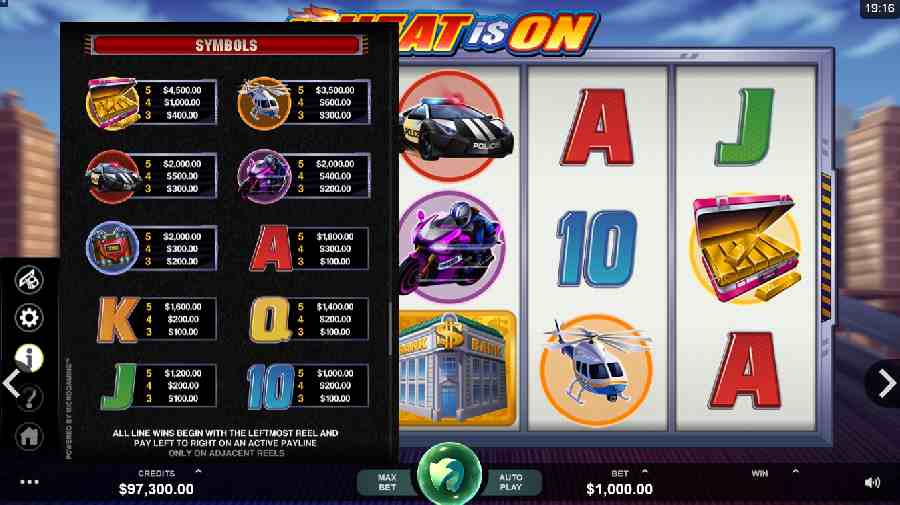 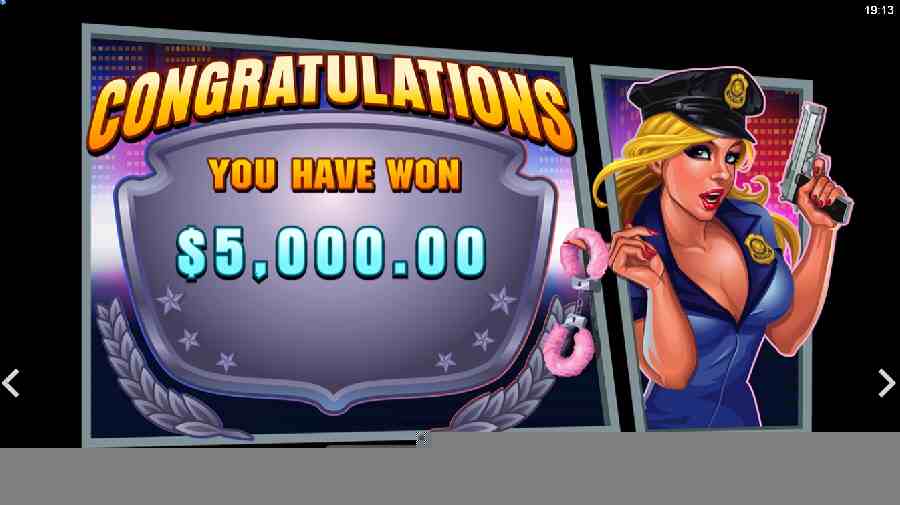 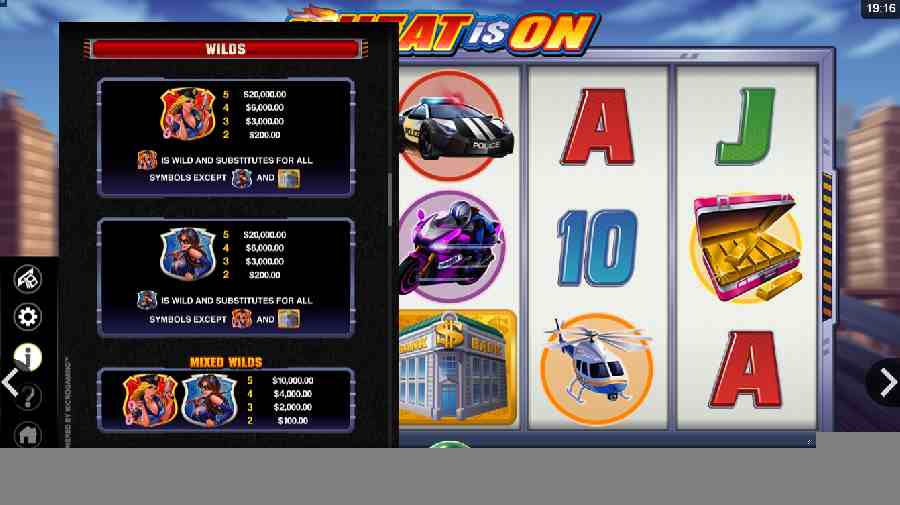 The Heat Is On Slots review

The Heat is On is a 5 reel, 45 ways pay line, video slot game from Microgaming. it has a Police theme and the game features Scatters and Wild pays, as well as Mixed Wild pays when both leading ladies land on the reels. with a maximum jackpot win of $/€20,000