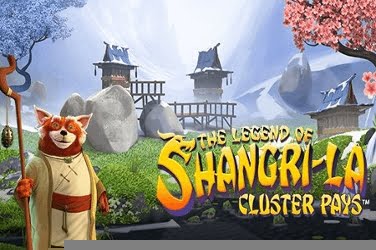 James Hilton wrote of a mystical kingdom in the Himalayas back in 1933 and this is what the game is loosely based upon. So here players can travel to the Far East to find the games main Red Panda Guru at the left of the screen. The serene background scene shows images of mountains, blossom trees, and waterfalls all complimented by the relaxing music that adds to the soothing atmosphere.

Delicate shades have been used in the games design and all the characters are highly detailed with quality graphics. However, there is a different twist to this game as players will find 6 reels with 5 rows sandwiched between two ornate pillars.

The full length of the game is actually The Legends of Shangri La: Cluster Pays as rather than locating matching symbols in a row here they must fall in adjoining positions of 9 to generate a pay-out for the player to claim.

It is a fun game with plenty of action-packed features to keep players entertained while they allow the reels to spin whether accessing via a Desktop or Tablet. A Mobile version is also available for those who want to take their chances while they are out and about.

Low paying symbols include a Peach Flower, a Purple Dragonfly, a Goldfish, and a Green Butterfly. They are joined during the game by 3 Gurus who are depicted as a Green Monkey, a Blue Elephant, and a Red Tiger who will all appear 2 positions high to create higher winnings.

Wild – with a gold background and set within a circular frame a Green Question Mark symbol is used here. It can land anywhere on the reels and will change other Basic Symbols if there is the chance of a higher paying combination to be found.

Scatter – an Oriental scene with the words “Free Spins” is the Scatter symbol in this online slots game. These also fill 2 positions on the reels and just 3 need to be on the screen for a Bonus Feature to come into play.

Free Spins – 3, 4, 5 or 6 Scatter symbols will activate this part of the game and rewards players with 5, 6, 7, or 8 Free Spins respectively. However, in a unique twist after each spin between 2 and 6 Wilds are added to the reels. The 1st 2 of these will land randomly but any more nestle beside a Cluster to provide further opportunities for players to add to their bet.

An extra Free Spin is also given to players if the total prize from this Bonus Round is less than 10x the original stake to offer another chance to increase the final balance to be claimed.

Random Wilds – if there are 2 Clusters of 4 or more matching symbols then players will see Wild symbols appear at Random until they join to generate a win.

Sticky Re-Spins – there need to be 2 Clusters of between 5 and 8 symbols for this Feature to be activated. Now players can benefit from 1x Re-Spin while those positions are frozen in place and if another matching symbol lands the Round will continue until a winning combination is created.

Nudge Reel – during the game there may be a time when the player will see 2x Scatter symbols while a 3rd is hidden slightly from view. Yet with this Feature, there is the chance to Nudge the Reel to reveal it so that the Free Spins Bonus Round can begin.

The Legends of Shangri La gameplay

Although AutoPlay is available in this online slot game there are few players choosing this option. Instead preferring to be more interactive with the Net Entertainment software while they embark on a journey to find the treasures that the Guru will guide them too. Only able to unearth them if 9 matching symbols are found in a Cluster across the 6 reels of the game.

The wagers have a wide variance so this is a game that will appeal to players with any budget. A small bet of just 0.10 can be placed to allow the player to hit the Spin button while those with more in their back pocket can go as high as 200.00.

This is an intriguing slots game that has been keeping players enthralled since its release in September 2017. There are various Bonus Features and fun elements for players of any level to enjoy while they spin the reels of The Legends of Shangri La slots game.

The Legends of Shangri La: Cluster Pays is a 6 reel 5 row 3D video slot machine with Cluster Pays mechanic from NetEnt Gaming, it has an Asian theme, and features Sticky Re-Spins, Random Substitutions, Nudge Reel, and Free Spins. with has a maximum jackpot win of 1000x your stake.