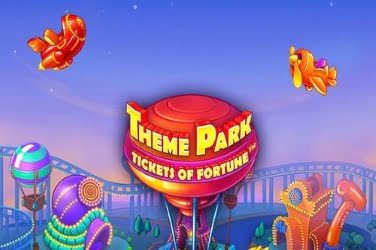 The full title of this game is a Theme Park: Tickets of Fortune slots which sets the scene for players to enjoy. They can find themselves at the fair ground with a roller coaster seen in the distance. Sunlit clouds scatter the deep blue sky which is at the top of the screen while the games Control Panel is found at the bottom.

All the colors that have been used in the games design are bright and vivid and there are some appropriate tunes which play in the background throughout. There is a fun atmosphere to the game and players can recall their own visits to local theme parks with the various Bonus Features that are on offer.

Net Entertainment have released this online casino game with all players in mind. Not only can it be accessed on Desktop but also Tablet and Mobile devices. This means that players can enjoy all the various chances that there are to increase on their initial wager no matter where they may be.

Balloons have been used to create the 10 through to Ace symbols which can be found upon the games 5 reels. They are brightly colored and add to the fun element of the game although they provide the lowest pay outs when included in a winning combination.

In addition there is a Space Ship, an Airplane, a Bumper Car, a Swan and a Horse symbol which will remind players of the various rides that are found in Theme Parks around the world.

A Roller coaster Car is the Wild symbol in the Tickets of Fortune slots game. It can be found on the 2nd, 3rd and 4th reels and will appear stacked when they come into play. When a player locates this symbol they will see others besides the Bonus icons change so that a winning payline can be created.

There is a Claw Feature symbol which can only be found on the 5th reel of the game. However when this becomes activated players will see the claw grasp at toys that can be seen at the bottom of the screen. If a toy is won then players can benefit from a Multiplier which could be up to 15x their stake.

Hidden on the 3rd, 4th and 5th reels players may be lucky enough to discover the Theme Park Ticket Game symbol. Should all 3 of the reels be filled then they will be able to spin the Wheel of Fortune. This then rewards the player with a selection of tickets, the amount won determining the next level of the game which includes:

Punch Bag – players can hit the punch bag to receive up to 25x their wager.

Can Tower – each time a can is hit the player will be awarded with a 2x Multiplier. However if they knock down all 18 this is increased to an amazing 864x.

Sledge Hammer – the harder the hammer is hit the higher the prize which can be up to 100x the player’s initial stake.

Ske Ball – here players have to aim 5 balls into the various holes that are shown on screen. All the Multipliers earned are then accumulated and added to any winnings at the end of the round.

Fishing – now players can choose 5x fish symbols, each of which will reward the player with up to 50x their bet or the chance to pick more to provide further chances to win.

Duck Shoot – shoot 5x ducks and players can receive up to 50x their wager with an added Multiplier.

Only shown on the 5th reel of the game players may be lucky enough to find the Theme Park Bonus Wheel symbol. When this appears players can spin the wheel to then be taken to the Theme Park Tickets Game.

Net Entertainment have included 50 winning paylines for players to wager upon before they set the 5 reels to spin. This can range anywhere from 0.25 to 250.00 which makes this a popular slots game with both high and low rollers alike.

There are numerous Bonus Features to be found throughout the game including a Wild symbol, along with various Mini Games that all add to the thrill of play. Although there are no Free Spins, a Progressive Jackpot or a Gamble Feature there are still plenty of opportunities for players to add to their initial wager.

However if a player needs to be away from the screen it is possible for them to set the reels to spin automatically by using the Auto Play Feature.

The Tickets of Fortune slots game is action packed and offers a RTP of 96.52% which is more than enough to entice numerous players from around the globe to Net Entertainment casinos. 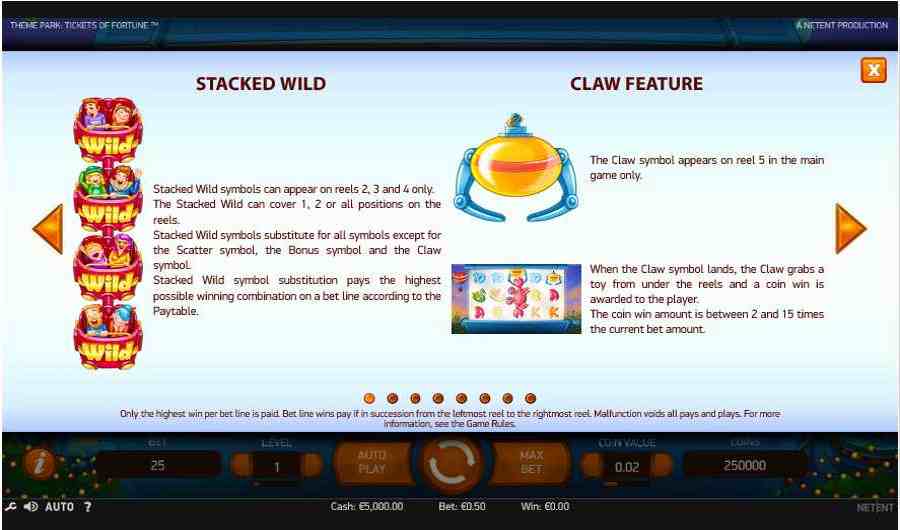 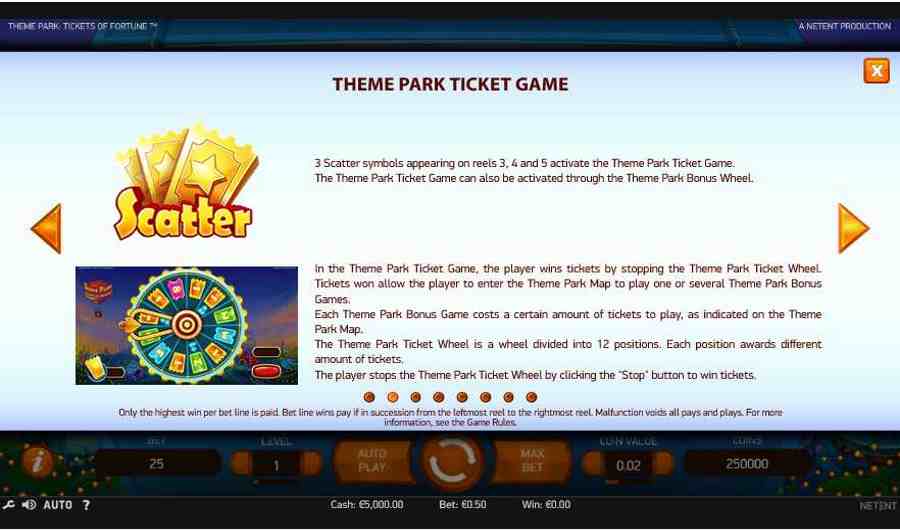 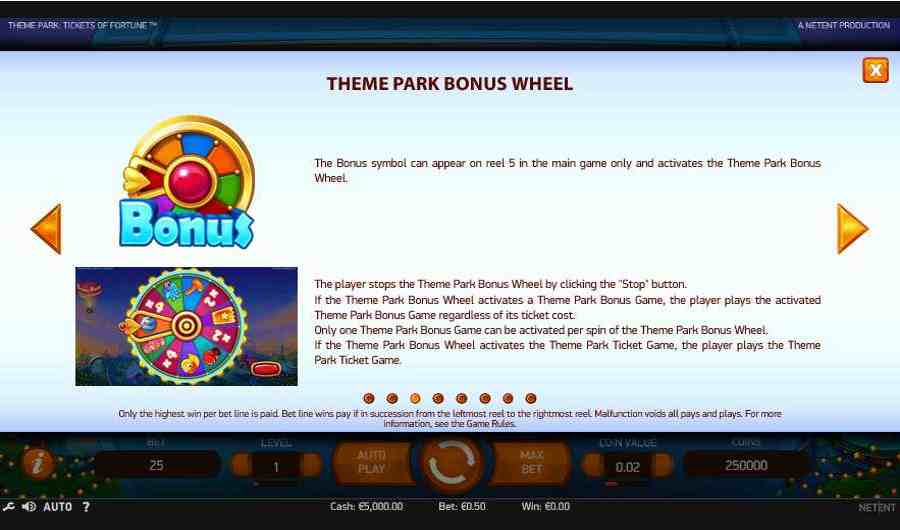 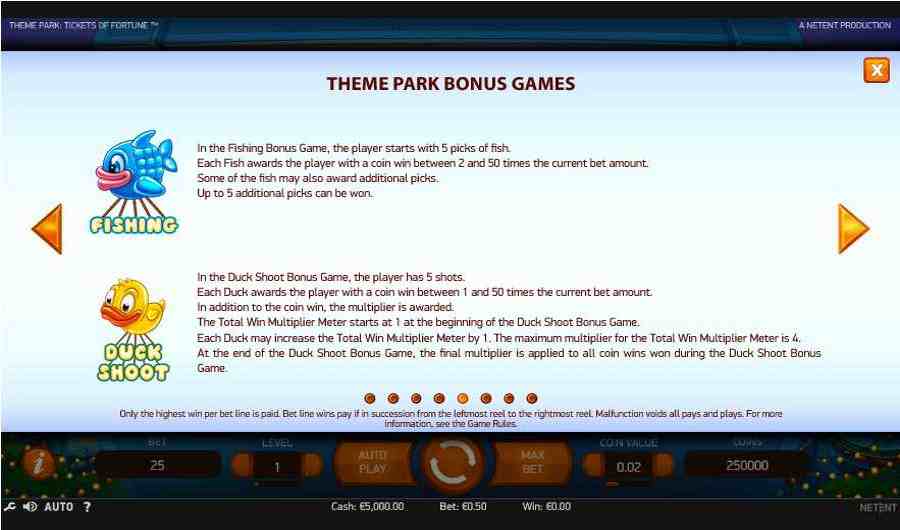 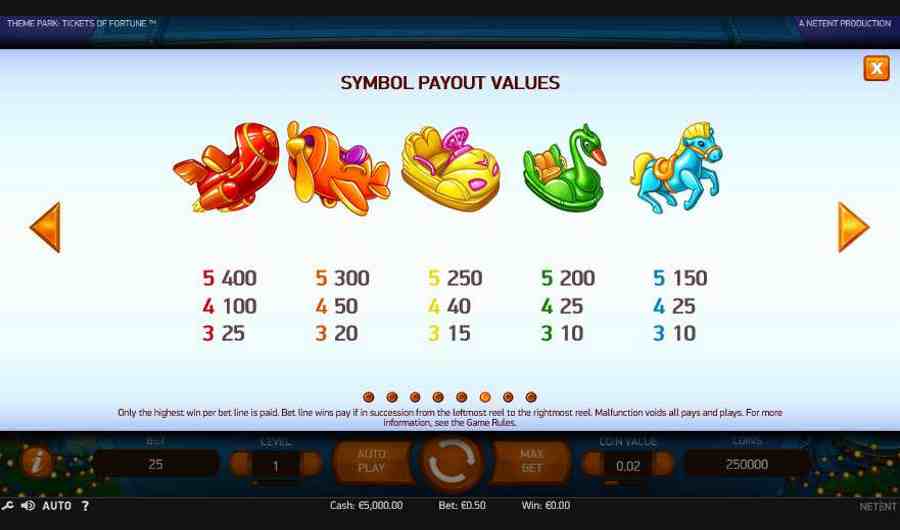 Tickets of Fortune is a non-progressive 5 reel 20 paylines video slot machine game from net entertainment, it has a theme park theme, and comes with a Scatter, wild symbol, and has a maximum jackpot win of $4,000