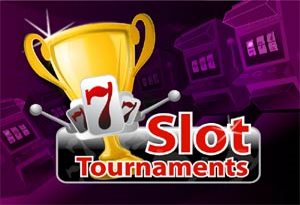 The slots industry is one of the fastest-growing in the global gambling market. Billions of dollars are spent each year as software companies fall over backward in a bid to create games that are bigger, better, and more entertaining than their competitors. As a result, online slot fans are never short of gaming options and have endless choices available. From traditional three-reel slots to graphically superior video slot games with extra bonus features, there is usually something for every type of slot player available.

In recent years, one of the most exciting forms of entertainment available for slots fans has been that of casino slots tournaments. These types of tournaments have been played for years at land-based casinos, whereby players sign up for a tournament, get a certain amount of credits, play for a specified amount of time and the winner is the player who has the most credits left at the end of that time.

Some slots tournaments are free to enter, so just open an account and check for tournaments slots scheduled to play.

Slot tournaments are renowned not only because of the fun and thrill of playing the game but also because they are easy to play and do not require special skills. A leveled playing field is compelling enough to draw in players like you to compete in a tournament where they can win it all. But before you jump in and play your first game, let’s take a look at slot tournaments and how they work.

Why You Should Play Online Slot Tournaments

Return on Your Entry Fee: Since the goal of slot tournaments is to provide more than just fun to each avid player, they make sure you get the best casino experience by offering a return on your entry fees. There are some online casinos offering free tournaments with huge prizes to attract players to play and have fun with the other contestants. With all the fun and excitement within the online gaming community and the game itself, even those who do not win yet enjoy the game eventually become regular players.

The Exciting Competition: Aside from the cash prizes, slot tournaments offer an online platform where you can build a special bond with other slots players from across the globe. Tournaments are great ways to meet other players from different parts of the world, share helpful tips, build friendships, and compete against each other in an exciting game for the pooled money. Unlike regular slot games, competing with human opponents is much better because of the never-ending fun and excitement.

Pooled Money: “Sit and Go” and “Scheduled” are the two types of slot tournaments you can sign up for. Both types offer big cash prizes to the winner and nothing for the losers. Unlike regular solo slots, a player has a chance to win bigger prizes from pooled entrants.

Understanding the Types of Slot Tournaments

Scheduled Tournaments: Unlike Sit and Go tournaments, you don’t have to wait for all the players to register. Once signed up, you can immediately begin your battles with other contestants. However, there’s a deadline for entering which makes you feel pressured and thrilled to keep your name on top of the leaderboard.

The best thing about slot tournaments aside from the fun and thrill of battling against human players is the free slot tournaments. They provide players from different parts of the world with free tournaments where they have a chance to win great prizes without spending on entry fees.

Schedule Tournaments: players are required to sign up before they can compete with multiple players. Since the tournament doesn’t have a limit on the number of players, you can expect to battle it out with hundreds of slots players. Game time is predetermined in scheduled tournaments and winning the grand prize is more difficult because of the number of players.

Sit and Go Tournaments:, Unlike scheduled tournaments, you need to wait for all the other players to register because of limited participants. The good thing about it is that you have a better chance of winning the money. However, the grand prize is smaller in this one because of the limited number of players.

Where to Find and Play Slot Tournaments

Is Online Slot Tournament for You?