Bingo For Money is an online casino including mobile and live dealer games, established in 2005 using games powered by multiple software providers. It is operated by Digital Entertainment and is licensed under the jurisdiction of Curacao.

Bingo For Money’s mascot seems to be an elderly woman who also still has a lot of attitudes. They seem to be trying to give the normal Bingo audience a fun new twist. It lists the jackpots prominently on the website, so users can tell that those are a serious focal point. It displays the overall number of users on the bottom of the page. As of this writing, that number is nearly 3 million players. The site also lists the “Bingo Overall Winnings” to highlight how much their players could win just by playing their Bingo games. A “Game Overall Winnings” ranking is available as well for the other types of games offered at this online casino.

Of course, their 24-hour Bingo rooms are the main attraction at this online casino. The site is owned by the Bingo For Money Group, and the site’s first language is offered in English. It appears that there are no restrictions on who can join this online community and play the games, but individual countries may have rules that state otherwise. They offer just a few banking options, including echecks, bank wire, money transfer, and credit or debit cards. They also let users utilize an e-wallet called Easy Debit.

In addition to these random daily bonuses, they also offer specialized Bingo Rooms at specific dates and times so players can win additional prizes. For example, there is a Million Dollar Party every Saturday from 9 pm to 3 am where they increase the cash prizes available. Vacations and electronics are also available prizes at Bingo For Money. Tournaments and jackpots are commonplace as well. Also, there are raffles and random cash prizes.

Bingo for Money also offers a regular $25 no deposit bonus or an exclusive $50 no deposit bonus so players can start playing just by creating an account. This way, players can get in and try the games before they make a commitment to the online casino by making a deposit. They also have progressive welcome bonuses for new players to encourage them to make a series of deposits. Although the match bonuses do change fairly often, they are generally pretty high.

Bingo For Money uses Parlay Entertainment Software, which specializes in Bingo games, but they also offer some other casino games as well. Parlay Software has won awards for its work producing and maintaining its Bingo games. Bingo For Money is offered in Flash, which means that all of their games are instant play and there is no download required. This allows players to move through the Bingo game rooms and other casino games much faster and smoother. It also means that players on virtually any operating system can play, even Mac operating system users, who sometimes have issues with online casinos that must be downloaded to be played.

Bingo For Money states on their site that they store players’ data using state of the art encryption and technology. They specifically state that their users’ information is 100% safe at all times. They use the industry-standard encryption methods, which is also the same type of security that most banks implement. They are licensed in Curacao and may be licensed in Costa Rica as well. The site does not indicate how their games are tested for fairness and randomness, but presumably, Parlay software is testing periodically to meet these safety needs.

Bingo For Money offers roughly 300 variations of Bingo games, with several Bingo rooms available. Players can use the Bingo rooms to not only win cash but to also interact with one another through their chat features. Bingo For Money emphasizes the importance of being able to play with other people to enhance the online gaming experience. There are at least six Bingo rooms available, and each one has a different theme and pays scale. Their highest room is called “Fair and Square,” and it costs $2.50 to play. There are also Dollar, Quarter, and Nickel rooms. Other rooms include Desperate Housewives ($0.20) and Crazy ($0.10). Each room also has its jackpot as well.

In addition to their Bingo games, Bingo For Money also offers video poker, pull tabs, Keno, and Video Slots. Each game has its theme, characters, and engaging graphics and content. It does not appear that this online casino offers any traditional casino games like card games or other table games. One unique feature of this online casino is that players can tell how many people are playing a game at any given time. Players are also allowed to rate games, so each game has a specific number of stars underneath its listing.

Bingo For Money offers several options to contact customer support. Their customer service representatives are available 24 hours per day, 7 days per week. Players can send an e-mail, call customer support, or use the live chat feature. There are separate e-mails and phone numbers for VIP players. The United States, Canada, Europe, Italy, Australia, and South Africa all have their designated support phone numbers. There is also a relatively comprehensive Frequently Asked Questions page available, so players may want to check here first before attempting to contact customer service. Their banking page may also address specific questions about payment and withdrawal questions. A comprehensive terms and conditions page is available as well, and players should review this page for site rules, account rules, payment rules, and additional information. 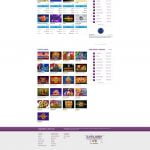