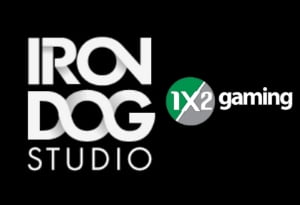 Iron Dog Studio is a passionate gaming developer with its vision on the future. Using top-notch and powerful technology, Iron Dog Studio has innovation as its priority and players’ entertainment as its goal. Working hard to deliver only the best and most advanced games into players hands, Iron Dog is making its way as one of the most reputable gaming creators today.

The studio started as a daughter brand of gaming pioneers 1X2 Network, an independent software company from England, built on the remnants of Football 1X2 Ltd., founded in 2002. With Iron Dog Studio as 1X2’s own brand for developing games and gaming software, 1X2 Network, brings players a vast and exciting collection of games.

Iron Dog Studio games can be accessed in two ways. On one hand, all games developed under the 1X2 brand are available throughout the entirety of 1X2 Network’s gaming suite. On the other hand, since its appearance in 2017, Iron Dog Studio new releases come out under NYX OGS

Iron Dog Studio builds on the success and history of 1X2 Network. But this doesn’t mean the studio isn’t capable of original gaming content in every slot they present.

Iron Dog has already introduced exciting and fun games that have earned the preference of players and game providers alike.

Fully developed in HTML5, Iron Dog Studio’s brings ample choice for “on the go” players. Games can be accessed on Android or Apple devices, and PC.

Retail versions of the games are also available in regulated markets and can also be found in the UK and Italy.

Great bonuses and design are a landmark of Iron Dog Studio. Each game is carefully planned and developed to give players the smooth online experience they deserve.

Iron Dog Studio made its first appearance with 3D European Roulette bringing players into a smooth colorful interface complete with fun animations and a sweet Jazz soundtrack and a soft-voiced croupier.

The French racetrack with multiplayer bets allows players multiple combinations bringing more flavor to seasoned roulette gamblers. With double Zero and with the added feature of La Partage bets gambles can see their chances increase up to a 98.65% in some spins.

With its 50 pay lines, Cosmic Crystal guarantees players an RTP (Return to Player) of 95%.

Iron Dog Studio continues the long-standing history and commitment to players that the 1X2 Network represents.

Iron Dog Studio has earned the prestige of a reliable and secured brand by thoroughly auditing and testing every slot and game it delivers.

The high-quality standards that go into developing each slot produce the most engaging game mechanics. The beautiful and attractive designs are a delight to the eyes and ears of players.

Iron Dog Studio has something for everyone. Players with mobile devices can be assured to get the most enjoyable time exploring and playing a wide selection of slots and table games.

Their added bonuses and unique features are the best incentives for players to start looking for every new release from Iron Dog Studio and for everything that the 1X2 Network has to offer.

All in all, Iron Dog Studio is a strong and well-rounded developer that will leave its mark in the casino world for years to come.