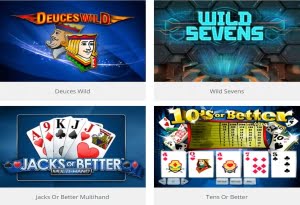 The history of video poker can be traced back in mid seventies when it made its entry in land based casinos. Today, it serves as one of the most popular forms of online gambling. If you’re looking for a game of skill that features large possible gains and an anonymity of playing, then there’s nothing that compares to video poker. Although online video poker is quite similar to the table poker in some ways; video poker offers a much simpler game play. The rules are simple: you’re supposed to play 1 to 5 coins and in return the platform will give you five cards. From the five cards given, you’re supposed to choose which cards to hold and which ones to discard. The platform then replaces your discarded cards and pays you off in accordance to the value at hand.

All casino enthusiasts know that online video poker is the best casino game that offers real money. But what are some of the popular individual games that serious gamblers can use to bet their odds on?

Two Ways Royal: this is a highly engaging video poker game that was developed by Playtech. The main aim of the game is to obtain two royal flush cards. One is considered to be a low royal flush while the other is the high royal flush. The return variation is stated at 99.80%.

All Aces: developed under Microgaming casino software, All Aces is a popular game among many casino enthusiasts. If you collect all four Aces in one hand, you achieve a greater payout rate.

Aces and Eights: this is an RTG video poker that places special emphasis on Aces and Eights. The game offers payouts for special combinations of four kinds of 8s and Aces. It is characterized by five denominations that are identified by five different coin sizes. The highest paying is usually the Royal Flush.

Joker Poker: developed by Betsoft, Joker Poker is played using a 53 card deck. The Joker stands as a wild card in a winning hand but with a low payout. The lowest paying is the Kings while Natural Royal Flush is the highest set at 4,000 coins.

There are many variations of online video poker games. Some of the most common categories include:

Progressive video poker: they are popularly known for offering large jackpots after hitting a royal flush. Each progressive slot takes a small cut of each bet you make and puts it into the jackpot. If you make a royal flush, you receive all the money in the jackpot. Once this is done, the jackpot resets and starts growing again.

Multi Hand: this is a relatively new variation of the traditional video poker game. It features a whole new interesting twist that lets you play multiple hands at once. It starts out exactly like normal games: you’re given five cards; you’re to choose which ones to hold and which to discard. However, once you click the “draw” button, your hand will split into multiple hands. The “draw” will then be run independently for each hand.

Power Poker: If you’ve been at a land based casino, you’ve probably sat with them at one table: players who seem to raise every hand. They push and raise when everyone else is taking a limp in. They’re are called the Power Poker players. This style of play has now been adopted on online platforms. If you want to give yourself a 50/50 chance in video poker, then your category falls under power poker games. The good thing about Power Poker games is that they are available for both Android and IOS devices. Some of the game features include:

It has after a very long time that we’re seeing the introduction of four hands play which is quite different from the multi hand video poker game. wgs software released this new gaming variant with the name Bump-It-Up. The variant operates through Jacks or Better.

The gaming experience is quite different from the Multi hand: each additional hand pays out at double multiples. The game further features a payout table that indicates the number of coins wagered. Payouts tend to increase at the same rate in which wagered coins increase. The interesting thing is that there are no special payouts on royal flush with four coins wagered.

If a players lose at any level, they will not be able to progress to the next level. However, they’re entitled to accumulated winnings made so far. They can only progress after collecting winnings and further doubling them. In the double game round, one card is dealt facing up and four cards are dealt facing down. As a player, you’re required to pick the cards facing down cards, if it turns out to be higher; the face up card doubles your chances of losing everything. Quite interesting, don’t you thinks so?