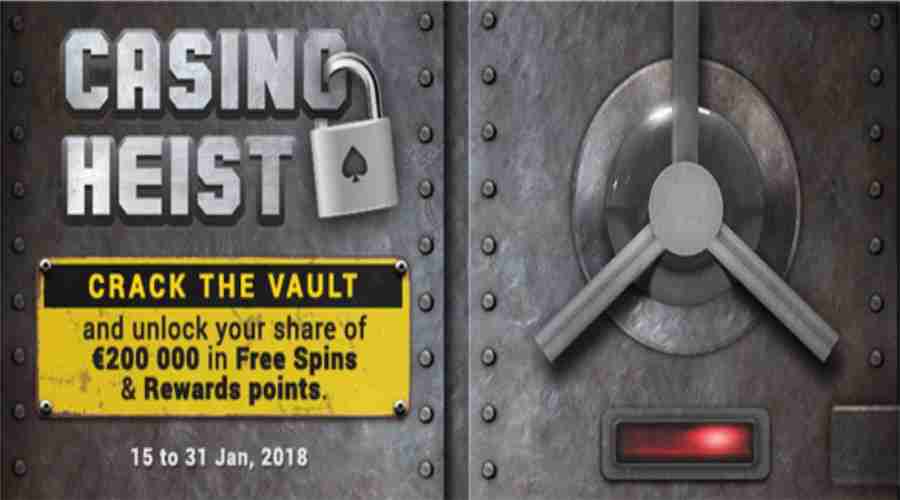 At least one time every day for 17 days a door to the mystery casino vault will be opened to reveal a massive casino fortune. The problem that remains; will you have the code and determination to open the vault leading to the biggest prize?

Players can test their luck from 15 to 31 January when the Fortune Lounge casinos will be running their largest Casino Heist to date. All this hype, what is locked in the vault after all? When the players have successfully cracked the code and opened the vault, the reward that makes them rich instantly awaits! Each player that opens the vault can win their share of €200,000 in the form of exciting and guaranteed casino prizes which also include:

If you are thinking this will be hard, it’s not. There is no need to rake your brains on ways to obtain the super-secret codes or try to complete their Ocean’s 11 to pull off their perfect casino heist. There will not be any need for that. Rest assured, this promotion will be much easier than anticipated by the players.

The promotion is very easy to win and the rules, for such promotion, are much simpler than expected so the players enjoy rather than being tense, here is how it will work:

Do not waste this glorious opportunity! Start playing the Casino Heist at the Fortune Lounge casinos of your own choosing, and try your luck at the biggest heist in history.

The greatest casino heist in the history of gambling!

Not a legend but history; Bill Brennan was regarded as one of the most successful casino thieves in time. Being a cashier at the most popular Las Vegas casino “Stardust”, Brennan was least suspected to pull off a flawless heist not because of his job, but his long-term employment and reputation of being an honest worker. He used his career as the ultimate distraction and took home with him his fortune all in front of everyone without trouble.

On one of the nights of ’92, Cashier Bill Brennan left his workplace like any normal employee but with a backpack. This backpack was stuffed with all the chips and cash worth $500,000 from the casino winnings. No one noticed the major heist and the perpetrator vanished in the thin air never to be seen again. This is regarded as the most successful heist not because of the value of the booty, but because of its simplicity. No fantasy stunts or master plan, no guns and a team, just a simple grab and run.  Bill Brennan, to this day, is on the FBI’s Most Wanted and the heist was featured on the famous TV show “America’s Most Wanted” due to its immense popularity. Some light was shed on casino’s history and was found out they had ties to a mob who were not happy with the theft and made sure Brennan was put in the right place.