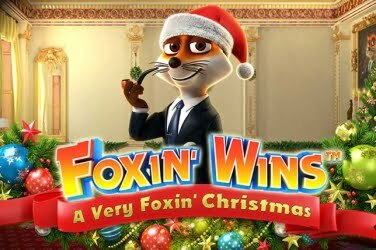 Foxin Wins A Very Foxin Christmas slot is an ideal addition to NextGen’s collection of Festively themed games. Released in November 2017 players are invited to the Foxin’s grand Mansion to join in with the celebrations.

Located in the center of a large inviting room are the games 5 reels set within an ornate gold frame that has colorful baubles decorating it. To the right is an impressive tree decked with various twinkling lights and a red armchair where Mr. Foxin sits to oversee the game.

It is possible to visit the Mansion via a Desktop or Tablet but for those on the go compatible Mobile devices can also be used. The game’s graphics are of the highest quality and the bold colors brighten the screen during play. A soundtrack of jolly music continues while the reels spin and it adds to the cheerful atmosphere that the designers have created.

Adorned with seasonal decorations are the bold 9 through to Ace playing card symbols. These appear often across the 5 reels and 3x matching symbols in a row are needed to generate a winning pay-line. This provides players with small regular pay-outs to gradually increase their jackpot balance.

Other symbols used in the game include a Gingerbread House, a Christmas Tree, a Wad of Cash and Mrs. Foxin driving a Sports Car loaded with gifts. Just 2x of these need to be on the screen for players to receive a cash prize although 3x or more will give bigger wins for them to claim.

Wild – Mr. Foxin wearing a Santa Hat is the main Wild symbol. This loveable character can alter any Basic Symbol when he appears on the reels to allow more chances for players to create a winning combination. It is also the highest paying symbol and will pay-out 80x the player’s stake for all 5.

There is a 2nd Wild symbol which is depicted as a Fox Pup hidden within the game’s format. However, during the Base Game, it can only randomly appear on the 3rd reel to substitute for another symbol. If the player wants more to be allowed to land then they need to utilize the SuperBet Feature which is described in more detail later.

Scatter – the Scatter symbol is a Gold Pot filled with coins and at least 3 of these need to fall for the Bonus Round to be activated.

SuperBet Feature – this is a unique element to numerous slots designs from NextGen and it means that if the player chooses they can make an additional wager to give them more potential to win.

By increasing their wager by 0.35 then the Fox Pup Wild symbol will not only land on the 3rd reel but also on the 2nd and 4th. However, if they stake an additional 0.50 then the Wild can be found across all 5 reels to give players more winning opportunities.

Fox Funds – at any random time during the Base Game Mr. Foxin can fill the screen to reveal a cash prize to be added to the final jackpot amount.

Leprechaun Shakedown – this again occurs randomly and here players will see a Leprechaun race across the screen. The Fox is quick to chase him and if he is caught any cash is taken and given to the player.

Free Spins Bonus Round – when 3x Gold Pot Scatter symbols are spun then the player receives 10x Free Spins. Any pay-outs that are claimed during this part of the Foxin Wins A Very Foxin Christmas slots game are doubled and players will also find extra Wild’s on the reels.

It is possible to re-trigger this Round so there are 20x Free Spins up for grabs in this online slots which can result in a decent return on the player’s original bet if they are lucky enough.

Wager start at just 0.25 but this can be raised to 625.00 by using the +/- button on the Control Panel. This makes it online slots that players with any type of budget can enjoy with just 5 reels and 25 different winning pay lines.

This is a light-hearted game that gives players lots of entertainment while they watch the reels spin. It’s Medium Variance allowing an RTP of 95.61%, something that is already proving popular with regulars and beginners alike.

The key to this slots is to opt for the Level 2 wager to let the Fox Pup Wild fall onto any reel. This along with Scatters, Free Spins and Multipliers there is plenty to have players returning to the Foxin Wins A Very Foxin Christmas slots game.

– Give A Very Foxin Christmas a free Spin here or go to NextGen Gaming Casinos to play for real money. 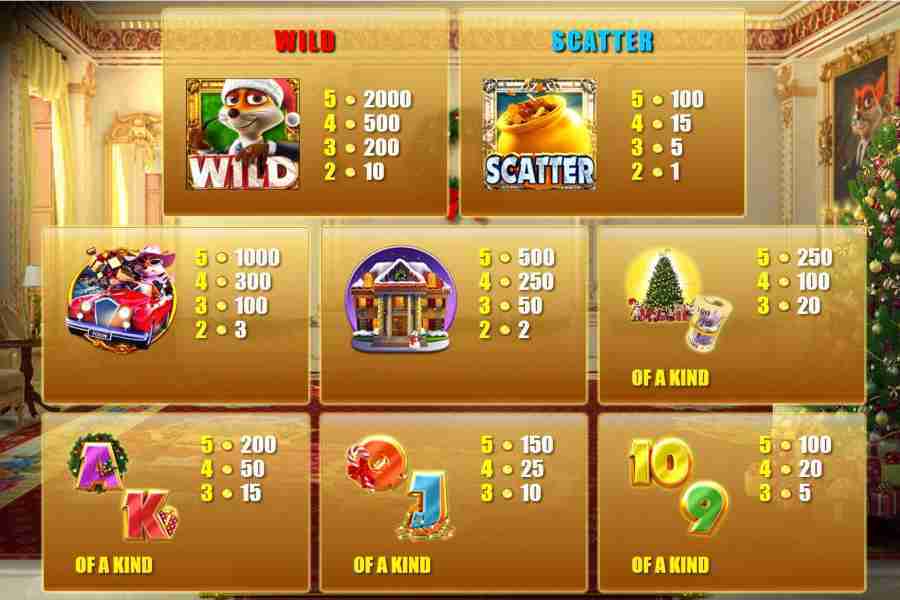 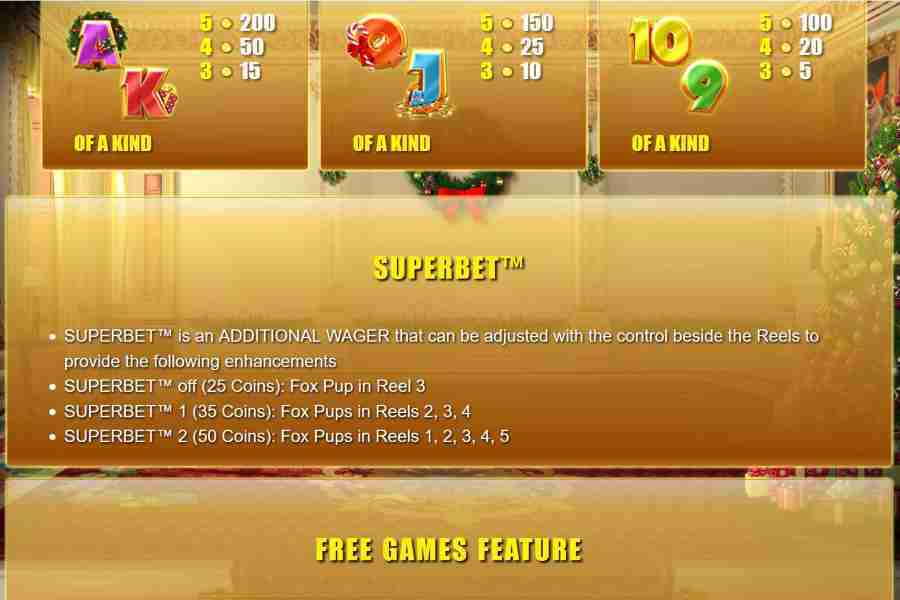 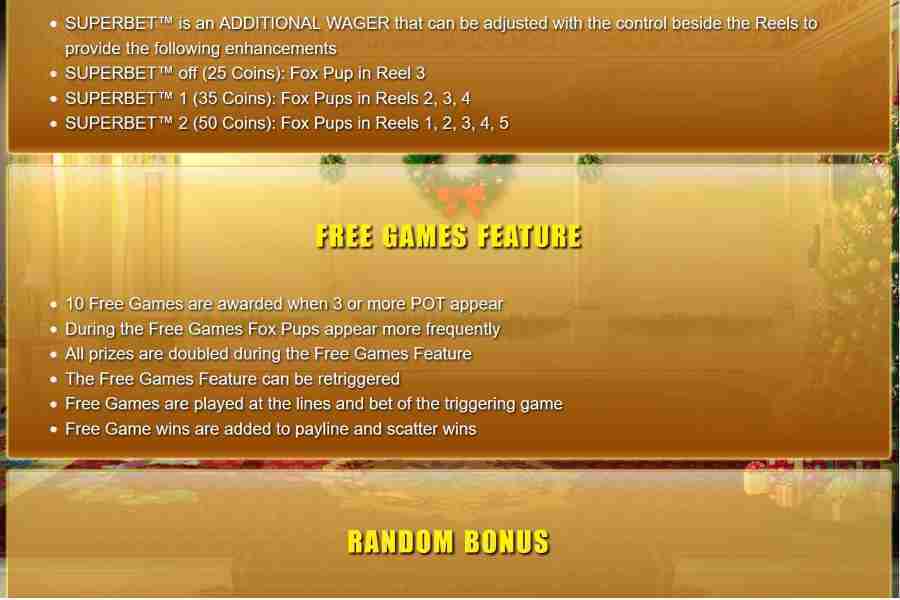 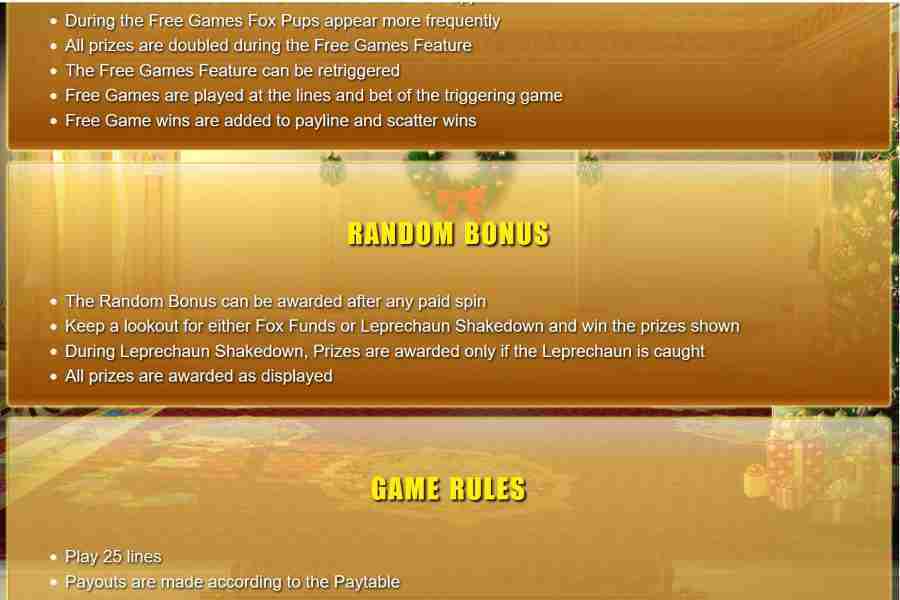 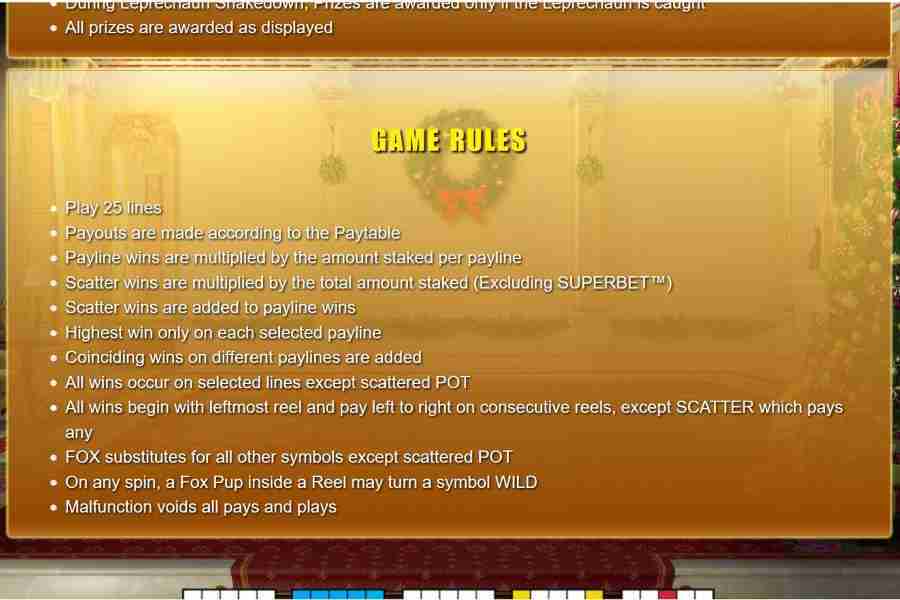 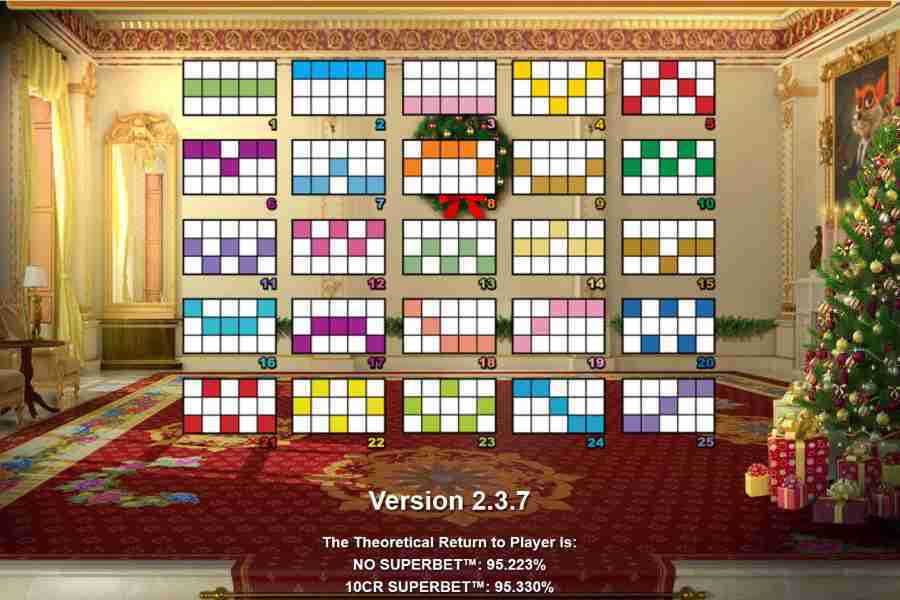 Casinos & Bonuses For This Slot Game

Foxin’ Wins A Very Foxin’ Christmas is a non-progressive 5 reel 25 pay-line video slot machine game from NextGen Gaming, it has a Christmas theme, and comes with a wild symbol, scatter symbol, free spins and has a maximum jackpot win of 200 coins