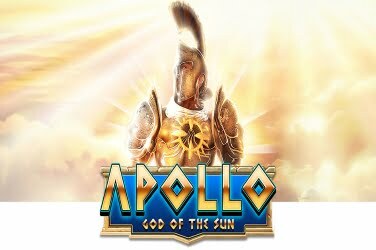 Players can return to the times of Ancient Greece in this online slots game. When beautiful maidens wore flowing white robes and males battled against each other with full suits of Armour. Apollo himself stands proudly to the left of the reels and his character becomes animated during the game which adds to the fun as player’s watch the reels spin.

All the graphics have been intricately designed and look stunning across any size screen. So it doesn’t matter if the player is using a Desktop, Tablet, or their Mobile device  they can still enjoy this slots game. And should the player need to be away from the screen there is an Auto Play button that they can utilize at any time. This means that players can allow the game to continue automatically to their specified settings so that they are in full control at all times while being busy doing other things.

Players can find the 5 reels set between large white Grecian columns with flaming torches at either side. There is also an appropriate thunderous soundtrack which plays in the background and this along with the hazy cloud filled sky adds to the tense atmosphere that has been created in the Apollo God of the Sun slots game.

Appearing as if carved from stone are the 9 through to Ace symbols which are the lowest paying in this online game. Those which provide a slightly higher pay out include a Clay Jug, a Greek Pillar, and a Warrior Face Mask. Yet if the player spins the Suit of Armour symbol they can expect even more being added to their jackpot balance. And should all 5 reels be filled with this symbol then players could receive up to 500x additional coins to claim.

Wild – a Flaming Sun symbol is the Wild and it can burst onto the screen at any point during the game. Now they can heat up the game as they change any Basic Symbol if there is the chance of creating a winning combination.

In addition to this if all 5 symbols are spun then players will see their balance increase and this could be up to 500x coins.

Scatter – a Temple “Free Spins” symbol needs to land on the 1st, 3rd, and 5th reels for players to activate one of the numerous Bonus Feature that this game provides.

Muse – when this “Bonus” symbol appears on the screen players will be rewarded with a further Feature which can also add to their final balance.

Almighty Sun – randomly the Apollo character may stir into action to become animated. Enticing the Sun from the sky above and adding “stacked” Wilds to 1 or more of the games 5 reels.

Free Spins – 7x Free Spins are given if at least 3 Temple symbols are located once the play button has been pressed. With an extra twist the Almighty Sun Feature is also in play during this Bonus Round so players can benefit from some big wins if the reels fall in their favor.

Muse of Music – there is a long haired Maiden “Bonus” symbol that is needed to activate this Feature. Her image must land upon the 2nd, 3rd, and 4th reel for the player to be taken to a “Pick ‘Em” style game for them to enjoy.

Now the player must flip a coin on a 2nd screen to reveal an instrument and when the images match a cash prize is added to the final balance.

Progressive Jackpot – this can be rewarded to players at random at any point during this online slots game. It is certainly a Feature that is proving appealing to high rollers and those who want to aim for a big win. But it can be rather elusive so players need to keep an eye on their budget although it is well worth the wait due to the big wins that are on offer.

Those players with a limited budget can set the reels of this game to spin by placing just 0.20 before pressing the Play button. However if players are prepared to risk more of their bank roll the highest amount that can be wager is 200.00 which can provide some lucrative wins once the reels have been spun.

Numerous Bonus Symbols and Features can be found among the games 5 reels and there are 20 structured pay lines which all add to the player’s initial stake when matching symbols are located. The fast pace and variety of Features may prove a little confusing to beginners. However with a RTP of 97.17% and although considered a Medium to High variant game Apollo God of the Sun is still proving to be a big hit with players worldwide.

–  Give Apollo a free spin here or visit Leander Casinos and play for real money. 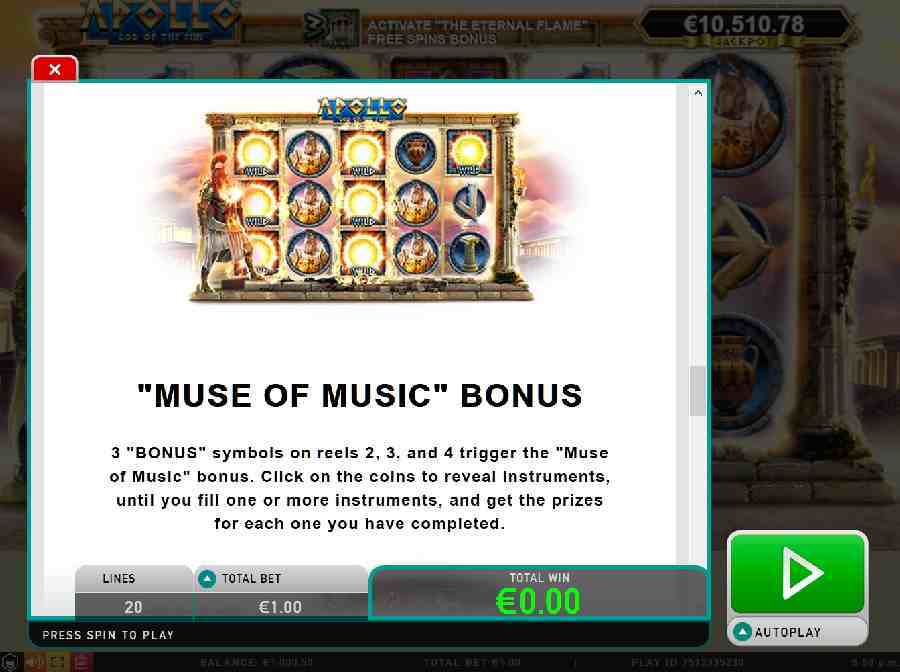 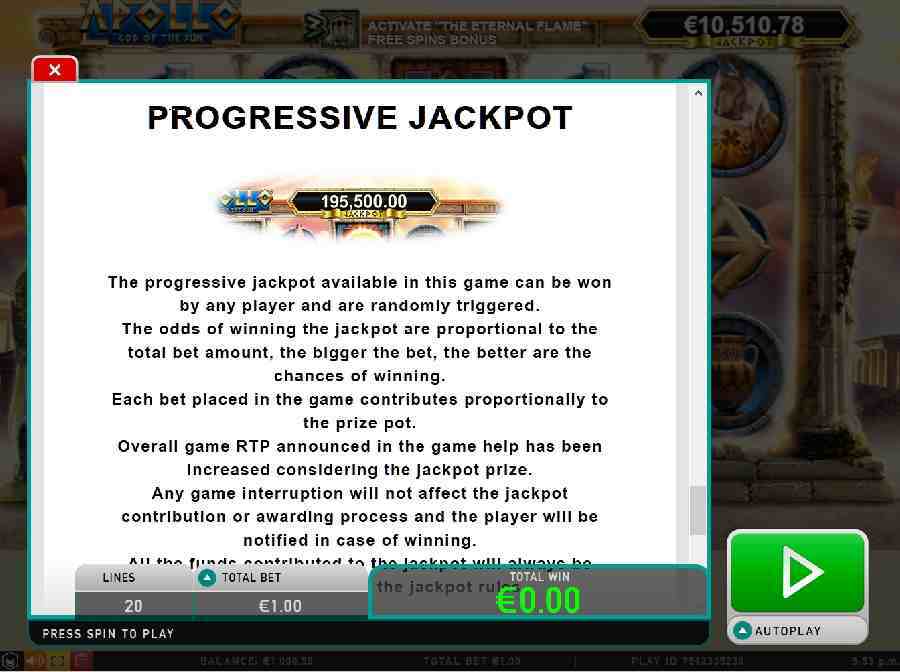 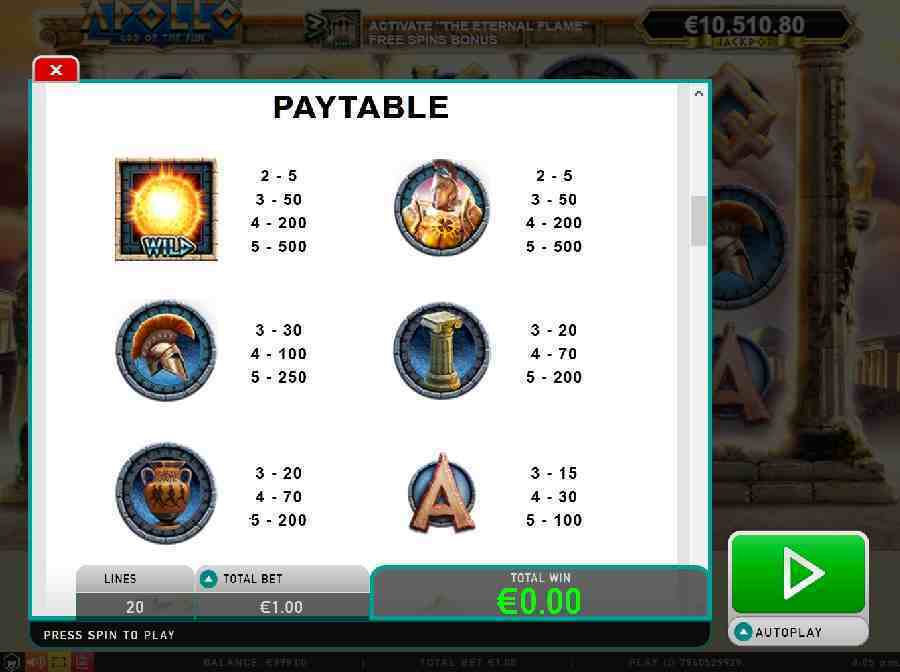 Apollo God Of the Sun is a progressive 5 reel 20 fixed pay-line video slot game from Leander Games, it has a Greek mythology theme, and features almighty sun feature, Muse of music pick me bonus and Progressive jackpot, with a maximum jackpot win of 500x