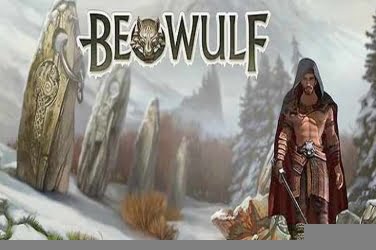 Pragmatic Play have used high quality 3D graphics in this Viking themed release. It follows the Scandinavian legendary tale of King Hrodgar of the Danes who was said to ask for Beowulf’s help to defeat the monster Grendel who was terrorizing his lands. A dramatic soundtrack plays as the 5 reels spin while players join the games hero on his quest while discovering various treasures along the way.

A moonlit castle is the backdrop to the reels which are set within a golden frame. Providing 40 winning paylines and numerous Bonus Features this entertaining slots can be enjoyed by players of any level who want to embark on this epic journey.

Released in September 2016 the designers have made is accessible on Desktop, Tablet and Mobile devices. So players from around the globe can take in the crisp clear colors and animations while watching their jackpot balance mount.

Players can find different colored symbols in the shape of a Diamond, a Club, a Spade, and a Heart upon the reels of this slots game. Although they don’t award much when they are included in a winning combination it a sure way for players to increase their initial wager.

There is also a Silver Ring, a Horn, and a Viking Longboat which are also used as symbols in the game. But it is the silver haired King Hrodgar and the flamed red haired Maiden symbols who can add up to 800 or 1500 coins to the players balance respectively.

Wild – a sparkling green Emerald is the Wild symbol used in the game. Despite the Scatter it is able to change other symbols so that a winning combination can be created.

Scatter – this symbol is Beowulf’s Shield and 3 or more need to be located on the reels for 1 of the Bonus Features to be activated.

Super Re-Spin – not only is the Beowulf symbol the highest paying in the base game offering 2500 coins when 5 of them fill the reels it also activates this Bonus Feature. It will come into play when the symbol is shown stacked upon the 1st reel. At this point in the game all but this symbol is removed and the spaces left blank. Now 3x Free Spins are given and if another Beowulf symbol appears during this time they will Freeze in place. This Bonus Round continues until either no more of the symbol are found or if the screen is filled which will then reward the player with a 2500x Multiplier based on their initial wager.

In an additional twist to this round players will also receive an extra Free Spin for each symbol that appears. Meaning that there are even more opportunities for players to increase their final winning amount.

Free Spins – depending on how many Shield Scatter symbols were on the reels when this Bonus Round was activated will determine the reward that the player will receive. This can be 10x, 15x, or 20x Free Spins which also includes a 1x, 5x, or 25x Multiplier so players can maximize on their initial stake even further.

Not only can this Feature be re-triggered at any time there is only the chance to activate the Super Re-Spin Bonus Round as well. It provides players with numerous opportunities to create more winning pay outs to be added to the balance they will finally be able to claim.

Providing 40 winning structured paylines Pragmatic Play have ensured this slots game is appealing to anyone who enjoys online casinos. It offers a wide range of wagered amounts which can be from 0.40 to 200.00 with each spin of the 5 reels.

Players can discover an Emerald Wild to create more winning combinations and a Shield Scatter which can lead to the Free Spins Bonus Round with various Multipliers. There is also a Super Re-Spin Feature that can be taken advantage of throughout play.

Auto Play has also been included in the games format meaning that the game can be set to run automatically. This is ideal for those who prefer to be less interactive with the software or need to be away from the screen. The reels can be left to spin for a certain amount of times or until the maximum wager is reached.

For any player who enjoys the ancient Viking theme there are numerous changes for them to win with the Beowulf slots game which can be found in any Pragmatic Play online casino. 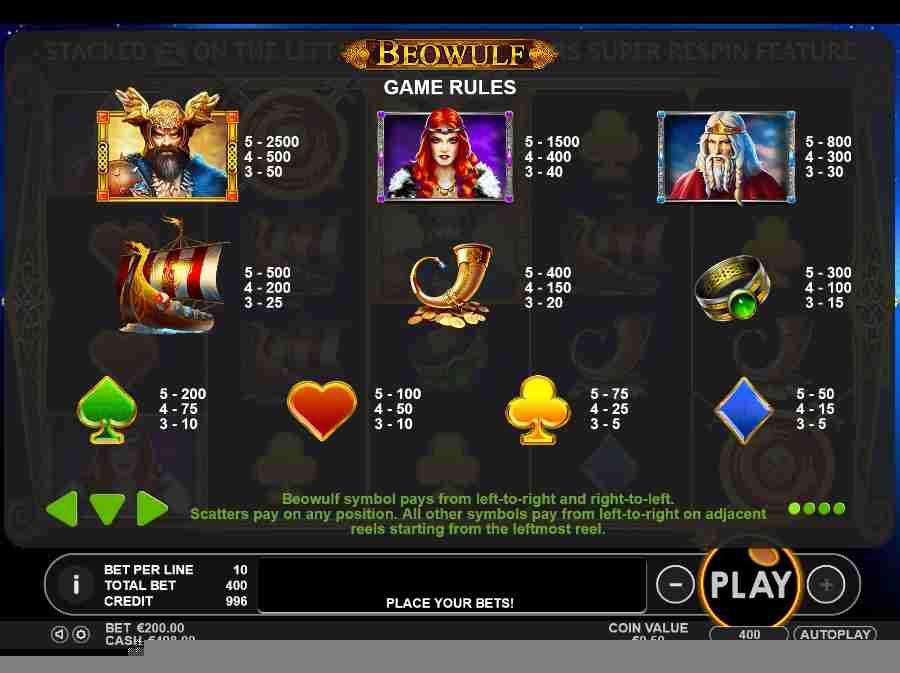 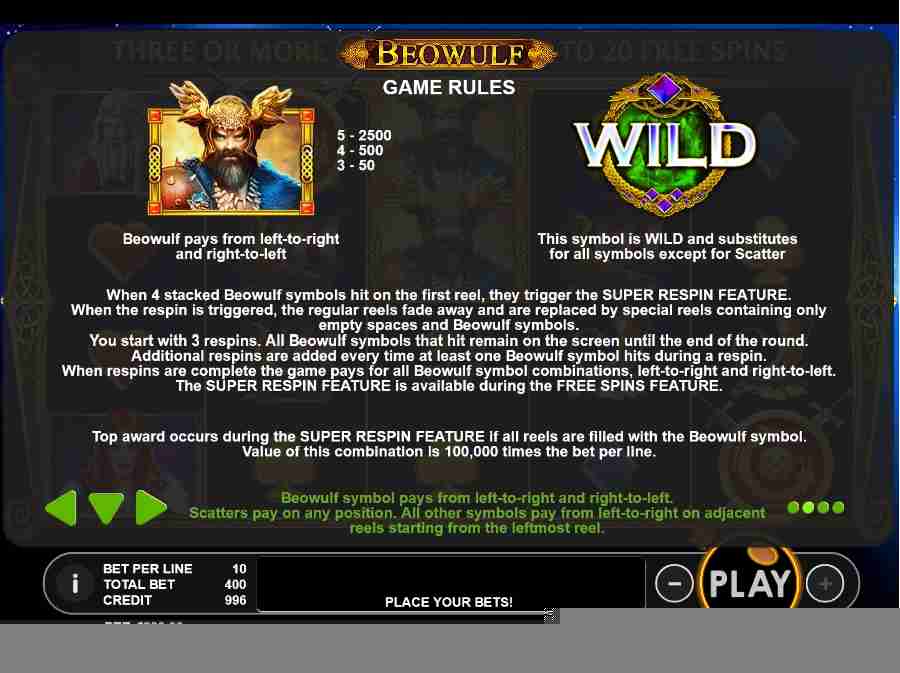 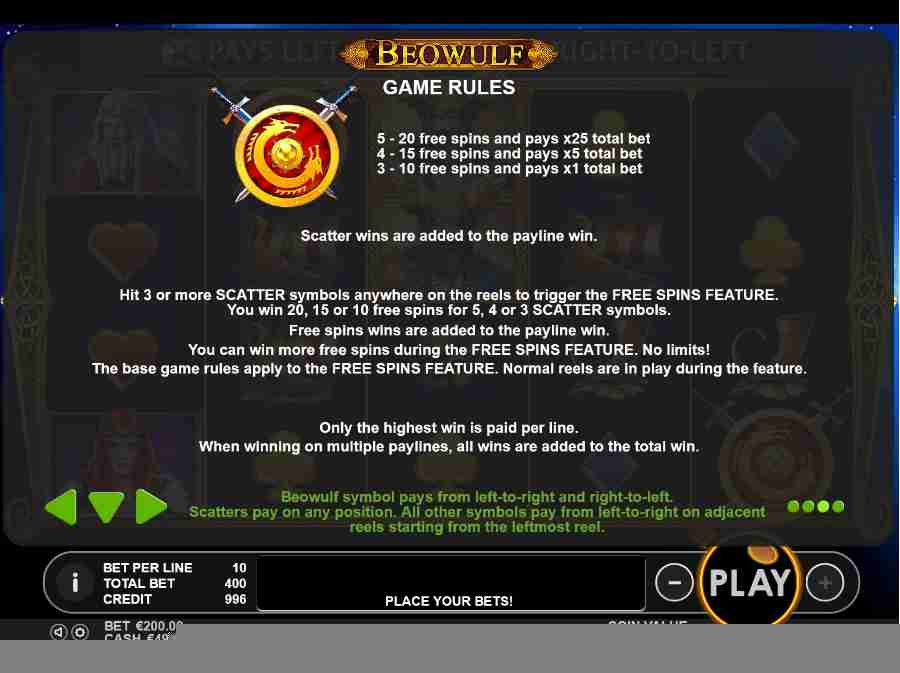 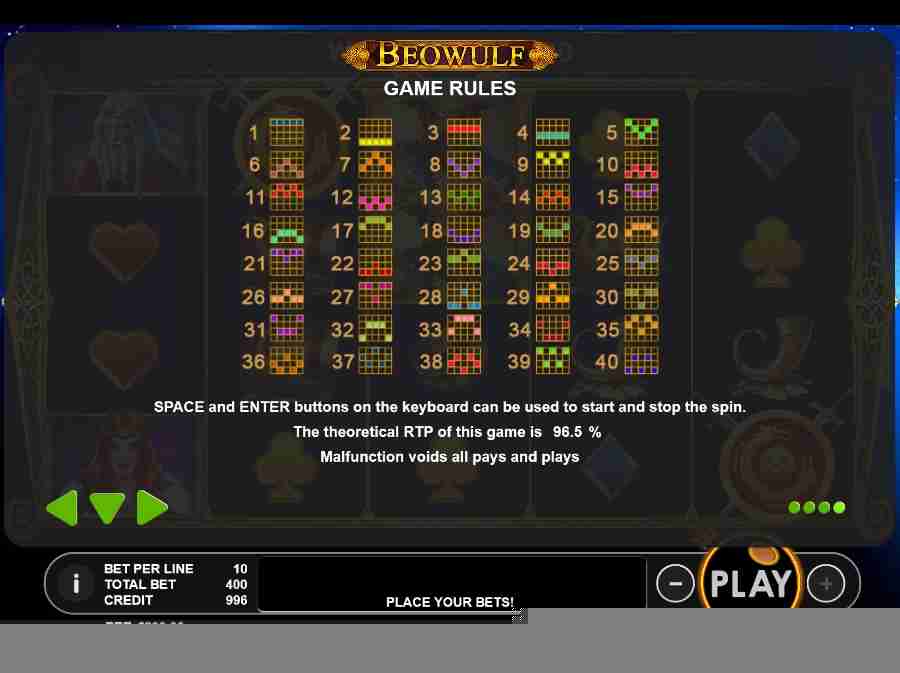 Beowulf is a non-progressive 5 reel 40 paylines video slot game from Pragmatic Play, it has a Viking adventure theme, and comes with a Multiplier, Scatter, wild symbol, free spins and has a maximum jackpot win of $12,500