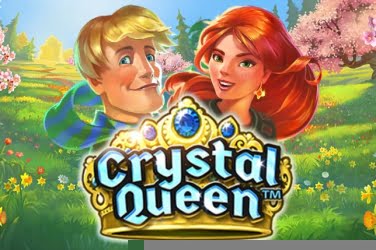 This slots game from Quickspin is based on the story of the Snow Queen that was penned by Hans Christian Anderson. Players will find themselves amid the fairy tale as the reels are set upon a wintery background. Showing snow-laden trees with a white blanket covering the ground beneath.

There are 20 winning paylines to be found within the game and all the graphics are of highly detailed quality. Some players may think of the movie Frozen when they see the symbols and images that have been used in the game design. And this is further enhanced by the Disney-like soundtrack which plays in the background throughout.

Since its release in August 2015 players have been able to access these online slots via Desktop, Tablet, and all Mobile devices. So whether they are in the home or out and about players can enjoy all the fun that can be found in the Crystal Queen slots game.

Bold and chunky different colored 10 through to Ace images are the lowest paying symbols used in the game.

The other symbols that can be found are a young red-haired Girl, a blonde-haired Boy, their trusty Reindeer, and of course the Snow Queen herself.

Wilds – the Regular “Wild” is colored in gold and is only located on the 4th and 5th reels during the base game. However as it can change others besides any Bonus Symbols it means that there are further chances of winning combinations to be found.

If the Free Spins Bonus Round is activated players will see these Regular “Wilds” also appear on the 1st and 2nd reels. This means that there are more opportunities for a winning payline to be found during this point in the game.

A gold Spreading “Wild” is also used as a Bonus Symbol within this slot game. In the base game, these can be found on the 1st, 2nd, and 3rd reels. These will move to the 2nd, 3rd, and 4th reels if they are spun during the Bonus Round. In either instance, they will spread to adjacent positions to generate higher wins to be added to the player’s jackpot amount. This can result in some big wins if all 5 reels are filled with this “Wild” symbol.

Scatter – a Red Gem set within a gold casing is the games Scatter symbol. Players need to spin 3 or more of these to activate 1 of the Bonus Rounds.

Sweeping Reels – this is the main feature of this online slots game and it has been creatively thought of to add a different element to keep players entertained. When a win is created all those symbols involved will melt from the screen to allow others to fall into the empty spaces.

In addition to this players will see the frozen 3 rows at the top of the screen begin to melt with each consecutive win. This will provide them with more winning paylines along with a growing Multiplier to be included in any pay outs.

When no more wins are found this Bonus Round will end and players will see the upper rows re-freeze. Even so there is always the chance of re-triggering this Feature if another winning combination is found.

Free Spins Round – when at least 3 of the Red Gem Scatter symbols are found the player will be rewarded with 10x Free Spins. All 6 rows of the game will come into play which will provide up to 56 paylines. An additional Bonus at this point in the game is that combinations can be created from both left to right and right to left. This means that there are even further chances for players to increase their final jackpot figures.

Quickspin have kept the coin denomination low so players can wager anything from 0.01 to 2.00 on each of the 20 winning paylines that are available. This means that the game is proving appealing to players of any level with a maximum stake of 100.00 able to be placed on each spin.

With all the features that have been provided in the format of this casino release there are players from around the globe who are enjoying all the fun elements that can be found in the Crystal Queen slots game. 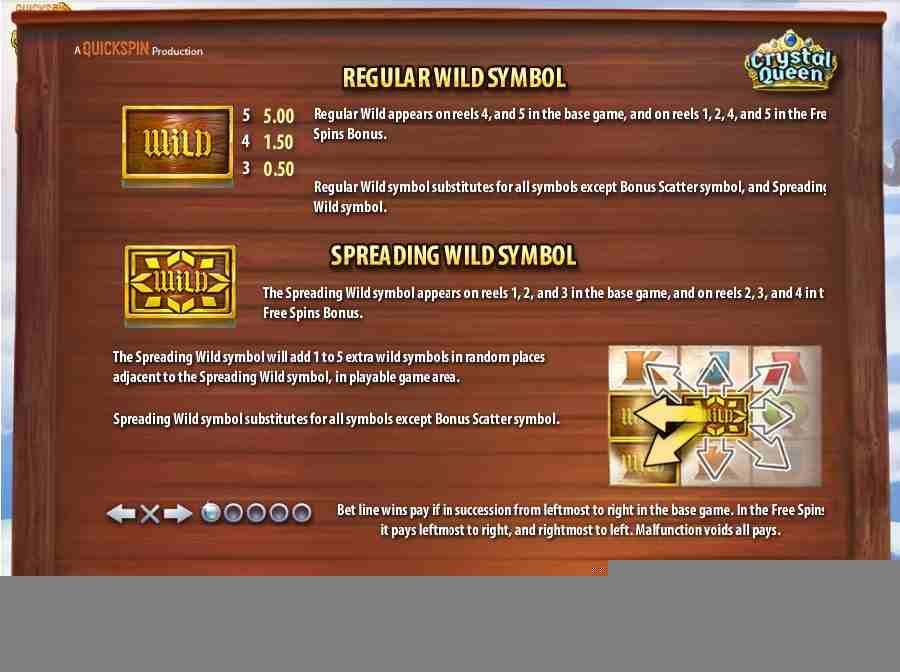 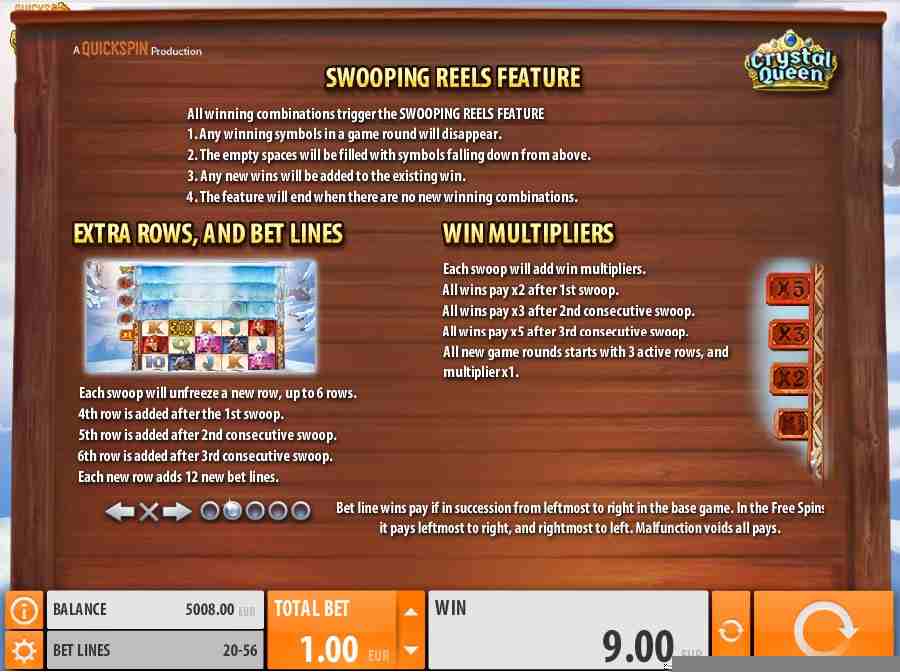 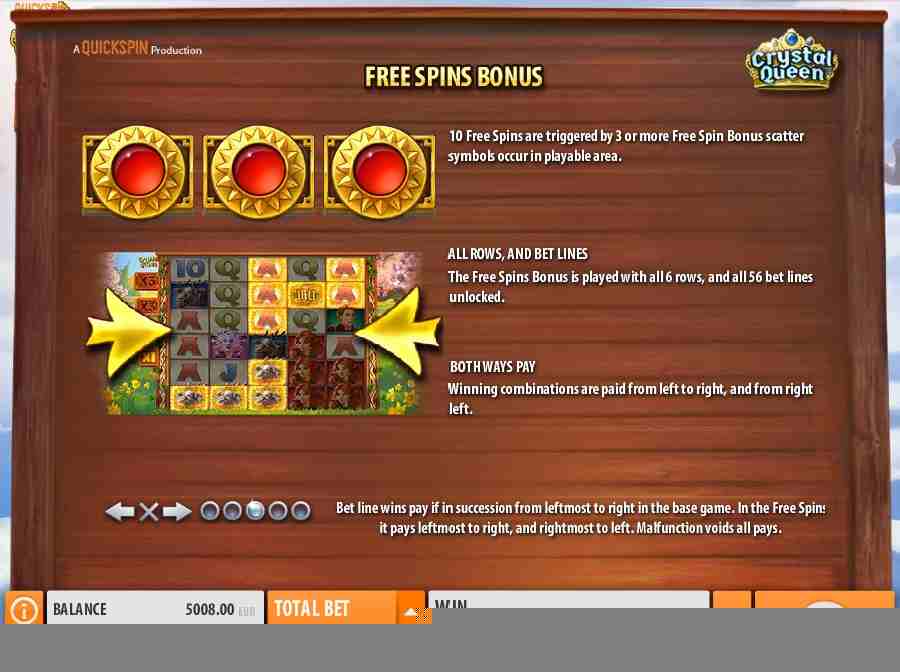 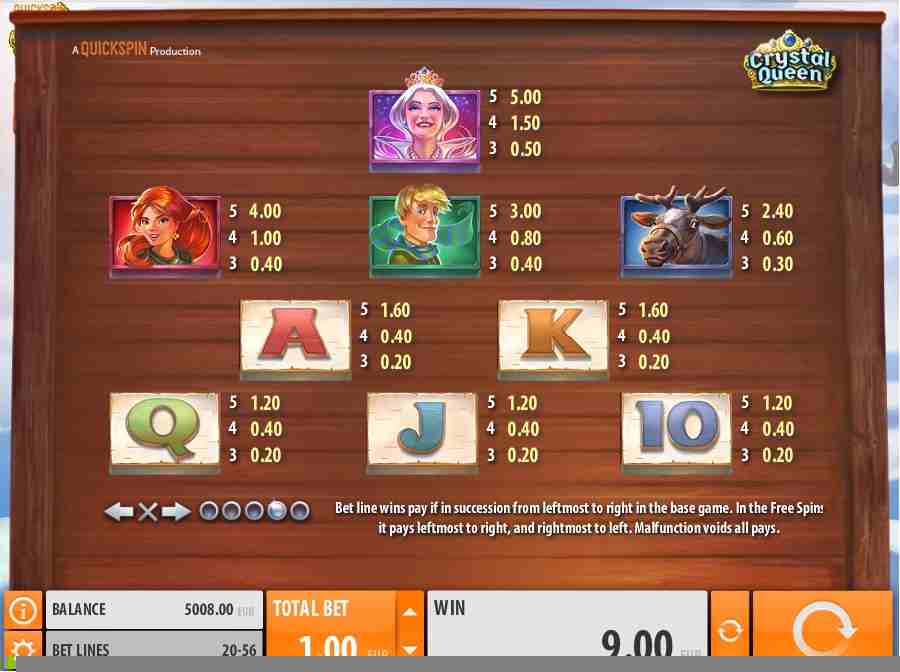 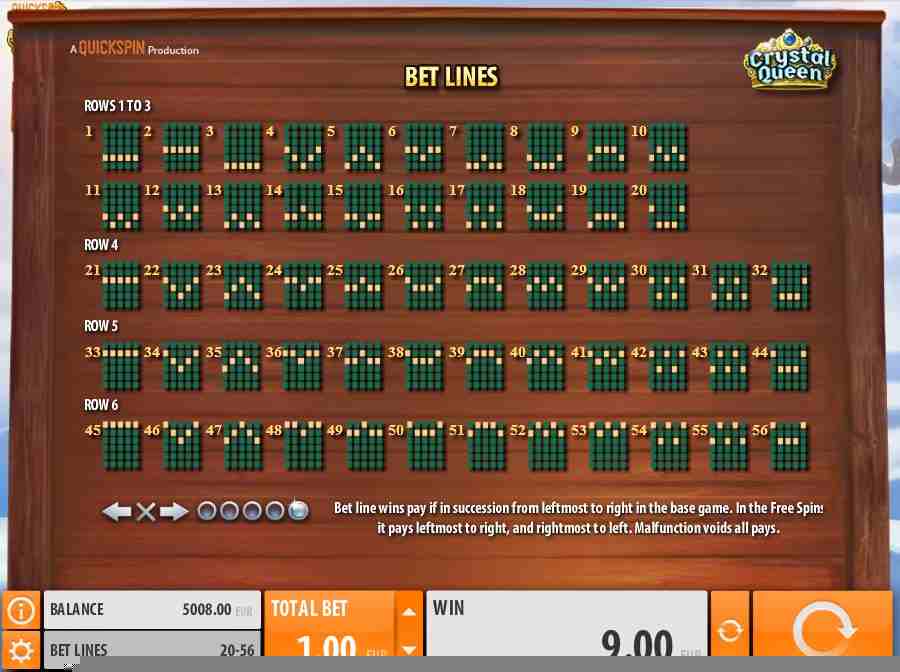 Crystal Queen is a non-progressive 5 reel, 6 row, 56 paylines video slot game from Quickspin, it has a fairy tale theme, the game features a Multiplier, Scatter, wild symbols, free spins and has a maximum jackpot win of $6250