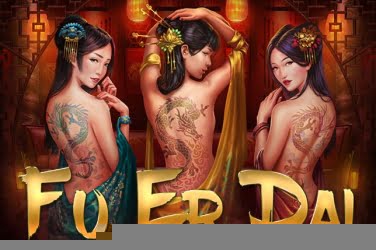 Fu Er Dai slots has been designed with the Chinese term of the “children of the nouveau riche” in mind. The symbols depicting the expensive items owned by those from the lavish lifestyle of this rich second generation.

There is an Oriental feel to this slots with Dragon’s being a prominent image. And as the game starts players will find themselves in what looks like either an Opium Den or some exclusive Brothel. A plush deep red couch in a cosy dimly lit alcove can be seen in the background. Upon this sits 5 reels which are surrounded by a golden frame with a Dragon curled around at each side.

Different shades of reds and golds fill the screen in this casino November 2017 release and there is also some relaxing tunes playing in the background. This helps to create a relaxing atmosphere which is a contrast to the fast pace that players can enjoy throughout the game.

Players using a Desktop or Tablet will be suitably impressed by the detailed 3D graphics that Play N Go have used. However for those using a Mobile device it is advised to have an updated version of Adobe Flash and to ensure that Java script has been enabled to be able to fully enjoy this online casino game.

There is an elegant feel to the 10 through to Ace symbols which is in keeping with the theme of Wealth. Each icon has its own deep rich color enhanced by a gold edge design at the bottom corner.

An expensive Watch, a Wallet, a set of Keys and a Gold Mobile Phone are further images used as symbols in the game. A dark-haired Male character also makes an appearance on the reels during the game and creates the highest paying winning combination.

Wild – a Gold Dragon symbol is used here but it is restricted to the 2nd, 3rd, and 4th reels. However when it does appear not only will it substitute any other symbol if a pay line can be generated it is also the link to this slots Bonus Features.

Wild Dragon Re-Spins – only 1x Wild symbol needs to be spun for this element of the game to come into play. Now players will see the image change into 1x of 3x different scantily clad women. The ladies looking provocative as they show the Dragon tattoo on their naked back. This beautifully designed symbol expands to fill the entire reel and remains “frozen” in place for 1x Re-Spin.

Wild Dragon Free Spins – if 2 or 3 Wild symbols are located on the reels they will “freeze” throughout the 5x Free Spins that are given. This may not seem like a lot but for each additional Wild that lands on the screen a further Spin is allowed up to a maximum of 20x. And as this Bonus Feature can be regularly re-triggered there a numerous chances for players to add to their initial wager while enjoying the Fu Er Dai slots game.

Bets can range between 0.10 to 100.00 and players are able to select their wager by using the +/- button before setting the 5 reels to spin. All 10 structured pay lines are now brought into play and pay-outs are given for each winning combination that is spun.

To help players increase their jackpot even more the Play N Go designers have included a Gold Dragon Wild symbol. However it can also advance players to the 2x Bonus Features that this online slots boasts. Giving players Re-Spins and Free Spins along with “stacked” and “frozen” Wilds adding even more thrills.

Some regulars to online casinos may be disappointed that there aren’t any Multipliers or Mini-Games included in the games format. But this fast moving slots still has plenty of entertaining elements to ensure players want to return to join the Chinese elite.

For those players who need to be away from the screen at any time there is an Auto Play button that is located on the Control Panel. This allows the reels to spin automatically which can be set for a certain amount of times or until the maximum wager is reached.

This is a Medium to High variance game so some players may need to keep an eye on their budget. However it does provide a RTP of 96.50% so both high and low rollers can experience the high life in the Fu Er Dai slots game. 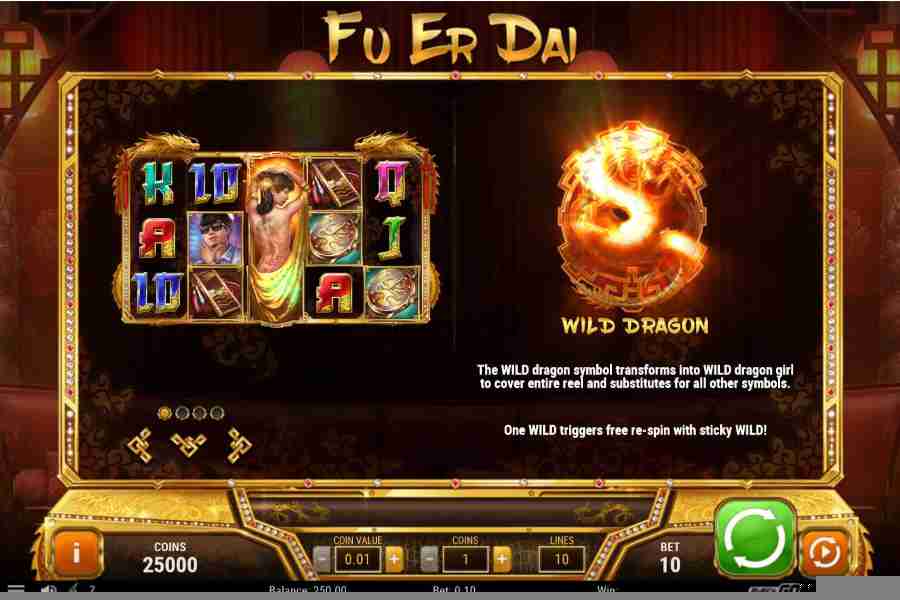 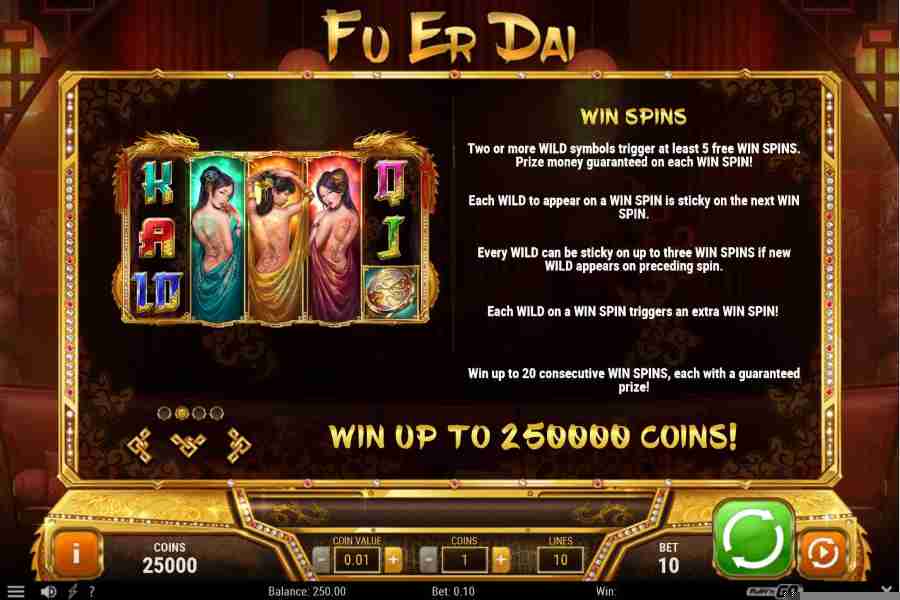 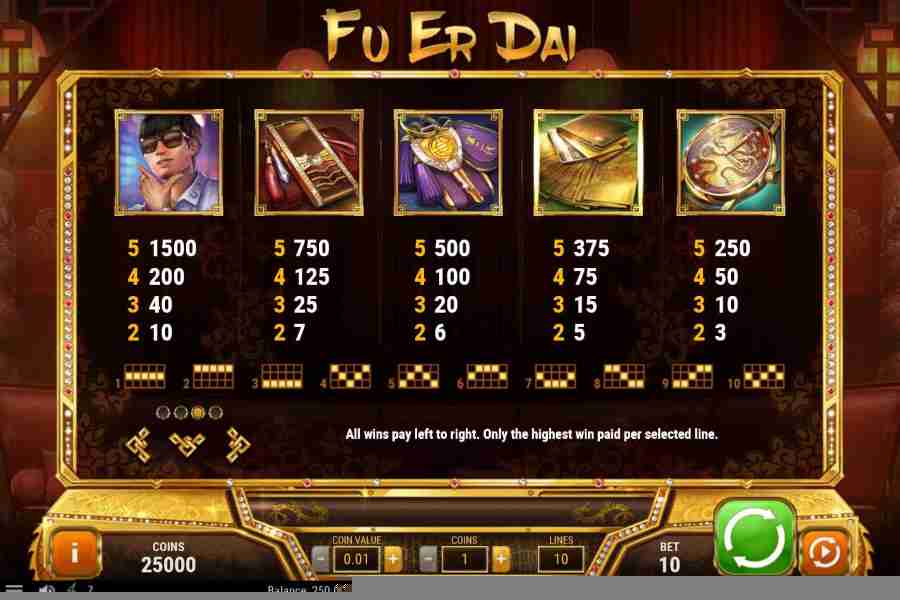 Fu Er Dai is a non-progressive 5 reel 10 pay-line video slot machine game from Play’n GO, it has a Oriental theme, and features Gamble Rounds, and free spins with a maximum jackpot win of 5000x you stake