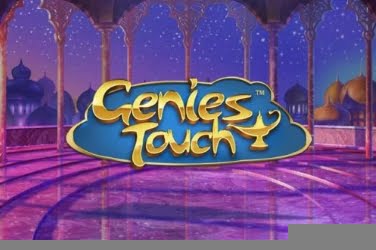 The mystical tale of Aladdin was first told centuries ago and is often used as the theme for online gaming. This creation from Quickspin is no exception and players can find the company’s usual quality graphics and animations throughout the game. A soundtrack of Middle Eastern music can also be heard which adds to the atmosphere of this slots offering.

A gold frame fills the majority of the screen but players can still glimpse the image of an Arabian palace beneath a starry sky. Different shades of pinks, purples and blues have been used helping to create a warm elegant feel to the game.

Though the game has been available on all Mobile devices since its release in February 2016 it can also be accessed on Desktops and Tablets so any player can enjoy the Genie’s Touch slots game.

Small Gems colored in White, Blue, Green, Purple, Yellow and Orange make up the lowest paying symbols. These treasures are joined by the games 4 main characters and include the Princess, her father the Sultan, an evil looking Wizard and the hero Aladdin which have all been designed in great detail as they are spun across the games 5 reels.

Wild – gilt in an ornate gold the “Wild” symbol is able to change any other icon besides the Scatter. This can create higher pay out amounts to be added to the player’s winnings and as the symbol appears often across the reels there are plenty of opportunities for them to increase the final jackpot balance.

Scatter – this is the Genie’s Lamp and provides players with 2 different ways to find more of the 20 winning paylines that are available in the game when they appear on the relevant reels.

Free Spins – players will receive 10x Free Spins if they locate a Scatter symbol on the 2nd, 3rd, and 4th reels at the same time. During this Bonus Round the 1st 4 reels will begin to reveal more of the Genie’s Lamp so that there are more chances for players to win. The Genie’s Touch Round can also be activated during this point of the game which is an additional bonus.

Genie’s Touch Bonus Round – if 3 or more Genie’s Lamp Scatter’s are found anywhere across the games 5 reels then this feature will be activated. Now the Genie will appear on the screen to cast her spell on a random adjacent symbol to change that and the Scatter to match so that they may be included in a winning combination.

All 20 structured paylines needs to be in play with at least 1x coin on each for every spin. But as Quickspin have set the betting range to vary from 0.20 to 100.00 this online slots game is proving appealing to players with any budget.

The game has a simple format with just 2 Bonus Symbols which are the Gold “Wild” and the Genie’s Lamp Scatter. However the Scatter is able to activate 2 Bonus Rounds which include Free Spins and the Genie Touch Feature. This may mean that regulars to online casinos may find the game rather dull. However it is ideal for beginners and those who don’t mind a slower pace of play.

Players can expect a RTP of 96.90% in this medium variance slots game. And there are some big wins to be had when the Bonus Features are activated. As these can be easily triggered the game provides numerous chances for players to win and the more that they have wagered will mean that they can see a higher return.

For those who need to be away from the screen at any time the Quickspin designers have included an Auto Play Feature. This means that players can set the 5 reels to spin automatically while they are busy doing other things. The game will either end when all the spins are complete or until the maximum wager has been reached.

As there is no Progressive Jackpot or Gamble Feature included in the games format some high rollers may not rate this particular online slots. However there are still numerous players from around the globe who are enjoying all that is on offer in the Genie’s Touch slots game. 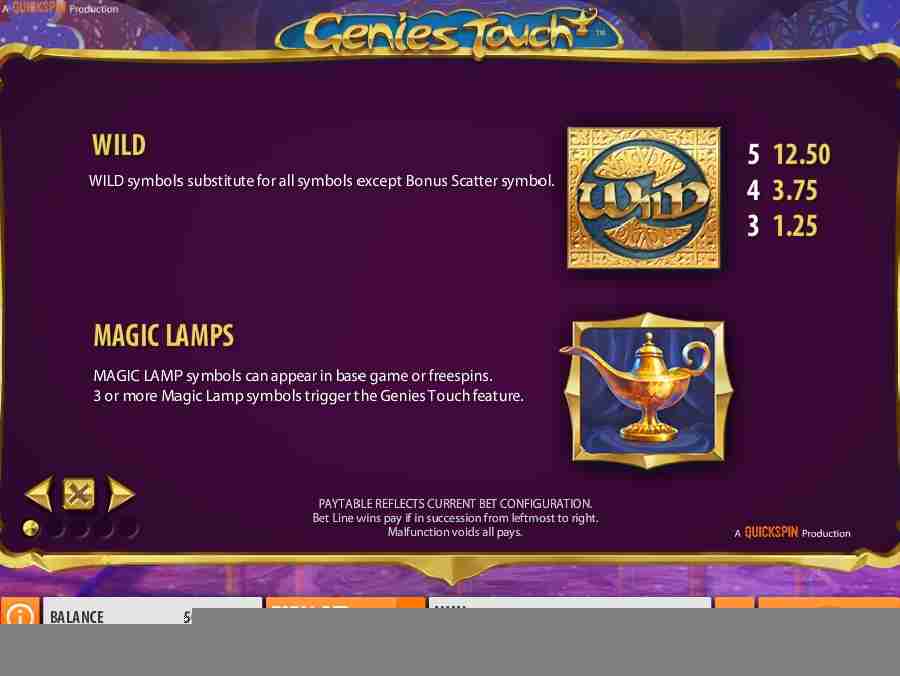 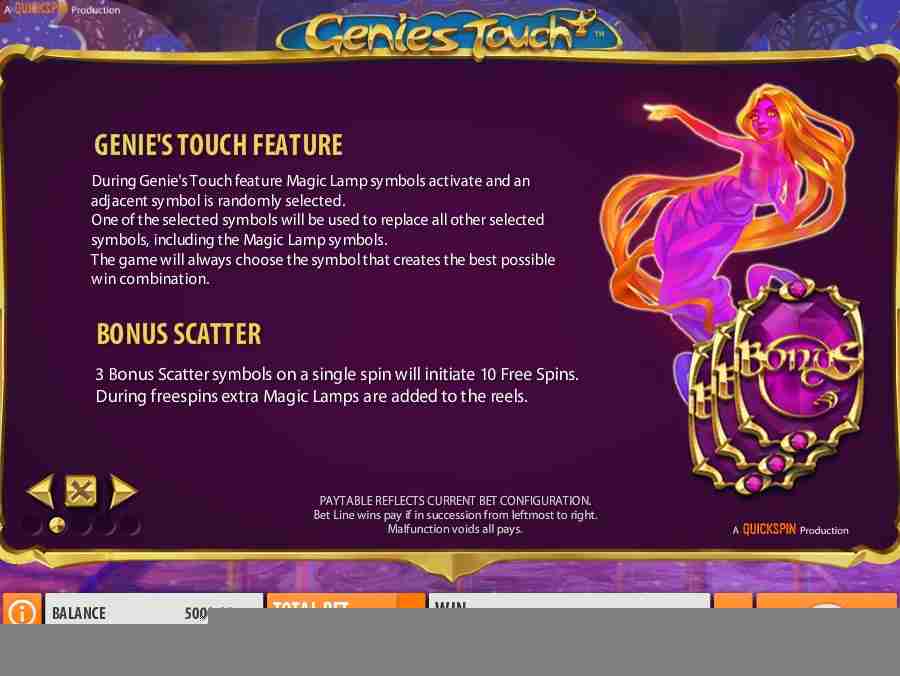 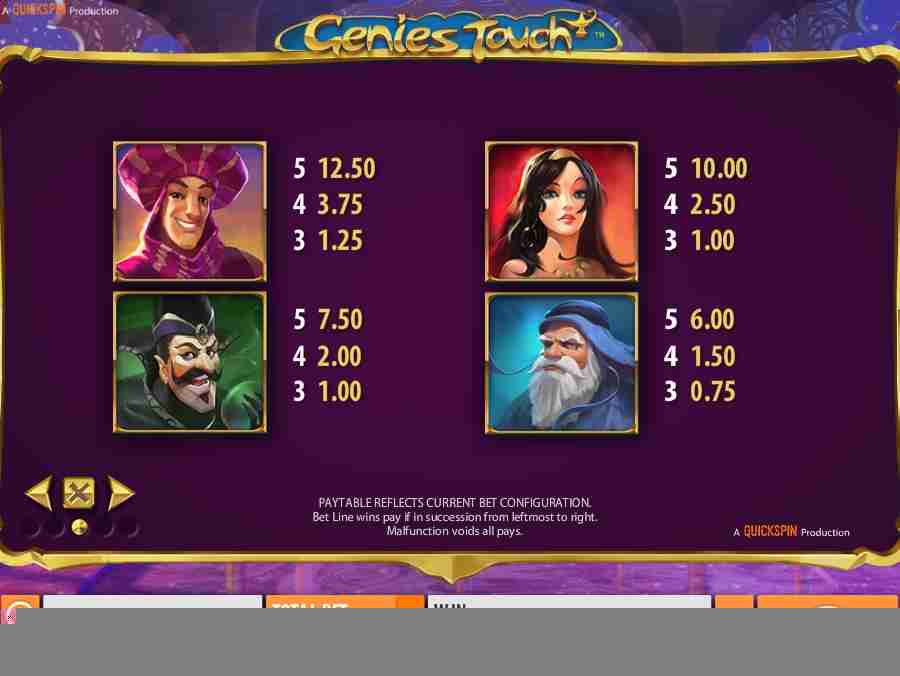 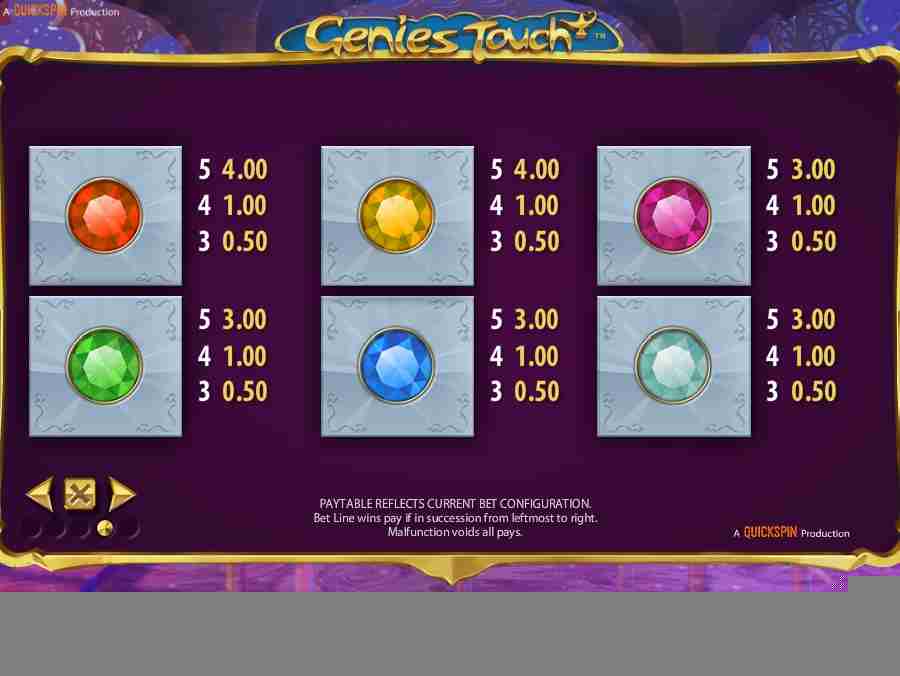 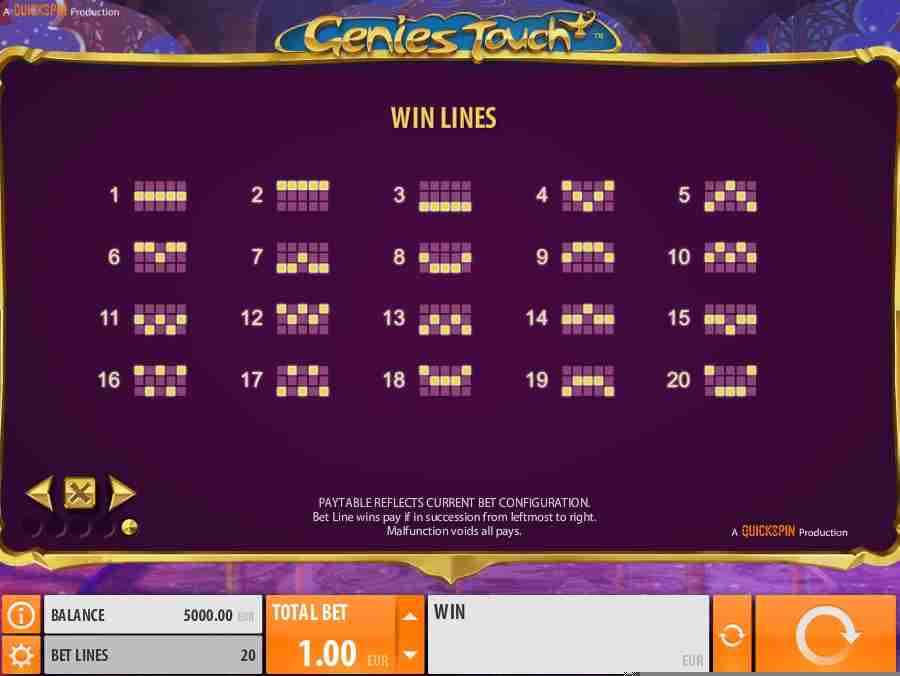 Genie’s Touch is a non-progressive 5 reel 20 paylines video slot game from Quickspin, it has a Arabian theme, and comes with a Scatter, wild symbol, free spins and has a maximum jackpot win of $1250