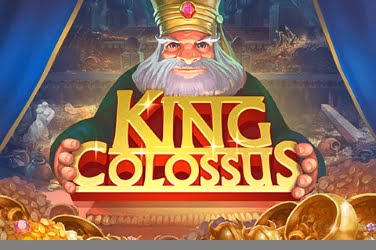 Quickspin has created their own character to dominate this online slots game and the image of King Colossus himself is used as a symbol during play. Although the 5 reels fill the screen they are encased within an ornate golden frame. This has a royal blue background which adds to the opulent feeling that the designers were aiming for.

There is certainly a feeling of wealth to this game and players can join royalty as they search for any of the 40 winning paylines. However, it is the Free Spins Bonus Round that provides players with several fun additions to the game’s format. So there is plenty to keep them entertained while they see their initial wager increase as the reels spin.

This online slots game was released in November 2014 and has proven popular with players from around the globe since then. A hypnotic soundtrack plays in the background throughout the game as players absorb the majestic atmosphere that has been created.

Players are able to access this slots game in any of the Quickspin casinos that can be found online. And it doesn’t matter if the player is using a Desktop, Tablet, or Mobile device they can still take advantage of all the benefits that are on offer here.

Delicately designed 10 through to Ace symbols award players with the lowest cash amounts when they are included in a winning payline. These are joined by 3 Gems that are colored in Blue, Purple, and Red. And of course, there is the head of the grey-haired bearded King Colossus himself which is used as a symbol in the game and plays a valuable part in the Free Spins Round.

Wild – there are 2 Golden Lion Wild symbols that can be found on the reels of the game. During the base, game players can see it looking directly ahead while it looks to roar fiercely. When the symbols appear it is able to change other symbols besides the Scatter in the hope of generating a win.

When the Free Spins are activated a Bonus Wild is added to the format and players will recognize the Golden Lion symbol even though it will now be facing to the right and can only be found on the 1st and 5th reel.

Scatter – this is shown as an open Pink Door, perhaps the entrance to the King’s castle inviting players to come inside and take advantage of the Bonus Round this symbol provides. Players can find the symbol on the 2nd, 3rd, and 4th reels of the game but should they manage to land all 3 in a row then the additional Feature will be activated.

Free Spins – only 5x additional spins are awarded to players at this point in the game, but Quickspin has included some creative twists to ensure it is full of entertaining elements for players to enjoy.

The right facing Golden Lion Wild is now added to the game and can be found on the 1st and 5th reels. At least 2 of these symbols will be in play throughout this Bonus Round and can often appear stacked so there are plenty of opportunities to add to their final jackpot balance.

Unfortunately, the Free Spins can’t be re-triggered at this time but there is a +1 symbol while they are in play which can add an extra turn if it lands on the screen.

Yet it is the King Colossus symbol which plays an important part here should he show his face on the 2nd, 3rd, and 4th reels in a 3×3 formation. Should this occur then the player can find some big wins being included in the balance to be claimed at the end of the game.

Every paying needs to be in play before the reels can be allowed to spin but Quickspin has given a wide range to their coin denomination so that this online slot is still popular with both low and high rollers.

An original stake from 0.40 to 120.00 must be placed before the “Play” button can be hit and if a winning combination is found the cash prize is then added to the balance. Allowing further chances there is a Golden Lion Wild symbol, and a Pink Door Scatter which in turn can activate the Bonus Round.

And with some many additional Features included when the Free Spins are in play there is plenty to entice players of any level to the King Colossus slots game. 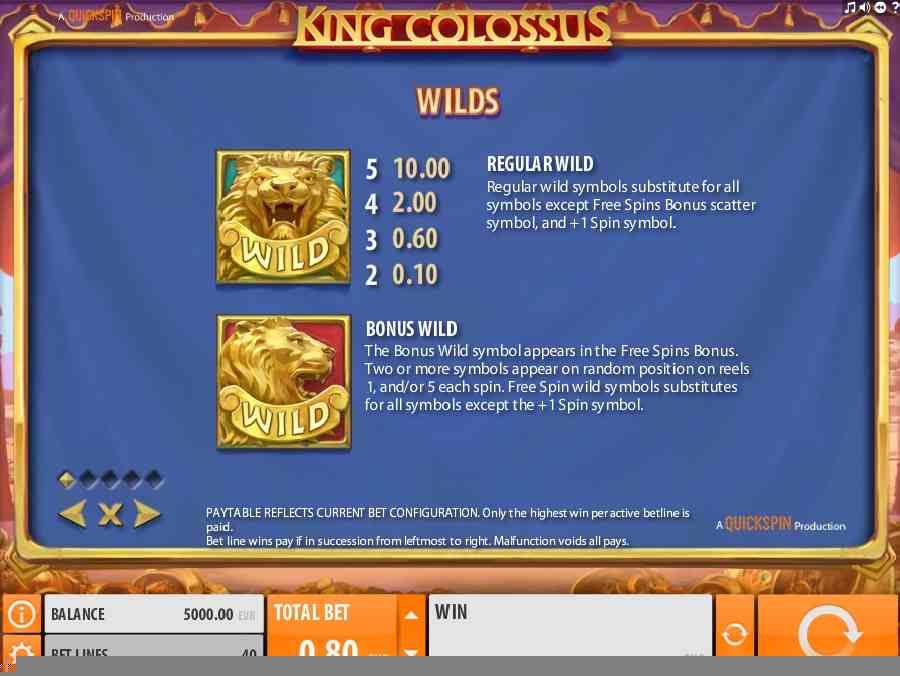 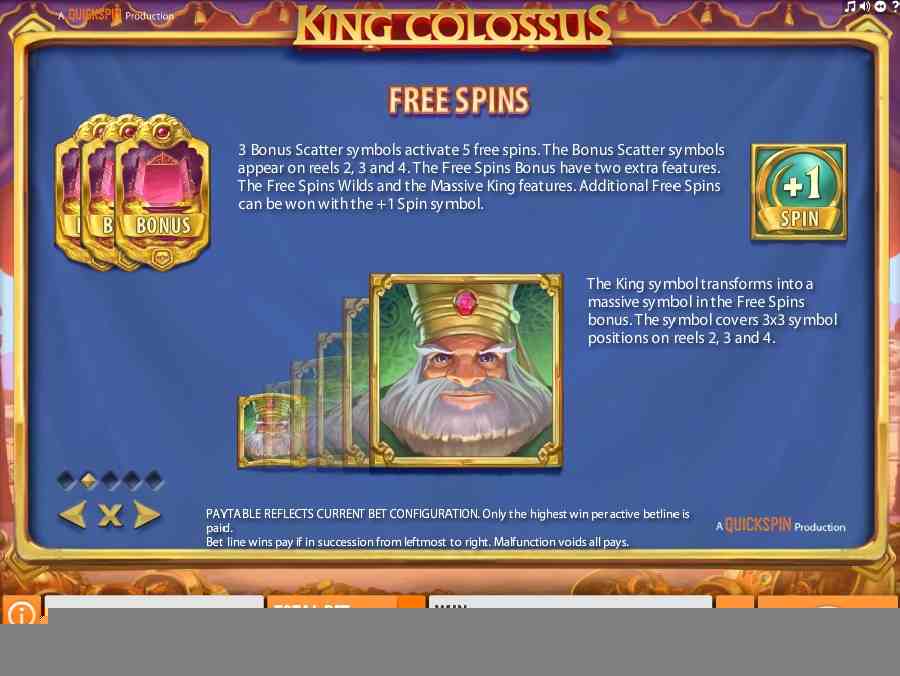 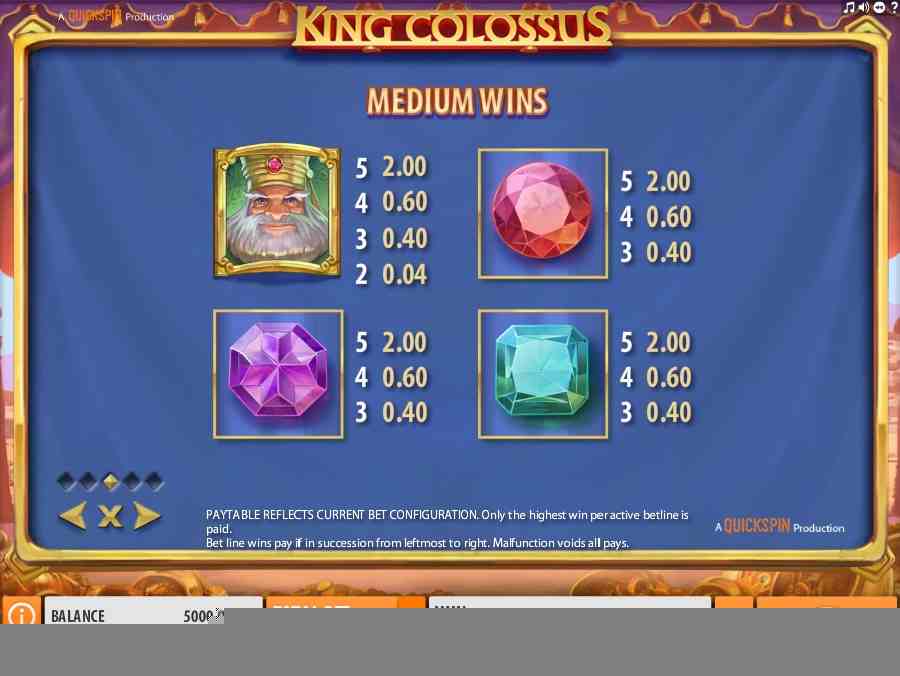 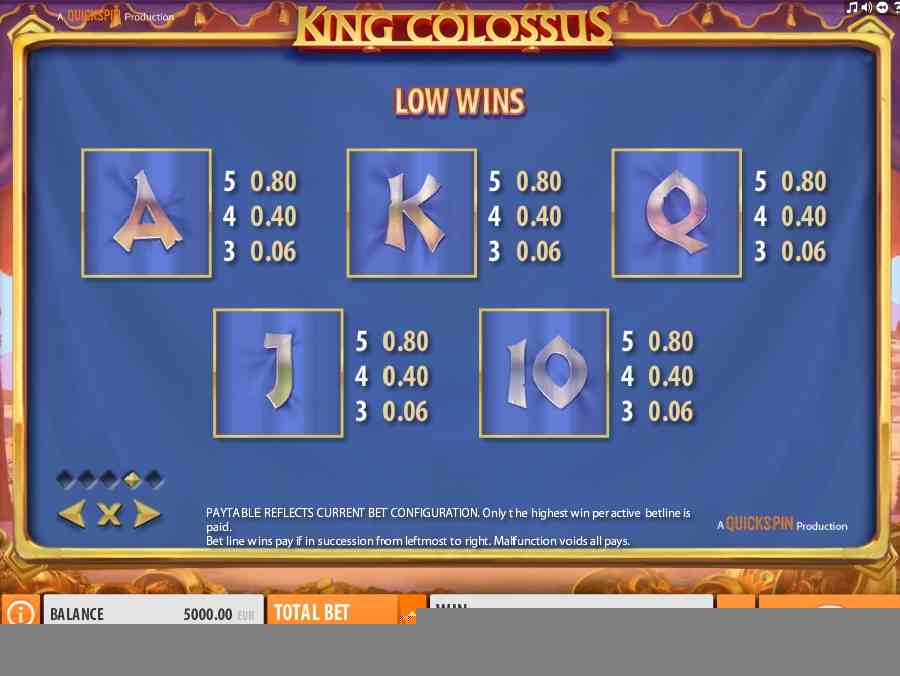 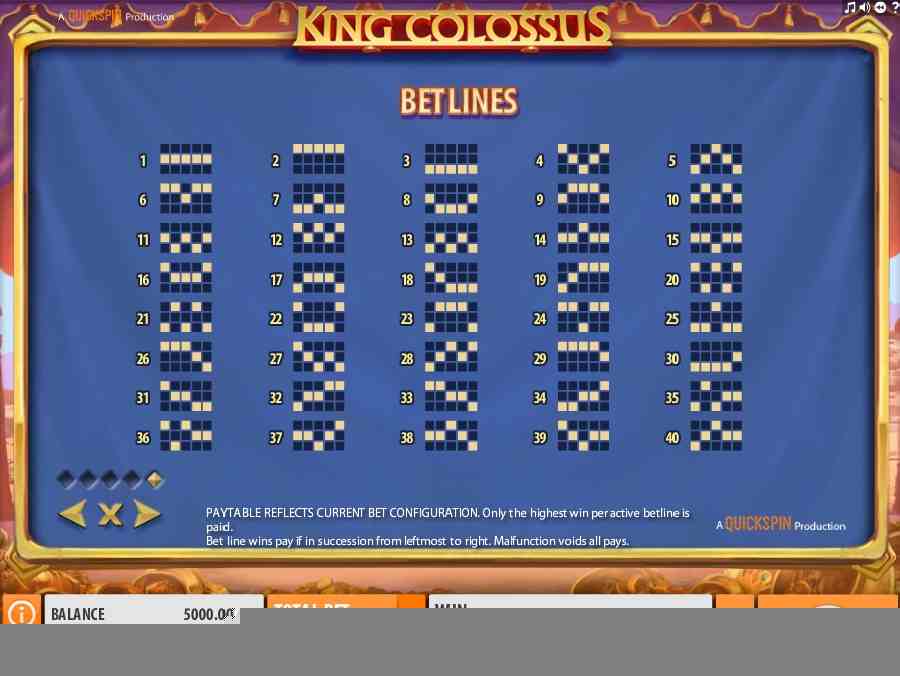 King Colossus is a non-progressive 5 reel, 3 row, 40 paylines video slot game from Quickspin, it has a King Colossus theme, The game features stacked symbols and a respins feature with locking symbols. and has a maximum jackpot win of $1500