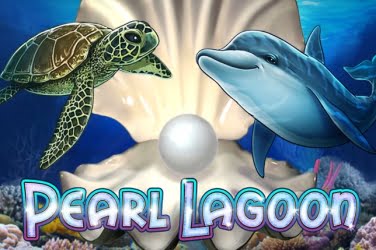 Play’n GO have created an Underwater theme to this latest release to their online casinos. Diving under the ocean to find the 5 reels players will see a bright coral bedding at the bottom of the screen along with the games Control Panel. Shimmering rays of sunlight break through the waves above as players embark on their underwater adventure.

Reeds separate the reels of the game and sharp colors have been used within its design. The tranquil setting is further enhanced by the relaxing tunes that play in the background throughout the game.

Players can enjoy the Pearl Lagoon slots game on various devices including Desktop, Tablet, and Mobile. This allows ease of play despite the size of screen or location due to the high-quality graphics that have been used.

The lowest paying symbols of 10 through to Ace have a chunky appearance and have been given different colors in their design. However, the sea creatures that are also used as symbols during the game are encased within a bubble of water. Players will find a Crab, a Seahorse, a Clown Fish, a Turtle, and a trio of Yellow Angel Fish which can all help to add to their final winning balance.

Wild – a Dolphin is a Wild symbol in the game. Besides the Scatter when this appears during play it can change others if there is the chance to create a winning payline. This along with the 2x Multiplier that is also awarded provides players with a higher cash amount to be claimed at the end of the game.

If players are lucky enough to locate 5x Dolphin Wild symbols during any spin of the game they will see 5000x their staked amount being added to the running balance that can be seen in the Control Panel at the bottom of the screen.

Scatter – this symbol is shown as the games Pearl and is used to activate the main Bonus Feature. When 3 or more of the Scatter is revealed then players will be awarded 15x Free Spins. Any winnings during this point of the game will also receive a 3x Multiplier to increase players jackpot even further.

While this Bonus Round is in play it can be re-triggered at any time. So if players are lucky enough they can take advantage of up to a maximum of 60 Free Spins along with the Multiplier additional feature that is on offer.

A Gamble Feature has been included in this Play’n GO slots release. Here players must predict the outcome of the turn of a card with the chance to either Double or Quadruple their final balance if they choose the correct color or suit that will be shown in the Pearl Lagoon slots game.

Coin sizes range from 0.01 to 0.25 in this 5 reels 20 winning pay line game. As a maximum of 5 coins can be placed on each line this means that wagers can be from 0.20 to 25.00 with every spin. Something that is proving popular with both high and low rollers who enjoy the Underwater theme.

Due to its ease of play this slots release is ideal for beginners as there is little to distract them from the base game. However, as the winning combinations can easily be located upon the reels even though the pay out’s may be low they do occur regularly.

Along with the base symbols, there is a Dolphin Wild and Pearl Scatter which can both be found across the game’s reels. They will reward players with a Free Spins Bonus Round and various Multipliers which can all help to increase the jackpot balance to be claimed.

In addition to this, the Gamble Feature is another way for players to maximize their initial wager. It is optional but can allow players to Double or even Quadruple the payout that they will finally receive.

Players are able to access the Auto Play Feature that has been made available at any point in the game. This means that the 5 reels can be set to spin automatically for a certain amount of times or until the wager is reached. It leaves the player in complete control while being less interactive with the Play N Go software with the chance of returning to cash out the balance to claim.

With a RTP of 96.98% and various Features to keep players entertained there is plenty of fun to be enjoyed with the Pearl Lagoon slots game. 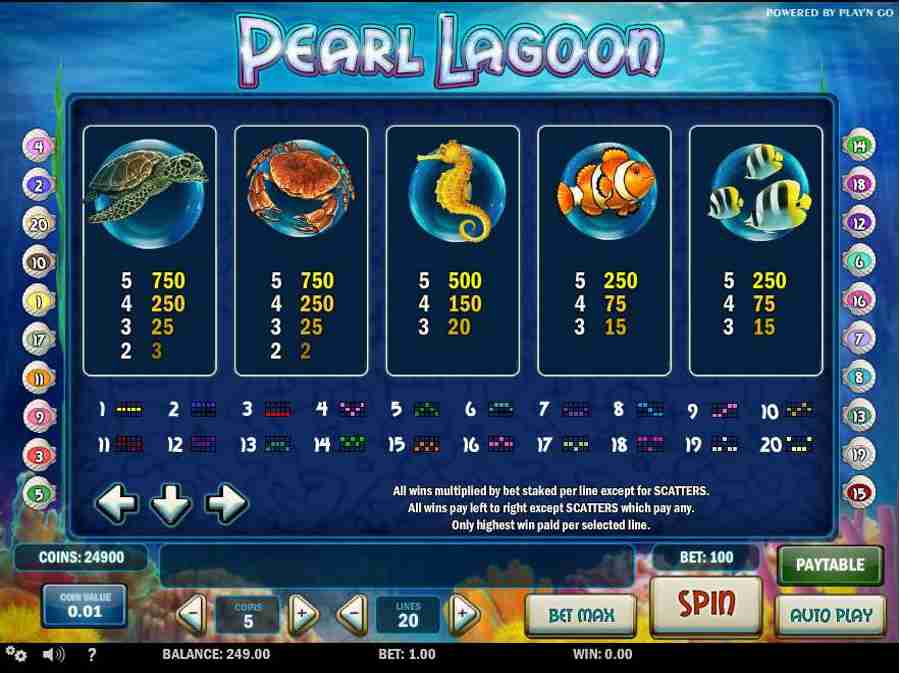 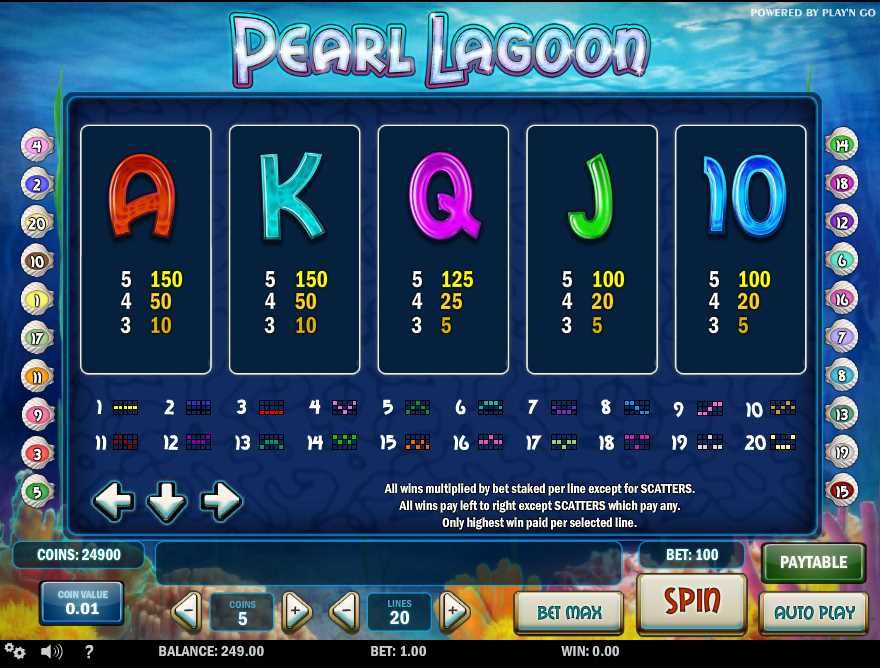 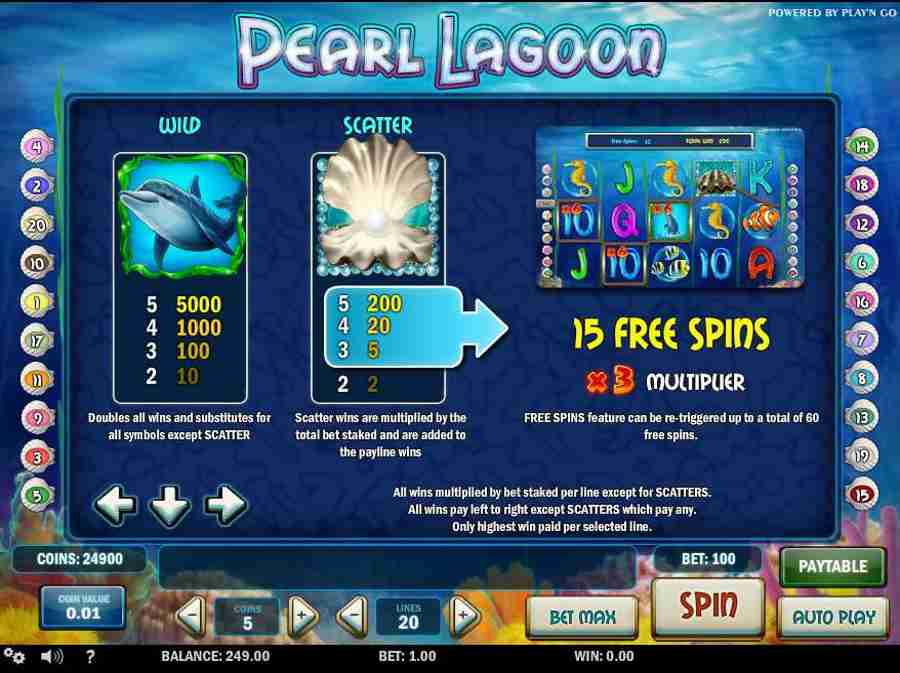 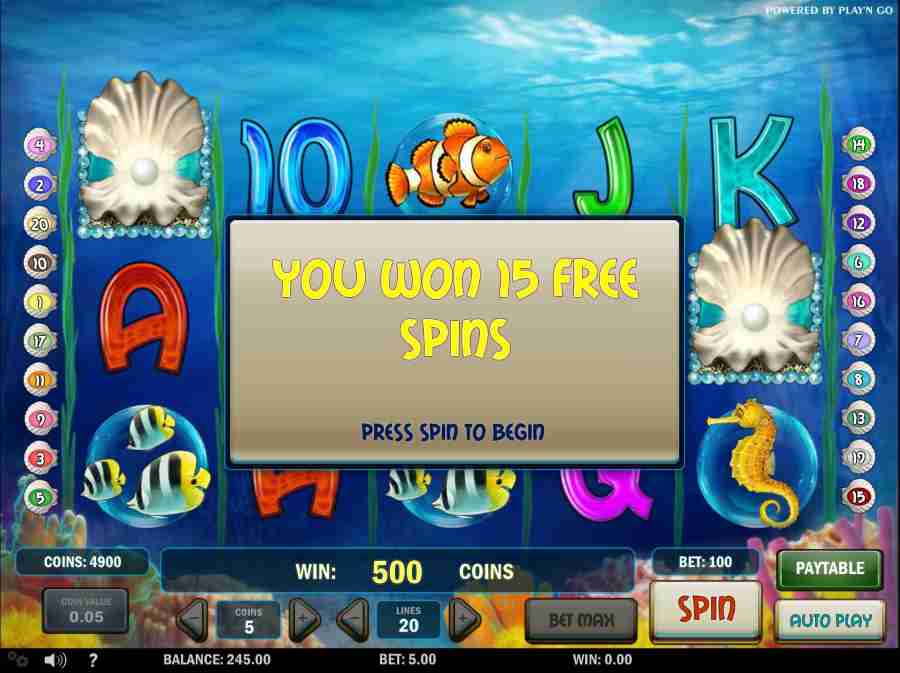 Pearl Lagoon is a non-progressive 5 reel 20 pay-line video slot machine game from Play’n GO, it has an Underwater theme, and comes with a wild symbol, scatters symbol, multiplayer, free spins and has a maximum jackpot win of $1200