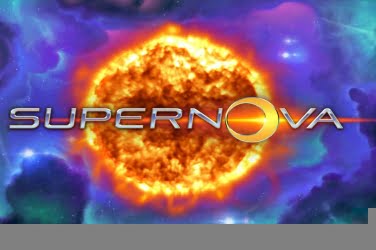 There is a Space theme to this online slots game just like the slot game from NetEnt Starburst or Thunderkick’s Flux, players can journey to the stars as they set the 5 reels to spin. They are set upon a multi-colored background of deep purples and blues with flickering stars lighting the screen. However if a winning combination is found players will find themselves traveling at warp speed with graphics similar to those used in Star Trek as the pay-out balance is added to their jackpot amount.

Quickspin have used a different design in the games format so there are a mix of reels to be found on the screen. The 1st 3 reels will reveal the games 27 structured paylines, while the other 2 reels will award players with an additional Multiplier if a win is found. All the colors that can be seen upon the screen have a hazy color in their appearance but the graphics are crisp and clear. There is also a soothing soundtrack which adds to the relaxing atmosphere of the game.

A Desktop, Tablet or Mobile device can be used to access the Supernova slots game which means that players can take advantage of all that is on offer despite their location. And with the additional Bonus of the Auto Play Feature it is also possible for players to set the reels to spin automatically if they need to be busy doing other things. So no matter how interactive they may be with the software players can shoot to the stars with the hope of landing to discover a profit has been added to their wager amount.

There are only 6 symbols used in the games format and these are shown as images of Atoms and Supernovas. They are all colored in delicate shades of Blue, Green and Orange and players will see them explode onto the screen when they are included in a winning payline.

Wild – a glowing “Wild” can be found across all the reels of this slots game. When this symbol is located it can change any image other than the Multipliers to provide players more opportunities to create a winning combination.

The additional 2 reels that are found within this game provide the only real feature to its format. This comes in the form of the Multipliers which are found there which offer players a 2x, 3x, 5x, or 10x increase on any winnings that can be claimed.

However a Multiplier does need to be uncovered on the 1st reel for players to have the chance to reveal a further Multiplier on the 2nd, and if the Black Hole symbol is landed upon this Bonus Feature will abruptly come to an end.

Players can wager as little as 0.20 in this slots game, however this can be raised to a maximum of 50.00 if their budget allows. And as with all casino releases the more that is originally staked will result in a higher amount to claim if any of the 27 winning combinations are found.

There are some regulars to Quickspin creations and those who prefer more of a return on their bet who may find this slots game rather dull. This could be due to the fact that the glowing Wild is the only bonus symbol and there are no Free Spins to take advantage of in this particular release.

Neither can players aim for a Progressive Jackpot amount, or enjoy a Gamble Feature or any Mini Games. The only chance that players have to increase their winnings by 100x is if they are lucky enough to land on 1 of the various nultipliers that can be found on the additional 2 reels to the right of the screen. Yet there are beginners to the world of online casinos and those who prefer less distractions during play that are finding the relaxing atmosphere enticing.

Players are also able to alter various aspects of the game by utilizing the Settings button which can be found on the screen. Here the speed in which the reels spin can be altered, as well as the volume of the sound effects and music. So the Supernova slots game can be enjoyed to the player’s personal preference in any of the Quickspin casinos that are found online. 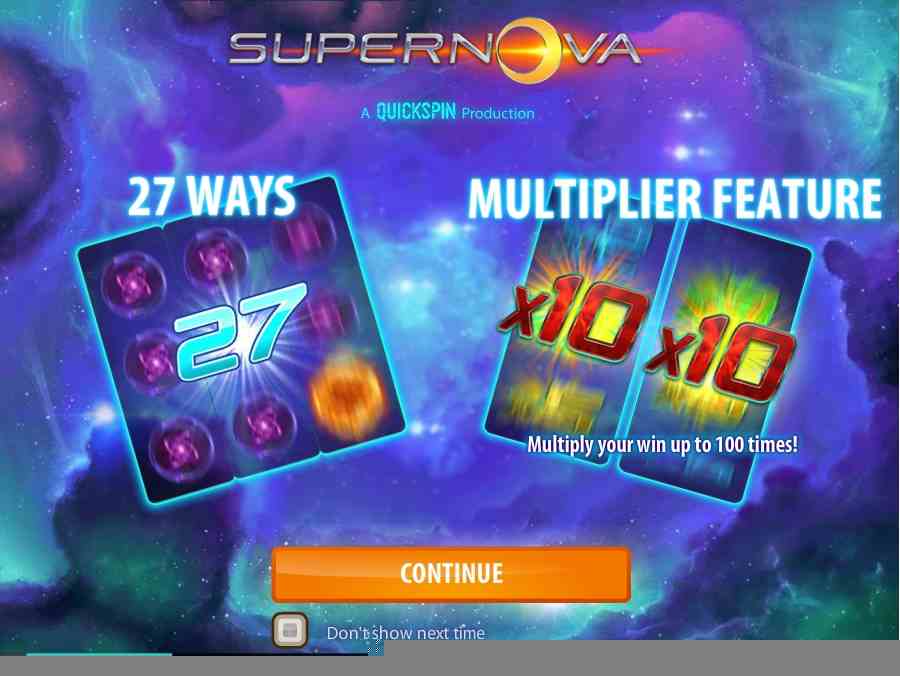 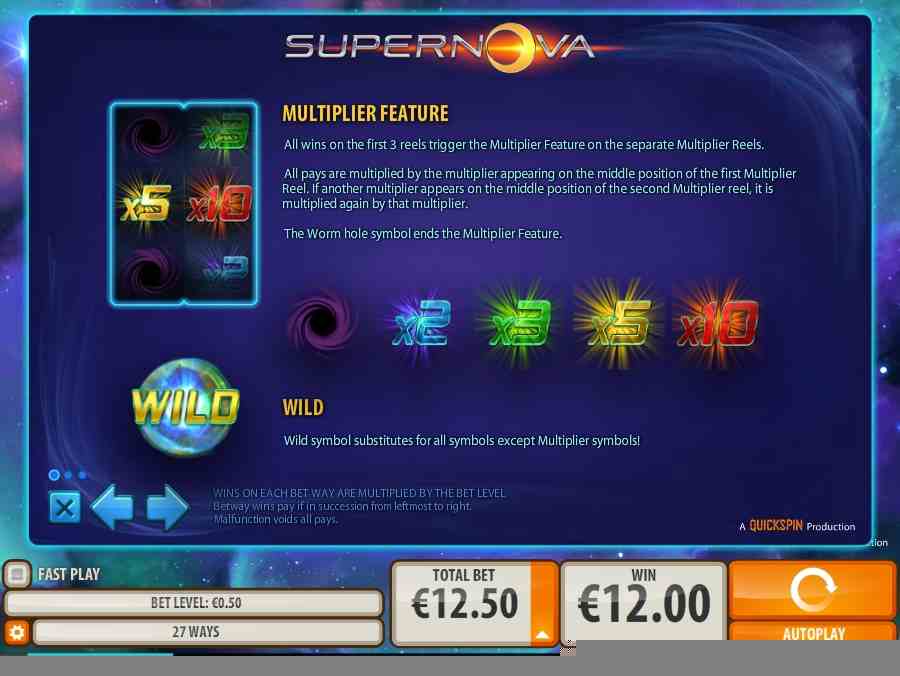 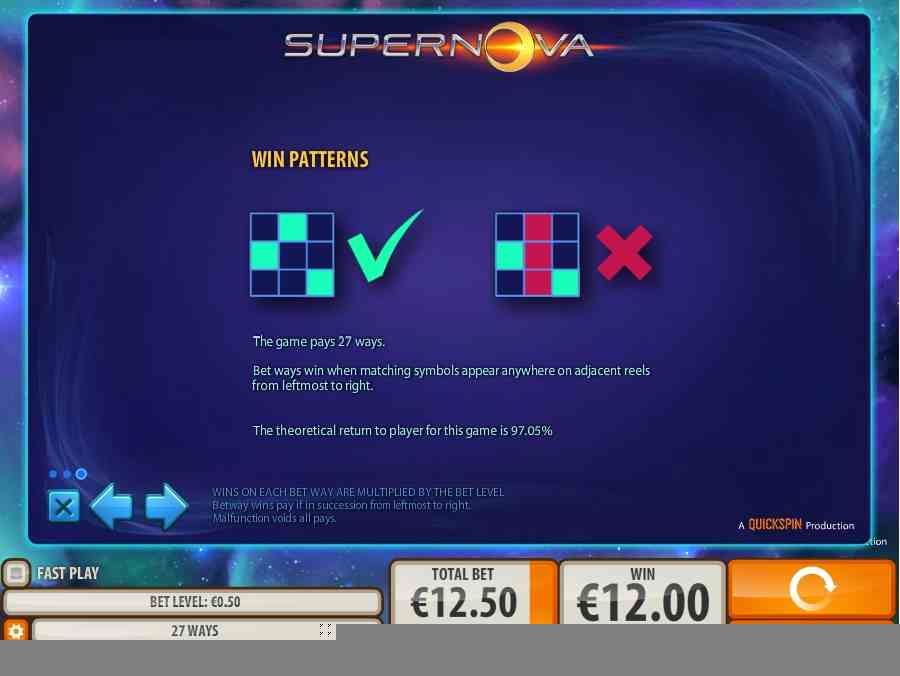 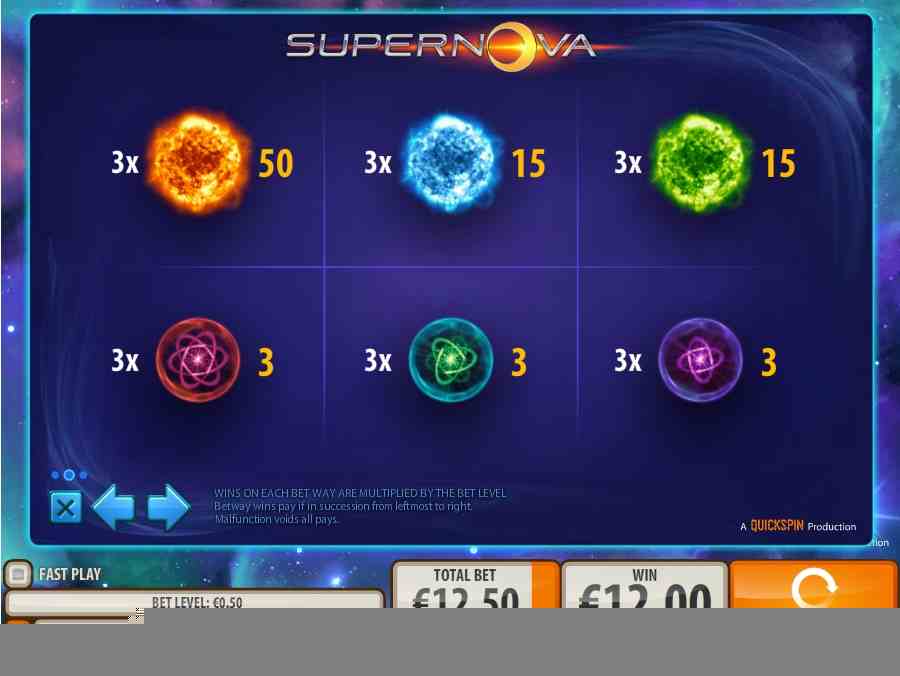 Supernova is a non-progressive 5 reel, 3 row, 27 paylines video slot game from Quickspin, it has a space theme, and the game features a glowing “Wild”,  various multipliers, and has a maximum jackpot win of $1000