I was recently in Vegas for New Years. I changed $100 to play blackjack at a $10 table, breaking my bets into five $20 bets. It was just me versus the dealer, pushed a couple of times, and I lost eight straight hands without winning one single hand (the last $20 was broken down into two $10 bets).

Here’s the part that keeps me up at night. It was a brand new six deck shoe. When the cards were dealt, the shoe appeared hot. Here’s the kicker, the dealer would always get better cards than me. If I pulled an 18, he’d pull a 19, If I pulled a 20, he’d pull a 21, etc.

I can’t help but wonder that if another player were to sit down, or if I played two hands, it would have changed the flow and help to my benefit, since all the cards being dealt were high.

Do you think that would have happened? Or would the dealer still be able to pull miraculous 21’s out of nowhere? Johnson T.

You didn’t go home a loser, Johnson, because you were swindled by some card shark. It was because your gambling timeline — the period you’re on the game — was limited to but a few hands of snapper. When your gambling timeline is limited to under a dozen hands of blackjack, and not to millions, thousands, or even hundreds of them, any percentage return, can, and will happen. The Law of Averages (aka the Law of Really BIG Numbers) did not have time to work during your brief tenure at the table.

Yes, definitely, you would have been dealt different cards possibly poles apart had you played two circles, and perhaps you could have won eight straight, but anytime you join a game, even if it’s fresh decks out of a shoe, you initiate your own personal sequence of hands, with the cards possibly going hot or cold from that moment forward.

The lesson here, Johnson, is that when you shorten your time on a table, don’t expect the Law of Averages to be working in your favor; half the time it won’t. Abysmal aberrations in gambling odds do happen, even in games that carry the smallest house edge, like blackjack with smart play.

My favorite video poker machine offers a double-up feature. It seems like an even-up bet to me. Is it? If it is, should I keep doubling up? Greg M.

For those outside the lingo, some video poker machines offer Double Up, the option of risking your current winning hand for a chance at doubling your money. Typically, it’s high/low against a machine-dealt playing card. This Double Up bet involves five cards being drawn face down. The house draws one card first and then player must choose one of the remaining four cards. The player who draws a higher card than that drawn by the house, is paid 1-to-1 on the wager. The Double Up offer continues after each win until the player begs to be excused or loses.

At first whiff, many players believe this is just another way for the casino to pillage your wallet. Not so, my friends. In fact, it ‘s actually one of the best bets in the casino. No house edge means a 50-50 chance of your doubling your money, if,  that is, ties are a push, and not a casino win. If ties are pushed, the game is fair, with an expected value of 100%. But if ties are considered a house win, then the Double Up bet has a house edge of 5.8%.

One other thing, Greg. Let’s say your favorite casino is philanthropic and pushes ties, giving you a 50-50 chance of winning. The wager can become heavily stacked against you if your goal is to string a dozen wins together.

As well, don’t plan on doubling as often as you wish. We all fantasize champagne wishes and caviar dreams, like winning 19 hands in a row with a $2.50 investment and becoming an instant millionaire. I’m sorry to say, just as in the table games where table limits apply, the compounding of money by parlaying winnings won’t work here either. Machines limit the doubling from as little as five times in a row to 10,000 coins returned ($2,500).

So the long and short of it, Greg, is to show some strong money management (cash control) and play this wager without going overboard. 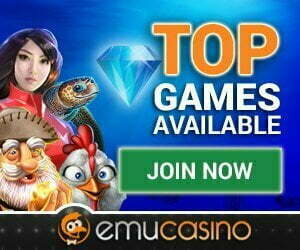