Learning Keno – Find Out how to Play This Game of Luck 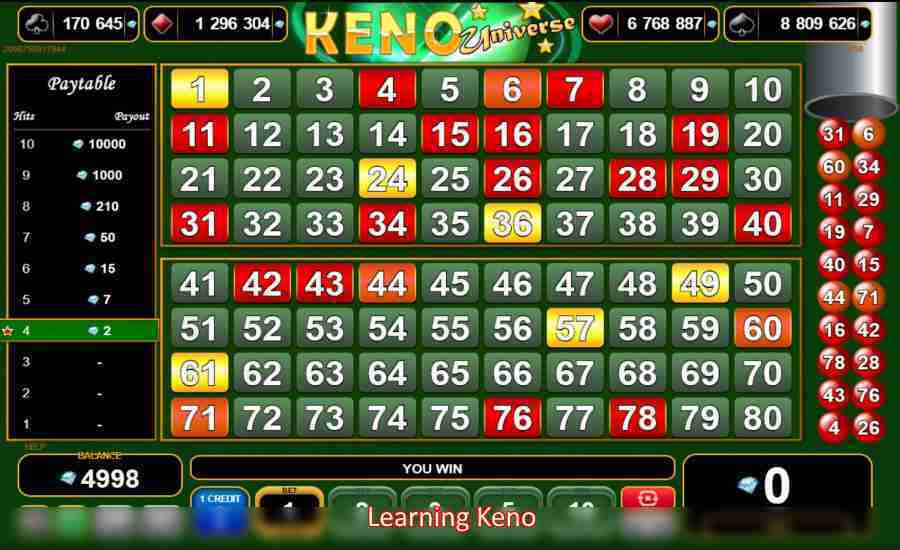 Being a gambling game, Keno is based on the odds that out of a total of 80 total numbers, the numbers chosen by the player will be drawn out. Any skills will not have any effect on the Keno game’s result because it is a game of pure luck comparable to lotteries. Keno players can decide how many games to play in a row with the same numbers, how much money to play per game and how many numbers to try to guess in each game.

Numbers (anywhere from one to 10) to be drawn randomly will be chosen by a Keno player. The amount of money that a Keno player wins is based on the chosen numbers which are actually drawn. For a Keno player to win, he must have at least half of his chosen numbers drawn in most cases. The Keno payback amount is dependent on the amount that matched his picks and how many numbers he chose.

On a Keno board, you will find 75 numbers. You can see them from 1 through 80 in numeric order. There are 20 numbers that are randomly picked in a game of Keno. A Keno player can choose a maximum of ten numbers per game. A Keno player can win the biggest possible prize in the Keno game if all the 10 numbers chosen are drawn. A Keno player can be allowed to pick all 20 numbers in a special jackpot in some individual casinos. But then, not all casinos has this kind of offer.

Where Is Keno Played

A variety of location can host a Keno game. Keno is offered by most casinos as a game to be played by gamblers. But you don’t always have to be in a casino if you want to play Keno. The game can be played at other establishments like bars because some states like Maryland have their lottery commission run the game. There are also websites offering free Keno versions if you want to play and practice without charge.

There are several different ways of playing Keno at casinos. A Keno booth is available in most casinos where players can get Keno forms to be filled in before the next game. Video game versions of Keno are also available in casinos. You can find them by themselves or as part of multi-game machines offering video gambling games like video blackjack, video roulette, slots, and video poker.

How To Fill Out A Keno Card

You can begin by choosing the number of Keno games you want to play in a row. Next thing to do is to decide on the amount of money to be spent on each game. Then the numbers must be selected. An “x” should be marked through the numbers that you have chosen on the Keno card. In a standard Keno, any number from 1-10 can be played. However, you are allowed to play up to 20 numbers in some casinos and video versions. You can either click the button to submit it in the video game or turn in your paper Keno card once this information is already filled out.

Were to play Keno?

Get up to C$ 800 Bonus on three deposits

Get up to $1000 New Player Bonus on three deposits

With 500 online casino games to choose from. The Ultimate Mobile Casino!