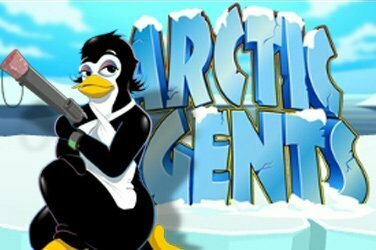 One can find a Crime theme to this Microgaming online slots game. Players will find various animals ready to solve and fight crime in the Arctic where they live. The reels are set before a landscape of ice plains and bergs with a bright blue sky above. All the symbols are large and the designers have used bright bold colors throughout.

Although the Arctic Agents slots game has cartoony looking animal characters, this doesn’t take anything from the enjoyment of this online casino offering from Microgaming.

The Control Panel is at the bottom of the screen in the Arctic Agents slots game. Small various colored buttons offer the players numerous betting options. While the wagered amount and jackpot balance are shown at the top of the games 5 reels.

Players are able to enjoy the fun animations which are included in the Arctic Agents slots game, along with the funky music which can be heard in the background. All elements to make this Microgaming online slots game appealing to anyone who wishes to help the animals fight against crime.

Players will find the main character of the Arctic Agents slots game depicted as a Penguin with a case saying “Top Secret”, and holding a pop-gun. He is also the Wild symbol used in the game and can change other symbols to create a winning pay-line with the addition of a 2x Multiplier.

His crime-fighting friends include another Penguin with a pop-gun, an angry looking Polar Bear wearing a Fez hat, and a Shark carrying various weapons. The villains in the Arctic Agents slots game are a pair of Arctic Foxes which can be seen carrying bags of cash.

Lower paying symbols are shown as Jack to Ace icons and are ornately colored in gold with various jewels.

A Scatter symbol is used in the Arctic Agents slots game and is shown by an Ice Pyramid. When 3 or more are found across the 5 reels then a Bonus Feature will be activated and the first thing the player must do is choose between the 5 main animal characters. Each one hides an award for the player to have more opportunities to increase their jackpot amount.

The Bonus Features included in Arctic Agent’s slots include:

The prize rewarded will depend on the Animal Mask which the player has chosen, but all can add significantly to the cash out balance.

An addition to this Feature is given should the Ice Pyramid Scatter appear on either the 1st or 5th reel of the Arctic Agents slots game players will receive a further Multiplier which can range from 2x to 50x the original wagered amount.

Many regulars to Microgaming casino games may find Arctic Agent’s slots too basic and simple. However, it is ideal for beginners or those who prefer the games slower pace.

There are few thrills to be had in the Arctic Agents slots game. Players may be disappointed to discover that there is no Progressive Jackpot, a Gamble Feature, or any Mini-Games included in this offering from Microgaming.

To compensate for this however the designers have created numerous chances for players to activate the Bonus Features of Free Spins and Multipliers. These can be found by locating at least 3 of the Ice Pyramid Scatter symbols and then opting for one of the five animals which are shown on a 2nd screen.

Players have the option to play the Arctic Agents slots game in Auto Mode. This enables the 5 reels to spin automatically for a set number of times. During this time players can leave the game to concentrate on other things in the hope of returning to a winning balance to claim.

Beginners to Microgaming online casinos will find the Arctic Agents slots game appealing. There are few distractions in the base game and few features to complicate play. Yet with the addition of Free Spins and Multipliers players can still see a return on their initial wagered amount. 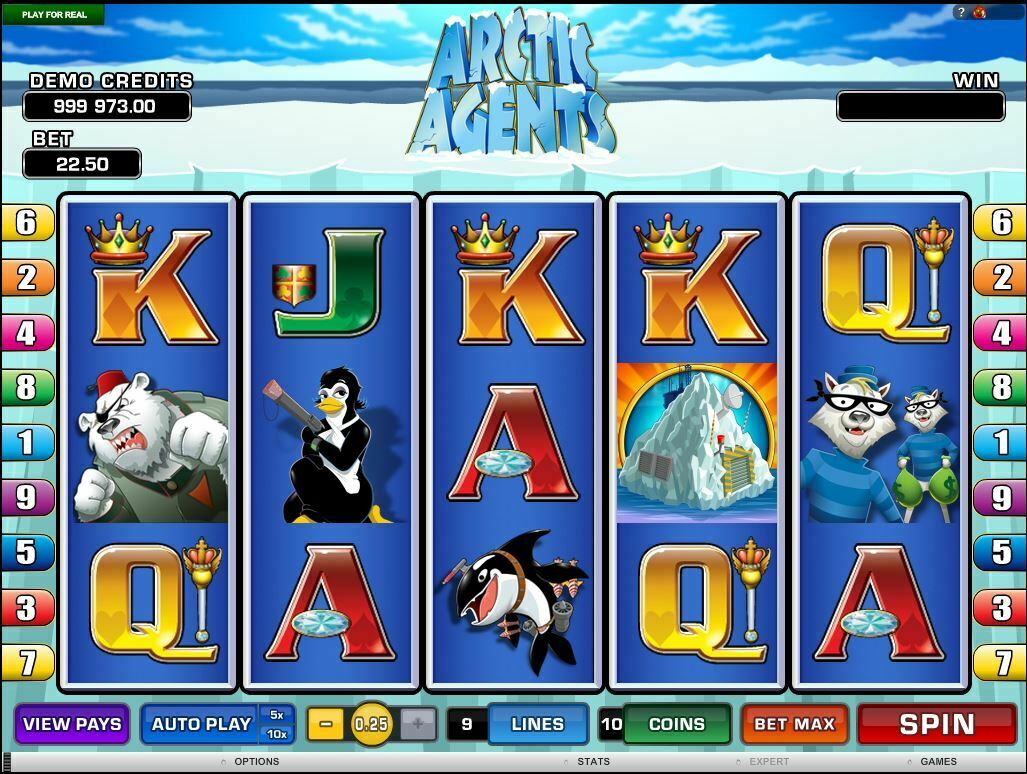 Arctic Agents is a non-progressive 5 reel 9-payline video slot machine from Microgaming, it has an animal crime theme, and comes with a wild symbol, scatters symbol, multiplier, free spins and has a maximum jackpot win of $3000