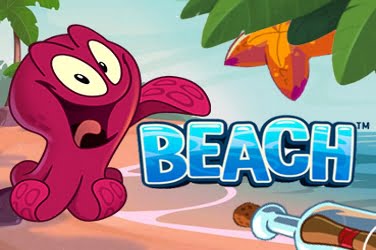 There are numerous online slots games that have a Beach theme, and this offering from Net Entertainment is no exception. However the detailed graphics and bright colors of the Beach slots game are enough to entice players of any level. The game has a cartoony touch to the fishy characters but they simply add to the fun of Beaches slots.

Players will find themselves looking down upon a sandy beach with a palm tree to the right. Pebbles are used as the buttons of the control panel at the bottom of the screen and players can clearly see their jackpot balance as it mounts throughout the game of Beaches slots.

In an unusual twist to Beaches slots, the 5 reels of the game don’t actually spin. Instead players will see waves of the ocean come ashore to leave the games symbols behind on the beach. With this in mind the Net Entertainment designers refer to each round of play as a Wave rather than a Spin.

The Beaches slots game has a relaxing feel during play, its soothing tunes adding to the tranquil atmosphere. Players can imagine themselves laying upon a sandy beach beneath a warm summer’s sun as they enjoy this online slots game created by Net Entertainment.

The Beaches slots game boasts 2 different Wilds, the 1st of which is awarded with the Starfish and Crab standard Wild symbol. This symbol can be found on the 1st, 2nd, 4th, and 5th reels of the game and are able to change any other icon apart from the 2nd Bonus Wild and the Scatter.

An Octopus is used as the 2nd Bonus Wild symbol, however players can only find it upon the 3rd reel of the Beaches slots game. The Octopus Bonus Wild is also able to change other symbols across the reels of the game, again apart from the standard Wild or the Scatter icons.

Should players reveal the Octopus Wild they will see it change 2 other symbols on the 2nd and 4th reel in the hope of creating a higher winning combination. An added Bonus to this feature is that if there is no higher pay out available the Octopus Wild will remain upon the reel until one becomes available. This provides players with even more chances to increase their jackpot amount.

Once a winning combination is found using the Octopus Bonus Wild players will also receive a 2x Multiplier. A further Feature which makes the Beaches slots game popular with players from around the globe.

A Bottle is used as the Scatter symbol in the Beaches slots game. It can be washed ashore onto any of the 5 reels of the game but should 3 or more be revealed then the Free Waves Bonus Round is activated.

The amount of Free Waves that are awarded to the player depends on the amount of Bottle Scatters that were found across the reels. For 3 Scatters the player will be given 8x Free Waves. This increases to 16x and then 24x respectively should 4 or 5 Scatters appear.

Standard paying symbols which are found in the Beaches slots game are also in keeping with the theme of the game. They include a Treasure Chest, a Starfish, a Shellfish, a Pearl in its Oyster Shell, and a Seashell.

Smooth Pebbles have been used as the smallest pay out icons, with the 10 through to Ace symbols etched upon them.

There are players of all levels enjoying the benefits that the Beaches slots game provides. Low rollers find the 0.01 minimum wager appealing, while those who prefer to maximize on their wager can place up to 1.00 on any of the 20 winning paylines which are available.

As it is necessary to place a wager on all the 20 winning paylines before the game of Beaches slots can begin, it means that betting amounts can range from just 0.20 but up to 200.00 on each Wave.

The highest pay out available in the base game is awarded when the 5 reels are filled with the Treasure Chest symbol. Here the player will have a total of 2000 coins added to their jackpot figure which they can view at the bottom of the screen.

It is the relaxing atmosphere which has been created in this release from Net Entertainment. Not only can players feel as if they are relaxing upon a Beach with sounds of the waves and seagulls in the background, they are also able to benefit from all the additional Bonus Features that the Beaches slots game has on offer. 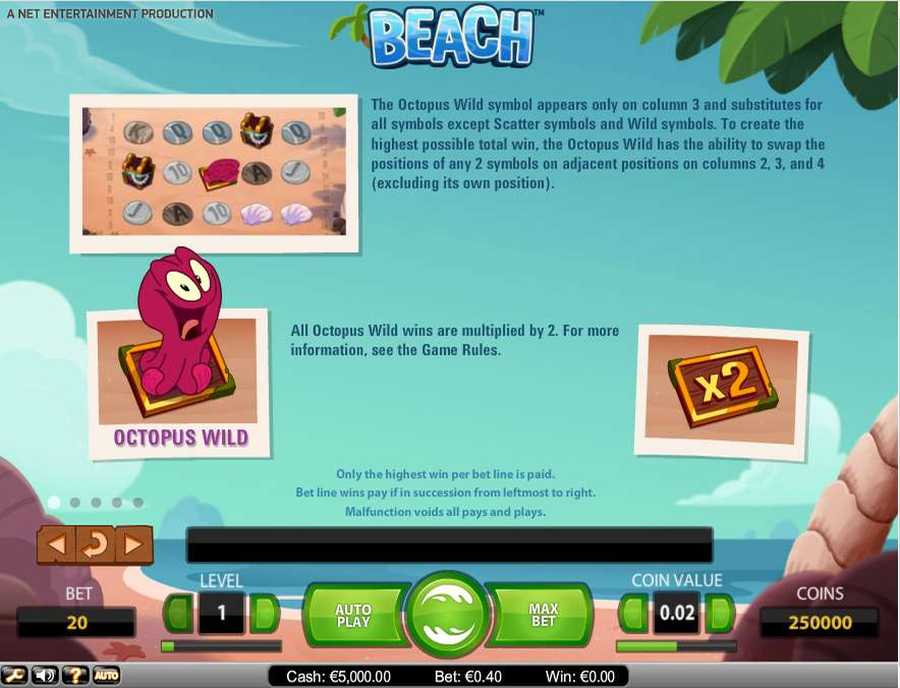 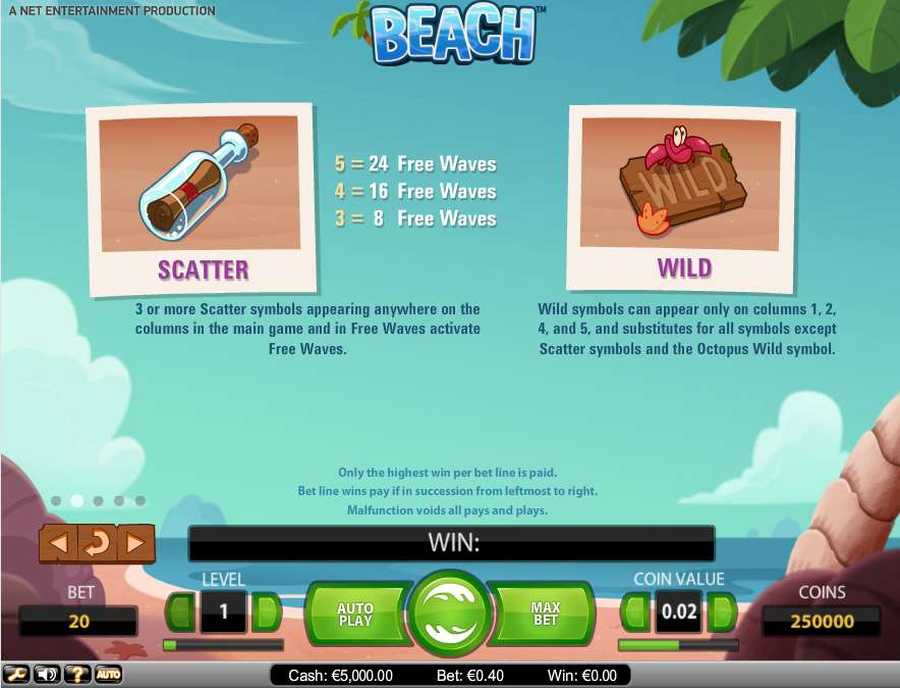 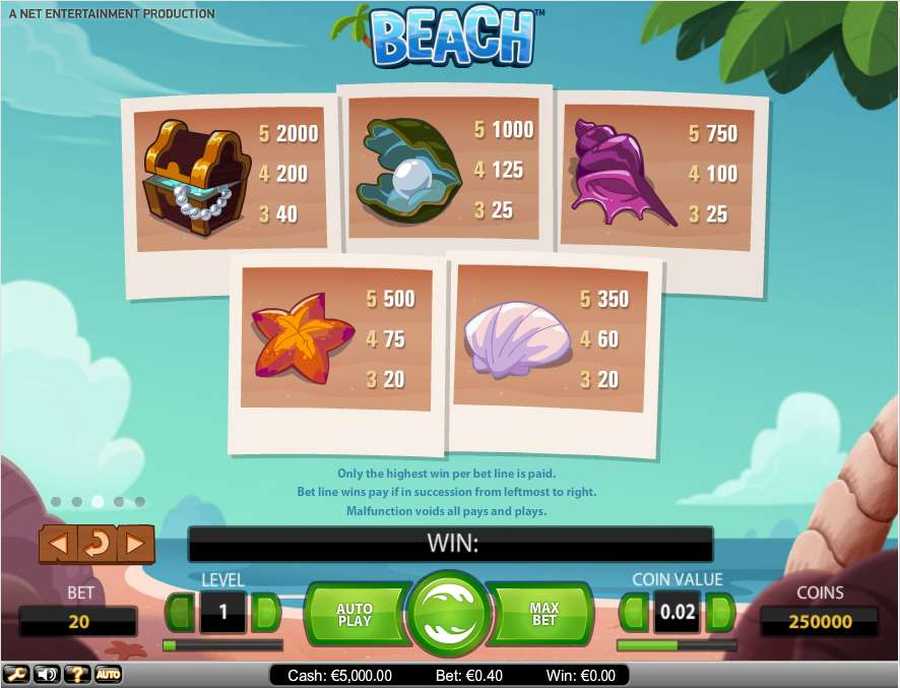 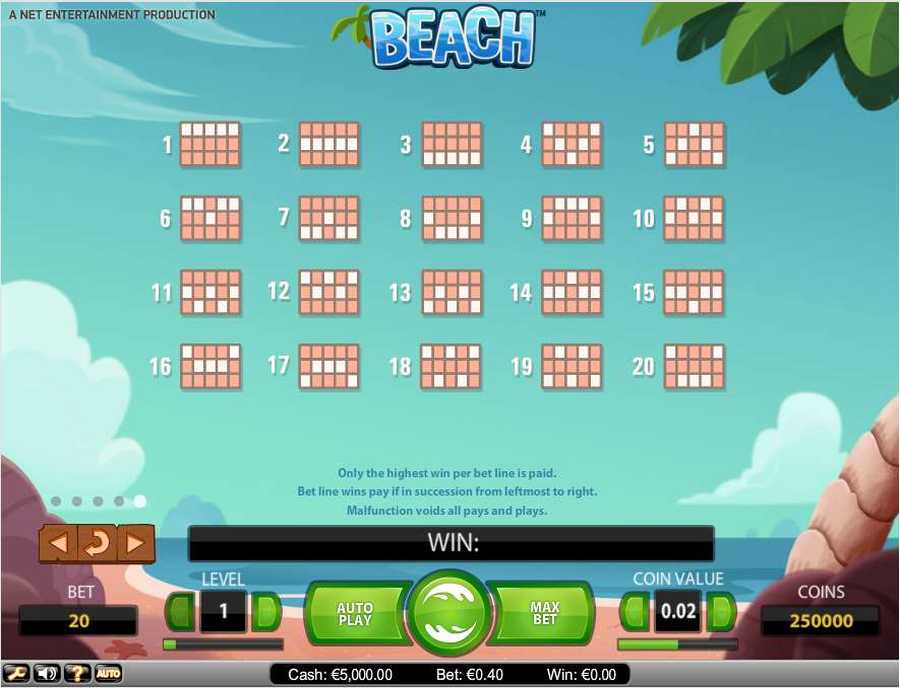 Beach is a non-progressive 5 reel 20 paylines video slots machine from net entertainment, it has a sandy beach theme, and comes with a multiplier, wild symbol, scatter symbol, free spins and has a maximum jackpot win of $40000