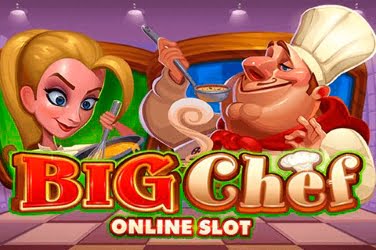 Released May 2015, Big Chef slots is the latest addition to the many Microgaming online casinos. As the name suggests it has a food theme, being set in a posh French restaurant. Bright purple light illuminate the background, while the reels are spun within a menu setting.

The Big Chef slots game has 5 reels, and 15 winning paylines. It has been designed in a cartoon style and is sure to get players mouths watering with the symbols they have used. The highest paying symbol is depicted as the male Head Chef himself. There is also a female Soux Chef, a Kitchen Hand, and a Waiter.

Lower paying symbols are the meals that can be found upon the reels of the Big Chef slots game. These include a tender Steak, a Crab Salad, a whole roast Chicken, and a bowl of Soup.

The Big Chef Logo is used as the Wild in the game, along with a two Scatters. The first scatter is a Cloche Serving Plate, the second being a Blue Menu. Both Scatters offer different features that can help to increase the player’s final pay-out amount.

As expected with Microgaming slots the Big Chef Logo is the Wild symbol within the game. When these appear upon the 5 reels of the game they can change any symbol other than the Scatters. This can help to create more winning paylines, thus increasing the total pay-out.

There are two Scatters in the Big Chef slots game. The first will appear on reel 5 of the game, and when this occurs the player is awarded 1x Free Spin. So it is the second Scatter which players will look to find. When 3 or more of the Blue Menu Scatter appears during game play, the Free Spins Bonus Round is triggered. This provides 10x spins, along with a 2x Multiplier on all winnings.

Microgaming have added an additional Feature to the Big Chef slots game in the form of Rising Wilds. These are activated by both of the Scatters in the game. If a Wild is located during the Free Spins, they begin rising up the reel leaving a trial behind them. This means more chances of creating winning combinations.

( Now available on mobile version ) Players can wager up to 150 coins on any spin during the Big Chef slots game. The lowest bet can be $0.15, which rises to $7.50 as a set maximum. This makes this game popular with both high and low rollers, and players of all levels.

With 5 reels and 15 winning paylines there are plenty of opportunity to add to the final pay-out amount. Players can take advantage of the Wilds that are stacked upon the reels of the Big Chef slots game. They can create more winning combinations to be added to the jackpot that will be awarded.

With two Scatters hidden among the reels of this Microgaming online casino slots game, this can generate even higher winnings. By locating Wilds during this period of play the Rising Wilds Feature is activated. This is when the player can win further as they climb the reels to the top and create more paylines.

There is no progressive jackpot with the Big Chef slots game, yet this doesn’t prevent this Microgaming online casino game being popular among players from all around the world.

It is possible to play the Big Chef slots game in Expert Mode. This means that the player can set the reels to spin automatically, either for a total of 5x or 10x. Alternatively the game can be set to spin until the full wagered amount is reached.

With its cartoon style and fun characters, this restaurant themed game can be enjoyed by players of all levels. Taking advantage of the Bonus Features to increase their winnings even further as they listen to the cheesy French Bistro tunes that play in the background. 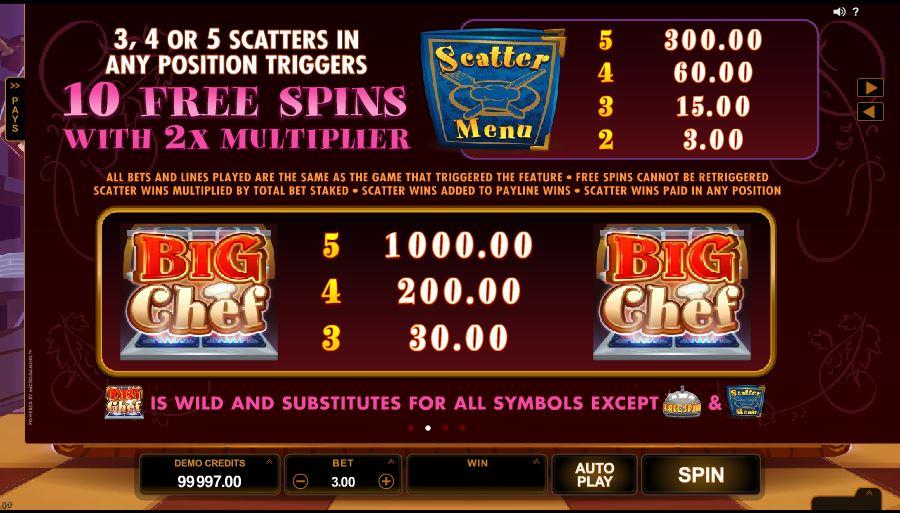 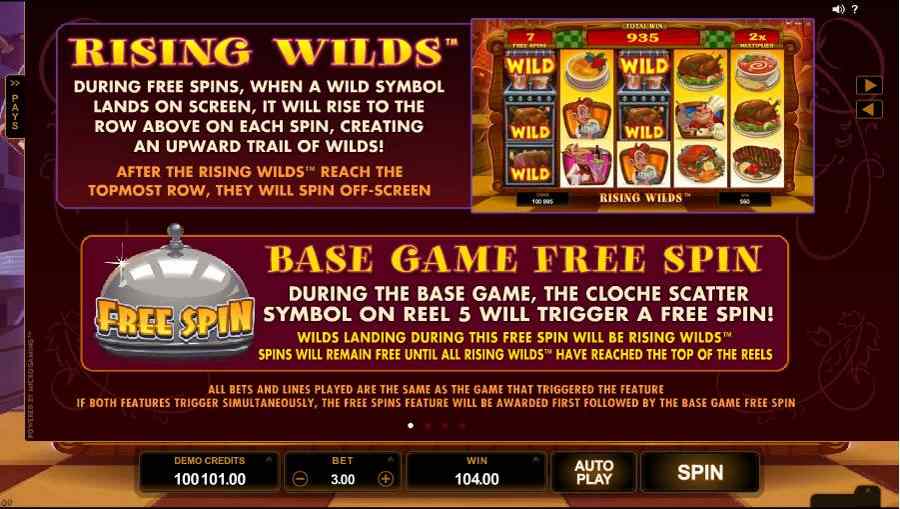 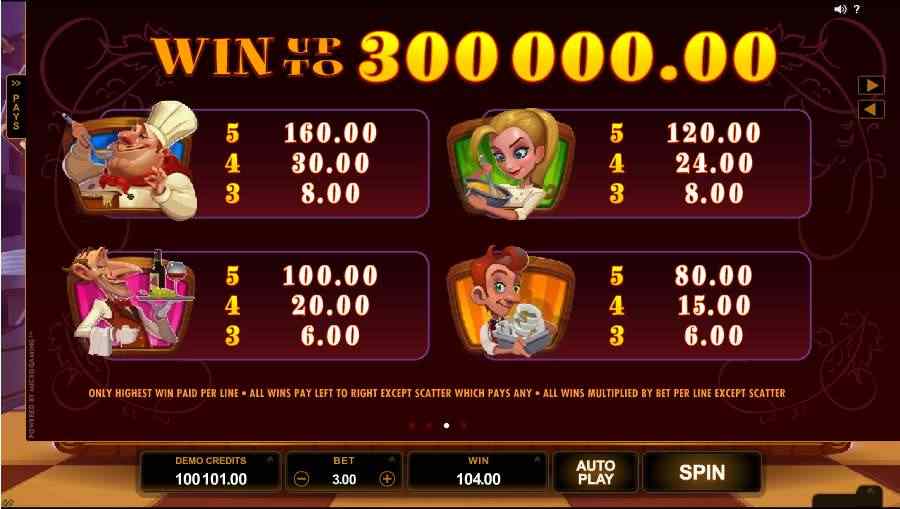 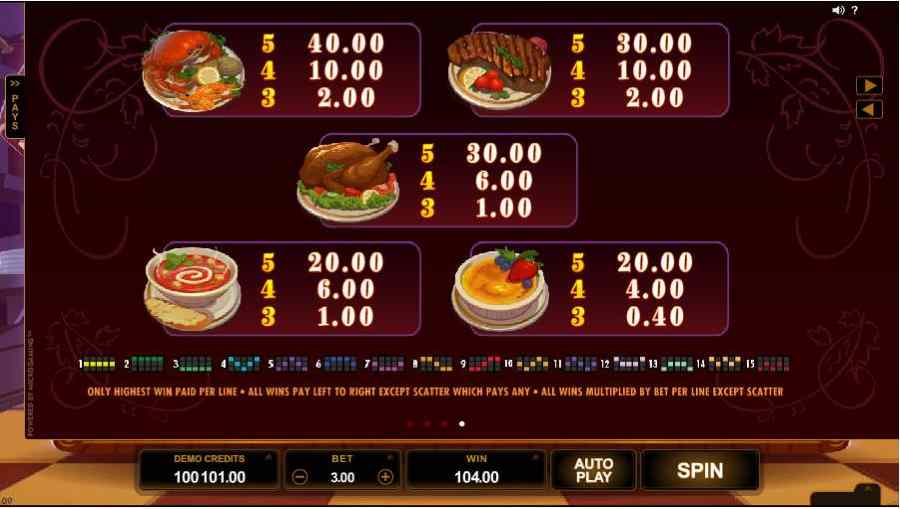 Big Chef is a non-progressive 5 reel 15 pay lines video slot machine from microgaming, it has a French restaurant theme, and comes with a wild symbol, multiplier, scatter symbol, and has a maximum jackpot win of $75 000