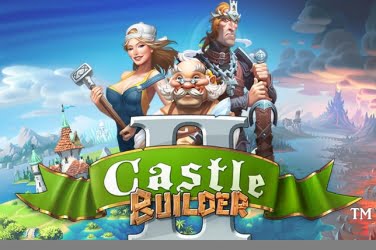 After its predecessor won the EGR Award for Game of the Year in 2013 Microgaming and Rabcat have collaborated together again to create this stunning sequel. just like the original Castle Builder players can return to the rolling countryside of the Medieval town of New Forana. Here King Lornquer III will reward players as they advance through the game building castles and helping to marry off his daughters.

The format is considered to be “social gaming” where players can choose their character, each of which offers various interactive features and Bonus elements throughout this slots story line. Its 5 reels are set to the right of the screen within the turreted wall of a Castle. All the graphics that have been used are highly detailed and the striking sound effects adds to the Medieval theme.

This is a slots game that will keep players entertained for hours as they create their own kingdom with the help of the 15 winning combinations that can be found across the reels. And as it can be enjoyed whether on a Desktop, Tablet or Mobile device there are players around the globe who are eagerly anticipating the Castle Builder II slots games release in April 2017.

As it is the players aim to Build Castles in this slots game the materials that they will need are used as symbols upon the reels. These include such things as Wood, Granite and Bricks and all must be collected as the game progresses.

The kingdom has other hidden treasures that players can also find throughout the game such as a Ring, a Gold Bar, and a Chest. However the largest jackpot in the base game is rewarded when 5x Crown symbols are spun. Now the player will benefit from 50x their stake being added to their jackpot balance.

Wild – players need to find the King symbol during the game to take advantage of more chances to win. As it can substitute the Basic Symbols there are plenty of additional pay lines that can be found.
Scatter – this “Scatter” symbol rewards players with a Free Spins Bonus Round when 3 or more land on the reels.

Free Spins – 10, 15, or 20x Free Spins can be used if 3, 4 or 5 Scatter symbols are revealed during play. This gives players the perfect opportunity to create more winning combinations while adding to their building materials.

Cup Challenge – the game begins at Bronze level whereby the players need 6x building items to complete the pallet at the left of the screen before a block is created. For players to get to move through this Feature they need to complete 9 Kingdoms. Then they can receive the Silver cup which will then progress to Gold and Platinum as the player completes the game. However the amount of items required to fill the pallet will also increase with each Cup that the player is awarded. It will become 9x, 12x and 15x respectively and although the levels will prove harder to reach the prize amounts also get higher.

This is quite a complex game and so some players may need to use a free play mode while they get a feel of its interactive format and design. And the first thing to decide is which Avatar to choose before they can take on their quest. In the beginning there is just Sam and Mandy who are there to help guide players along. But should they have already once completed the game a third character called Igor is also on hand.

Next players must select the amount they wish to wager. This will begin at just 0.15 so that all 15 winning pay lines are in play before the 5 reels are spun.

Now players need to locate the needed materials so that they can fill the pallet which will in then turn into a Building Block. Each time this is done it is added to the meter that can be seen at the top left of the screen, and once this is filled construction can begin.

Once a Castle has been built a Royal Wedding is held and all the Princess admirers will come to call. The higher the level that the player is at will decide how many male suitors appear to woe her. And it is now down to the player to choose who she will marry to then receive a Bonus Prize from the King depending on who they select.

Although there has been an Auto Play Feature included in the game due to the variety of features and the smoothness of play it is sure to keep players captivated. There are 15 different levels, 75 Castles to be built and over 300 characters to meet during this Medieval journey.

The designers have created a game that will keep players glued to their screen for hours in Castle Builder II and they are sure to enjoy the thrill of all the different interactive Features as they move through the Kingdoms to create their own unique world.

Castle Builder II is a 5 reel, 3 row, 15 payline video slot game from Rabcat. it has a Medieval Fairy tale slot theme and the game features a Expanding Wild Feature, Free Spins, Wild Symbols, Bonus Game. and has a maximum jackpot win of N/A